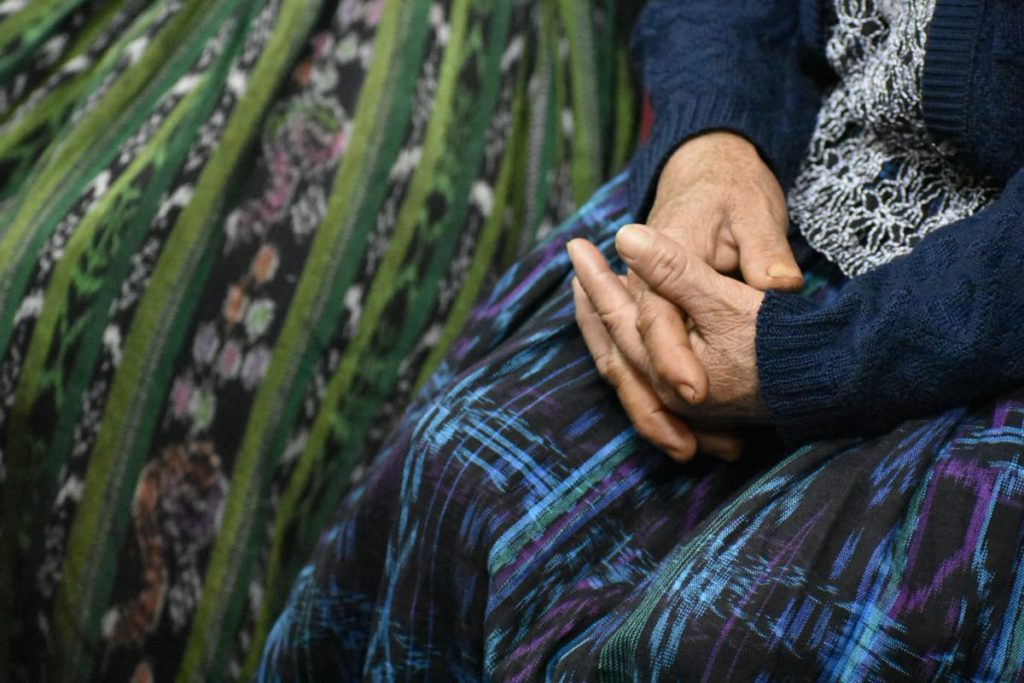 A survivor of sexual violence waits outside the courtroom for the Military Zone 21 case. Photo Credit: CALDH

This article is about Indigenous women seeking justice for systematic sexual violence that was used as a tool of war against them. It contains several explicit descriptions of sexual violence.

“If we can’t understand what happened in the past, we cannot understand what we are living today. And sexual violence is part of that.” Esteban Celada, lawyer for Center for Human Rights Legal Action (CALDH)

Survivors, lawyers, ancestral authorities, women’s rights groups, and international accompaniment organizations gathered at the Femicide Court on Friday, December 14, filling the courtroom and the hallways outside. The appeals hearing was part of a final effort to call on the Guatemalan justice system to acknowledge and prosecute the crimes against humanity committed by the Guatemalan military in the Military Zone 21 case. Plaintiffs specifically appealed to the Femicide Court to rule that military officials from the Military Zone 21 trial should be judged for crimes of sexual violence. 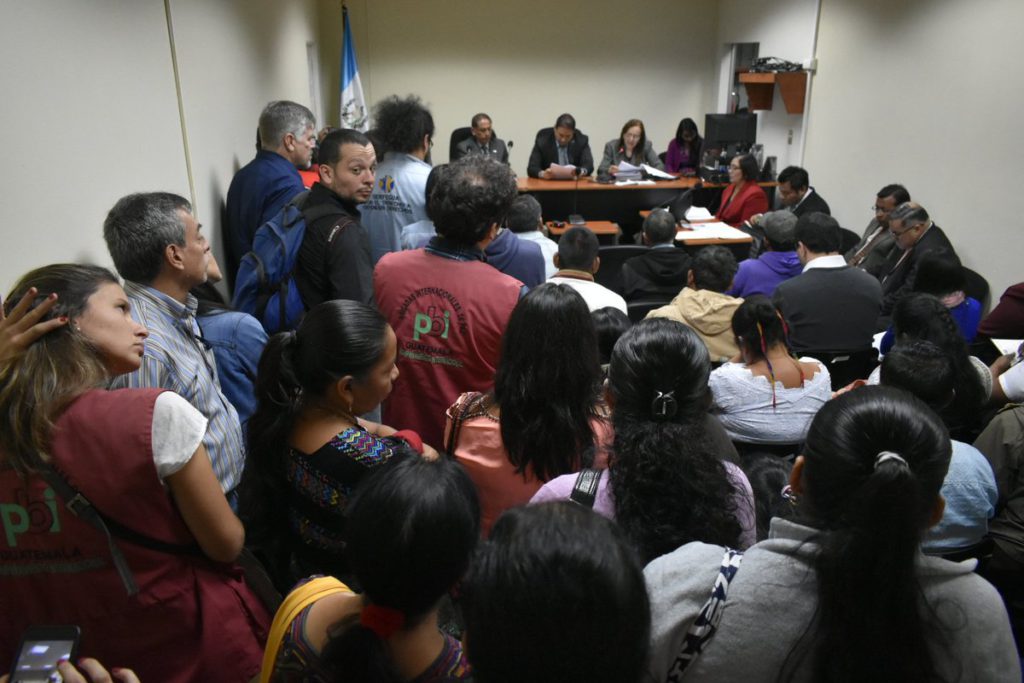 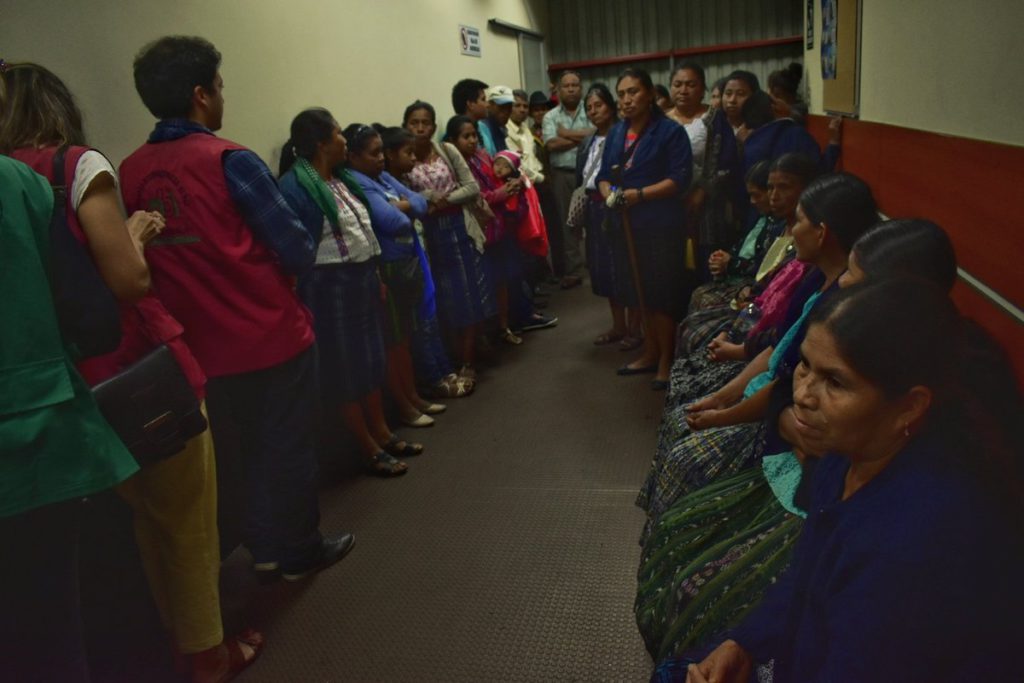 Hallway outside the courtroom is full in Military Zone 21 Case. Photo Credit: CALDH

The Military Zone 21 case, also known as CREOMPAZ, is the largest known case of forced disappearance in all of Latin America. Charges were filed against 11 retired military officers in January 2016. Later that year, Judge Claudette Domínguez, presiding judge of High-Risk Crimes Court “B,” ruled that eight high-ranking former military officials would go to trial. Nonetheless, in her decision, Domínguez excluded 80% of witness testimony, accepting only 29 of the 154 witnesses proposed by the Public Prosecutor’s office. Among the witnesses excluded from the case were all of the survivors of sexual violence.

A year and a half after Domínguez’s decision, plaintiffs argued an appeal before Guatemala’s specialized Femicide Court. The Femicide Court is the first of its kind in the world, providing a gender lens to judicial decisions on violence against women in Guatemala. Plaintiffs appealed to this court, noting the gendered discrimination in Domínguez’s decision to exclude all the survivors of sexual violence from presenting their testimony against the eight officers on trial.

During the proceedings, lawyers presented audio recordings from the hearings held in Domínguez’s court. Witnesses, their identities protected, described their experiences of sexual violence at the hands of the military. Women and girls were subjected to repeated, collective rape and humiliation, in front of their families and communities. One woman was eight-months pregnant when she was raped in front of her small children. A grandmother described seeing her adolescent granddaughter unable to move for pain the day after. Another woman, who at the time was a young girl, recalled the soldiers asking her if she liked seeing the violence being committed against her mother.

The military’s gender-based violence damaged families and communities. Family members were traumatized by the violence committed against their loved ones, violence they were powerless to stop. Many of the women survived the sexual violence, only to see the military disappear their husbands and children shortly thereafter; others were themselves disappeared. Indeed, survivors remain committed to telling their story, ensure that the military’s policy of erasure failed.

Despite being presented with the brutality of what these women and girls survived, Domínguez refused to rule on their testimonies and sent no one to trial for these crimes. In the Femicide Court, lawyers noted that all of the survivors had already waited more than thirty years for the courts to even consider their testimony. The exclusion of testimony on sexual violence is the latest step in a pattern of impunity in the case. Plaintiffs reminded the court that by disregarding survivor testimony about sexual violence, courts revictimize and invisibilize the women and girls subjected to these crimes against humanity, depriving them of their right to access justice.

Lawyers also questioned Domínguez’s decision to consider crimes individually. The lawyers noted international and national precedent that Domínguez defied in her decision. They noted Inter-American Court of Human Rights’ decisions which established lower standards of proof in accepting testimony in the pre-trial phase in cases regarding crimes against humanity, where a stricter standard of proof would deny victims access to justice.

Lawyers also references historic national cases brought by survivors, including the Ixil Genocide Case and the Sepur Zarco case. These cases set important precedents, as courts considered evidence within the larger context of state violence in which crimes against humanity were committed. As lawyers noted, the forced disappearances and crimes against humanity found in the Military Zone 21 case didn’t happen in a vacuum and must be considered in the context of the genocides, crimes against humanity, and systematic sexual violence that the military committed against Indigenous communities specifically focused in Alta and Baja Verapaz, Chimaltenango, Huehuetenango, and Quiché.

Community members from Chicoyogüito listen outside the courtroom.

Survivor organizations have long named that one of their goals in fighting impunity for the crimes of the past is to ensure that those same crimes are never committed again. This vision holds true for the survivors of sexual violence in the Military Zone 21 case.

Guatemala currently has one of the highest rates of femicide in the world. There is systemic impunity for violence against women; extremely low percentages of crimes are ever prosecuted, much less assigned guilty sentences. In a press conference prior to Friday’s hearing, plaintiffs stated that “history has left the voices of women outside…[but that this trial] is the opportunity for everyone to hear and understand how violence was lived by women during the internal armed conflict.” Lawyer Esteban Celada also noted that “when they hurt one woman, when they discriminate against one woman, or violate one woman’s rights, they violate the rights of all women.” By excluding sexual violence survivors from access to justice, plaintiffs argued that the Guatemalan judicial system damages all women’s expectations of justice in the face of sexual violence.

Guatemala’s Femicide Court now has the opportunity to stand against that impunity. The court’s decision may open the door for survivors of sexual violence to achieve a sentence for the violence they faced – violence carried out as an expression of race- and gender-based hatred, violence that tore lives, families, and communities apart.

No matter the court’s decision, survivor organizations will continue to tell the stories of their survival, lift up historical memory, demand justice and reparations, and call for an end to impunity.

NISGUA partners with and accompanies several of the legal and plaintiff organizations involved in the Miliatry Zone 21 case, including CALDH, Association of Family Members of the Detained-Disappeared Guatemala (FAMDEGUA), and Association for the Integral Development of the Victims of the Violence, Maya Achí (ADIVIMA). Donate now to support our work with these and other organizations fighting for justice for genocide, sexual violence, and crimes against humanity. Follow our ongoing coverage of the Military Zone 21 case and survivors’ work for justice on Facebook and Twitter. 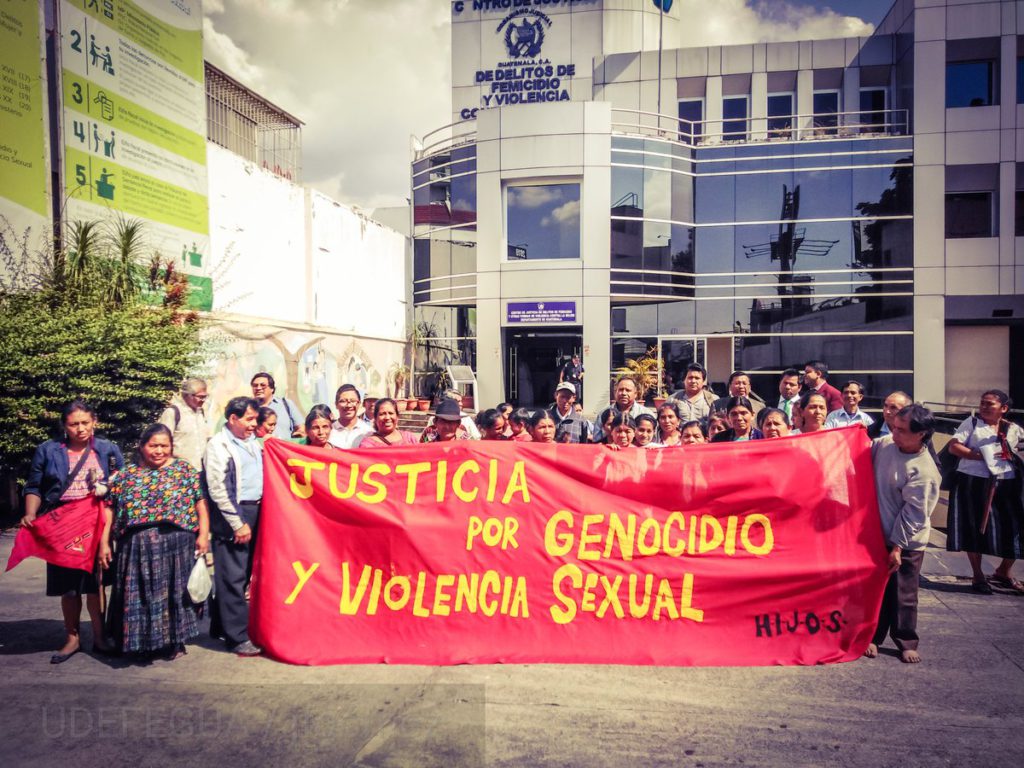