During our fall tour, “Guatemalan women healing towards justice,” community psychologist Maudi Tzay met with hundreds of students, activists, psychologists, and healers from across the U.S. to speak about the groundbreaking case of Sepur Zarco and the critical work of Guatemalan feminist organizations to create spaces for healing grounded in justice.

Maudi is a Kachiquel community psychologist from Guatemala whose work with ECAP – the Community Studies and Psychosocial Action Team – brings healing to movements for social justice and human rights. Since 2014, she has provided psychosocial support to women from the community of Sepur Zarco, who survived state-sanctioned rape and sexual slavery in the 1980s under a U.S.-backed military dictatorship. Earlier this year, the survivors achieved a major legal victory when, for the first time in the Americas, sexual slavery was successfully prosecuted as a crime against humanity in a domestic court.

The 20-day tour brought together more than 900 people during 26 events in the Southwest and West Coast. Through a variety of educational events and exchanges, the tour drew important links between militarism and sexual violence in local and global contexts, cultivating a more intersectional and global analysis of gender-based violence while strengthening connections across movements for gender justice. The tour celebrated the legal victory for the survivors of Sepur Zarco and the movements and organizations that supported them, while emphasizing the importance of transcending legal strategy to facilitate processes for healing, resistance, and resilience which are inextricable from justice. 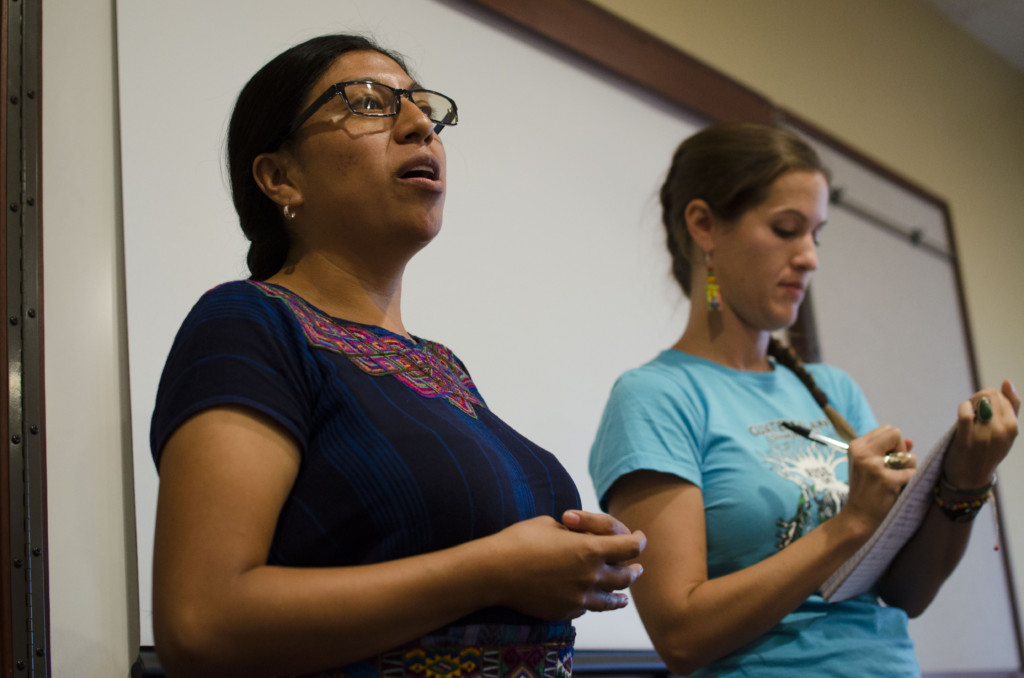 Maudi talks about the Sepur Zarco trial during a tour stop in Nogales, Arizona on the 2016 NISGUA tour. Credit: Graham Hunt

Maudi toured the U.S. representing the Alliance to Break the Silence and End Impunity, the interdisciplinary feminist coalition behind the strategic litigation that made this an emblematic case in struggles for justice across the Americas. Speaking to the local and international importance of the case, Maudi identified the verdict as a victory for all indigenous women in Guatemala, who face enormous racism and gender and class barriers within the national legal system. The women testified through interpreters and listened to trial proceedings through headsets, organized by accompanying organizations. Despite the language barrier and other legal hurdles, they worked together with other advocacy, mental health, and feminist legal organizations to achieve a successful verdict, which Maudi focused on during many of her presentations.

“At the beginning of the verdict, the judges said that they believed the women, that the most valued piece of evidence that led to the conviction was the women’s own testimonies. That kind of legal victory can become part of a healing process.” — Maudi Tzay

The former military officials prosecuted during the trial were sentenced to crimes against humanity, in addition to other charges. While “crimes against humanity” is a blanket charge, the judges chose to individualize sexual violence in their verdict as a way of strengthening the legal precedent and giving power to the testimony of the women survivors. The plaintiff organizations identified this naming of the crime as an important victory in the struggle to combat painful stigmas against sexual violence and to open the door for other cases of gender-based crimes.

Throughout the process, the women survivors were clear that a central goal of litigation was to help to build a legal framework to ensure that this kind of extreme violence against women would not be permitted to occur ever again, anywhere in the world.

“To be able to demand justice, first knowing what justice means for the victims is necessary. It isn’t only about attending to the victim, but also about preventing sexual violence so that it never happens again in any country. That’s what the women are asking for – that in no other place in the world will women suffer what they have suffered. For this to happen, [the experiences gained in the Sepur Zarco case] need to cross borders.” – Maudi Tzay. To read an extended interview with Maudi, click here.

From October 8-10, we joined over 300 social justice organizations from across the Americas for a weekend of community, education, and action against U.S. militarism at the Convergence on the U.S./Mexico Border in Nogales, Arizona/Sonora. The Convergence was organized by the School of the Americas Watch and partner organizations, moving the annual protest for the first time away from the gates of the Western Hemisphere School for Security Cooperation (formerly the School of the Americas) to the border in recognition of ongoing U.S. militarization.

At the border, Maudi joined dozens of other speakers in drawing connections between the legacy of the School of the Americas and the training of national and international military officials in counter-insurgency and scorched earth tactics including torture, massacres, sexual violence, forced disappearance, and forced displacement. Guatemalan dictator Efraín Ríos Montt was trained at the School of the Americas, and it was under his de facto 1982-1983 presidency that many of these types of human rights violations became systematized. Women were particularly targeted for being life givers and sexual violence was used in widespread ways to attack entire communities.

Maudi joined speakers from the across the Americas in a rally that took place on both sides of the border wall to call for an end to militarization throughout the region. Many speakers shared personal stories about experiences with ICE (Immigration and Customs Enforcement) and militarized violence on the border, while other shared song and messages of solidarity. Speaking from the Mexican side, Maudi highlighted sexual violence as a crime that is systematized across militarized contexts, referencing the high number of women who are raped along the migratory route. Hundreds of people gathered for her speech in a rare moment of solidarity in spite of the border that divided two crowds, as Maudi declared “Guatemala, presente!” For a longer report-back, click here.

Tour stop in Oakland: “Healing and Memory in Movements for Gender Justice”

Moderated by a member of GABRIELA San Francisco, the panel held a space for conversation between the two women about the roles that healing practices have played in movements for justice and historical memory. Maudi spoke about her work with the survivors of Sepur Zarco, while Dr. Nakamura spoke about her work organizing healing pilgrimages for survivors of Japanese-American internment camps and advocating within the Japanese-American community for solidarity with survivors of sexual slavery under Japanese military rule. Their respective experiences generated rich conversation with the moderator and the audience on the importance of honoring individual meanings of justice while centering healing, resilience, and solidarity between women. Read an extended report-back here.

Tour stop in Seattle: What is Justice? Panel discussion with Maru Mora

While the women of Sepur Zarco chose to take legal action as part of a larger strategy to prevent these types of crimes from happening again, Maudi emphasized that this was only one pillar in their larger search for justice. The judicial system is often ill-equipped to deal with the intricacies of justice and healing; Maudi illustrated this by comparing the Sepur Zarco trial to other cases of sexual violence, in which survivors have opted to not pursue legal action but instead focus solely on community organizing, work in historic memory, and the creation of mutual support groups.

Maru Mora complemented this perspective, speaking of justice through a prison abolitionist lens, and focused on the need to recognize and address the systemic causes of violence. She drew on her work as part of the Northwestern Detention Center Resistance and the racial and reproductive justice work she has engaged in at SURGE, recognizing the institutional racism in the criminal justice system that disproportionately and systematically criminalizes immigrants and people of color.

Grounding in a call to action

On tour, Maudi reminded us that true solidarity isn’t only about learning. It’s about taking concrete, political actions that support survivors and build stronger movements to change the systems that promote gender-based violence. Each one of us must be actively engaged in dismantling the systems of oppression that allow for and encourage sexual violence. The women survivors of Sepur Zarco took major steps to confront the violence of the past in coming forward and testifying as one part in a larger strategy of empowerment and healing. Many other survivors in Guatemala and around the world opt for other strategies. Like Maudi, we stand with women everywhere employing a wide variety of strategies to seek accountability for gender-based crimes and to build a world free from sexual violence.

As part of the follow-up to the tour, we are organizing a delegation to Guatemala in April 2017: “Women and the Work of Liberation in Guatemala.” We invite you to learn more about the groundbreaking work of Guatemalan women leading struggles for social and environmental justice, draw connections to your own movements for gender liberation, and expand your capacities for organizing in the U.S. Visit our website for more information about the delegation and ways to apply.

We extend our sincere gratitude to all of the people who participated on our tour, with particular appreciation for our tour hosts and organizing committees. Thank you to all of you who expressed solidarity with the women survivors of Sepur Zarco and took inspiration from their stories into your local work for social justice. We invite you to visit our Facebook album to see solidarity photos and other photos from the tour.