The following is a narrative account by a current NISGUA accompanier who was present at the burial of the remains of eight people from Alta Verapaz, disappeared by the Guatemalan military in 1982. These eight individuals are among the 565 that have been uncovered by the Guatemalan Forensic Anthropology Foundation (FAFG) during exhumations in the former Military Zone 21, now known as the Regional Command Center for Peacekeeping Training – CREOMPAZ.

A physical international presence is used as one strategy to dissuade threats against organizations and individuals that work against impunity and seek justice for state violence. NISGUA, in collaboration with ACOGUATE, continues to provide international accompaniment to the Association of Families of the Detained-Disappeared Guatemala (FAMDEGUA) as they join the Public Prosecutor’s office and other human rights organizations as co-plaintiffs in trying former military for crimes against humanity.

For more background on the CREOMPAZ case, read NISGUA’s in-depth report. Regularly check our blog and follow us on Twitter @NISGUA_Guate for updates on the case.

On August 30, the International Day Against Forced Disappearance, I attended a burial ceremony where the remains of eight people discovered in nearby mass graves were reunited with family members for a dignified burial. They are among the 45,000 people disappeared by the Guatemalan military during the internal armed conflict and among the hundreds of skeletons that have been exhumed from clandestine graves located within the confines of CREOMPAZ.

Since excavations began in 2012, members of the Guatemalan Forensic Anthropology Foundation (FAFG) have unearthed four mass graves within the base, filled with skeletons bound by blindfolds and ropes. Many of the remains show signs of death due to blunt force, torture, and execution-style shootings. Through DNA testing, FAFG has been able to identity more than 120 people, with ongoing analysis for the rest. These exhumations, together with further investigations by the Public Prosecutor’s office, FAMDEGUA, and the Mutual Support Group (GAM) led to the arrest of several high-profile former military officials this past January on charges of crimes against humanity and forced disappearances committed between 1981 – 1988. The CREOMPAZ case marks the largest case of forced disappearance in the history of Latin America.

The burial took place in a small cathedral in Cobán, Alta Verapaz. Walking in, I found myself alone in the pastoral social, a small room in the parish with eight wooden caskets. One of the caskets was smaller than the rest and draped in white cloth. At the base of each, surrounded by pine needles, rested plaques with the name of each person who was disappeared. At first, the caskets were empty, but soon held the remains of Guatemalans whom the army disappeared over thirty years ago. 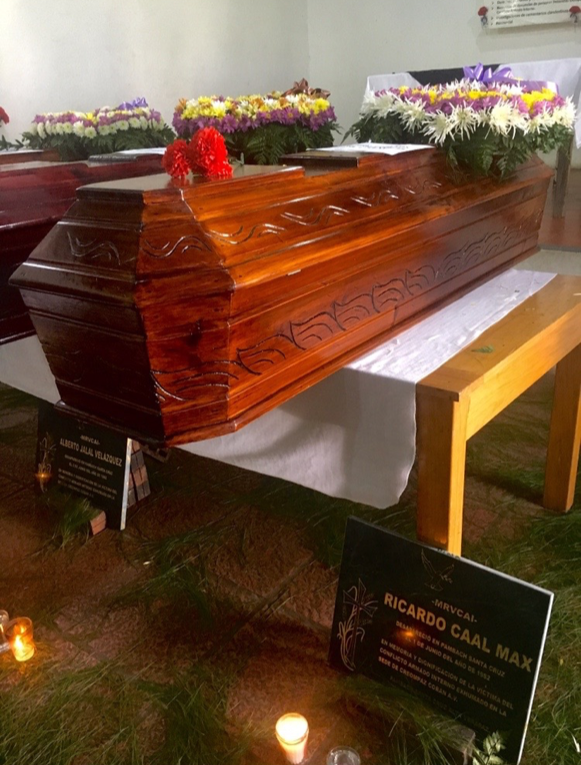 Candles were lit beside each name. Some 80 attendees entered the room and sat opposite from the caskets as members of FAFG placed plastic bags of bones into their corresponding caskets. Incense filled the room—a Catholic ceremony was followed by speeches from survivors and other human rights organizations. A member of FAFG’s team spoke, referencing the importance of exhumations as a way to prevent such atrocities from happening again. Next, a member of FAMDEGUA addressed the survivors, explaining, “[The plaintiffs] need your help and support because a trial has begun. This will be long.” The ceremony ended and a member of FAFG presented the family members with death certificates and other documents.

Two men carried out the first casket, the small one in white cloth. In it, housed the bones of Marta Elena Chen Ivoy, last seen by her family when the Guatemalan army kidnapped her in 1982 at the age of four. The Chen Ivoy family saw the disappearances or murders of both parents and all five of their siblings that year; two brothers are the only surviving family members. With the return of some of the disappeared, the whereabouts of eight family members are still unknown. The DNA match for Marta Elena gives them hope that more family members will be identified and returned home.

The casket was carried to a van traveling to the home of her family outside of Rabinal, Baja Verapaz. Two hours later, we arrived at her home; her casket was carried inside where family members surrounded her with flowers and candles. I huddled among a dozen others in the small wooden house and was offered bread and thick, piping hot atol. A member of FAFG opened the casket and deftly reconstructed parts of Marta Elena’s body from the bag of bones, placing the bones on top of the blouse she wore on the day she was disappeared. Sixty-two of the bodies found in the same mass grave as Marta Elena have already been identified – 37 belonging to children. The mother-in-law of one of Marta Elena’s brothers approached the casket first and was soon followed by a crowd of children who looked on as the member of FAFG assembled the bones. She explained to the children – many on their tip-toes to see into the casket – how Marta Elena was younger than the children the last time she was seen.

The power of this scene and its implications for the recuperation of historical memory was the most poignant moment of the day for me. Despite the extreme deterioration of her skeleton, FAFG successfully identified Marta Elena after matching her DNA to the samples offered by her two brothers. With so few of Marta Elena’s bones remaining and other skeletons from the grave showing signs of torture, the family can only imagine what Marta Elena experienced. Will these children’s education address the horrors of the armed conflict? Will they learn about the other 45,000 Guatemalans who were also disappeared? From such a young age they will take this experience with them forever. Marta Elena, through her formal burial, has gifted another generation a glance into the country’s genocidal past and ensured that story of the Chen Ivoy family will live on.