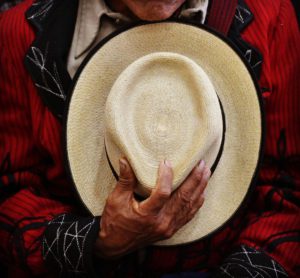 After a holiday recess, the Ixil genocide case retrial will be heard again today. As Ixil witnesses come forward to once more share their experience of genocide publicly, they are surrounded by the supportive presence of members of the AJR. However, the AJR members have faced institutional discrimination and racism by the police, who sought to deny them entry to the courtroom.

Last week, when groups of AJR members sought to enter the court, they faced harassment by the police, who questioned their right to be present. The police demanded to know why they were there and who was their leader. Others who came to the trial did not face similar interrogation. In some cases, the police were so insistent in denying them the right to enter that lawyers had to come intercede. State harassment and intimidation continue to focus on those who survived state repression and who stand firm in their call for justice.

Weekly, the AJR has organized to bring its members from around the country to stand in solidarity with Ixil witnesses. They call for justice not only for the Ixil people, but also for the many other victims of genocides and crimes against humanity committed throughout the country during Romeo Lucas García and Efraín Ríos Montt’s dictatorships.

NISGUA stands in solidarity with the Ixil genocide witnesses and the AJR members as they affirm once more that YES! There was genocide. NISGUA has accompanied the AJR since its inception 17 years ago. If you too would like to stand in solidarity with the AJR, please follow our coverage on Facebook and Twitter and consider supporting our solidarity work.
nisgua_admin2019-12-27T17:53:53+00:00January 3rd, 2018|Genocide Trial, Justice and accountability|