STATEMENT: We support the independent work of the honorable Judge Miguel Ángel Gálvez

On May 6, Judge Miguel Angel Galvez ordered the opening of the trial for the first nine military and retired policemen accused in the “Military Diary” case. Subsequently, after the capture and first hearing of Toribio Acevedo Ramirez, who was a fugitive and wanted for the same case, Judge Galvez was denounced by an extreme right-wing group using the same strategy that has led other justice operators into exile.  The Supreme Court of Justice, co-opted by the interests of the groups in power, announced that it accepted a petition to revoke Gálvez’s judicial immunity.

The persecution against Judge Gálvez has been condemned by survivors, relatives of victims, as well as national and international human rights organizations.

THE ASSOCIATION FOR JUSTICE AND RECONCILIATION COMMUNICATES TO THE PUBLIC OPINION

The Association for Justice and Reconciliation -AJR- strongly rejects the criminalization, harassment, and acts that threaten the integrity of High Risk Judge Miguel Ángel Gálvez, who has carried out independent and committed work in important cases in the fight against impunity and against those responsible for the serious human rights violations during the Internal Armed Conflict.

We condemn the planned persecution against justice operators implemented by shock groups that have taken it upon themselves to discredit, persecute, harass and threaten independent judges not aligned with the – Corrupt Pact –. The resolution issued by Judge Gálvez in the  – Military Diary – case has triggered an increase in persecution against him.

As an association of relatives and survivors of the violence of the Internal Armed Conflict and plaintiffs in other judicial processes of transitional justice, we express our absolute support for the work of Judge Miguel Ángel Gálvez and we recognize the importance that personal security and integrity have for the independence of the judges, especially within a generalized climate of violence and persecution against justice operators as occurs in Guatemala.

We demand that the State, particularly the Judicial body, protect Judge Gálvez from harassment and threats that are intended to hinder judicial proceedings, prevent the clarification of acts during the Internal Armed Conflict, and cover up those responsible for said acts, a situation that violates the right of victims and survivors to access prompt and impartial justice. 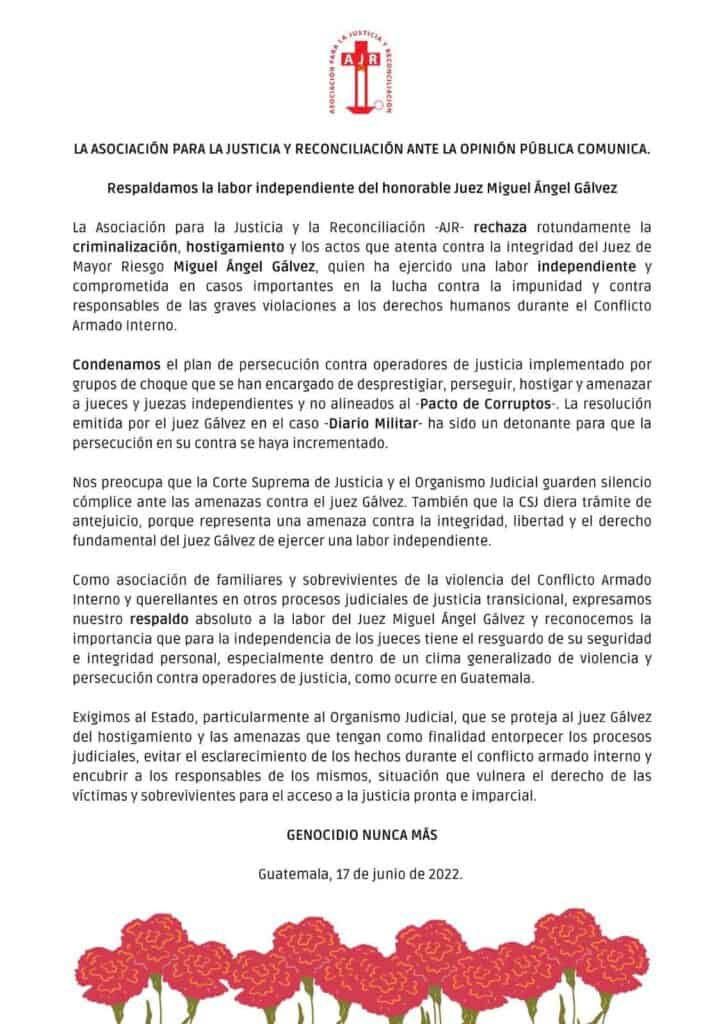