In July 2021, we delivered our petition in solidarity with Indigenous migrants with more than 1300 signatures! The fight against Title 42 continues; we encourage you to take action with the Welcome with Dignity campaign.

Migrants, especially Black and Indigenous peoples, have long been oppressed by an immigration system made to serve white supremacy and capitalism. After four years under an explicitly white nationalist administration, the U.S.’s immigration bureaucracy is either actively violating human rights or simply not functioning – an act of violence in itself. While the Biden administration does not have the progressive vision we need, it opens space for tangible change in the lives of millions of people. After a year of coordinating with over 40 Central and North American organizations in a campaign against the Asylum Cooperative Agreements (ACAs), deportations during the pandemic, and Title 42 expulsions of asylum seekers, we are well poised for concrete wins in 2021.

“Only together, with the memory of the struggle and resistance of our people, can we stop imperialism.”

What are pandemic deportations?

Deportations always violate human rights, and the long-term goal for social movements should be to stop them altogether. However, there is an even more urgent need to stop deportations during the pandemic. Experts estimate that from March 2020-February 2021, over 80,000 people have been deported to Latin America and the Caribbean.

Our Indigenous and Campesino partners are concerned that deported people are forced to return home to largely poor and rural communities. Lack of public health support from the U.S. and Guatemalan governments (including racism and classism in vaccine distribution) means that these deportees may bring COVID to communities that would otherwise be relatively safe due to their isolation. President Biden declared a partial 100-day moratorium on deportations on his first day in office, which a court later halted. Deportations continue and must be stopped.

What are Title 42 expulsions of asylum seekers?

In March 2020, the Trump administration weaponized a Center for Disease Control and Prevention (CDC) order that shut the door to asylum seekers arriving at the U.S. southern border. There are currently almost no legal pathways for refugees to apply for asylum at the border. Instead, the U.S. has been transferring asylum seekers to Mexico or their countries of origin without a chance to seek protection. This violates laws protecting due process and non-refoulement (not forcibly returning people to countries where they may face persecution).

Through an executive order on February 2, President Biden ordered a “prompt review” of the CDC order and Title 42 rule. However, the administration and the Congress have not shown the political will to actually stop expelling asylum seekers. Pressuring them is vital to stop these inhumane and illegal expulsions.

Today, a broad coalition of Central and North American organizations delivered a petition with more than 1300 signatures to the State Department, the Department of Homeland Security, and the U.S. Congress. The petition calls for an end to expulsions of asylum seekers under Title 42 and deportations during the pandemic, policies that disproportionately impact Indigenous and Black migrants. Additionally, it demands protections for Indigenous migrants, including:

Title 42 is part of a public health law that the Trump administration weaponized to block access to asylum along the U.S. southern border. Since March of 2020, it has been used to expel most arriving asylum seekers back to their countries of origin or to Mexico, without being afforded an opportunity to seek protection. Six months in, the Biden administration has continued implementing this policy that directly endangers those who we are meant to protect, in violation of U.S. laws and treaties.

“There are various root causes of migration including historical territorial dispossession and land displacement, structural and state-sponsored violence, and corruption and impunity, all which contribute to poverty, hunger and climate change,” says Dr. Giovanni Batz (Maya K’iche’). “Indigenous peoples often confront discrimination and racism on their route to the U.S. through Mexico, especially if they speak an Indigenous language as there remains scarce resources for interpretation and translation, thus hindering their ability to adequately access their rights and legal protections such as seeking asylum. Indigenous leaders and communities have proposed solutions to deter migration and need to be consulted. The militarization of borders, criminalization of migrants, and massive deportations and expulsions through Title 42 have only exacerbated an already dire situation and must end.”

We are excited to share the recording of “On our own terms: Indigenous perspectives on forced displacement & immigration systems”! We thank our amazing panelists Dr. Floridalma Boj Lopez (Maya K’iche’), Gerónimo Ramírez (Maya Ixil), Natali Segovia (Quechua/Peruvian) for their moving speeches. Thank you also to all the sponsoring organizations (logos attached), especially American Friends Service Committee (AFSC) for their financial support. Finally, thank you to our interpreters and closed captioners for making the webinar as accessible as possible. 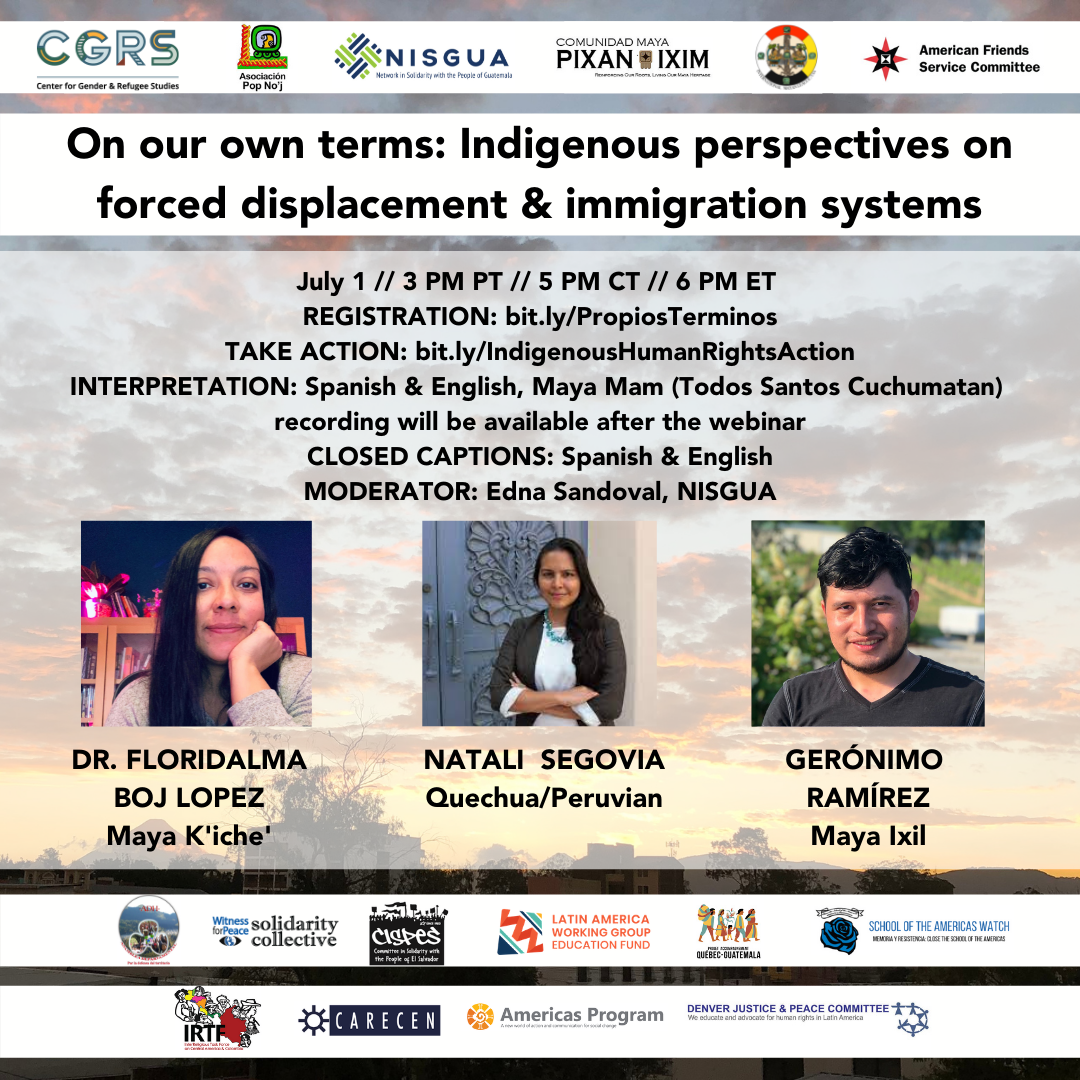 Thank you for watching for our webinar “Indigenous Peoples’ Human Rights in Migration”! We thank our amazing panelists Juanita Cabrera Lopez (Maya Mam), Luis Marcos (Q’anjob’al Maya), Giovanni Batz (K’iche’ Maya) for their moving speeches. Thank you also to all the sponsoring organizations (logos attached), especially American Friends Service Committee (AFSC) for their financial support. Finally, thank you to our interpreters, closed captioners, and graphic notetaker for making the webinar as accessible as possible. 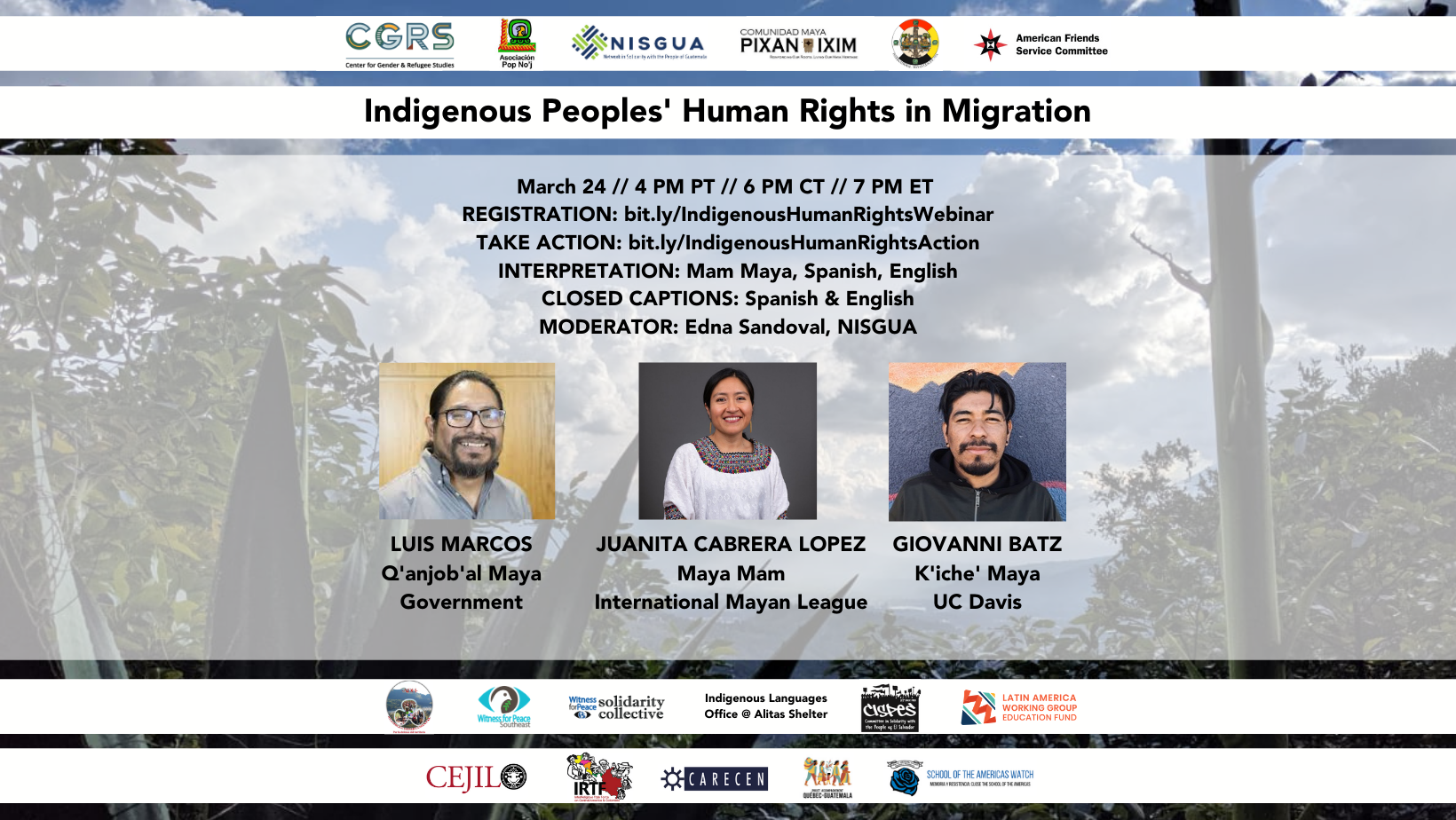