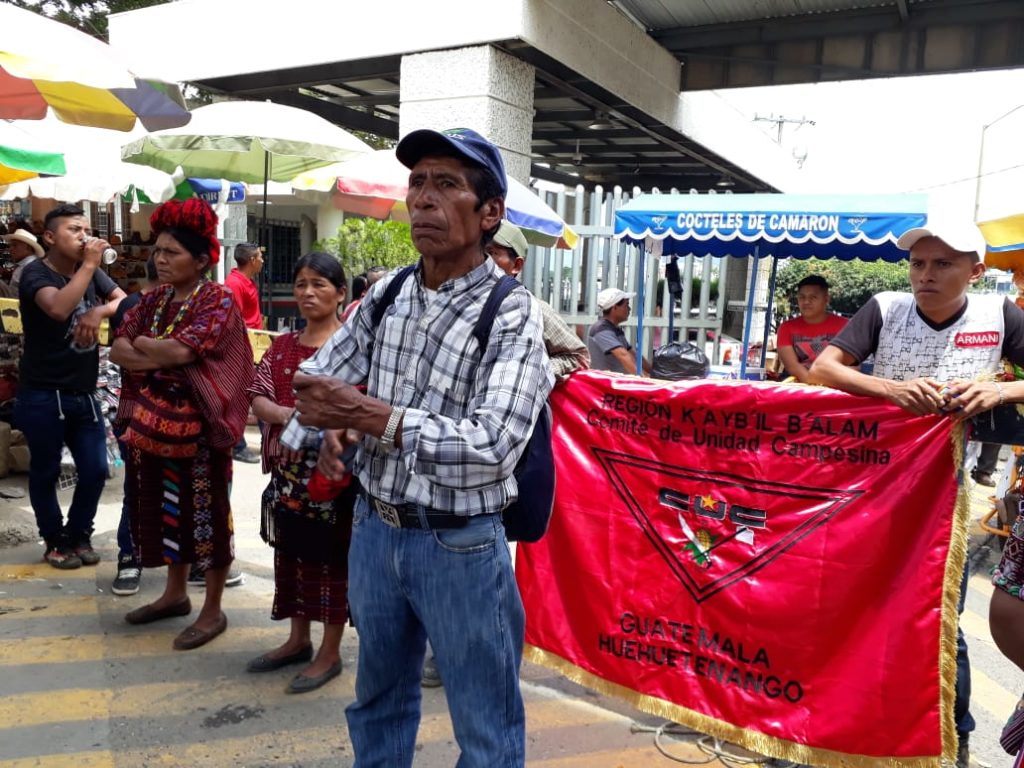 Three hundred community members organized by the ADH took over the Mesiilla check point on the Guatemala-Mexico border on August 9, protesting the “safe third country” agreement, systemic impunity & the invasion of their territorries by extractive industry. Photo credit: Departamental Assembly of Peoples of Huehuetenango (ADH)

Due to the pandemic, on March 17th the Guatemalan government announced a temporary suspension of flights carrying migrants being deported from the U.S. to Guatemala under the safe third country agreements. This suspension has not terminated the agreements with Guatemala, El Salvador, and Honduras, and deportations are scheduled to resume as soon as “sanitary protocols are established.” With our partner organizations we will continue to demand “No safe third country agreements with Central America!” and to stand in solidarity with migrants who are disproportionately affected by this pandemic. Horrifically, “normal” deportations still continue to Guatemala. Click here to take action against this and other pandemic-related forms of violence.

To stop these inhumane and illegal agreements, we need major people power. Join us!

Despite state efforts to obscure information about the agreements, resources exist. We recommend:

In light of the COVID-19 outbreak, we decided to cancel all in-person tour stops for our spring 2020 tour. We are incredibly grateful for all those in New Mexico, Arizona, and Los Angeles who have been organizing and planning events for the past several months.

As internationalists seeking to build solidarity across state-imposed borders, we are resourced for moments such as this, so that our learning, organizing, and action can continue. We were thrilled to hold a webinar with Silvia Raquec of Association Pop No’j on April 16. 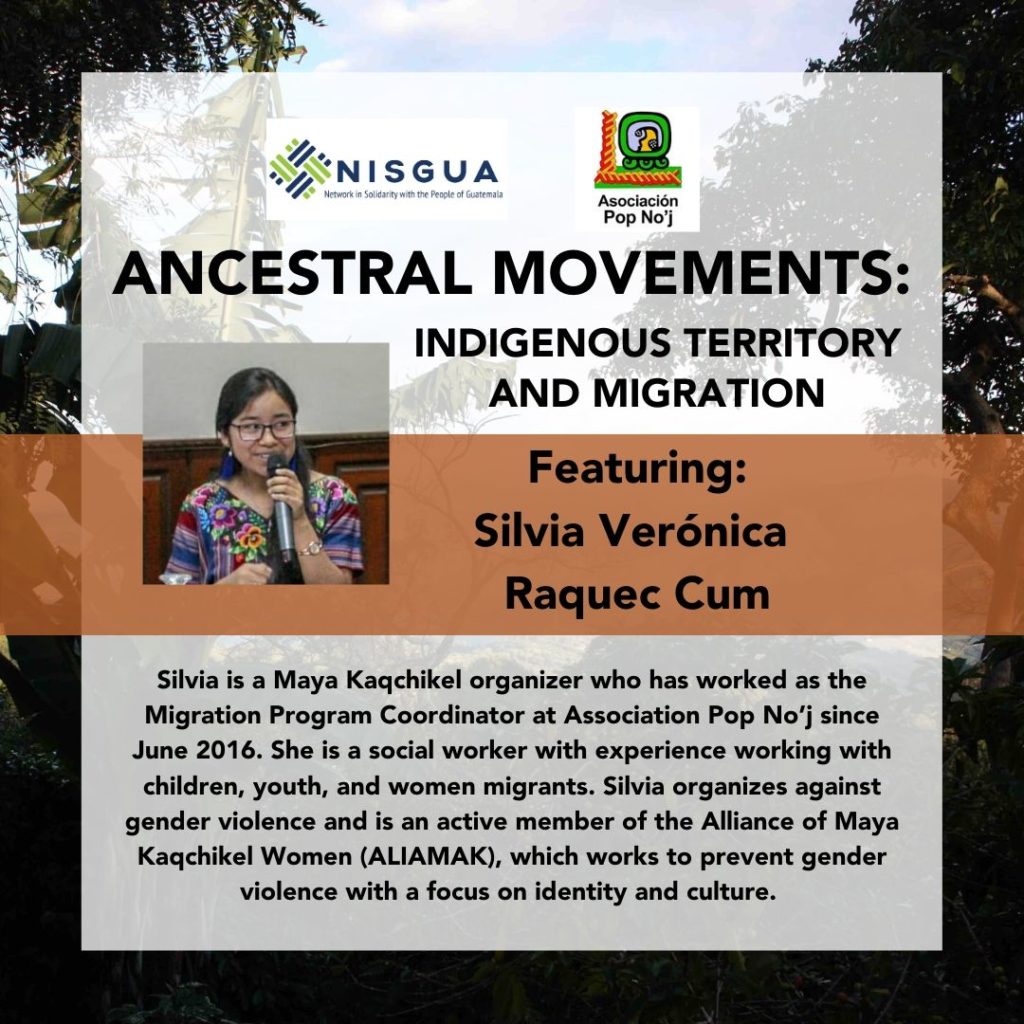 “The Asylum Cooperation Agreements, also known as “third safe country agreements” that were signed between the U.S. and the northern countries of Central America (Guatemala, El Salvador, and Honduras) in 2019 threaten the security and dignity of migrants, and are a violation of the sovereignty of these countries. The U.S. Congress should do everything within its power to stop the implementation of these Asylum Cooperation Agreements.”

This petition is open! The final petition with signatures will be delivered to strategic U.S. Congressional representatives. Please share widely! 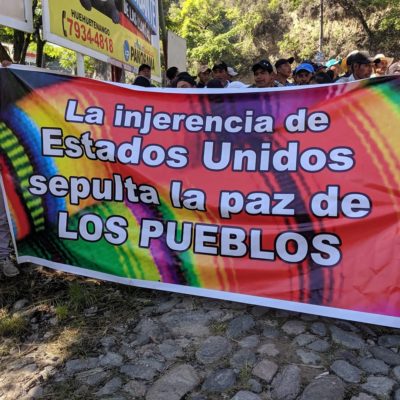 A sign by the Departmental Assembly of Peoples of Huehuetenango (ADH) reads, “The interference by the United States buries the people’s peace.”

This is the most important part! We need to show congress that we will not allow them to be complicit in this violence by the Trump administration. Call and email your congresspeople to pressure them to:

This link will take you to CISPES’ platform from which you can contact all your representatives and senators with the click of a button. We prepped the email for you too! Thank you for taking action against these illegal and inhumane agreements.

Even though it shouldn’t be, reaching out to congress can be intimidating. We are here to support. This button will lead you to email info[at]nisgua.org.

Who are specific targets for these demands?

Reach out to us for support and to let us know where you’ve submitted!

To strategize where to publish more letters to the editor or op-eds, we need to hear from you! Please let us know where you submitted and if you were published. This button will take you to email claire[at]nisgua.org.

Here is a sample letter to the editor or op-ed that you can use as a template. Please feel free to use any part of this letter that serves you. We recommend that you use this draft as a scaffolding of the facts, and that you heavily adapt it to be more attention-grabbing and relevant for your local audience. You can find out about how to submit op-eds from your local newspapers or magazines. Thank you so much for engaging with this material and for supporting our campaign in this way! With our organized voices and actions we can inspire collective change.

In July of 2019, the Guatemalan Interior Minister, Enrique Degenhart, and the acting Secretary of the Department of Homeland Security, Kevin McAleenan, signed an Asylum Cooperative Agreement (ACA), also known as a “safe third country agreement.” This came about after political pressure and threats of economic sanctions from the Trump administration. The agreement allows for the U.S. to deport asylum-seekers to Guatemala, even if they are not from there. A few weeks later, the U.S. signed similar agreements with Honduras and El Salvador. These covert agreements are part of a larger strategy that the Trump administration uses to deny people the right to migrate and apply for asylum. By deporting asylum-seekers to countries they are not from and to places where they may face danger, the U.S. denies them protection and violates international refugee law, including Articles 13, 14, and 15 of the Universal Declaration of Human Rights.

The U.S. signed the ACAs despite the fact that Guatemala, El Salvador, and Honduras are unable to respond to the needs of their own citizens, let alone those of the thousands of asylum-seekers for whom the U.S. is legally responsible. In 2018, 62,000 Salvadorans and Hondurans sought U.S. asylum, and in 2019, the majority of migrants detained at the U.S. southern border were Guatemalan, many of whom are Indigenous. Moreover, this instability is due in large part to the destabilizing nature of U.S. foreign policy in northern Central America, which has promoted violent resource extraction, enabled mass corruption, and further militarized the region.

Additionally, the ACAs either ignore or do very little to address the fact that none of these countries have asylum systems built to address an imposed influx of asylum-seekers. More than 900 migrants from Honduras and El Salvador have been deported to Guatemala under the agreement. Of these, less than 20 people have sought asylum there. Due to the COVID-19 pandemic, the ACAs have been suspended, but they could be reinstated at any time. Despite going against its own public health recommendations, the U.S. continues standard deportations, putting deportees and their countries gravely at risk. [Standard deportations are a rapidly evolving situation. Please email claire[at]nisgua.org for the most updated information to include in your letter]

We must demand that Congress defund the agreements, demand more information about the signing and implementation of them, and take a stand against the agreements as a threat to safety, human dignity, and Central American sovereignty. Concerned people can get involved by 1) educating themselves and others, 2) signing a petition against the agreements, and 3) contacting their congresspeople. To learn more about this campaign, please visit www.nisgua.org/take-action.