‘On the Road for Justice’ Speaking Tour to Bring Attention to Guatemala Mining Conflict, Need for Remedy in Canada

(Ottawa) How is it that when community leaders wrongfully targeted in the wake of violence connected with Tahoe Resources’ Escobal silver mine in Guatemala they spend months in jail, while the company’s former head of security, accused of ordering guards to open fire on protesters last April, is first given house arrest and then allowed to avoid prison by arguing that he is sick?
This is just one of the stark asymmetries in the current conflict between the Toronto-listed mining firm and communities in southeastern Guatemala, where repression and violence have been the outcome of efforts to install the project without social support.
More than half of the communities in the municipality of San Rafael las Flores, where the Escobal project is located, have declared opposition to the mine. In neighbouring municipalities, in the departments of Santa Rosa and Jalapa, the majority of the population has voted against the mine in municipal referenda.
 
Nonetheless, Tahoe Resources reported in January that the Escobal mine is operational, claiming that “unanticipated social issues have been addressed.” According to local reports, the only thing that Tahoe Resources seems to have resolved is how to mine despite ongoing conflict in Guatemala, where the company and its principal investor, Goldcorp, wield considerable political and economic influence.
This conflict brings to the forefront the need for the Canadian government to facilitate access to justice for abuses committed abroad. The tour of a group of Guatemalans to include stops in Ontario, Quebec, and British Columbia will link to the Canadian Network for Corporate Accountability’s Open for Justice campaign. The CNCA campaign calls for laws to allow access to Canadian courts for people who have been harmed by the international operations of Canadian companies. It also calls for the creation of an extractive-sector Ombuds office in Canada mandated to investigate accusations of abuses and make recommendations to the government and the companies involved.
To provide a first hand community account of the situation around the Escobal mine, lawyer Rafael Maldonado from the Guatemalan Centre for Environmental, Social, and Legal Action (CALAS) will visit Ottawa, Toronto and Montreal to talk about the current state of Canadian mining conflicts in Guatemala.
Mr. Maldonado has defended numerous community members who have been criminalized for their opposition to the Tahoe project and represents plaintiffs in the case against Alberto Rotondo, who is facing charges for aggravated assault against six community members. Mr. Maldonado also represents communities in a case of industrial contamination against the mine.
Mr. Oscar Morales will join Mr. Maldonado in Toronto and then travel to Kingston, Peterborough and Vancouver. Mr. Morales is Coordinator of the Committee in Defense of Life and Peace in San Rafael Las Flores, as well as a community advocate and agronomist who is deeply concerned about the environmental and social impacts of Tahoe’s mine. He has worked to support the six men shot by mine security in April 2013 and has been an advocate for the community consultations that have taken place throughout Santa Rosa.
Ms. Celeste Gutierrez from the Diocesan Committee in Defense of Nature (CODIDENA) from Santa Rosa will also participate in the events in Toronto and then travel to the Maritimes. Ms. Gutierrez will speak on CODIDENA’s work to educate communities on the impacts of mining projects, her experiences organizing community consultations in Santa Rosa and the risks for human rights defenders in Guatemala.
For more information or to arrange interviews with the delegation:
This speaking tour would not be possible without the support and hard work of the Justice and Corporate Accountability Project (JCAP) at Osgoode Hall Law School, the Maritimes-Guatemala Breaking the Silence Network (BTS), and the Network in Solidarity with the People of Guatemala (NISGUA). 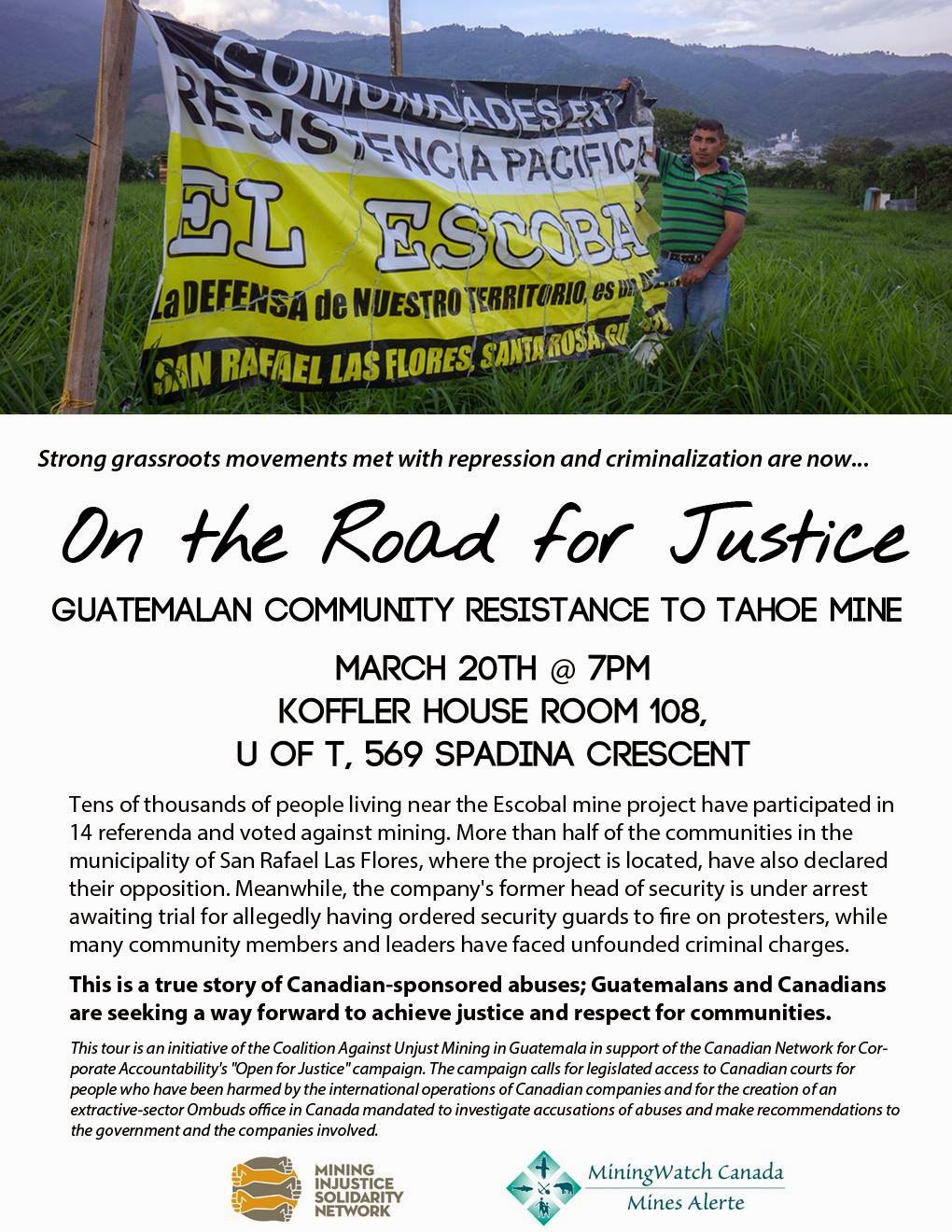