A Chronicle from February 25th

On February 25th, NISGUA was present at the march and commemoration held in Guatemala City for the National Day of Dignification for the Victims of the Internal Armed Conflict (IAC). This is an important day nationally for honoring the memory of those whose lives the Guatemalan state and military took during the 36-year-long IAC.

Commemorations are also a key tool our counterparts and others use in their struggle for the reclamation of historical memory, asserting time and time again that there was a genocide, that people were murdered and forcibly disappeared by the state, and that they won’t forget their legacy, won’t stop searching for the desaparecides until they are found. 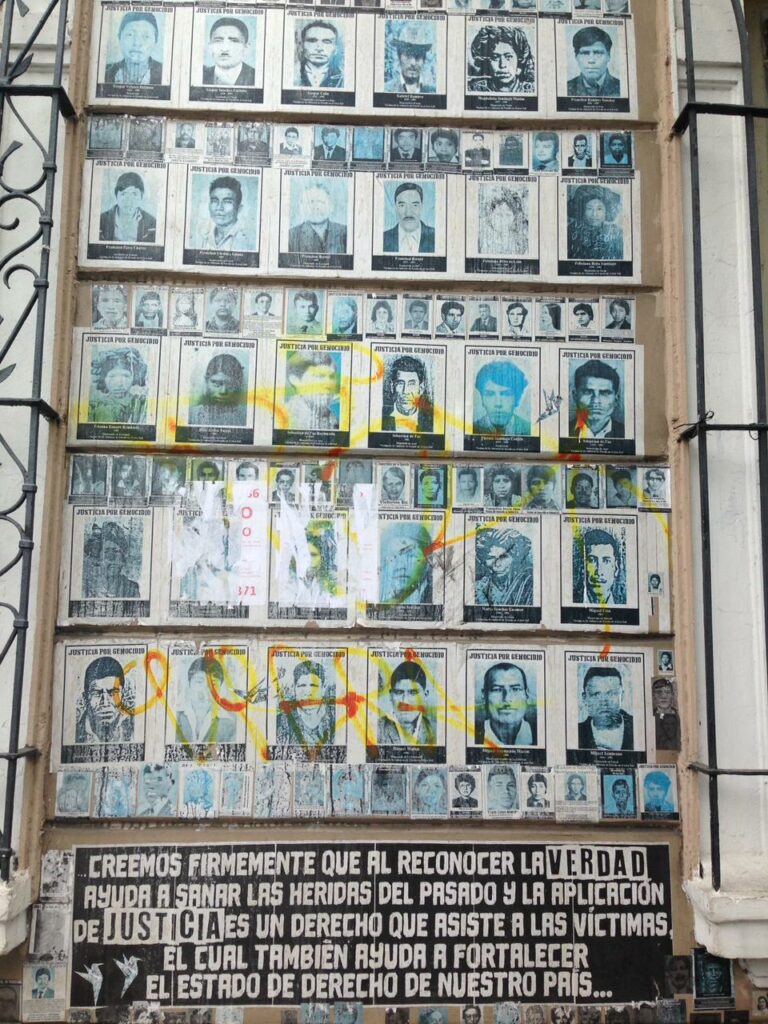 Image with several pictures of people who were forcibly disappeared with the words “We firmly believe that recognizing the truth helps heal the wounds of the past and that the application of justice is a right that serves the victims and also helps to strengthen the rule of law in our country…” at the bottom.

The activities started in the Human Rights Plaza with a gathering of many different civil society groups, such as the National Platform of the Victims of the Internal Armed Conflict (la Plataforma), Communities of People in Resistance from the Mountains (CPR-Sierra), and Nous Sommes Ici*(We Are Here/Estamos Aquí). La Plataforma opened the day with a traditional Maya ceremony to honor those who are no longer with us, those who were taken. 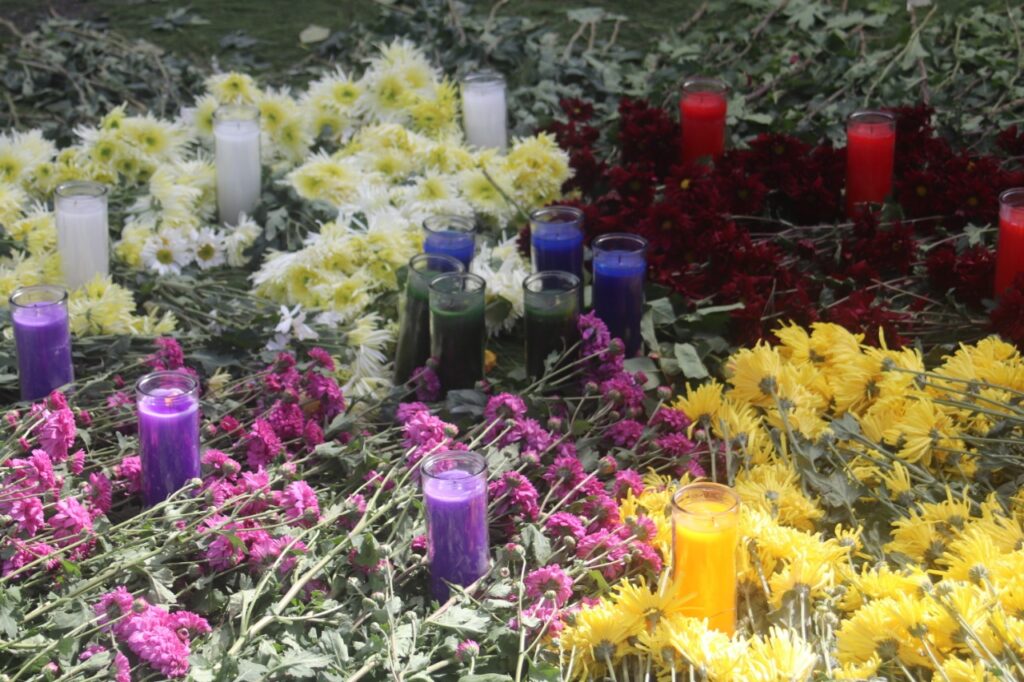 Picture from the ceremony at the Human Rights Plaza depicting candles and flowers divided by color: purple, yellow, red, and white.

The march began from the Human Rights Plaza and headed down the main avenue in Guatemala City’s historic center, the Sexta Avenida. The first stop we made was in front of the entrance to the courthouse, where among many demands was the clear ask for the election of an impartial and independent Attorney General, calling not to reelect Consuelo Porras. 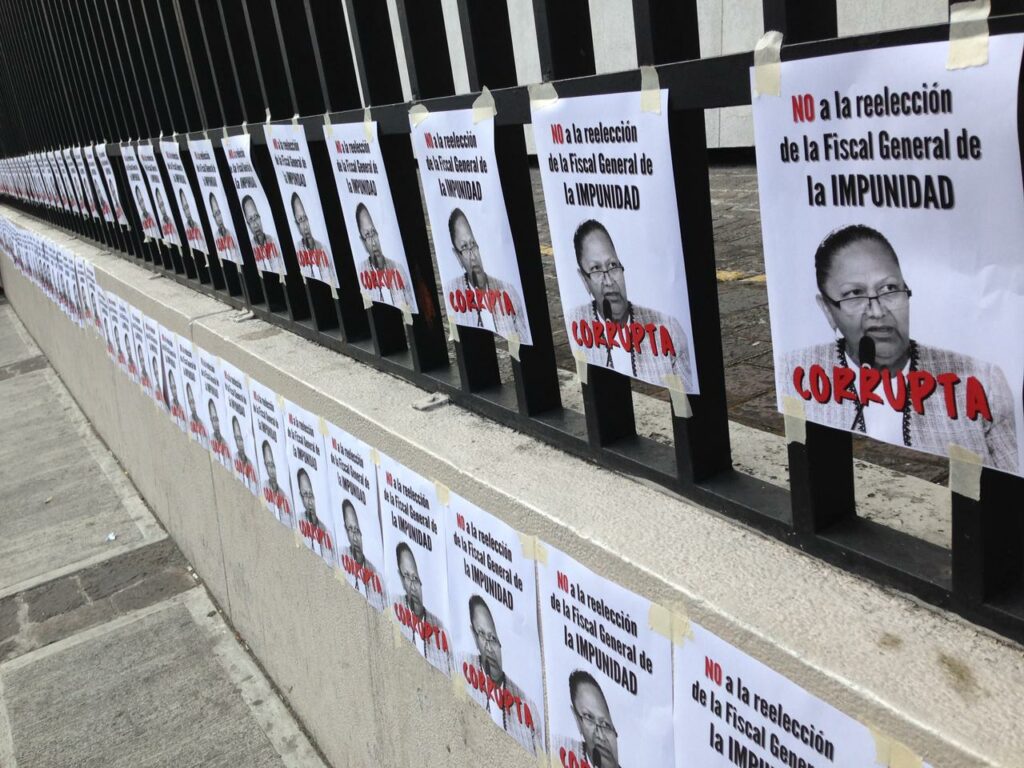 Image of dozens of the same flyer stuck to a fence with a picture of Consuelo Porras and the text “NO to the reelection of the Attorney General of IMPUNITY. She is CORRUPT.”

Another important stop during the march was at the Pasaje Rubio, an indoor shopping mall and the sight where police, during the Lucas García government, murdered student activist and president of the Association of University Students (AEU) Oliverio Castañeda de León.

Video depicts the march from February 25th, with many people walking in a line holding flowers and signs related to the Day of Dignification for the Victims of the Internal Armed Conflict.

The march ended in the Constitutional Plaza, with a final ceremony held at the altar that was created five years ago for the 41 girls that died and the 15 injured in the Hogar Seguro Virgen de la Asunción fire at the hands of the Guatemalan state.

Honoring their memory on the 25th draws links across time and space that the same acts and mechanisms of state-sanctioned racial, classist, heteropatriarchal violence continue, that we must not stop in our organizing and solidarity, that it is more important now than ever. Until all of the desaparecides are found, until the killing of women and girls ends, until the danger of repetition of these crimes ceases to exist, until we are all free. 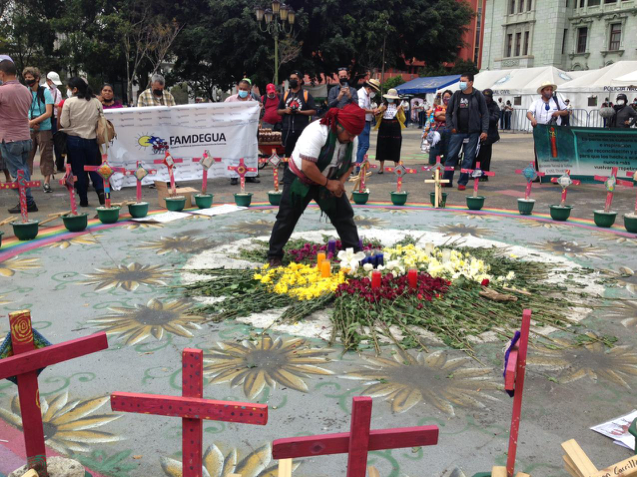 Image of the ceremony held inside of the altar created for the 56 girls. In the center is a circle of red, white, purple, and yellow flowers with a person standing over them lighting candles, followed by a ring of chalk-drawn flowers and a ring of red crosses on the outside.

*The collective Nous sommes Ici is formed by people who were adopted irregularly during the Internal Armed Conflict. Most of the members of the collective  were sent to Canada, and their goals include helping other adoptees to know their history and their roots and find their biological families in Guatemala.