ON TRIAL FOR GENOCIDE AND CRIMES AGAINST HUMANITY

ON TRIAL FOR GENOCIDE AND CRIMES AGAINST HUMANITY

After almost forty years of the perpetuation of crimes against humanity such as genocide, Chief of Operations General Luis Enrique Mendoza García was sent to trial for genocide and crimes against humanity committed against the Maya Ixil people due to sufficient evidence of his participation in these crimes, seeing as he was in charge of the implementation of military plans and operations in the Ixil region.

General Luis Enrique Mendoza García served as Director of the Operations Section (S3) of the General Staff of the Army between April 1982 and August 1983; this position included elaborating orders for the execution and assembly of all operations for carrying out the Plan Victoria 82 and having knowledge of each of the steps carried out by the troops in real time. The general was a member of the Defense General Staff of the de facto government of General Efraín Ríos Montt and actively participated in the intellectual planning in Plan Victoria 82. His functions were fundamental for the perpetration of crimes against humanity and genocide at that time.

General Mendoza García was captured in June 2019 after having been a fugitive from justice for more than seven years. When he was put on trial, he was granted a substitutive measure, despite the severity of the crimes committed, putting the safety of the witnesses at risk, as well as the accompanying danger of the obstruction of justice.

Justice has not been promptly served for the thousands of victims and survivors of the genocide who have had to wait decades to be heard and for the road to justice to begin.

During the intermediate phase hearing it was confirmed that both the AJR and CALDH will continue as associated plaintiffs in the process. Now the phase of the presentation of evidence is next, which will be held on March 14 and 15, 2022 as a prelude to the oral and public debate which will be held by the First Court of Criminal Sentencing Narco-activity and Crimes against the Environment in the department of Guatemala.

THE  GENOCIDE WAS PLANNED, COORDINATED, SUPERVISED AND ALLOWED

IN GUATEMALA, THERE WAS A GENOCIDE 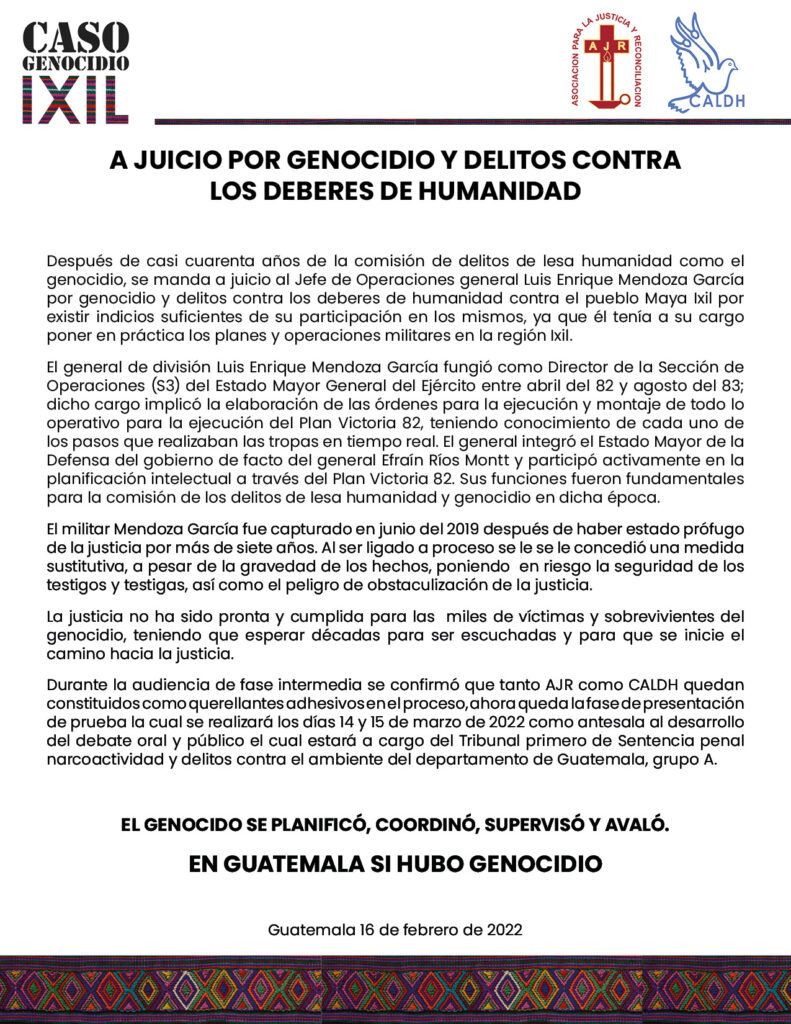