“We oppose the acceptance of the request made by the AJR and CALDH entities to be definitively constituted as associated plaintiffs in the present process and we also request, honorable judge, that the civil claim be expunged for not having exercised it in this hearing and that a dismissal be issued to my defendant”, thus began the statement of the defense attorney of the defendant Luis Enrique Mendoza García during the beginning of the fourth day of the hearing of the intermediate phase of the Ixil genocide case.

During their statement, the defense emphatically denied the existence of the Internal Armed Conflict in Guatemala and questioned the suitability of the expert opinions proposed by the Public Prosecutor’s Office. They also justified that their client did not work on nor know the contents of the Campaign Plan Victoria 82, he only legalized it. In reference to the Operations Plan Sofia, they said “This plan is the fruit of a poisoned tree” because the State of Guatemala has not recognized its validity.

They justified the army’s operations in the Ixil area by arguing that the only internal enemy in the territory was the EGP, “each of the members of the army went to fulfill a constitutional function that defeated the armed groups that attempted to take the political power of the nation by armed means in an illegal manner.”

Judge Silvia de León accelerated the hearing so that the Public Prosecutor’s Office and the plaintiffs could comment on the exemptions raised by the defense at the beginning of the hearing, to which the attorney for the Center for Human Rights Legal Action expressed the following: “It is essential to allude to what has been established both in international jurisprudence, Inter-American and even national jurisprudence in relation to the power and the right of access to justice of the victims of serious human rights violations, even more so in these cases where the assets that are being affected are of international importance, the ultimate purpose of judging the crimes of genocide and crimes against humanity is to protect the dignity of humanity so that these events do not happen again. ”

The hearing concluded with the plaintiffs’ asking that the  dismissal of the requests of the defendant’s technical defense and that both organizations be constituted as definitive plaintiffs in these proceedings.

The next hearing will be held on Tuesday, February 15 at 9:00 a.m. at the High Risk Court C under the charge of Judge Silvia de Leon, where she will announce her decision on whether the defendant will be sent to oral and public debate. 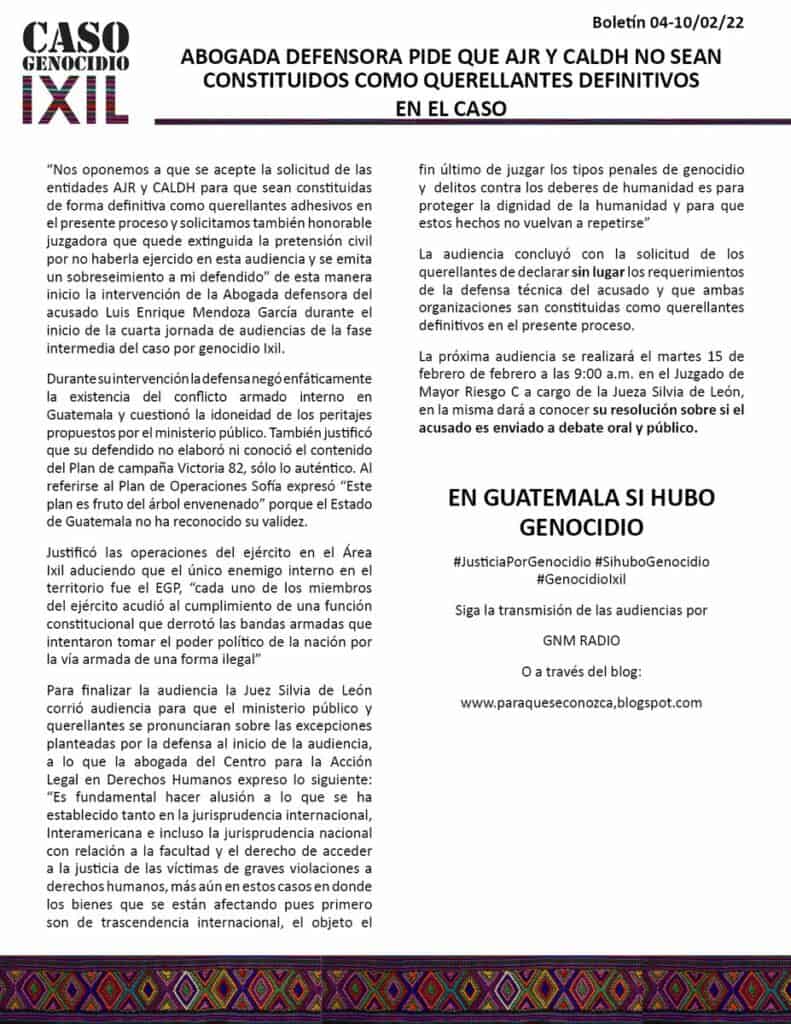