“I AUTHORIZED THE VICTORIA 82 PLAN”

On the third day of the genocide trial, Luis Enrique Mendoza Garcia, Chief of Operations of the General Staff of national defense during 1982 and 1983, admitted that he autorized the Victoria 82 Plan of Operations, “I did not create it nor did I participate in the creation of this plan, it was made by a Special General Staff that worked with great caution, because it was a military plan in the face of the aggression that the country and society were experiencing, it was given to the military units that were directly in the area of operations, I only autorized it.”

“Military plans respond to a superior planning order and guidance from the high command and each section chief only authorizes them to recognize that it is an official document.”

“The Victoria 82 plan originated because the Head of State was aware of the prevailing situation in the country and knew that there was a subversive presence in almost 80% of the national territory and that it was necessary to put a stop to it, because that is his mission.”

“The enactment of a plan is the sole and exclusive decision of the commander, he is the only boss and if he makes a mistake, he has to face his superiors and the judgment of his subordinates. Therefore, a plan is created, the basis for which is the assessment of the situation, but it was necessary to create the course of action which had already been given by the president, where all the state institutions are involved in the recovery of the economic, social and political factors of the country, the Victoria 82 plan, being a military plan, had a mission and to achieve that mission had three or four different possible courses of action to give alternatives to a commander to do the right thing and to do what is best for the mission.”

He also recalled the different promotions and experience in other military zones during the Internal Armed Conflict: “I was sent to Huehuetenango as an S3 as a replacement command, people arrived there to become citizen soldiers, these people barely spoke Castilian or Spanish, you had to know how to communicate with them, they were taught to put on their boots, to brush their teeth, to sit on the toilet, to eat, to give them laws and military regulations.”

Regarding the Sofia Operations Plan, he denied having any knowledge because he had sent  everything to be “filed” in a box. 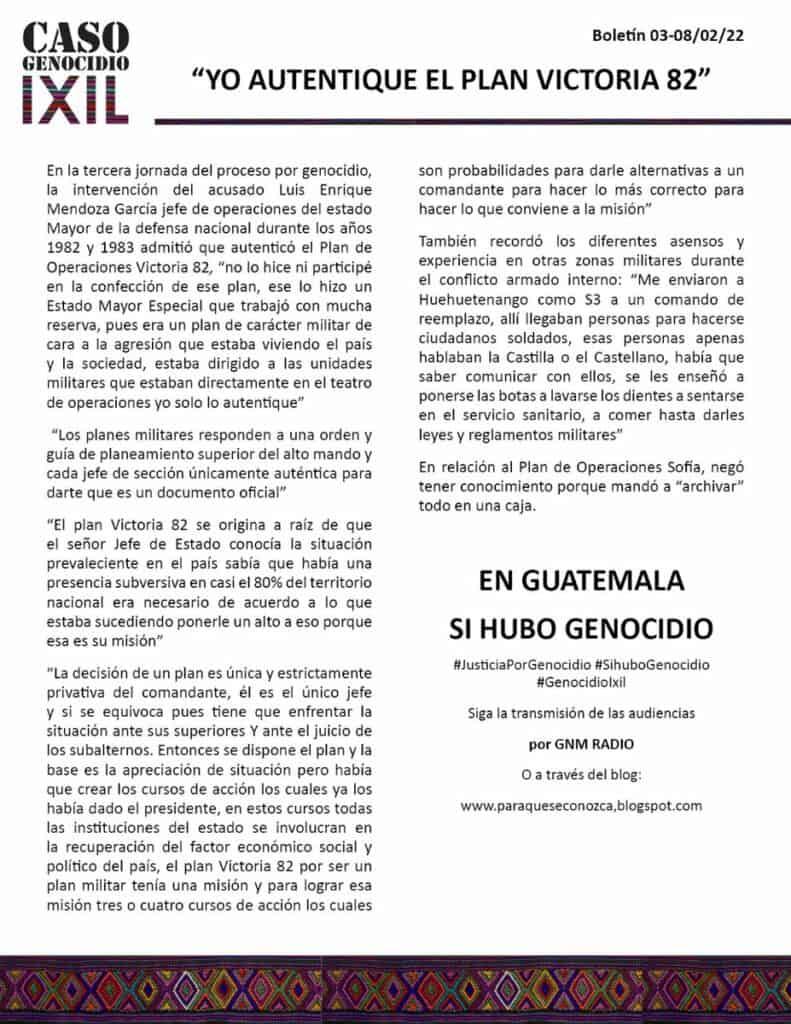