“As a part of these processes of justice where the democratic state and the construction of peace in this country are also being strengthened so that the new generations remember this history and can join in the requests made by the victims and survivors, so that these events never happen again in Guatemala or anywhere else in the world” said the lawyer from the Center for Legal Action in Human Rights (CALDH) at the beginning of their statement during the second day of hearings in the intermediate phase of the case against the military general Luis Enrique Mendoza Garcia, accused of genocide and crimes against humanity.

During the plaintiffs’ statement, emphasis was put on the role played by the defendant, Luis Enrique Mendoza Garcia, who, in carrying out his position, took actions that were decisive in members of the Guatemalan army carrying out military and psychological operations against the non-combatant civilian population.

“Without his participation as head of the third section (G3), the military operations would not have been executed with the dimensions of massive and indiscriminate selective attacks that led to the death of the non-combatant civilian population of the Maya Ixil people,” said attorney Jovita Tzul of CALDH.” Luis Enrique Mendoza Garcia exercised the supervision and control of military operations including participating in the center of joint operations which was one of his primary responsibilities and under his supervision as a part of his scope of work.”

“The chief of the third section, as the chief of operations, prepares the programs and directives; orders the training, planning and the deployment of armies in the field; determines the need for training, the places where it will take place, and the ammunition to be used; plans and conducts inspections of the training activities; and organizes and conducts the necessary courses,” concluded the lawyer.

For his part, attorney Edgar Perez, representative of the Association for Justice and Reconciliation (AJR) said: “The Joint Operations Center establishes that the G3 is responsible for general security and coordination with the other officers of the General Staff and special forces.”

At the end of the statement, the AJR and CALDH agreed that there is sufficient evidence contained in the testimonies of survivors, documentation, and expert reports to send the defendant, Luis Enrique Mendoza Garcia, to oral and public debate as the author of the crimes of genocide and crimes against humanity against the Maya Ixil people.

The next hearing will be held on Tuesday, February 8 at 9:00 a.m. in the High Risk Court C by Judge Silvia de León, during which the defendant, Luis Enrique Mendoza Garcia, will have the right to testify. 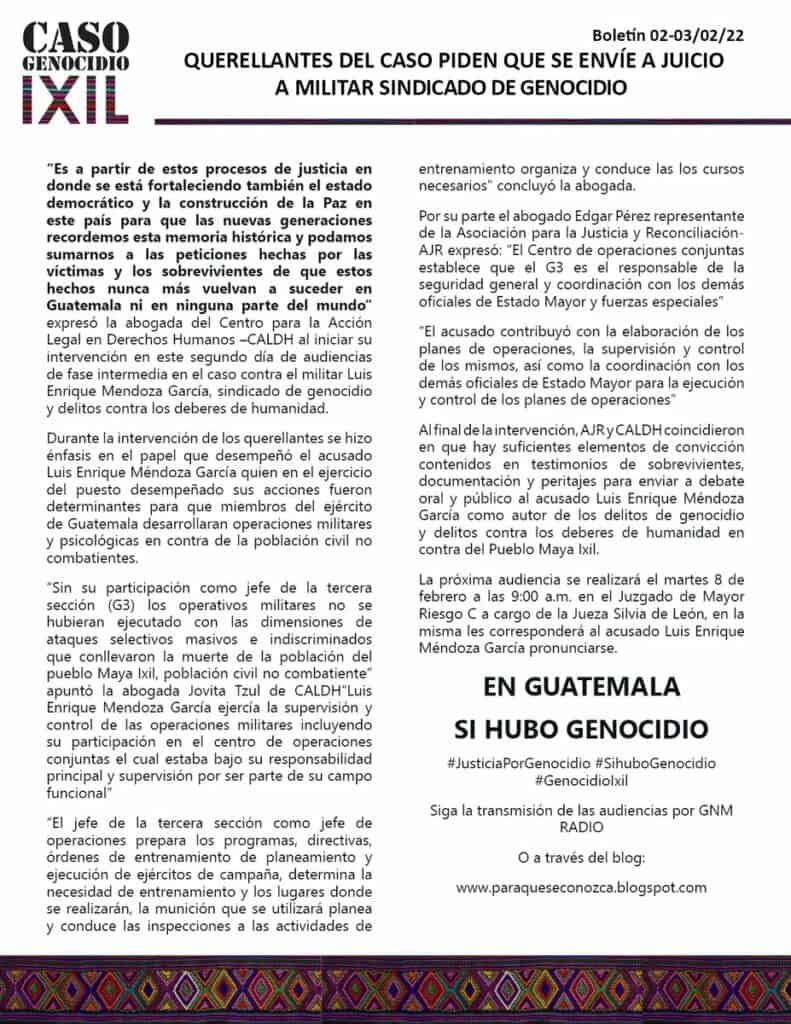