More than a tragic accident: Guatemalan organizations denounce the fire that killed 40 teenage girls at a state-run home

On International Women’s Day, March 8, a fire was set at a state home for children and youth in Guatemala, immediately killing 19 girls. Since then, at least another 21 have died as a result of their injuries and many more continue to be hospitalized.

Survivors have recounted that on March 7, several youth broke out of the Hogar Seguro Virgen de la Assunsión (Safe Home) in an attempt to escape the abusive conditions inside. Reports of extreme sexual violence, physical abuse, neglect, torture, and human trafficking have been documented for several years by children’s rights organizations and denounced with the Guatemala’s Human Rights Ombudsman’s office and at the Inter-American Commission on Human Rights.

After the breakout, police were immediately called to round up the youth who escaped. Fifty-two girls were then locked inside a room; according to one of the survivors, the group of teenage girls started rioting the morning of March 8 after having been locked in the room all night, subject to continued verbal assaults by police outside the door, and prevented from leaving to use the bathroom. Protesting the sexual violence that they face on a daily basis, a mattress was set on fire in the room, setting the room ablaze with the girls inside. Despite pleas as the fire spread, riot police did not open the locked door nor move to allow the girls out. The death toll has now risen to at least 40 teenage girls, between the ages of 12 and 17.

Several state officials have been arrested on charges of culpable homicide, negligence, and child abuse; however, many Guatemalan organizations are pointing to crimes so severe to warrant investigations for crimes against humanity.

Anything but a safe home

The system for child welfare in Guatemala is chronically under-resourced and reports of systemic abuse are rampant. The Hogar Seguro is no exception. Under its roof are children from the ages of 12-17 who have been removed from their homes due to violence and abuse. Several are children with disabilities. Some are youth who had nowhere else to go. Opened in 2010, the center was built for a capacity of 500 children. At the time of the fire, there were over 800 children being housed there.

For more background to the fire, read Francisco Goldman’s account for the New Yorker.

An outcry from civil society

Immediately, organizations and individuals participating in the Women’s Day march began denouncing the fire as a massacre, attributing responsibility to the State for its failure to protect the lives of women and girls in Guatemala and for the many ways that it actively participates in targeting women and carrying out acts of femicide.

On March 9, people gathered outside of the Presidential Palace to denounce the massacre. Credit: Rode Díaz 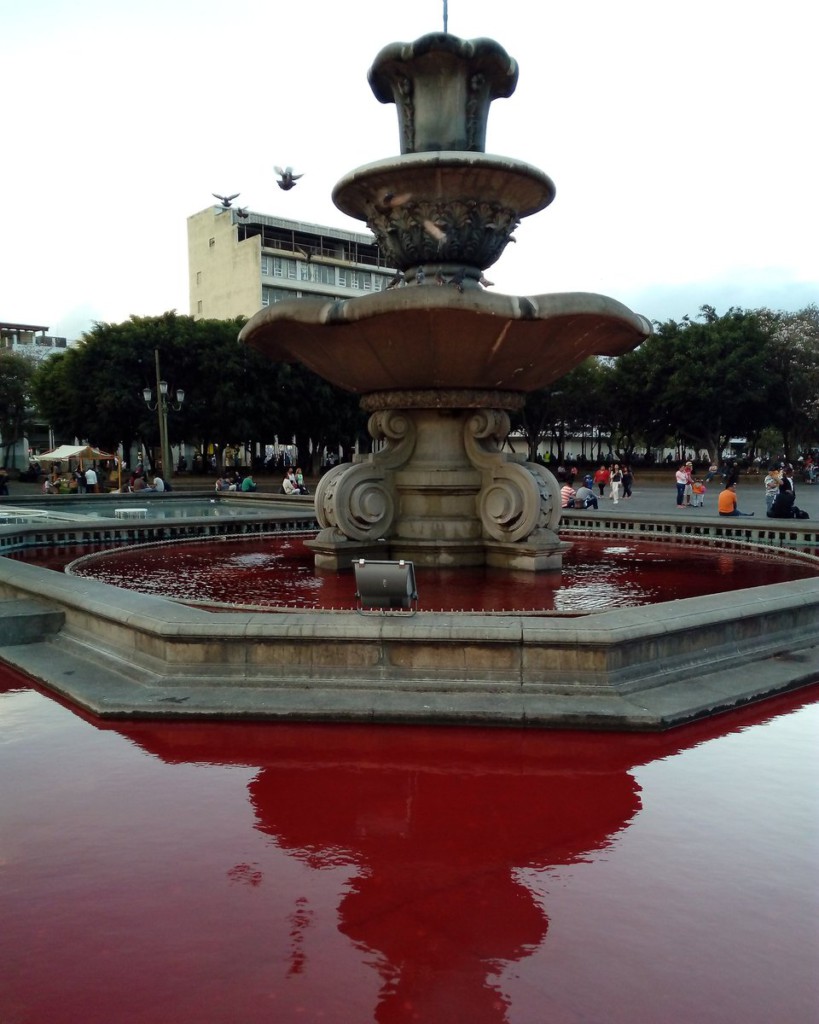 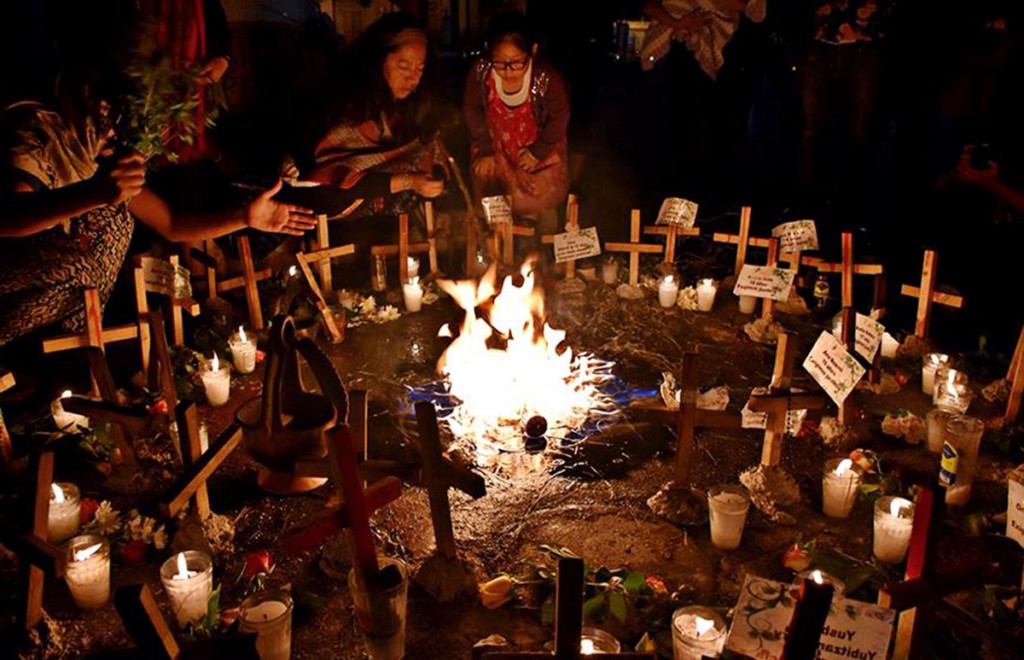 On March 21, people in Guatemala join the international day of action to denounce the massacre. Credit: Prensa Comunitaria

Messages of solidarity from across the world also came pouring in, with demonstrations taking place in front of the Guatemalan embassy in several different countries. See photos and videos from CMI-Guatemala here.

A violence rooted in history

The images of young women locked in a room and left to burn are stark in Guatemala. HIJOS – Sons and Daughters for Identity and Justice Against Forgetting and Silence – released a statement in the days after the fire, honoring the legacy of people who have resisted state oppression and abuse and pointing to the many moments in history during which the response to rebellion has been fire.

“For as long as we can remember, the sons and daughters of Guatemalan peoples – the indigenous, workers, campesinos, the exploited, the impoverished – who have dared to denounce the oppression of the State have been subjected to scorn…In Quiché as in the Verapaces, in Chimaltenango and Panacal, Huehuetenango, in Emaús, and against the campesinos who protested at the Spanish Embassy, everywhere; the response of the State to its people, exiled into misery, has been to set them on fire.

Thousands of our mothers rose up against the abuses of big bosses and large landowners, just as their grandmothers had. Using their example, waves of terror were kept at bay for years as guerrilla fighters, but this was not the future they wanted us to inherit…Today, like yesterday, the punishment for dissidence and resistance to a system that imposes the logic of capital is fear, terror, and fire. Today, children are burned alive; yesterday, a massacre at the Spanish Embassy, razed communities, and crimes committed by the Army. Today, violence and sexual slavery of girls; yesterday, Sepur Zarco. Today, children are kidnapped from their families; yesterday, children of massacre victims are enslaved by officials and soldiers of a genocidal army.” Read the full statement in Spanish.

Likewise, dozens of feminist Guatemalan organizations and individuals signed on to a statement condemning the atrocities and putting it into a historical context.

“We have spent too many years denouncing atrocities, in which defenseless people have been savagely murdered by a state that sets aside the needs of the majority, putting itself at the service of a patriarchal, racist, and exclusionary elite that has maintained power through a collapsed political system.

The fatal fire that killed more than 40 girls and young people in the “Hogar Seguro” Virgen de la Asunción, is the pinnacle of an accumulation of violence that the girls themselves characterized on multiple occasions as hell. Officials had been singled out for committing abuses, rape, torture, and a series of assaults that led to such a disastrous outcome. The allegations and the rebellion of the girls were punished by the death penalty, as they punish anyone who opposes this regime of inequality and corruption.

We condemn this despicable crime that we consider Institutionalized Femicide, given that State agents are involved in acts of extreme violence against the same girls they were obligated to protect and guarantee decent living conditions. This crime generates terror and affects society as a whole. It cannot remain in impunity.”

Updates to the case

In the aftermath, several of NISGUA’s partner organizations are calling for a full investigation into the crimes committed and immediate protection for the girl survivors and other children and youth who were being housed at the Hogar Seguro. In the statement released by HIJOS, they demand that the justice system regard the survivors as protected witnesses and carry out a full investigation into reports of human trafficking, abuse at the home, and possible crimes against humanity. In addition, they are calling for:

Other organizations are calling for a thorough investigation into all of the public institutions that make up the Comprehensive Protection System for Children, to verify the level of responsibility each entity holds for the conditions at the Hogar Seguro prior to the fire, the death of the girls, and afterwards. Organizations are calling for a UN commission to be formed to investigate the incident and the ongoing abuse of children and youth in state-run facilities, that includes the presence of the UN Special Rapporteur on the Rights of Women and the Special Rapporteur on the Rights of Children.

In the statement signed by feminist organizations in Guatemala, they call on society to eradicate all forms of violence. “In every space and moment, [we ask that you] contribute to the eradication of all forms of violence, from derogatory gestures, insults, mistreatment, torture, disappearances, and murders. Each individual in their capacity at their home, work and school environment, religious institution, and social organization, has the responsibility to actively participate so that all forms of violence leave our daily life. Each person has a responsibility to work towards a culture of demilitarization and demand an in-depth disarmament of our society. Do not stop demanding an end to impunity and corruption.”

NISGUA stands with the families of those lost, with those fighting for accountability and repair, and with all who struggle to root out the structures of patriarchal violence and end abuse against women and girls. Follow the hashtags #NiUnaMenos, #LasNinasDeGuatemala, and #FueElEstado to follow the conversation on Twitter and stay tuned for calls from our partners for action.