Statement: We reject the transfer of Prosecutor Hilda Pineda

On October 11, Attorney General Consuelo Porras transferred Hilda Pineda out of her position as head of the Special Prosecutor’s Office on Human Rights, to the Prosecutor’s Office for Crimes Against Tourists.  Hilda Pineda has led several processes that took former dictator Efraín Ríos Montt and other former military officers to face trial for crimes against humanity.

The transfer has been condemned by survivors, relatives of victims, and human rights organizations, as this change may constitute a setback in matters of human rights.  Read the statement from the Genocide Never Again Coalition below.

WE REJECT THE TRANSFER OF PROSECUTOR HILDA PINEDA

Having Hilda Pinea as the head of the Prosecutor’s Office has been fundamental in the uncovering of criminal acts and achieving justice for the victims of serious human rights violations during the Internal Armed Conflict (IAC). In addition to the Special Cases Unit of  the IAC, the  Human Rights Prosecutor’s Office is in charge of important units such as the Unit for Crimes against Justice Agents and Journalists, among others.

It is noteworthy that this change is occuring within the context of attacks to judges and prosecutors, the processing of emblematic justice crimes during the IAC, and the rise of attacks on journalists. For this reason, we express our concerns about this change that may constitute a setback in matters of human rights.

We alert the general public, human rights organizations, survivors of the IAC, journalists, judges and prosecutors, about these facts, to denounce any act that threatens the work carried out thus far. We acknowledge the work of Prosecutor Hilda Pineda and of the team of prosecutors who have demonstrated professionalism in high impact cases. To those who continue doing their work with ethics within the Public Prosecutor Office: you are not alone, you have our support since you have shown that it is possible to judge the powerful who have committed crimes and human rights violations. And to those that attempt to delay and delegitimize the processes of justice in this country, we will not tire of continuing to demand transparency and justice. 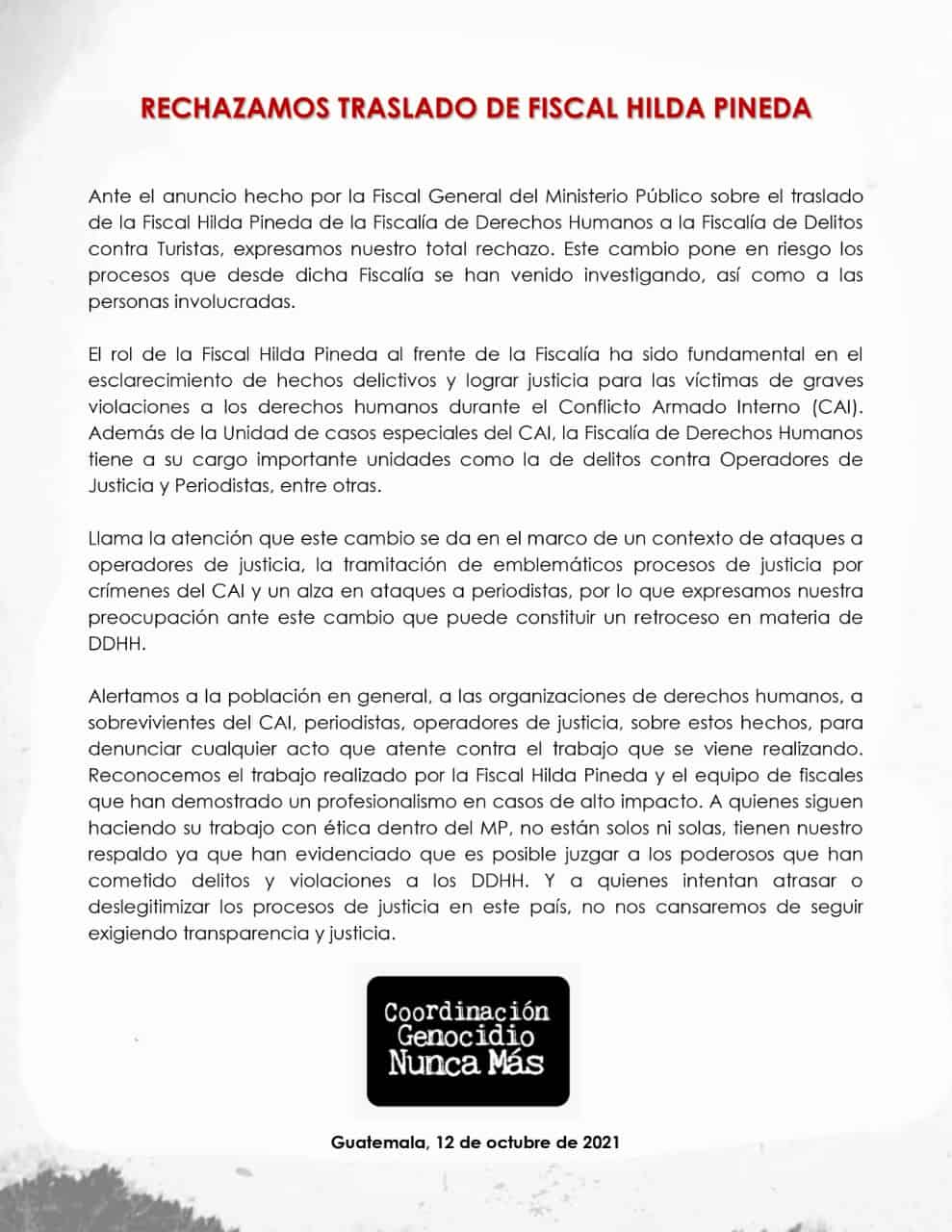