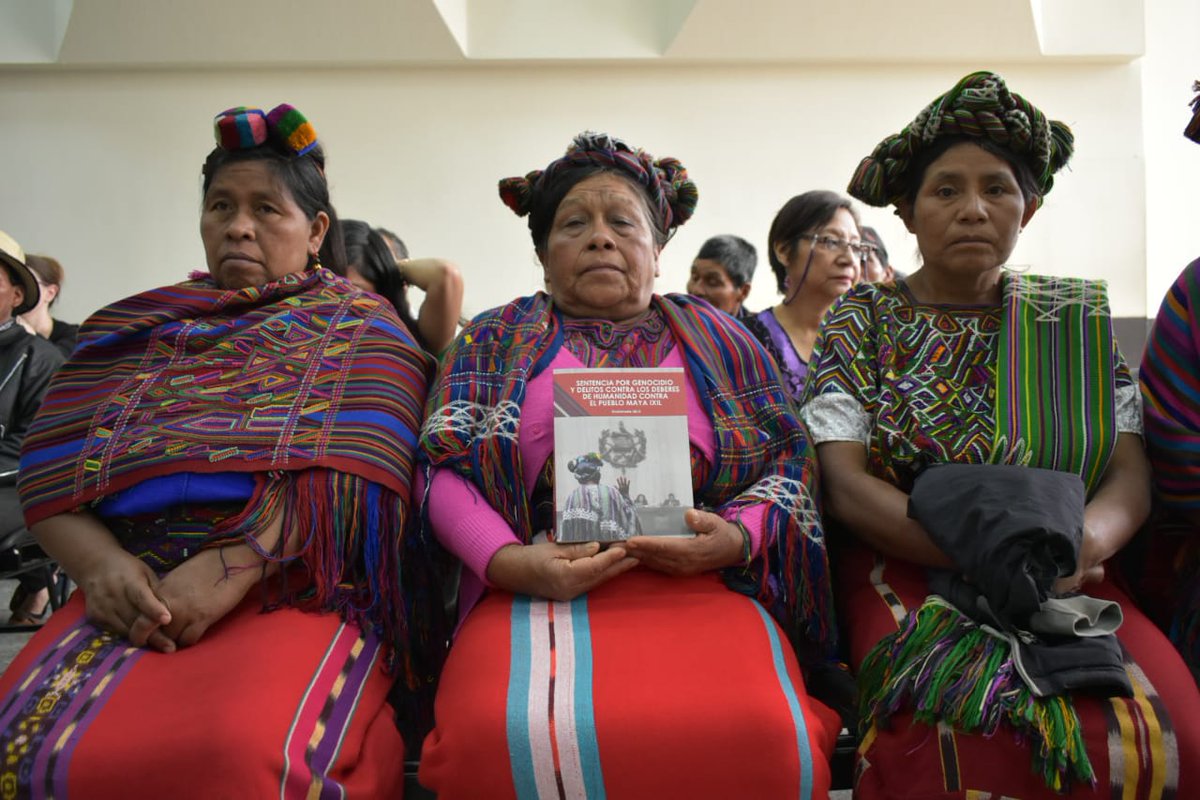 Three Ixil survivors lift up the 2013 sentence in the last day of the retrial against Ríos Montt, following his death.  Photo credit: CALDH

On April 1, 2018, former Guatemalan dictator José Efraín Ríos Montt died of a heart attack at the age of 91. In his death, as in his life, we continue to stand with survivors in remembering him for the genocidal dictator he was.

Though in power for only 17 months between 1982 and 1983, Ríos Montt was responsible for some of the most atrocious crimes committed during Guatemala’s 36-year internal armed conflict. Under his leadership, the Guatemalan military used scorched earth tactics against hundreds of communities, massacred tens of thousands of people, and systematically used sexual violence and forced disappearance to terrorize and silence the population. In 2013, after decades of hard work by survivors to bring him to justice, he was found guilty of crimes against humanity and genocide committed against the Ixil people. He was sentenced to 80 years in prison.

Fighting against such great forces doesn’t come without a cost, however. Ten days after the precedent-setting conviction, the Constitutional Court made an illegal ruling that effectively annulled the sentence. Witnesses bravely returned to a retrial to repeat their testimonies, some for a third or fourth time; it is due to their astounding work and lifelong commitment to justice, carried out amid grave threats, that Ríos Montt died under house arrest while being retried for genocide. Though his death ends the legal prosecution against him, he will forever be remembered for his brutal but ultimately unsuccessful attempt to annihilate the resistance and resilience of those fighting for social justice.

Today, survivors organized with the Association for Justice and Reconciliation (AJR) released the following statement: “For 18 years, we have sought justice for the genocide that the Army committed against our communities and our demand for justice does not end with the death of Ríos Montt. The trial against Mauricio Rodríguez Sánchez, head of Military Intelligence under Ríos Montt, continues. There are also other investigations against those responsible for genocide and other crimes committed during the internal armed conflict…. For us, the sentence emitted by the High-Risk Crimes Court “A” on May 10, 2013, which sentenced Ríos Montt to 80 years in prison for genocide and crimes against humanity, remains valid…We reject the statements made by some people who claim that Ríos Montt died in impunity and free. He died guilty, facing a second trial. History will remember him that way.”

We stand with survivors in upholding the validity of the 2013 verdict and echo their sense of urgency as both the witnesses and the perpetrators of violence advance in age. We join them in calling on the courts to accelerate the pace of the trial against Rodríguez Sánchez and continue investigations into other mid-ranking and high-ranking former members of the military responsible for crimes against humanity.

As a U.S.-based organization, we also remember the role the U.S. government played in extending friendship to Ríos Montt, providing the funds and military training that made such violence possible. The U.S.’ continued complicity in structural violence in Guatemala compels us to stand in solidarity with survivors and work to end U.S. imperialism.

The unceasing efforts of survivors to achieve justice and preserve historical memory from one generation to the next is a testimony to their personal and collective strength and resilience. We invite you join us in expressing solidarity as they continue to fight for justice.

NISGUA has provided human rights accompaniment to the AJR since 2000 and will continue to stand in solidarity with survivors and witnesses, using international accompaniment and grassroots advocacy to support the ongoing work of human rights defenders seeking justice and accountability for genocide and crimes against humanity.