Statement by genocide survivors on the death of Ríos Montt

On April 1, 2018, former Guatemalan dictator Efraín Ríos Montt died from a heart attack at the age of 91. Having initially been convicted in 2013 of genocide and crimes against humanity against the Ixil people, he died under house arrest facing a retrial. Today, survivors organized with the Association for Justice and Reconciliation (AJR) made a statement on the death of Ríos Montt and called on supporters to continue to stand in solidarity as they demand justice. For the original statement in Spanish, see below. Translation by NISGUA.

THE IXIL PEOPLE WILL CONTINUE TO DEMAND JUSTICE

The Association for Justice and Reconciliation (AJR) and the victims and survivors of the Ixil genocide state:

For 18 years, we have sought justice for the genocide that the Army committed against our communities and our demand for justice does not end with the death of Ríos Montt. The trial against Mauricio Rodríguez Sánchez, head of Military Intelligence under Ríos Montt, continues. There are also other investigations against those responsible for genocide and other crimes committed during the internal armed conflict.

For us, the sentence emitted by the High-Risk Crimes Court “A” on May 10, 2013, which sentenced Ríos Montt to 80 years in prison for genocide and crimes against humanity, remains valid. As such, Ríos Montt died under house arrest, having been convicted. We reject the statements made by some people who claim that Ríos Montt died in impunity and free. He died guilty, facing a second trial. History will remember him that way.

It is unfortunate that the victims and their aggressors are dying before there is justice. So far, five witnesses in the genocide case have died, as have three high-ranking members of the military responsible for the crimes committed between 1982 and 1983. This situation demonstrates the State’s lack of political will to guarantee justice for survivors of the genocide and the crimes committed during the internal armed conflict.

In the Peace Accords, the State committed to prosecute those responsible for grave human rights violations committed against the civilian population, particularly against women, children, and people living in the countryside. Nonetheless, the State continues to deny what happened and delay justice for the victims, in particular the Ixil people. 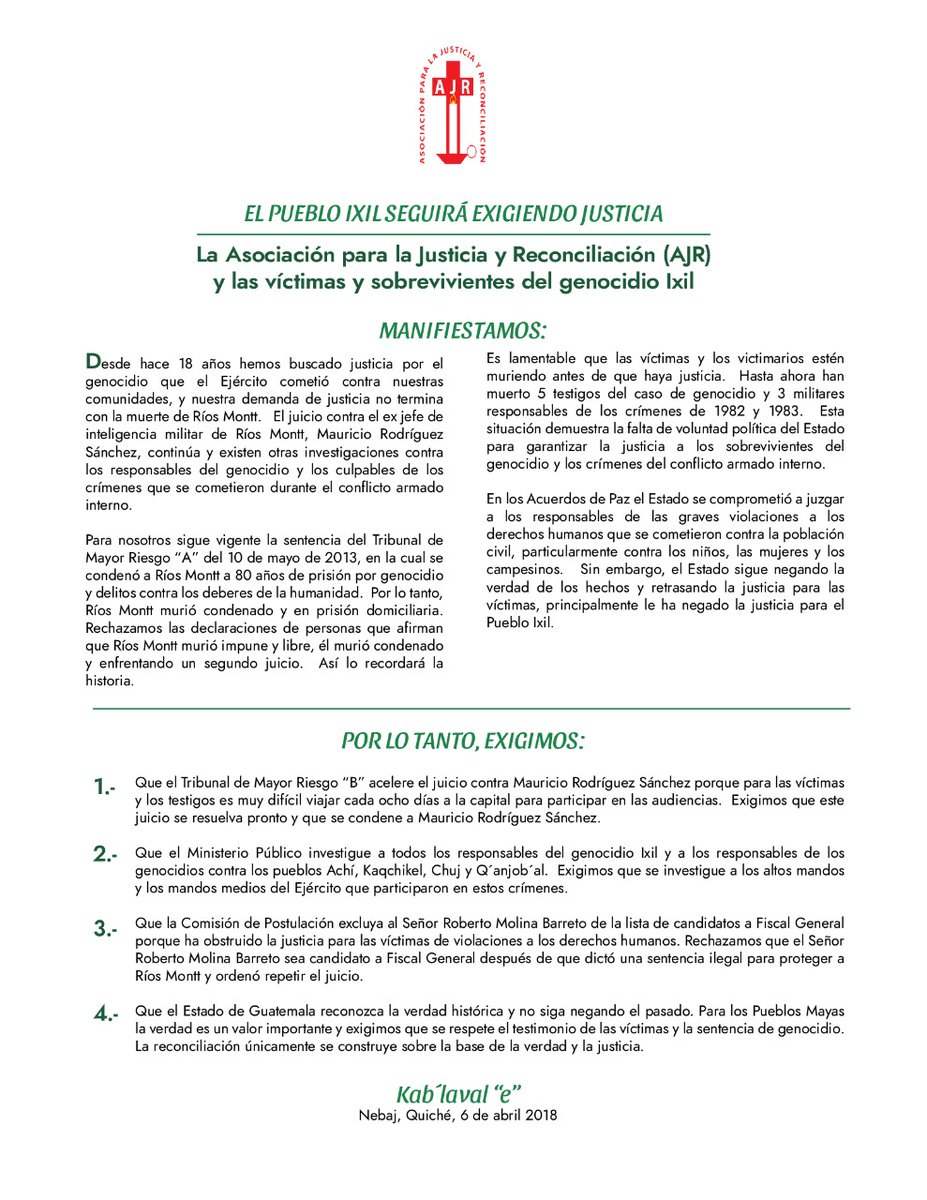