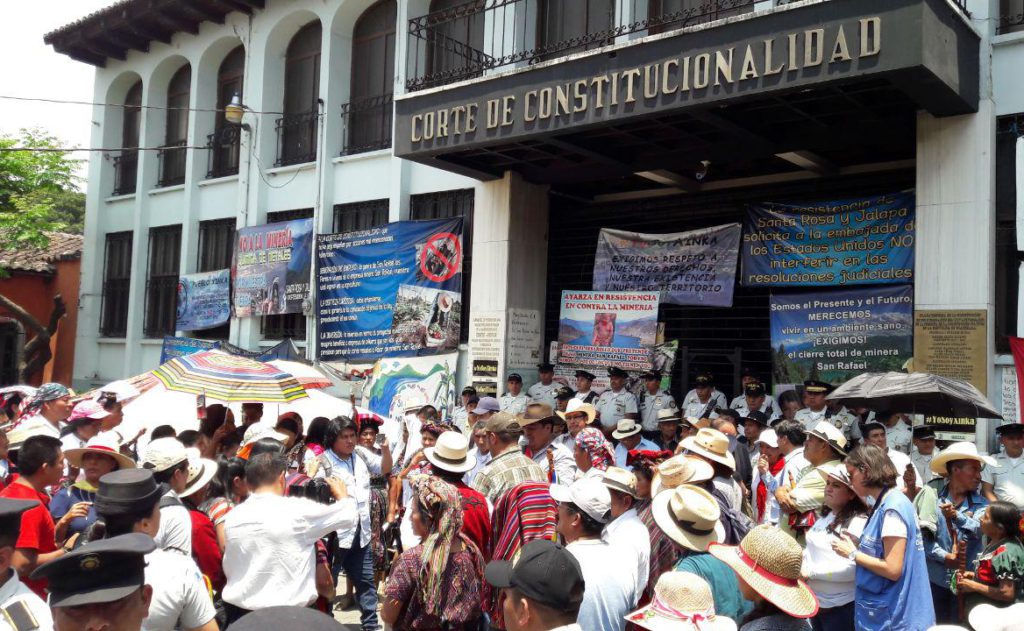 Thousands gather in front of the Constitutional Court in Guatemala City, demanding the closure of Tahoe Resources’ Escobal mine and the respect for the self-determination of the Xinca People.

On Monday April 9, thousands took to the streets in Guatemala City as part of the “March for Life,” organized by the Xinca Parliament and the Peaceful Resistance of Santa Rosa, Jalapa and Jutiapa. Representatives from the indigenous Maya Ch’orti’, Ixil, Quiche and Garifuna Peoples showed up in support of the Xinca People and their call for the permanent closure of Tahoe Resources’ Escobal silver mine located in Xinca territory.

The Guatemalan courts temporarily suspended the mine over eight months ago as part of ongoing legal proceedings to determine if the Xinca People’s right to consultation was violated in granting the mining license in 2013. The courts will also determine if the Guatemalan Ministry of Energy and Mines discriminated against the Xinca People by justifying the lack of consultation by denying their very existence in the region. The case is currently being decided by the Constitutional Court that most recently ordered several Guatemalan academic institutions to carry out anthropological studies to determine the existence of indigenous people in San Rafael Las Flores, the municipality where the mine is located.

Mayor of Nueva Santa Rosa speaks to #Guatemalan Constitutional Court @ #MarchForLife. "You must make your decision with the People in mind, a People that you can't deny because they are here today" referring to discrimination of Xinca People by granting of #Escobal mining license pic.twitter.com/niHetGz4pB

Read the full press release below, translated from the original statement in Spanish by NISGUA, Earthworks and MiningWatch.

Parliament of the Xinca People of Guatemala

From the Parliament of the Xinca People of Guatemala and the Peaceful Resistance of Santa Rosa, Jalapa and Jutiapa, in anticipation of the Constitutional Court’s conclusive resolution on the final appeal concerning proceedings over the “El Escobal” project operated by Minera San Rafael [Tahoe Resources’ wholly-owned Guatemalan subsidiary].

Let it be known that:

Given the above, we call for:

WE ARE A PEOPLE OF PEACE THAT DEFENDS OUR TERRITORY

And as long as our demands are not heard, we will continue in permanent resistance.

Voice of the Xinca Guatemalan Nation