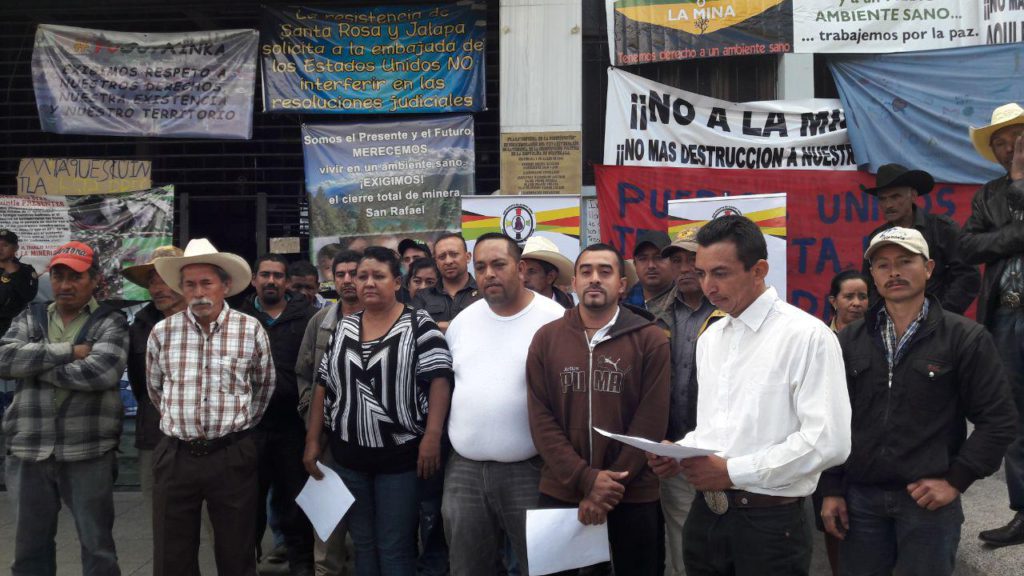 Members of the Peaceful Resistance of Santa Rosa, Jalapa, and Jutiapa at a press conference in front of the Guatemalan Constitutional Court on February 21, 2018.

The following article was co-written by MiningWatch Canada, Network in Solidarity with the People of Guatemala (NISGUA), and Earthworks.

It has been seven months since operations at Tahoe Resources’ Escobal mine have been suspended and, once again, residents are speaking out about what they perceive as a further attempt on the part of the company and its supporters to provoke conflict, delegitimize their right to peaceful and lawful protest, and undermine the independence of a judicial process over two of the company’s licenses.

Below is a translation of a press release from the Xinka Parliament and the Peaceful Resistance of Santa Rosa, Jalapa and Jutiapa concerning an incident on Thursday February 15th in which representatives of Tahoe’s Guatemala subsidiary, Minera San Rafael (MSR), were stopped and questioned by local residents in El Tablón in the municipality of Casillas. The situation occurred after company representatives, accompanied by private security, reportedly refused to answer community member’s questions regarding the purpose of a meeting they had just held with a handful of coffee growers near Ayarza, a community located in the mountains near the Escobal mine.

The statement denounces Tahoe for continuing work in the region, despite a judicial decision suspending operations since July. They consider this incident, and others leading up to it, to be acts of provocation from company representatives and supporters seeking to elicit a negative reaction from communities who already feel under threat as they defend their water, land and way of life in a context marked by tension, violence and criminalization since 2011.

Miguel Colop Hernádez from the Office of the Human Rights Ombudsman (PDH) told Guatemalan media about how his office mediated the incident in El Tablón, stating that residents were “acting in defence of their rights” when they stopped the Tahoe representatives along the road insisting that they identify themselves and that they respect the suspension. In contrast, a sensationalist article published Friday in a UK newspaper that has been banned as a reference by Wikileaks describes the incident as a terrifying hostage-taking by a gang of armed men. The Guatemalan human rights official, on the other hand, made no mention of violence or threat of violence in his report, stating that the incident was resolved through dialogue and that the company representatives were freed immediately.

Translation of the original press release in Spanish from the Xinka Parliament:

To the media, diverse companies, State Institutions and the general public:

Statement from the Parliament of the Xinca People of Guatemala and the Peaceful Resistance of Santa Rosa, Jalapa, and Jutiapa regarding events that occurred last Thursday, February 15th in the community of El Tablón, municipality of Casillas, Santa Rosa.

Let it be known:

Given the above, we publicly denounce:

Therefore, we call on: