Nearly a year has passed since the March 2017 indictment of five former high-ranking officers in the Guatemalan military for crimes against humanity. They stand accused of having participated in the illegal detention, torture, and sexual assault of Emma Guadalupe Molina Theissen and the forced disappearance of her 14-year-old brother, Marco Antonio in 1981. Today, the public trial opens.

Speaking at a press conference yesterday, the Molina Theissen family read a prepared statement on the violence their family and countless others have faced during and since the armed conflict: “Uncovered war plans show that women were targeted as a military strategy….When women of the resistance were identified and detained, they were immediately subjected to sexual violence in an attempt to break their sense of self, their will, and diminish their human dignity.” 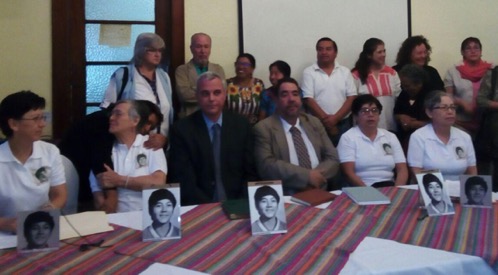 The Molina Theissen Family speaks at a press conference in Guatemala City.

They pointed to the military’s efforts to curb the activism of future generations by forcibly disappearing children. “More than 5000 children were disappeared as a result of the State’s counter-insurgency strategy to exterminate the seeds of resistance in the country…[By disappearing Marco Antonio] they committed an act of revenge as punishment, to annihilate the seed of a family considered to be an internal enemy during that reign of terror in Guatemala.”

The experiences of the Molina Theissen family highlight two key aspects of the military’s counter-insurgency strategy used to different degrees throughout the internal armed conflict. It demonstrates how the army used sexual violence as a weapon against the women they detained and sheds light on how the military forcibly disappeared children in an attempt to both silence dissent and prevent future activism.

Many of the accused are also facing charges in other high-profile cases. Benedicto Lucas García has been indicted on charges of forced disappearance and crimes against humanity in the Military Zone 21 case, after hundreds of human remains were exhumed from mass graves in Cobán. Manuel Callejas y Callejas is also facing accusations of corruption related to his participation in La Cofradia – a type of clandestine parallel state structure started by military intelligence officials under the Lucas García presidency.

Pursuing charges against such high-ranking former members of the Guatemalan military – many of whom still retain strong political and economic power in the country – is not without risk and the Molina Theissen family has faced physical intimidation and defamation as a result. Military supporters that came to the pre-trial have yelled obscenities at plaintiffs and the family and have photographed them. In other trials where similar intimidation tactics were carried out, plaintiffs were then subjected to significant online abuse after having their photos posted. Defense lawyers have also publicly made misogynist claims that the family is to blame for the actions carried out by the military.

Despite these efforts to silence them, members of the Molina Theissen family stand committed to this step in their ceaseless struggle for justice for Emma and for Marco Antonio. Through this case, there is an opportunity to achieve state recognition of some of the many crimes against humanity committed during the Lucas García regime. The family hopes to not only achieve a guilty verdict against the five military officials, but want to learn the whereabouts of Marco Antonio so that they may finally give him a proper burial. As the family enters the trial, they call on international and national organizations to stand in solidarity with them. “It’s important to have a constant presence and support for our family, who has been in the struggle for justice for decades. It’s one more way to fight impunity in this country.”

NISGUA is providing ongoing coverage of this case, in partnership with the Center for Human Rights Legal Action (CALDH). Follow us on Twitter, Facebook, and our blog for updates on this and other emblematic cases for justice in Guatemala.