This article was originally written by Carlos Juarez for gAZeta magazine on January 2020. You can read the article on Spanish here.

Since the publication of this article no further arrest has been made. On the contrary, several defendants have requested their release from preventive detention,  claiming that due to the COVID-19 pandemic the court should move them to house arrest. It is worth noting that one important argument of the survivors’ lawyers is  that granting this request would increase the risk of escape of the accused.

Until this date, there have been seven scheduled hearings in which the defendants have requested substitutive measures.  All of these requests have been rejected, given that Guatemalan constitutional laws, as well as  international human rights standards, prohibit the granting of substitute measures in cases involving crimes against humanity.

On January 6, 2016, a late news bulletin shook Guatemala. The media reported on the capture of several former military personnel for crimes against humanity.

The case was named Creompaz, which is the Regional Command of Peacekeeping Operations, located in the former Military Zone 21 of Cobán, Alta Verapaz. In that place the Public Ministry, with the accompaniment of human rights organizations, carried out exhumation of remains buried during the Internal Armed Conflict in Guatemala.

A clandestine cemetery disguised as a military zone confirms the policies of terror applied by the military during the war. But above all it confirms the indiscriminate violence applied as a counterinsurgency policy during the conflict, directed mainly at the unarmed civilian population. Again Indigenous peoples were at the center of state violence. 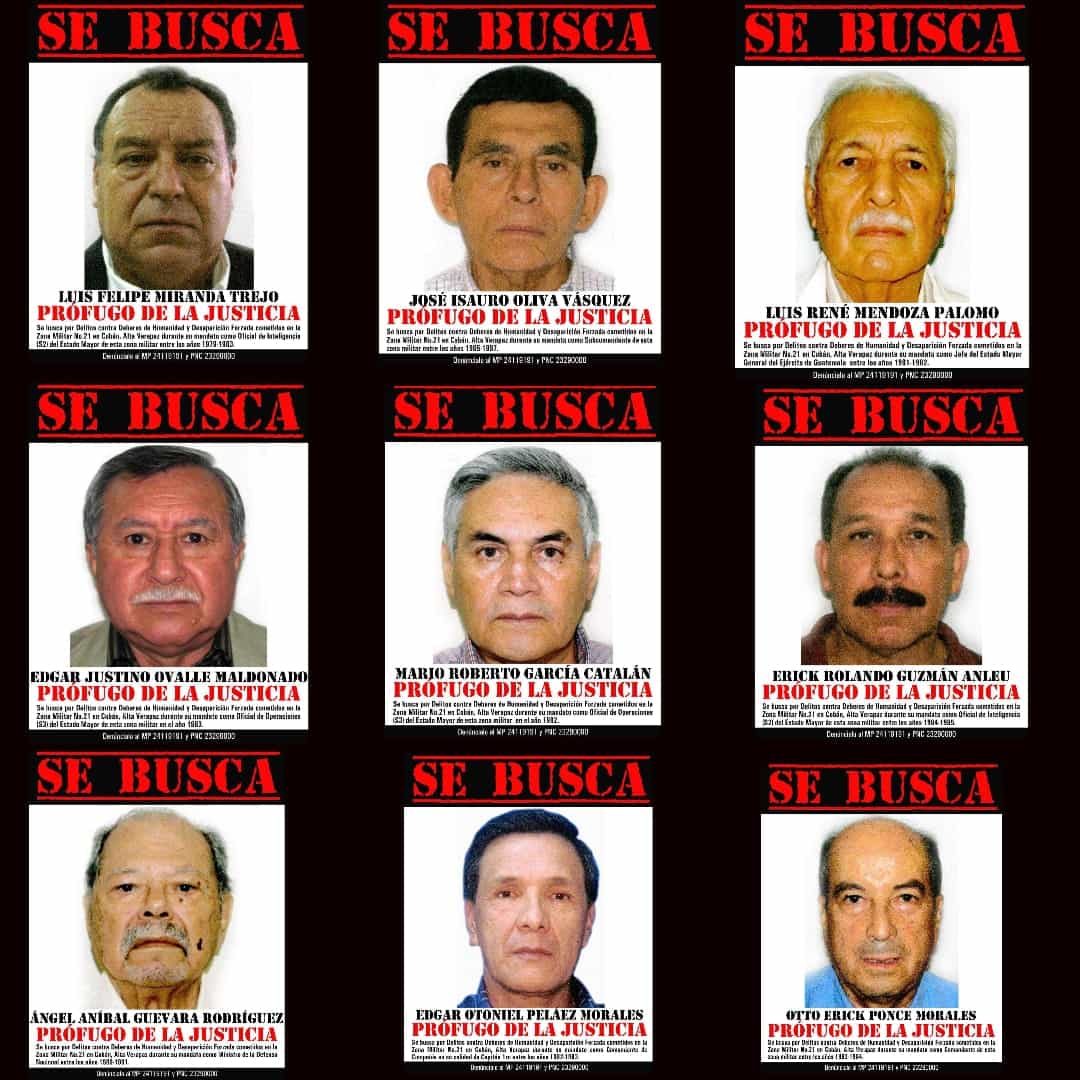 That is why, when the news of the arrests flooded the media, thousands of relatives of the victims of the conflict regained hope. Their hearts were stirred by the possibility of finally finding justice for their loved ones.

One of the ex-military men monopolized the cameras––the fearsome Benedict Lucas García, former Minister of Defense and brother of former President Romeo Lucas García. He was one of the biggest thugs during the 70s and 80s, known as one of the main architects of the fight against the guerrillas, who used methods that constitute crimes against humanity.

Another person named in the case walked fearlessly through the halls of Congress––Edgar Ovalle, deputy of the official party, who had enjoyed immunity, is also under investigation by the Public Ministry for his responsibility in the events that happened in Creompaz.

His impunity allowed him to remain calm for a time but now he has lost it, and today he is a fugitive from justice. The captures were good news for justice, but the process has not been easy and the outlook for the future is not encouraging.

Claudette Dominguez is the appointed judge for the case. Her actions have been disastrous; she has left many families, witnesses and evidence out of the process, hindered the work of investigators, and overall is a slap against the victims’ hopes for justice.

The defendants’ defense teams have filed countless legal motions to block progress on the case, using malicious litigation to delay court procedure––in the manner of all the military’s defenses.

Some of the defendants have already benefited from the judge’s incompetence, and this undercuts the witnesses and relatives of the victims.

Besides that, military families and pro-military groups have orchestrated a strategy to spread hate speech on social networks, discrediting the search for justice by the families, legal advisers, and human rights organizations involved in the case.

The current head of the Public Ministry is not encouraging either. Consuelo Porras does not have the same determination as her predecessors that headed such an important agency.

Four years have elapsed since the arrests in the Creompaz case, however, the process continues to be trapped in an infinite number of legal remedies, which prevent public deliberations. Despite the fact that the victims have waited almost four decades to achieve justice, the emotional burnout is great, lowering hopes and revictimizing those involved in the process.

One of the saddest things is the issue of fugitives. Nine ex-military personnel pointed out by the Public Ministry are fleeing the law. This is the famous “military honor”: they boast of discipline and bravery, but they run when facing justice. They never thought justice would find them because of their military positions during the years of war, which gave them limitless powers––including deciding who lived and who did not.

Perhaps the case of Edgar Ovalle is the saddest and most representative of these military violators of human rights. Several years after receiving judgment he again found himself in a position of power, this time enjoying immunity as a deputy in the National Congress.

A year had to pass to remove his immunity, enough time for him to plan his escape from justice. Ovalle represents what the structures of power and impunity are in Guatemala, since he violated the human rights of many people during decades of conflict, but continues to be in positions of power that allow him to travel the world without facing consequences for his actions.

Edgar Ovalle is a founder of the party that brought to power the nefarious Jimmy Morales; is responsible for deaths and enforced disappearances when he was a high-level official in Cobán, Alta Verapaz; is a member of the government’s close circle and is today a fugitive from justice.

It is clear to the victims of Creompaz that the search for justice is not easy, but it is also true that they will never give up their mission, mainly because they are motivated by the greatest thing that can exist––their love for their relatives who were forcibly disappeared by the Army of Guatemala.

For this reason, the victims of the Armed Conflict and society in general will appreciate any information that allows them to find the fugitives in the Creompaz case. Do the country a favor, and share information if you have it. It is a citizen’s duty to work with the authorities to lock up criminals. 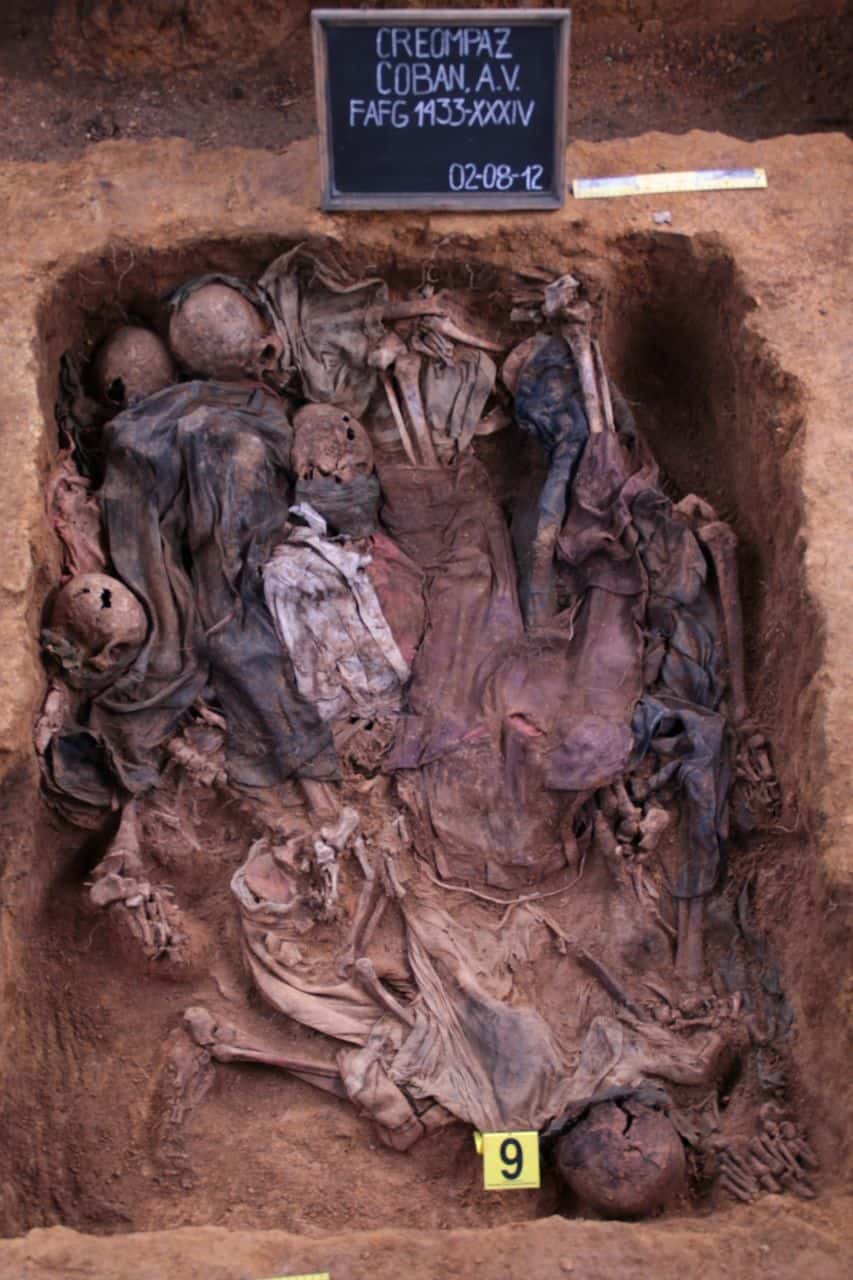 Picture of one of the mass graves found at CREOMPAZ. Photo-credit: CPR-Urbana