Following the news that eleven alleged perpetrators in the Military Diary case have been detained on May 27 of 2021, we express our solidarity with the family members of the disappeared people. These family members have struggled for 38 years to discover what happened to their loved ones who were disappeared by the Guatemalan state during the Internal Armed Conflict and whose information was later revealed in 1999 in the Military Diary.

We share the words and demands of the relatives and we hope that this is just the first step of many to assure their rights to the truth, to access to justice, to knowing the locations of the disappeared people, and a guarantee that these crimes will not be repeated.

“[We write] within the context of the arrests and raids carried out yesterday against people accused of serious crimes against humanity related to the Military Diary case, or the Dossier of Death, a document created by Guatemalan military intelligence. The Military Diary contains verified information on the surveillance, arrests, extrajudicial executions and forced disappearances of people who, due to their commitment to the defense of human rights and their aspirations to have a better nation, were systematically and brutally repressed.

These acts, classified as some of the most heinous crimes, were executed by agents of the Guatemalan State during the de facto military government of Oscar Humberto Mejía Víctores from 1983 to 1985.

The families of the victims of State policies during the Internal Armed Conflict, in the Military Diary Case

Before the public opinion, we declare:

For more than 37 years, we have fought to clarify and learn the truth of what happened, as well as to find the material and intellectual authors. From the moment our relatives were illegally detained, we denounced before the national justice system. Later, facing the denial of justice, in 2005 we went to the Inter-American Court of Human Rights (IACHR). Finally, in December 2012, the Inter-American Court issued a sentence which, within the measures that guarantee non-repetition, mandates that the Guatemalan State investigate to find out what happened and that the criminals pay for and repair these acts.

The Guatemalan State must adopt the necessary measures to dismantle structures linked to crime, corruption, and impunity that have operated for decades. It must modify its procedures to guarantee the non-repetition of serious human rights violations, above all in a context in which the defense of human rights, organizing, and resistance are once again being criminalized.

With high expectations and trust that justice will prevail and prevent impunity from continuing in this case, we salute the justice system, in particular the Human Rights Public Prosecutor, for the actions taken against high ranking officers of the Guatemalan Army. Above all, because transitional justice regarding crimes against humanity is a pending debt in Guatemala.

We reaffirm our commitment to the demand for justice, so that powerful groups entrenched in the Guatemalan system, which are also linked to crimes of corruption and impunity, are tried and sentenced in court within the framework of due process. These are rights that the men, women and children included in the Dossier were not given.

We demand that the State guarantee the integrity of the families of the victims and survivors, who are continuously attacked by members of the Pact of the Corrupt through lists and attacks on social media for their work in the defense of human rights.

Clarifying what has happened and convicting those responsible will allow us to achieve the justice for which we have yearned for decades. It will bring the Guatemalan State a step closer to the advancement and guarantee of human rights and, above all, non-repetition. Thinking differently and dissenting is not a crime; that is why we will continue to vindicate the militancy of our family members. Our fight for and commitment to the search for memory, truth, justice and the presentation of our relatives is stronger today than ever before.”

NOBODY CAN SILENCE THE DISAPPEARED, UNTIL TRUTH AND JUSTICE ARE FOUND 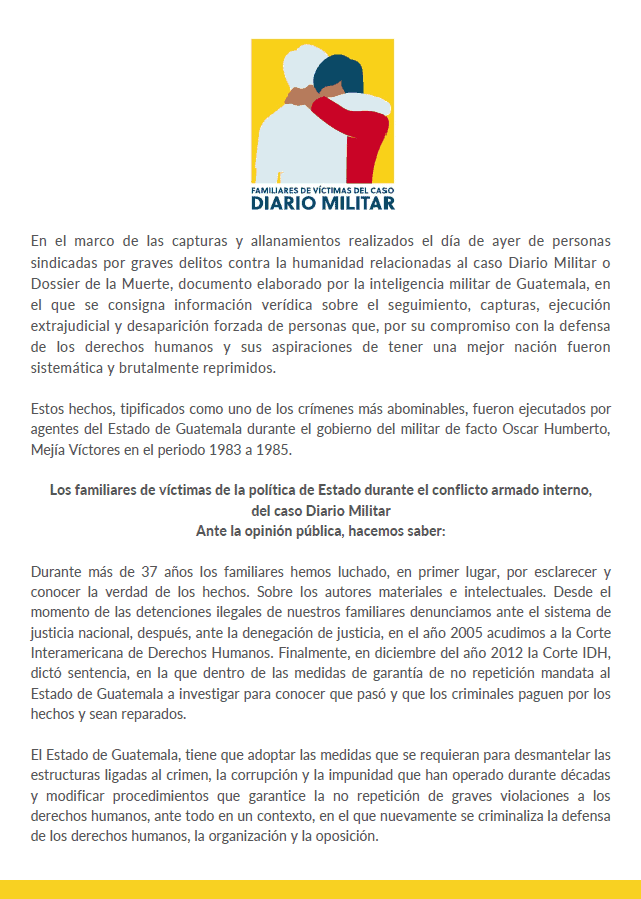 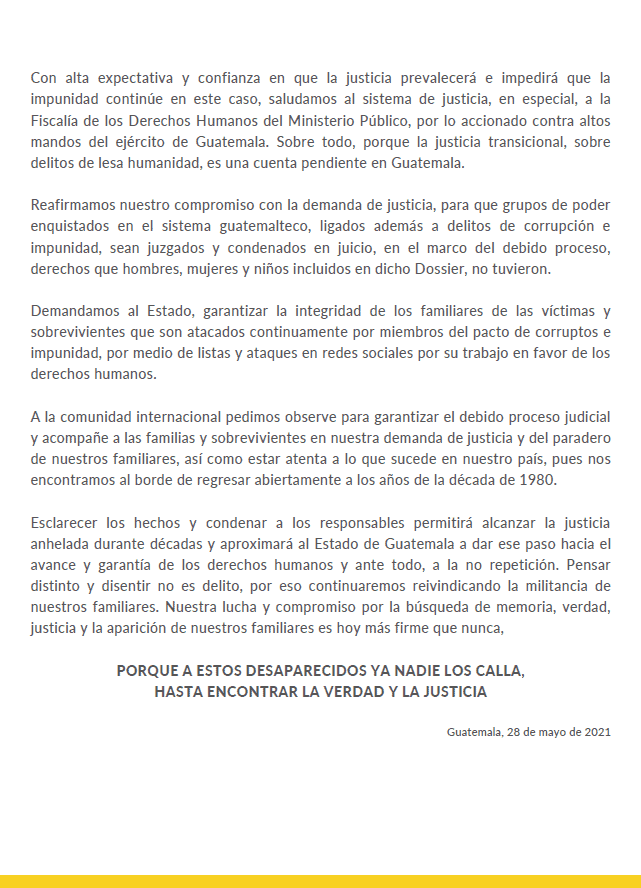