Statement: A light of hope in 37 years of impunity 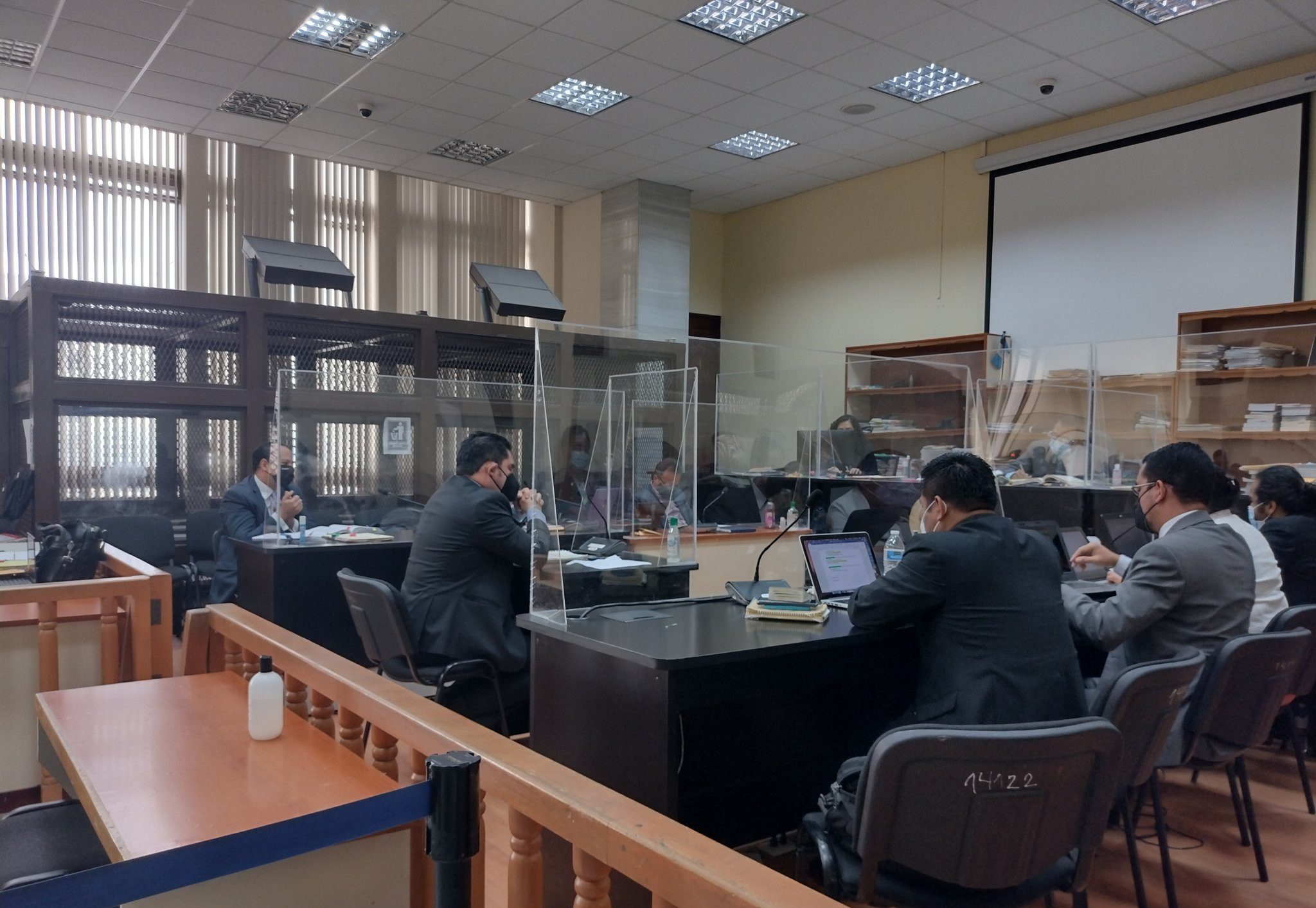 Lawyers and plaintiffs present in the Judicial Room during the First Declaration Hearing of the six former military and police indicted for crimes against humanity in the Military Diary Case. Photo Credit: FAMDEGUA

From June 1-10, pre-trial hearings in the Military Diary Case were held for six of twelve recently arrested former military and police officials. The Military Diary  lists the names of 183 people who were captured and forcibly disappeared between 1983-1985 and provides evidence of the State’s systematic use of forced disappearance, torture, and extra-judicial killings against the civilian population. The accused are on trial for a variety of crimes, including forced disappearance, kidnapping, torture, murder, crimes against humanity, and sexual violence.

The judge presiding over the case, Miguel Ángel Gálvez, indicted the six accused, ruled that they would remain in pre-trial detention during the process, and gave a three-month period for completing investigations before the start of the intermediate phase in mid-September. Another six people arrested in this case remain in detention in other cities or hospital facilities, awaiting their first declaration hearing.

These hearings are a fundamental step forward for attaining justice for the relatives and victims in the Military Diary Case. We stand in solidarity with those seeking truth and justice for their loved ones.

A light of hope in 37 years of impunity

Since the sentence in the case for Genocide, in which structural racism against the Indigenous population was proven, as well as other aspects of State violence, the case of the Diario Militar, or ‘Death Squad Dossier’ is not only historic, but also emblematic, because it contributes the necessary elements in evidencing the behaviour of the clandestine and illegal structures of intelligence which carried out State terrorism in Guatemala. The events identified by the Public Prosecutor reaffirmed the behaviour of the elite operational groups under the direction of the “G2” military intelligence and of the Presidential General Staff.

The charges of the Public Prosecutor describe the mode of operation of the State security forces in which they put down, repressed and eliminated persons who were categorised as internal enemies, including children, pregnant women, and the elderly, subjected them to torture, terrible verbal, physical, psychological and sexual violence, extrajudicial execution and, finally, forced disappearance, one of the most unbearable crimes.

These persons were our family members who dared to think differently, to dream, to aspire, to build a country for all people, in which the wounds of inequality and injustice were changed so as to attain human dignity.

In light of the decision made by the Judge Miguel Ángel Gálvez, in which he indicted and remanded in custody, Edgar Corado Samayoa, Rone René Lara, José Daniel Monterroso Villagrán, Edgar Virginio de Leon Sigüenza, Enrique Cifuentes de la Cruz, and Jacobo Esdras Salán Sánchez, retired military personnel implicated in grave human rights violations as described in the charges of the Public Prosecutor related to the case of the Diario Militar.

Family members of the victims of the Diario Militar Case make known to public opinion:

We recognise the important advance for justice in this case, which has seen 37 years of impunity, of silence, of continuity, even that the whereabouts of the remains of our loved ones are even today unknown.

We trust in the investigation carried out by the Human Rights Ombudsman, of the Public Prosecutor, and  corresponding bodies, to guarantee due process leading to justice, objective, certain, and restorative, that we, the families and survivors, deserve. In this matter, we express our profound rejection of the attempts to guarantee impunity for the criminals who committed crimes against humanity, kidnappers, torturers and violators, through wrongful, unconstitutional legislation, detrimental to national legislation and agreements adopted by the Guatemalan State in the context of human rights.

We demand to know the truth of what happened and the whereabouts of our family members, those victims of forced disappearance identified in the Diario Militar Case, as well as the 45,000 victims of this terrible crime, among them, 5,000 children, whose families still search for them and who still hope.

We demand the guarantee of physical integrity of the families, plaintiffs, lawyers, prosecutors and judge involved in this case.

We appreciate the invaluable accompaniment and demonstrations of solidarity of social organisations, human rights, victims of the Internal Armed Conflict, of the international community, as well as coverage from national and international media which have been present during the indictment hearing which took place over eight days.

Justice and human rights are undeniable, what is sought is justice for crimes committed and guarantees of no repetition so that Guatemalan society is never again repressed by the forces of public order under the umbrella of agreements, legislation, plans or policies which describe people as internal enemies and that no State budget is again used to repress, torture, violate, and disappear the population.

At 37 years of impunity, this is an historic moment for memory, for truth and for justice, for those disappeared that can no longer be kept quiet, because to think differently is NOT a crime.

Families of Victims of the Diario Militar Case 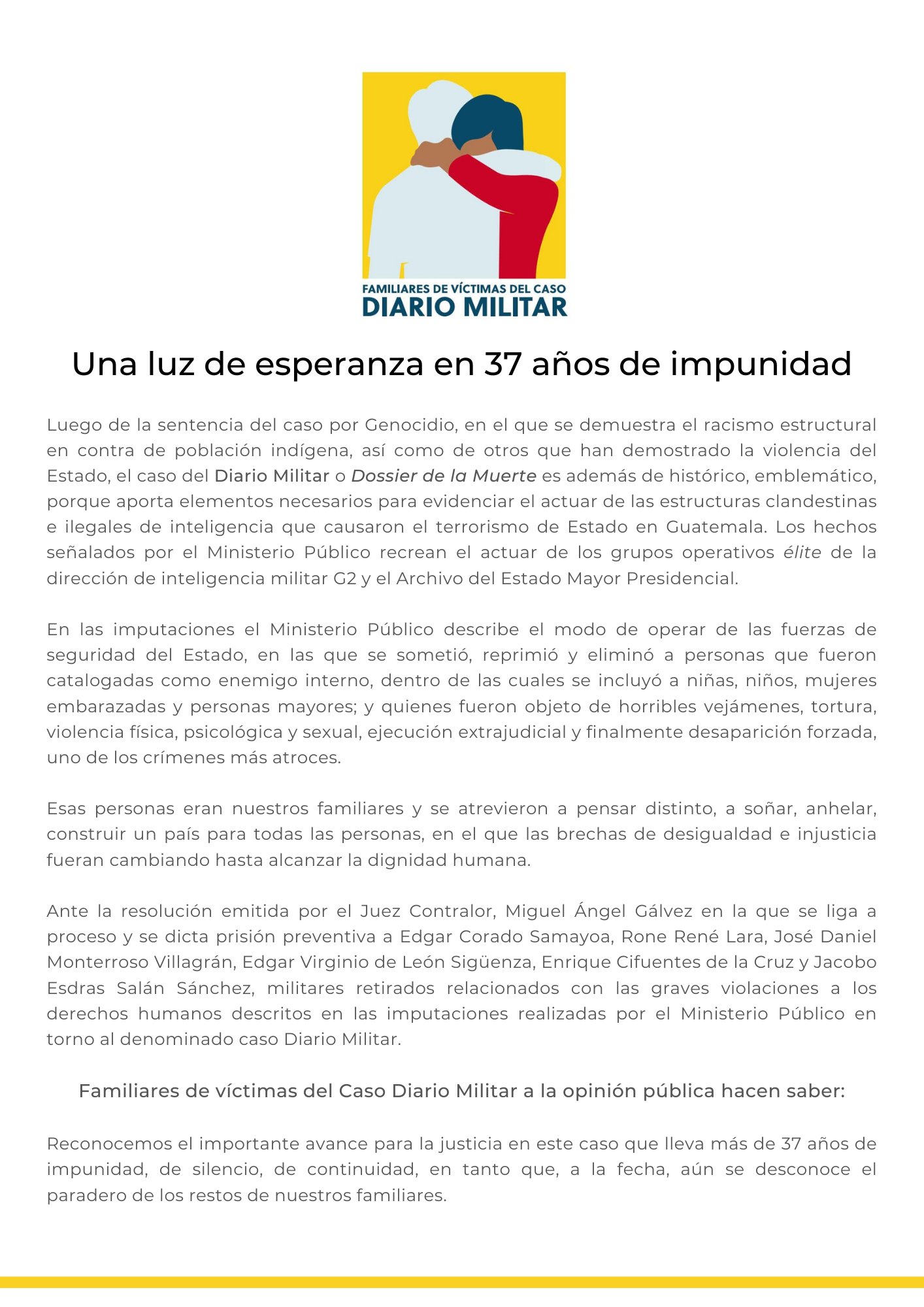 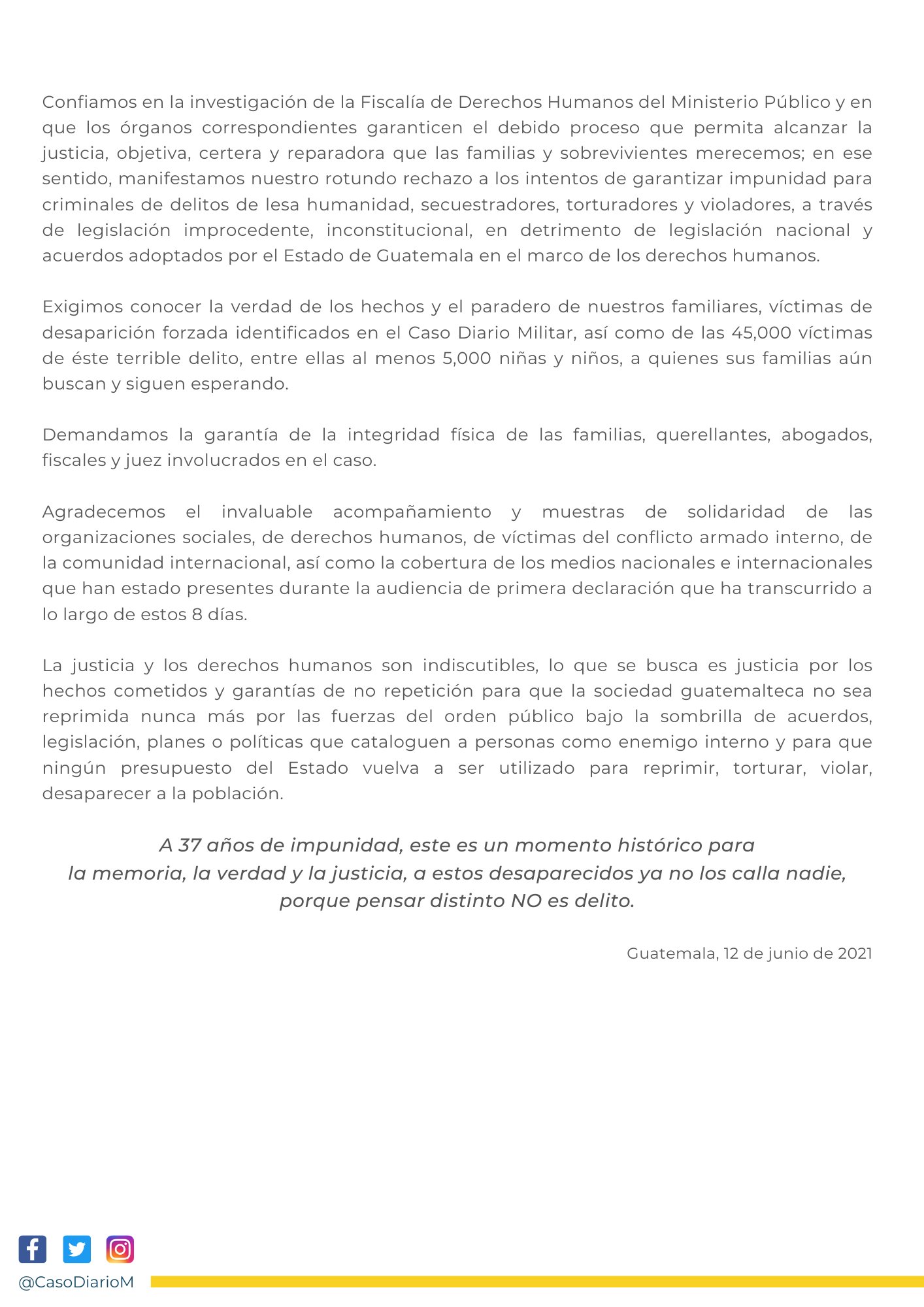