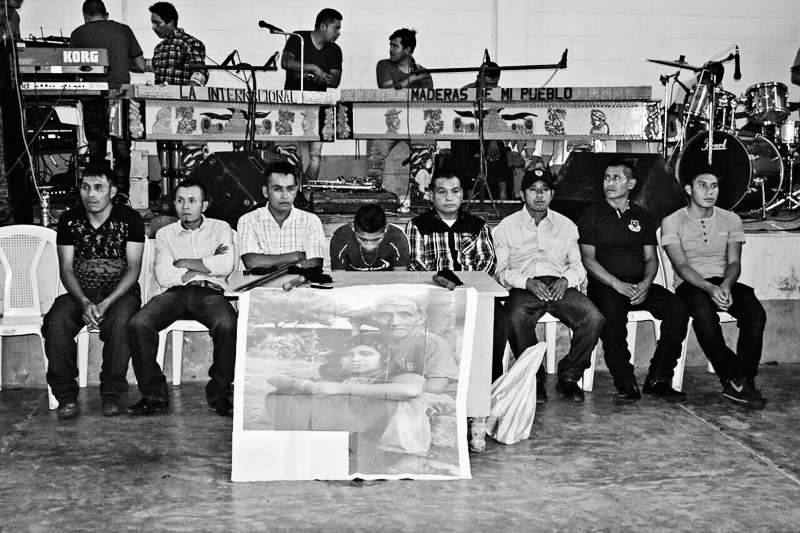 The communal authorities of Yulch’en Frontera paid tribute to the martyr and defender of rivers Don Sebastián Alonzo Juan, who was murdered on January 17, 2017 by private security forces for the company, Proyectos de Desarrollo Hídricos S.A. (PDHSA), [who attacked] a peaceful demonstration protesting the company’s construction of three hydroelectric dams.

In January 2017, communities held a peaceful demonstration in front of the PDHSA construction site. The company, recently renamed “Energía y Renovación”, holds ties to the Spanish transnational company Ecoener Hidralia Energía and seeks to impose the construction of three hydroelectric plants. To achieve this, they have criminalized anyone who opposes their violent form of operating which has caused serious social conflict in the northern department of Huehuetenango.

On January 1, 2018, the community of Yulch’en Frontera celebrated the new year with the transition of community authority. Prior to the start of the programmed activities, local authorities decided to pay tribute in memory of Don Sebastián Alonzo Juan. Those present during the tribute observed the act with tears in their eyes.

An investigation into and justice for the murder of Don Sebastián is one part of a large debt that the justice system – in particular the Public Prosecutor’s Office – owes to the Chuj People and those living in Yulch’en Frontera and in the region of Ixquisis.  The communities hold the company and their private security directly responsible for this criminal act, as well as state security forces that did nothing to prevent this armed attack, even though they are stationed out of a military base located on the company’s property, ten minutes from where the demonstrators were attacked.

NISGUA provides international human rights accompaniment to human rights and land defenders in the Ixquisis region through the ACOGUATE coalition. For more on the communities’ struggle to protect their land and resources from powerful corporate interests read the NISGUA blog. Also read the recent article from former NISGUA accompanier, Zia Kandler, on Upside Down World.