“We oppose any desecration of our sacred site.  Our sacred sites are not for sale.  We will not allow our ancestors to be disturbed.  This sacred site represents more than 5,000 years of our history and it also currently represents our living culture. We will not permit the desecration of a site that is sacred to our families, our culture, and our ancestors.” –Ohlone Family Bands statement on proposed project on sacred Ohlone site. (Full statement below.) 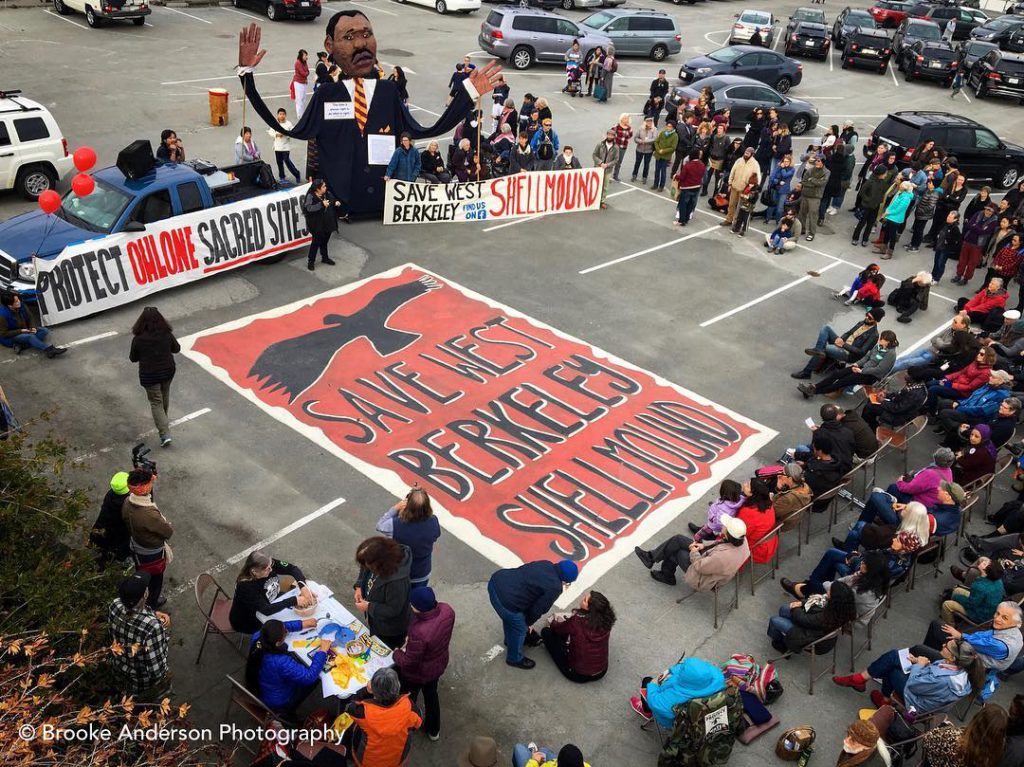 A 5,700-year-old Ohlone Shellmound and Village Sacred Site is threatened by a proposed development project in Berkeley, CA on the Ohlone territories where NISGUA’s U.S. office is based. When Ohlone leaders challenged a problematic Draft Environmental Impact Report (DEIR) last year, many of you made the connection to our work in Guatemala, where Environmental Impact Reports are often used to exclude indigenous and campesino communities from the dialogue of what happens on their lands. As a result, you sent dozens of letters and contributed to over 1,700 pages of public comment to the Berkeley Planning Commission on the DEIR. At NISGUA’s request our partners at the Center for International Environmental Law (CIEL) also submitted a formal comment on the DEIR, drawing upon their legal expertise and experience working in defense of indigenous rights; read their letter here.

One victory resulting from this community outcry was consultation with three bands of local Ohlone peoples previously left out of the process. They unanimously determined they would not accept any building on their sacred site nor would they engage in negotiations or concessions on one of the few remaining open air sacred sites in the region. Read their full statement below.

Ohlone leadership asks for ongoing support to protect this site, dated as older then the pyramids in Egypt, of ancestral and historic import to all peoples. “We call on people who live in our traditional territories, the Bay Area, to stand up with us and help us protect the West Berkeley Shellmound. We ask you to stand with the Ohlone people and to join us in our fight to preserve a sacred site that is more important than real estate and material wealth.” 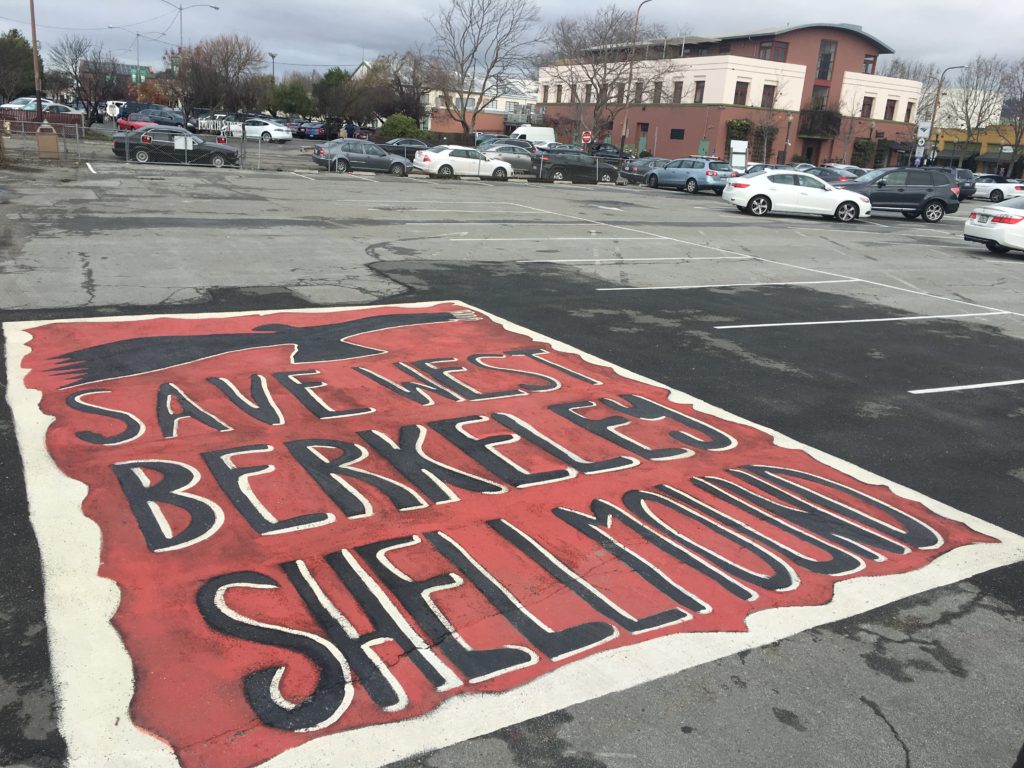 To make connections between global and local struggles, our 2018 Guatemala Accompaniment Project training visited the West Berkeley Shellmound site to honor this sacred place and explore the parallels between defense of life and territory movements in Guatemala and in the U.S. The visit was facilitated by Catalyst Project, an organizational friend to NISGUA whose anti-racism organizing includes solidarity with broad and local indigenous sovereignty movements. Here are resources Catalyst offers to non-native people committed to indigenous sovereignty. Support the fight to protect this sacred Ohlone site by visiting the West Berkeley Shellmound on Facebook. 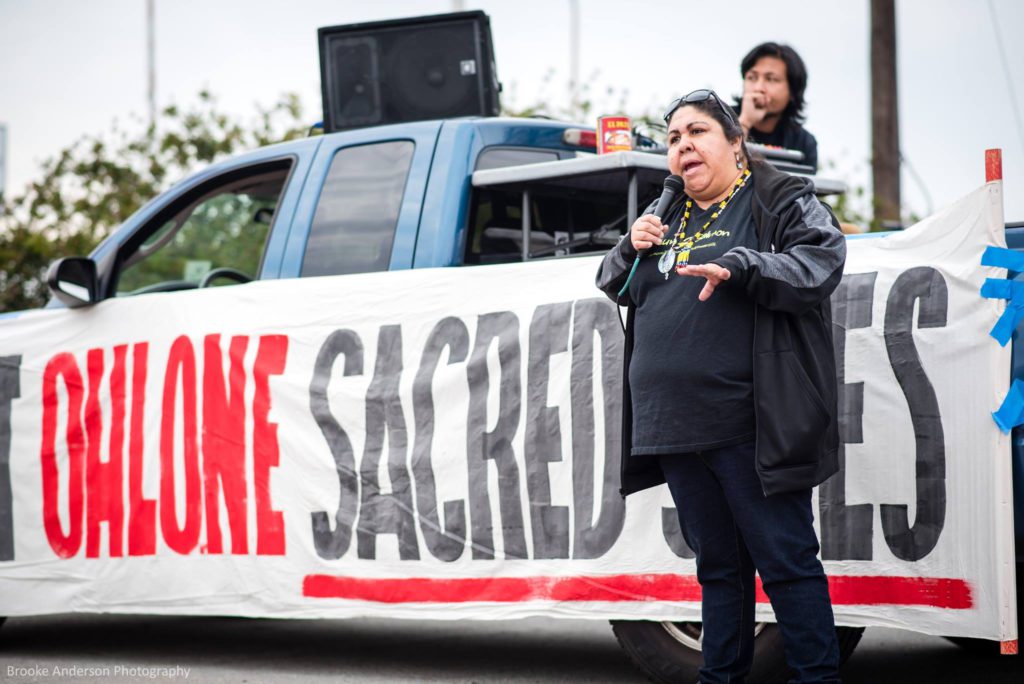 Three autonomous Ohlone Family Bands, The Confederated Villages of Lisjan, Himre-n-Ohlone, and Medina Family, representing the Ohlone People of the East Bay, unanimously stand together to oppose the development of the West Berkeley Shellmound located at 1900 4th Street in Berkeley. We unequivocally oppose any development that involves the desecration of our sacred site and the disturbance of our Ohlone ancestors. This includes our opposition to a “limited” or “alternative” development of the sacred site.

Ohlone people are traditionally organized politically, genealogically and socially into kinship groups or family clans.  These family clans often designate a headperson or representative to speak for their respective group or family.  The Confederated Villages of Lisjan are represented by Corrina Gould.  The Himre-n Ohlone are represented by elder Ruth Orta, and the Medina family’s concerns is being voiced by Vincent Medina Jr.  These headpersons and family representative do not speak as individual voices but they represent hundreds of Ohlone peoples.  These families used Indigenous protocol in this process and they collaborated and consulted with each other. They came to the unanimous decision to oppose the development of the sacred site. Furthermore, our collective opposition to the project was clearly communicated earlier through our respective public comment letters on the draft Environmental Impact Report (DEIR). These letters were sent to the City of Berkeley Planning Department earlier this year.

No other party, nor group of Ohlone people, has been in consultation with the three family clans mentioned here.  If any other families, or clans are in consultation with the developer, we want to unequivocally state that they are doing so without communication or the consent of the three aforementioned Ohlone clans. Any attempt by the developer to solicit an affirmative response from another group of Ohlone people without communication with the three aforementioned Ohlone family clans must be made public. If the developers are participating in this strategy, then they are continuing the “Divide and Conquer” strategy that has been historically deployed to coerce Indigenous peoples and to steal their lands. The “Divide and Conquer” strategy that often involves one individual accepting financial or other forms of monetary compensation has historically wrecked destruction on Indigenous families, communities and lands. It is a strategy that does not consider or further the wellbeing of the next seven generations of our Ohlone descendents.

We present this statement to unequivocally state that the three aforementioned Ohlone family clans oppose any development of the West Berkeley Shellmound at 1900 4th Street.  We oppose any desecration of our sacred site.  Our sacred sites are not for sale.  We will not allow our ancestors to be disturbed.  This sacred site represents more than 5,000 years of our history and it also currently represents our living culture. We will not permit the desecration of a site that is sacred to our families, our culture, and our ancestors.

Recently, we were asked to agree to something that we cannot consent to.  We are unable to give permission for the desecration of our sacred site that would traumatize the next seven generations of our Ohlone descendents.  What is a sufficient price to sell your family cemetery so someone else can develop it into condos?   What do we call selling out 5,000 years of your history, culture, and literally the graves of your ancestors?  What do we call the selling of our grandchildren’s future and all of their future generations?  The Shellmounds are not for sale.

The developers made several offers that in effect were an attempt to buy our consent. Their offers might have been valued at tens of millions of dollars. We want to thank them for inviting us to the table to be consulted because Indigenous voices are rarely heard in these conversations.  However, we want to let the developers know that they invited us to the table to sell something that is not ours to sell.

The West Berkeley Shellmound is the site of the oldest Ohlone village around the shores of San Francisco Bay. It has been archaeologically dated to be more than 5,700 years old.  This is the very first place along the Bay Shores that Ohlone people lived and made their home. This site is older than the pyramids in Egypt and it is older than Jerusalem.  However, this important sacred site is threatened by the proposed development of a five-story condominium and retail complex at 1900 4th Street. Currently this sacred site lies under the asphalt of Spenger’s Fish Restaurant’s two-acre parking lot. The site and surrounding area were given historic landmark status by the City of Berkeley in 2002, making the “West Berkeley Shellmound” eligible for the National Register of Historic Places.

Our sacred sites were never given up by our families—not legally, nor in theory.  They are not properties or parcel numbers that can be bought and sold.   We did not stand in opposition when you developed other parts of our land.  We do not get in the way when you put up apartment buildings or shopping malls.  But where we draw the line is when you propose to dig up and desecrate the most sacred places where our ancestors are buried.

We honor the example shown to us by our Lakota relatives in their historical struggles to protect their sacred sites. The U.S offered the Lakota several billion dollars as payment for their Black Hills, one of their most sacred sites. Although most of the Lakota live in abject poverty here in the U.S as a direct result of colonization, and this offer would have been a life changing event for thousands of tribal members, the Lakota have refused this offer to accept payment and sell their sacred sites. The sacred is not for sale. The Black Hills are not for sale.

The aforementioned bands of Ohlone do not own a single acre in all of their vast territory.  Their tribal members are not wealthy or affluent.  They have no political influence.  Many of their members are working class people and like many Bay Area residents they are struggling to stay afloat.  Many are being gentrified out of the lands where their ancestors have lived for more than 5,000 years.  Their wealth is of a different kind. It is cultural wealth.  But some things are not for sale.

The Ohlone people ask for the public’s support.  We call on people who live in our traditional territories, the Bay Area, to stand up with us and help us protect the West Berkeley Shellmound. We ask you to stand with the Ohlone people and to join us in our fight to preserve a sacred site that is more important than real estate and material wealth.

NISGUA is committed to active solidarity with indigenous peoples in Guatemala and globally. From our U.S. office based in Oakland, CA, we are also committed to taking local action alongside the Chochenyo Ohlone peoples upon whose lands we are guests.