Statement: For the right to peaceful protest and against government repression!

After the Guatemalan government heavily repressed on Saturday 21 a peaceful demonstration that had initially being call against the 2021 budget, human rights organizations and social movements are calling for the immediate resignation of the president and vice president, and some civil society groups are calling for a constitutional assembly.

We share the statement of several organizations below. For further context, please see our summary here.

For the right to peaceful protest and against government repression!

On November 21st, thousands of people throughout the country and capital city expressed their condemnation of the abuses committed by the government of Alejandro Giammattei and Republic’s Congress. Despite the protection guaranteed to protestors by the Human Rights Attorney (Procurador de los Derechos Humanos), the PNC launched tear gas in Guatemala City’s Plaza de la Constitución and in Quetzaltenango; this happen despite the fact that the PNC did not act when  a part of the Congress was burned down by a group that never reached the Plaza. The police then illegally and arbitrarily captured more than thirty people, assaulting and gravely injuring various people, including journalists. President Giammatei and the Minister of Governance, Gendry Reyes, are directly responsible for these dictatorial acts that are arbitrary, illegal, and against human rights.

As a result of this and other human rights abuses, we reiterate our demand that the government and his cabinet resigned immediately because of his criminal and incompetent actions and violations of human rights. 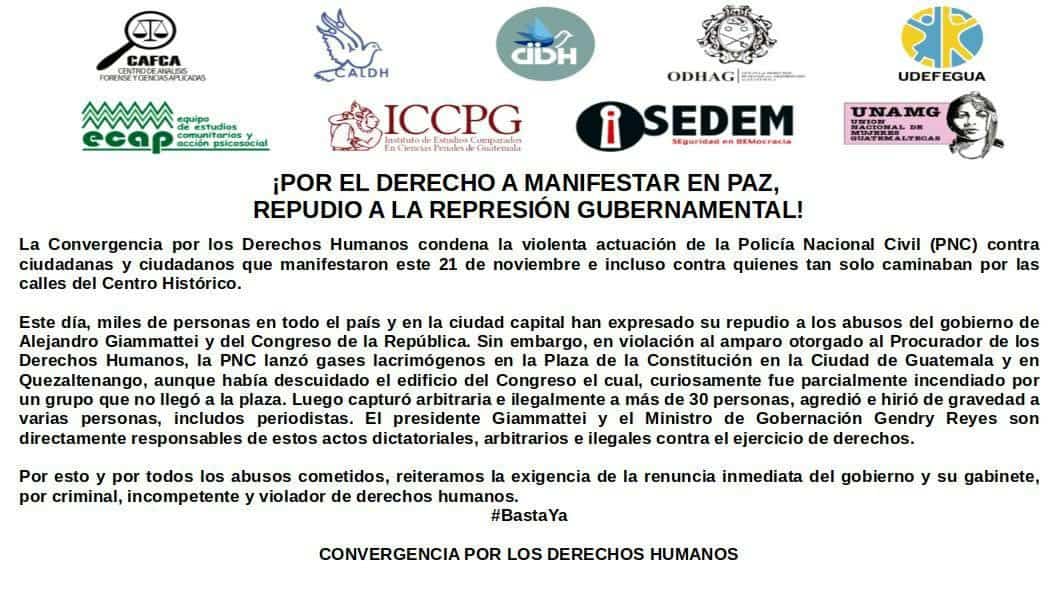