Statement: The Appointment of Roberto Molina as a Constitutional Court Judge is another action of the pact of the corrupts

On November 10, the Guatemala Supreme Court elected Roberto Molina Barreto to the Constitutional Court (CC), replacing Judge Bonerge Mejía, who died of COVID-19 in September. In 2013, when Molina Barreto was also serving on the CC, he voted to overturn Ríos Montt’s genocide conviction. Years later, in December  2018, he was a candidate for vice president, as a running mate to Ríos Montt’s daughter, with the Valor party.

So far, four injunctions have been presented by different Guatemalan organizations, including our partner CALDH, asking the Supreme court to repeat the process. We echo our partners’ concerns. Molina Barreto’s appointment, along with the recent dismantling of Guatemalan Peace institutions, indicate serious setbacks in transitional justice and human rights.

THE APPOINTMENT OF ROBERTO MOLINA BARRETO AS A

ANOTHER ACTION OF THE PACT OF THE CORRUPT

On November 10, 2020 the Supreme Court of Justice and the Guatemalan Congress once again demonstrated that they are an essential part of the “pact of the corrupt” by electing Roberto Molina Barreto as a judge on the Constitutional Court, the highest Court of the Guatemalan state. The position was vacant after Judge Bonerge Mejía passed away due to COVID-19. The election process was carried out with little transparency and almost no democratic participation. We are greatly concerned that Barreto assume this position because:

Molina Barreto formed part of the political party “Valor,” in  which he was the Vice Presidential candidate for Zury Ríos, who ultimately was denied participation in the 2019 presidential race because she is the daughter of  former dictator General Ríos Montt, who also participated in a State coup. This antecedent of the political career of the Judge displays that he is not suitable for the position to which he was elected, especially given the irregularities in the election. The Supreme Court of Justice did not take into consideration the faults that were presented against the candidate Molina Barreto.

When Molina Barreto was previously a part of the Constitutional Court, there was a regression in human rights matters; one notable  example is his position on the Ixil Genocide case. In 2013, the Court voted that the process be rolled back to its second phase, which meant that General Efrain Ríos Montt died before he faced justice for the crimes against humanity and genocide committed during his dictatorship in 1982.

In response to Molina Barreto’s election as Judge of the Constitutional Court, two appeals have been presented that focus on the opaque scheme at hand to have a pawn that could work in favor of the pro-corruption alliance. Guatemalans deserve to have officials in their courts that are suitable and respected people so that, when imparting Justice, they do so in accordance with the law and with deep respect for a dignified life for each and every Guatemalan.

We call on the Constitutional Court to process the appeals filed against the election of Molina Barreto as Judge and Jorge Rosales as a substitute. We ask that the Supreme Court of Justice hold a re-election for these Constitutional Court positions, an election that is not  rigged, murky and non-transparent in which a questionable character was placed in such a high position in the Guatemalan justice system. 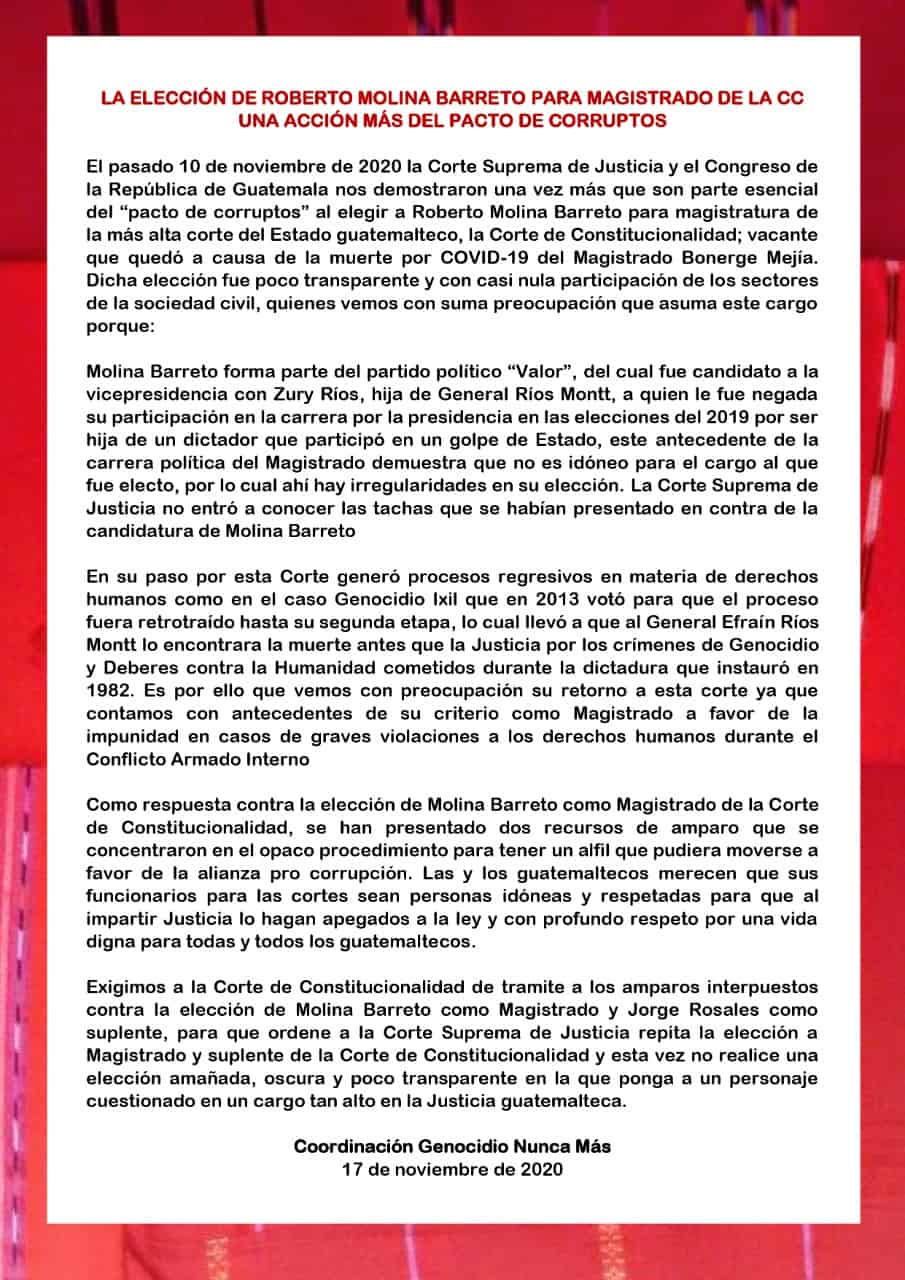