Press Release: We support the Association for Justice and Reconciliation (AJR)

On October 17, Judge Claudette Domínguez, known for her right-wing ties and regressive decisions, was removed from the Maya Ixil genocide case against Luis Enríquez Mendoza García, who was chief of military operations under Ríos Montt Government. The plaintiffs of the case successfully proved that Judge Dominguez has a record of bias and partiality and that her previous rulings have systematically benefited former military members.

While awaiting the final decision, Maya Ixil genocide survivors and other survivors of state terror and violence during the Internal Armed Conflict shared a press release supporting the recusal motion, shared in its entirety below:

We support the Association for Justice and Reconciliation (AJR)

We, victims’ organizations, and family members of victims and survivors of Guatemala State terrorism between 1960 to 1996, manifest our support for the Association for Justice and Reconciliation.

The so-called Pact of the Corrupt seeks to take us back to the politically dark decades through regressive laws. We denounce the hidden powers that aim to gain back control of the justice system, which has started to be impartial and bring legal security to the Guatemalan people who continue the struggle for the truth and justice that has been denied for decades.

Guatemalans have witnessed how the Pact of the Corrupt has launched a series of attacks against independent judges who preside over cases of serious human rights violations during the Internal Armed Conflict. These attacks come from retired military and public officials opposing a fairer Guatemala for all. Likewise, links between the Pact of the Corrupt and the ruling political system have come to light through the example of judges who benefit retired and active military personnel accused of human rights violations and acts of corruption.

The arrest of retired General Luis Enrique Mendoza Garcia, head of operations during José Efraín Ríos Montt’s dictatorship, was seen with hope as it opened one more chapter to achieve justice for the thousands of genocide victims in the Ixil region during 1982-1983.

A year ago, a High Risk Tribunal concluded that the Guatemalan Army COMMITTED genocide against the Maya Ixil people, validating the declarations of more than one hundred witnesses who narrated the atrocities and inhuman conditions to which they were subjected through the scorched earth policy. This policy was planned by the high military command and written down in military documents, proof of the brutal attacks against a people considered inferior.

We publicly declare our support for the AJR and their tireless struggle to judge the Guatemala High Military Command and their genocidal policies. Today, the AJR and survivors face a new challenge in a feeble justice system due to cowardly strategies of a small group insisting in blocking the judgements of past events and avoiding the construction of a peaceful society.

We consider that the struggle and persistence of the survivors and victims to know the truth and achieve justice is an example worthy of imitation for the Guatemalan people. It motivates us to continue working for a fairer Guatemala in which murder, forced disappearances, sexual violence, torture and forced displacement will NEVER AGAIN be used as a weapon of war against a civilian population.

We will continue seeking justice and telling the truth of what happened to more than 200,000 people murdered and 45,000 detained and disappeared, so that impunity may no longer reign.

We at NISGUA celebrate this win due to community and legal organizing. After the hearing we spoke with the AJR’s current vice-president who shared with us her reflections:

“Because Judge Claudette Dominguez benefited active and former military members in her rulings, we are satisfied that the motion to recuse Judge Dominguez from the Ixil genocide case was granted. We now want to ensure that the new judge performs her work in our case as indicated by law, that the new judge does not have links to the military under prosecution, that all witnesses be heard, and that all the suffering may not be in vain. We want justice in the name of all the witnesses, survivors and those slaughtered and killed during the Internal Armed Conflict.” 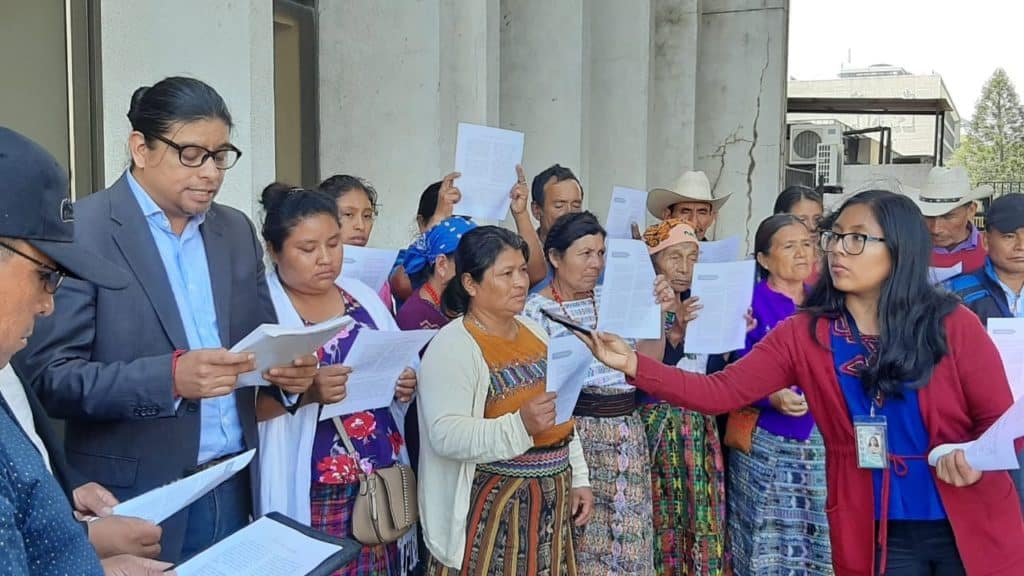 Victims of the Internal Armed Conflict in different regions of Guatemala support AJR’s demand that an impartial judge be appointed to hear the case against former General Luis Enrique Mendoza. Photo credit: AJR