In September, NISGUA had the honor of hosting a delegation to Guatemala for representative leaders of the Indigenous Environmental Network (IEN). The delegation featured talks with women land defenders, cultural exchanges, and a community visit to the Chixoy River watershed. There is also so much that cannot be captured in an article – the laughs, the moments of recognition, the gifts and words of appreciation whispered through tight hugs. We offer this delegation report-back because we believe that exchange between Indigenous land defenders makes the movement safer and better resourced, and because we know that there can be no movement without Indigenous women at the lead. 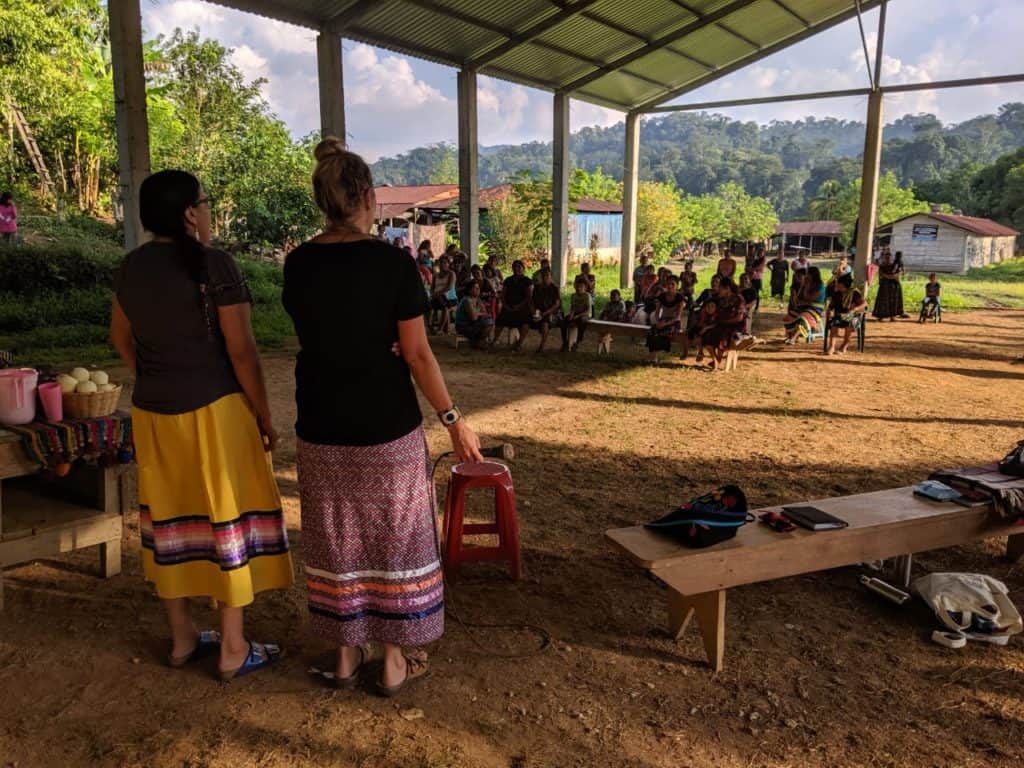 Simone and Bineshi share a song with the women of Copal AA at the end of the delegation’s time in the community.

In their own words, “IEN is an alliance of Indigenous peoples whose mission it is to protect the sacredness of Earth Mother from contamination and exploitation by strengthening, maintaining and respecting Indigenous teachings and natural laws.” Formed in 1990 to connect Indigenous communities resisting municipal and toxic waste dumps in their territories, IEN is Indigenous-led and run with a staff of nine. We welcomed IEN representatives Simone Senogles (Anishinaabe), IEN Food Sovereignty Program Coordinator, and Ozawa Bineshi Albert (Yuchi and Anishinaabe), IEN Movement Building Coordinator, on the delegation. We also welcomed Luz Guerra (Afro-Carribean/Taino), former NISGUA Executive Director and consultant to IEN. 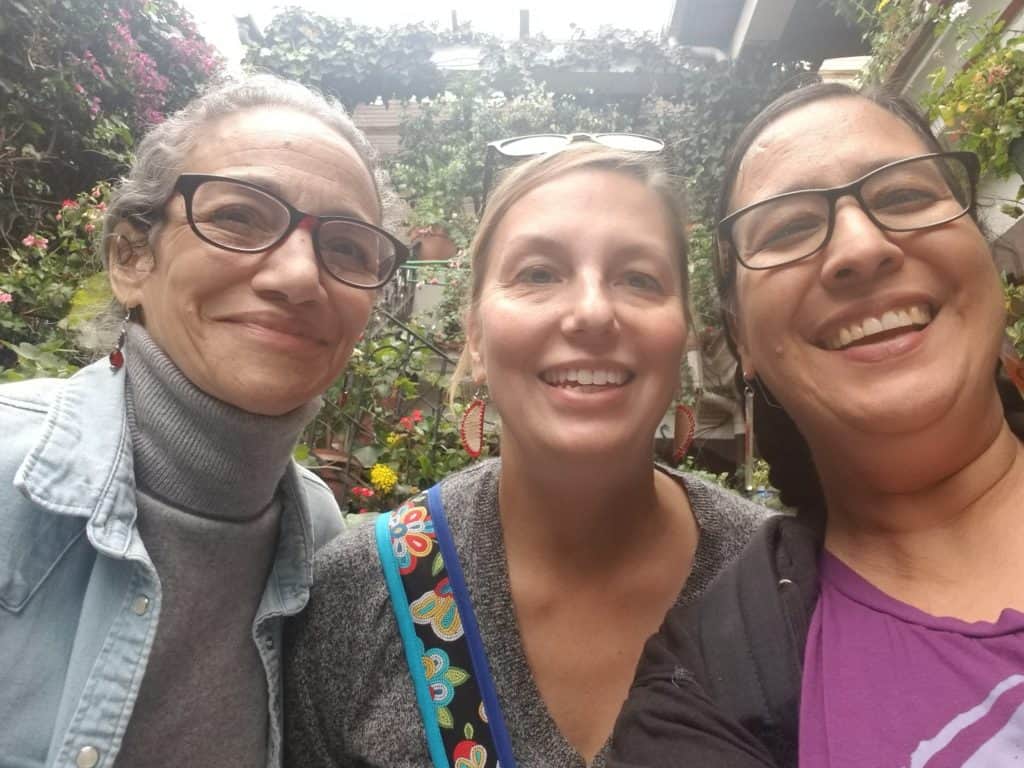 The exploratory trip to Guatemala was born out of IEN’s commitment to global grassroots environmental organizing, women’s leadership in the Indigenous environmental movement, and grassroots feminism aligned with Indigenous cosmovision. Their goal was to learn more about the Guatemala-specific context and to directly exchange with grassroots Indigenous organizations about shared struggles to defend life, culture, and Mother Earth. The discussions during the trip were grounded in Indigenous feminisms and the historical memory of colonization and genocide, and exchanges with groups working at the intersections of Indigenous sovereignty and defense of land. 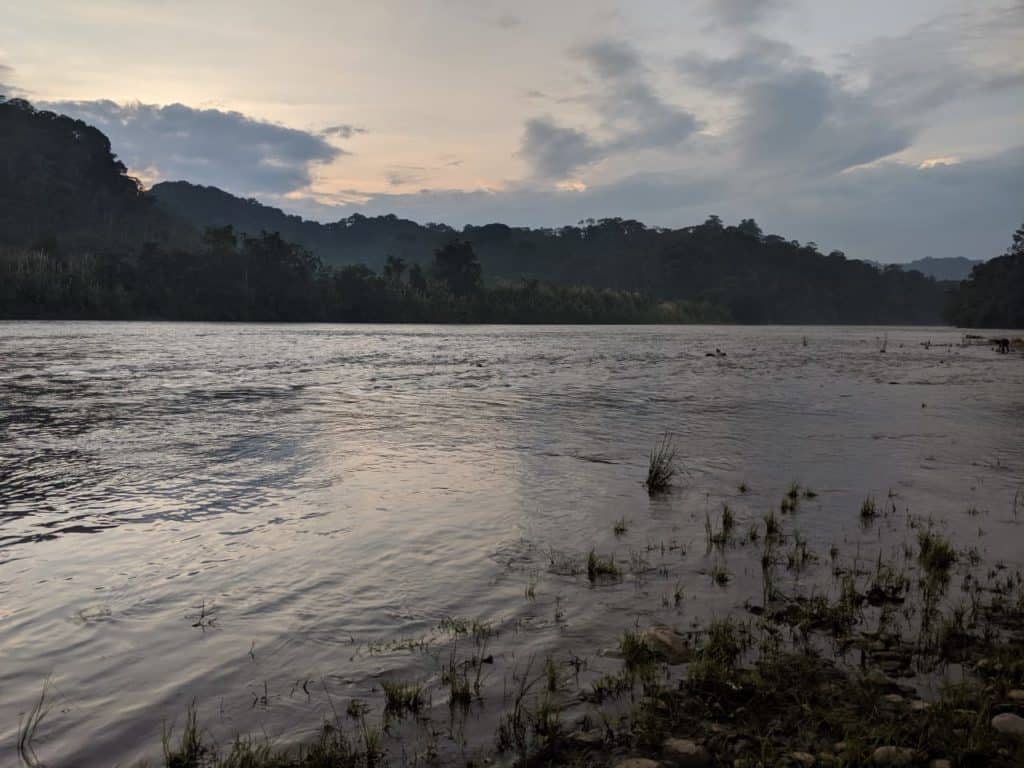 Along with meetings in Guatemala City and Sacatepéquez, the delegation visited the Chixoy River Watershed, seen here at sunset.

After a week of language school in Quetzaltenango and a NISGUA orientation, representatives attended their first meeting with Maudi Tzay, Maya Kaqchikel community psychologist and NISGUA’s 2017 tour speaker. Maudi provided a deep analysis on different schools of Maya feminisms, and the women shared perspectives on the legacy of 500 years of colonialism in Guatemala and in the North. The group discussed the many-layered ways that colonization continues to impact the lives of the Peoples of the Americas. They spoke of the contrast between the Indigenous cosmovisions that center balance of dualistic energies and the feminine and masculine are in balance, and the patriarchal, hierarchical, “top-down” worldview that drove the European invasion and still defines the imbalance in the world today.

Into the House of Memory with Ana Ceto

NISGUA delegations always attend tours at the House of Memory, a museum about colonization and genocide in Guatemala, offering regularly scheduled popular education tours staffed by youth docents. The House of Memory is a project by our long-time partners the Center for Human Rights Legal Action (CALDH). This time, the IEN representatives had the special gift of being accompanied not only by Maya Kakchiquel docent Rosario Jolón from CALDH’s unit dedicated to Indigenous women’s issues, but also by Maya Ixil community leader Ana Ceto. Ana Ceto, a young lawyer and community organizer, is a long-time comrade of other IEN representatives through her work with MUIXIL. 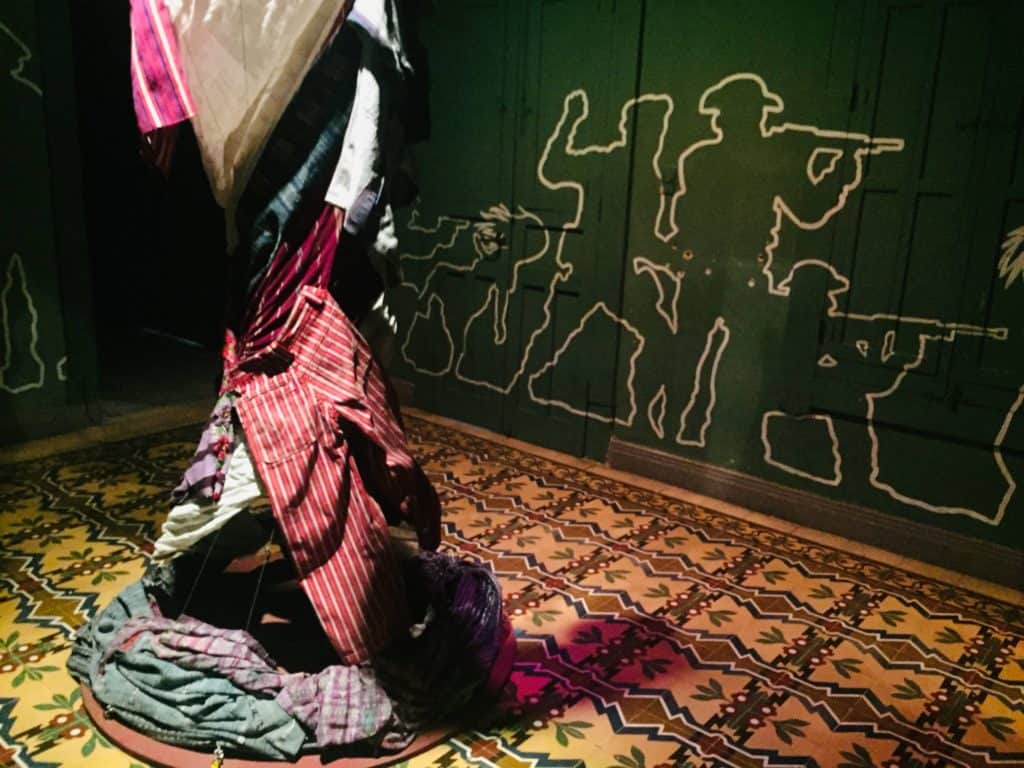 A memorial in the Casa de la Memoria honors those who were killed in the Internal Armed Conflict and the genocide in Guatemala.

Inside the House of Memory, the IEN representatives learned about 500 years of resistance from a Guatemalan Indigenous perspective, the U.S. government’s influence on the Internal Armed Conflict, and the struggle of genocide survivors for justice. IEN delegation members discussed how their communities had also been impacted by the systems of oppression that are analyzed in the House of Memory. While Indigenous people in the U.S. lived and live a similar history of genocide and forced removal, there is no such museum or community space that holds the collective memory of their resistance to colonization. Afterwards, the group and Ana discussed the connections between the massacres of the past and modern day natural resource extraction. 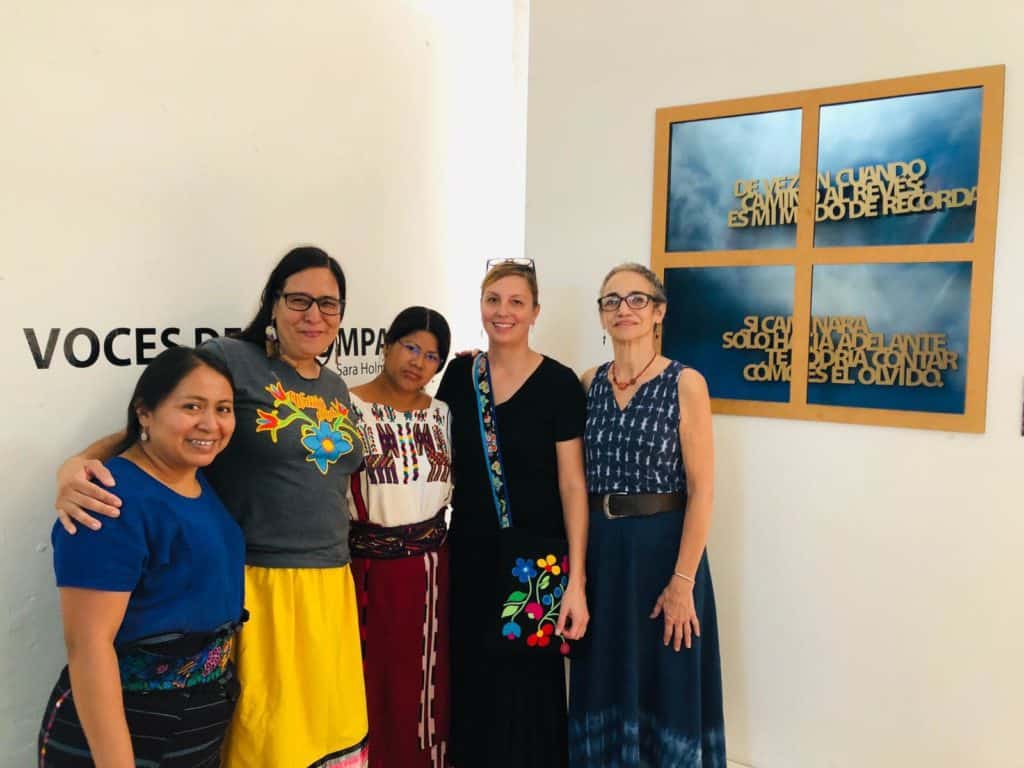 The representatives pose with Rosario and Ana in the House of Memory.

Impact of immigration on Indigenous communities with Association Pop No’j

The migration program of Association Pop No’j supports women and children from Huehuetenango, Guatemala, who have been deported from the U.S. We were lucky that given the current U.S. border crisis and the invisibilization of Indigenous issues in the U.S. migration debate, three Pop No’j employees—Ana Luisa Sales, Delia Catu, and Yesenia Casillas—could talk with IEN to highlight their Indigenous-centered work in immigration. The group discussed extractivist projects that push people from their homes, ancestral paths of migration, and the way that Indigenous communities within the U.S. are supporting their immigrant relatives.

As Ana Luisa said, “In the news they say that immigrants are murderers and thieves, that they leave their countries to make easy money. But that’s not true, people put their lives in danger to immigrate. In the news they never talk about the U.S. government’s violence against Indigenous Peoples, they never talk about how they steal their resources and force them from their territories just like our government does to us.” IEN shared their concerns about the U.S. policy of separating children from their parents at the border, and underlined that the U.S. government has implemented policies of family separation against Indigenous communities for centuries. 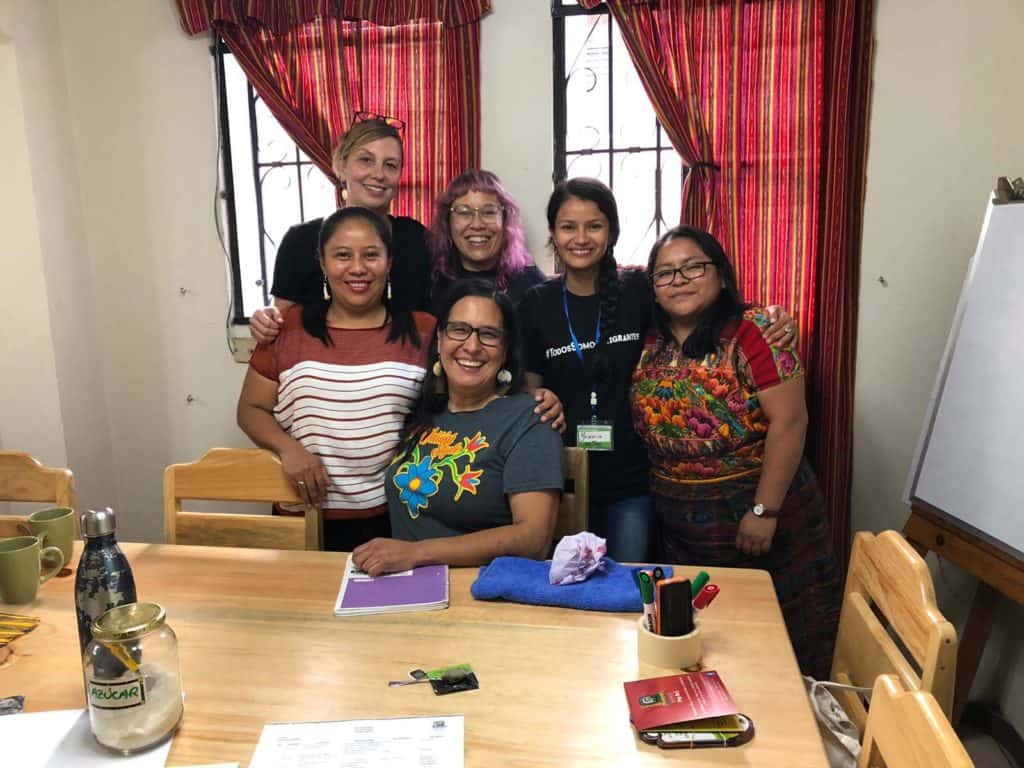 Simone, Bineshi, and Bridget (NISGUA staff) smile with Ana Luisa, Yessenia, and Delia after their conversation.

Right before a long trip to north-central Guatemala, the IEN representatives met with Elvida Abrosio, an organizer and board-member for the ADH in north-western Guatemala. Elvida told the group about the ADH’s efforts to stop draft municipal legislation to protect water rights and organize community members into promoting the legislation at the local level. She also shared about the state of siege, which was, at the time, limiting the rights of mostly Maya Q’eqchi’ communities over nearly 10% of Guatemala’s land mass. Since IEN’s conversation with Elvida, the state of siege has been extended to even more municipalities and prolonged another 30 days. The state of siege is yet another example of the Guatemalan state’s use of criminalization and militarization to quell social movements and dissent. 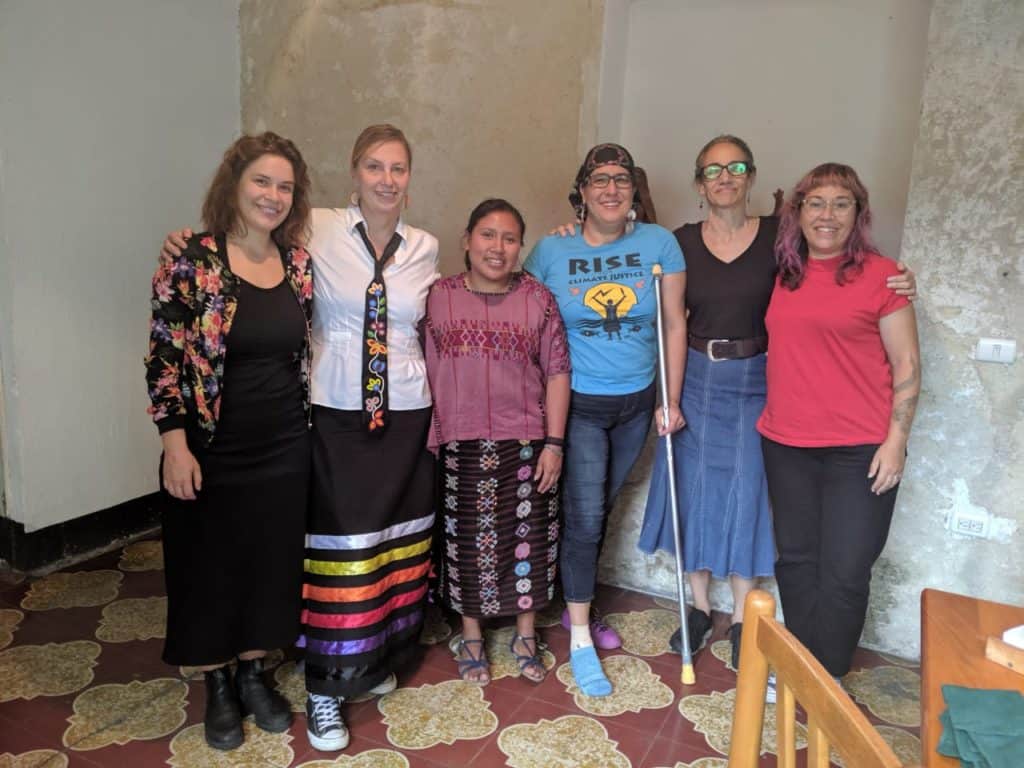 In Copal AA, a community of returned refugees and genocide survivors that is in resistance against the Xalalá Dam, the state of siege was of prime concern. Land defenders, community leaders, and women’s groups all expressed that the state of siege looks and feels like the level of state violence that preceded massacres in the 1980s. Our partners across the country have echoed what we heard in Copal AA, and many are concerned that the state will soon extend the state of siege across the entire country in order to push through extractivist projects. Of particular impact on the IEN delegation was the familiar story about loss of land and homelands, relocation and displacement. The delegation was inspired to learn about the way that Copal AA  is organized and built collectively despite sharing four distinct languages. 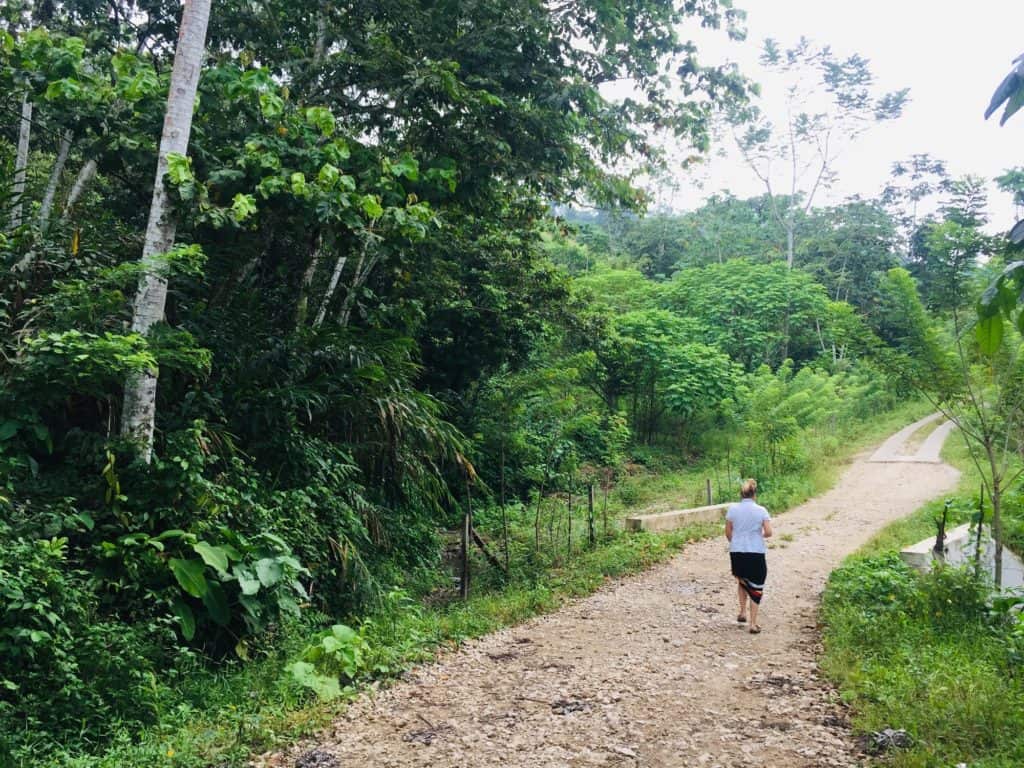 Simone walks down the road just outside of Copal AA.

Our two days in Copal AA were filled with warm welcomes, meetings, dips in the Chixoy River, and delicious meals with host families. In our meeting with the Association of Communities for Development and the Defense of Land and Natural Resources (ACODET), the group discussed how Indigenous peoples can organize across borders to expose the linked financing of extractivist projects in their territories, the importance of women in community organizing, and the use of community consultations in resisting mega-projects. The delegation’s unstructured time in Copal AA held sharing with families about food, cooking, gardens, the various uses and relationships with corn, crafts, clothes, home remedies and other general cultural exchanges as women.

Our final afternoon in Copal AA was spent in an exchange with local women, many of whom participate in Mamá Maquín, a national organization that struggles for the rights of women and the defense of life. Women shared stories of domestic sexism, displacement during the Internal Armed Conflict, fears about the Xalalá Dam, and analysis of current events. Many stressed the importance of exchanges between Indigenous women so as to stay well-informed and organized in the struggle. As one woman said, “Sexism is so prevalent here in our community, our country, our world. But the struggle to protect our life and territory will never succeed without women. We need to be well informed and well organized because we as women will always be on the front lines, we will always be who suffers the most.” 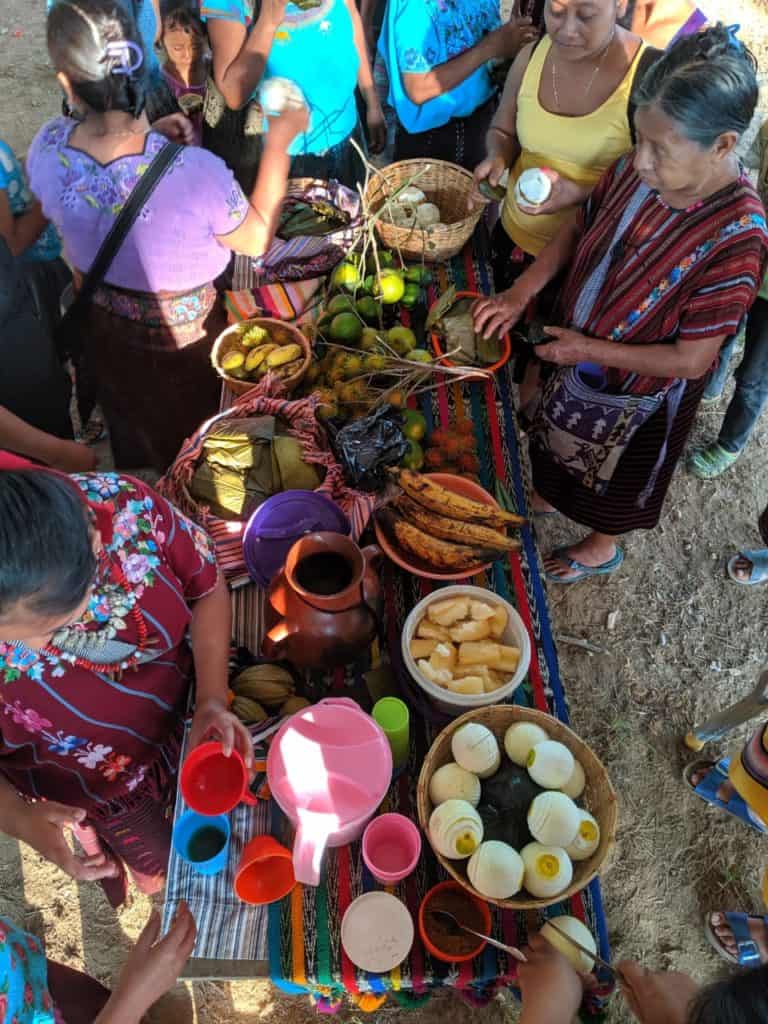 Following the exchange with the women of Copal AA, the women generously shared their fresh fruit and drinks with the delegation.

Closing out the IEN trip was a daylong exchange with AFEDES, the Women’s Association for the Development of Sacatepéquez. AFEDES presented their powerful model for transformation centered on the community and national struggle against the “folklore-ization” of Maya textile arts, the objectification of Maya women, and cultural appropriation by fashion designers of Europe and US.  They shared their efforts, implementation, evaluation and adjustment of the loan collective to support economic development and business of women. After the presentation, the IEN and AFEDES representatives shared about weaving, grass woven mats, beadwork, food preparation, pregnancy and birth practices,  and traditions and taboos. 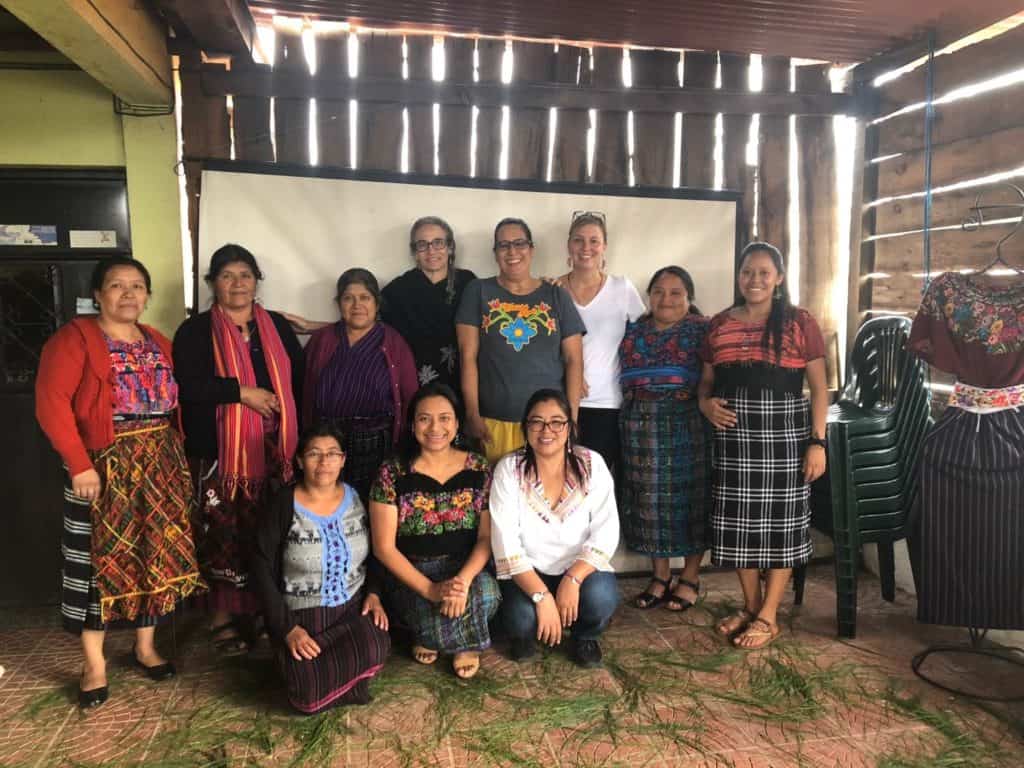 After nearly forty years of working in transnational solidarity, we at NISGUA are convinced of the importance of mutual exchange between similarly-impacted communities. From spiritual exchange to discussion of organizing tactics to affirmations between women survivors, we are moved by the power of Indigenous peoples talking together and seeing each other despite colonial states’ constant efforts to keep them apart and controlled. We also see the importance of creating more spaces for cultural exchange between Indigenous peoples given the ongoing genocides and cultural erasure of their traditions.

As Simone said, “Being in Guatemala was a life changing experience. Being in the same spaces with our sisters illuminated the similarities in struggle between indigenous nations of the North and South; as we rejected the false geo political borders between us.  Not only were our common struggles evident.  Our collective ability as indigenous peoples to survive and even thrive in the face of terrible racism, genocidal policies and practices, and colonization, shined through, as we shared meals, stories, laughter, tears, strategy and insights together. Sisters in struggle and in life.” 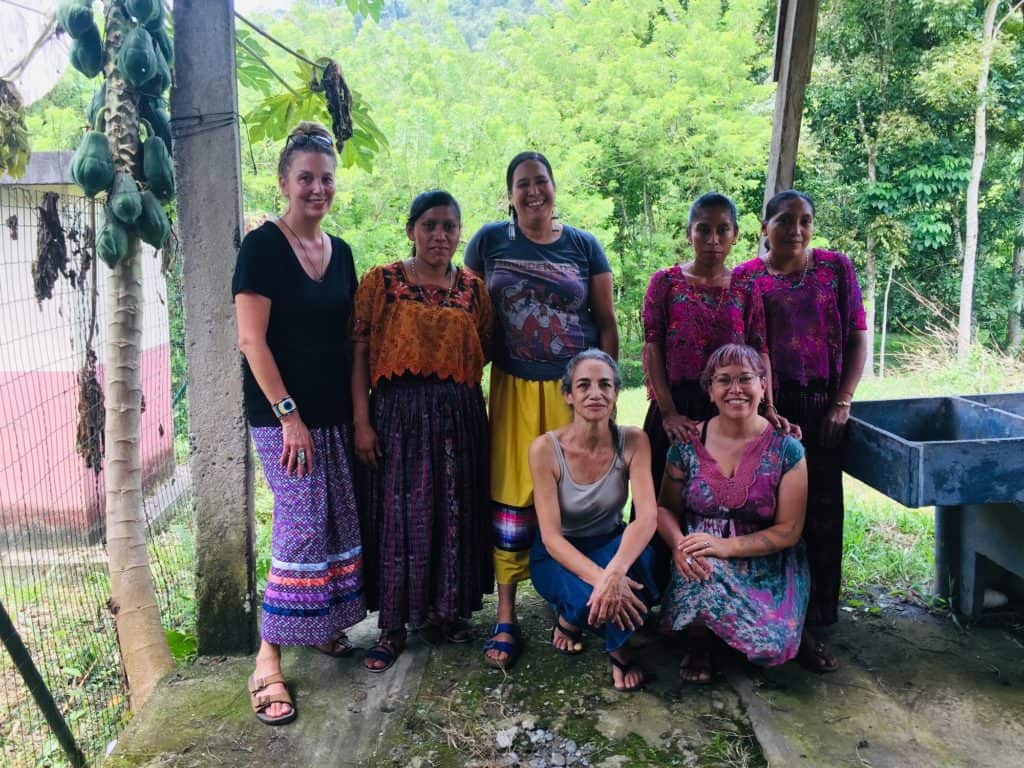 The delegation smiles with organizers from ACODET after their conversation about the struggle against the Xalalá Dam.