On October 2, the First High Risk Appellate Court announced their decision to maintain Judge Claudette Domínguez in the CREOMPAZ case, despite the plaintiffs’ lawyers’ arguments that Judge Domínguez may have direct or indirect interest in the outcome of the case. Domínguez’ sister is an active-duty military physician and Domínguez has systematically favored members of the Guatemalan military and other powerful figures in previous cases. Judge Domínguez has also been criticized for excluding nearly 80 percent of the victims identified in the original indictment and for excluding sexual violence from the charges against the accused in this case. Previously, on September 9, Judge Claudette Domínguez was removed from the Maya Achi sexual violence case. In this hearing, the court found that Judge Domínguez’s questioning of a survivor-witness was prejudicial and thus, evidence of bias.

Eight senior military officials, including Benedicto Lucas Garcia, who served as former Army Chief of Staff during his brother’s 1978-1982 military dictatorship, have been awaiting trial in the CREOMPAZ case since 2016. The CREOMPAZ case, like the majority of transitional justice cases in Guatemala, challenges the power of key figures and parallel state structures that have persisted in the post-conflict era and it is historic not only for the time span over which the crimes were committed (from 1981–1988), but also for the number of disappeared victims. So far, 565 human remains have been recovered in fourteen exhumations at CREOMPAZ, representing the largest known case of forced disappearance in Latin America.

We stand in  solidarity with the plaintiffs of this case, and we echo their voices demanding justice for crimes against humanity and forced disappearance.

On behalf of the surviving victims and plaintiffs in the CREOMPAZ case, along with supporting organizations, we declare our continuing dedication to the prompt resolution of this case and our confidence in the justice system of this country. In light of the decision by the First High Risk Appellate Court to not recuse you from the CREOMPAZ case, we reaffirm our concern with regards to your impartiality and ask that you act ethically and in accordance with the law.

We remind you that the CREOMPAZ case is emblematic as it involves serious human rights violations spanning a prolonged period (between 1978-1990) and on a particularly large scale. One such example is the 80 men from Pambach population who were extrajudicially captured on June 2, 1982, whose remains were found in one of the clandestine graves of CREOMPAZ. Another example of the extreme violence that this case addresses is a masacare in Río Negro on May 14, 1982, where members of the Guatemalan army and Civil Self-Defense Patrols (PACs) killed 80 civilians and took the surviving women and children to Military Zone no.21, known as CREOMPAZ, whose remains have also been located in another clandestine grave.  Although this case does not consider 80% of the instances of enforced disappearance connected with Military Zone no.21, you are still under an obligation to judge the acts of sexual violence where a ruling has not been provided.

That is why we demand justice in this landmark case that reflects the magnitude of the atrocities committed by the Guatemalan army against the civilian population, especially against the Maya people. Guatemala CANNOT be complicit in an impunity that not only affects the country but the whole of humanity as they are crimes against humanity. It is for this reason that the State must guarantee access to independent and impartial courts of justice, with effective judicial protection and therefore it is your responsibility, Judge Martha Claudette Domínguez Guerrero to enforce it.

THE CASE OF THE MILITARY ZONE NO.21– CREOMPAZ 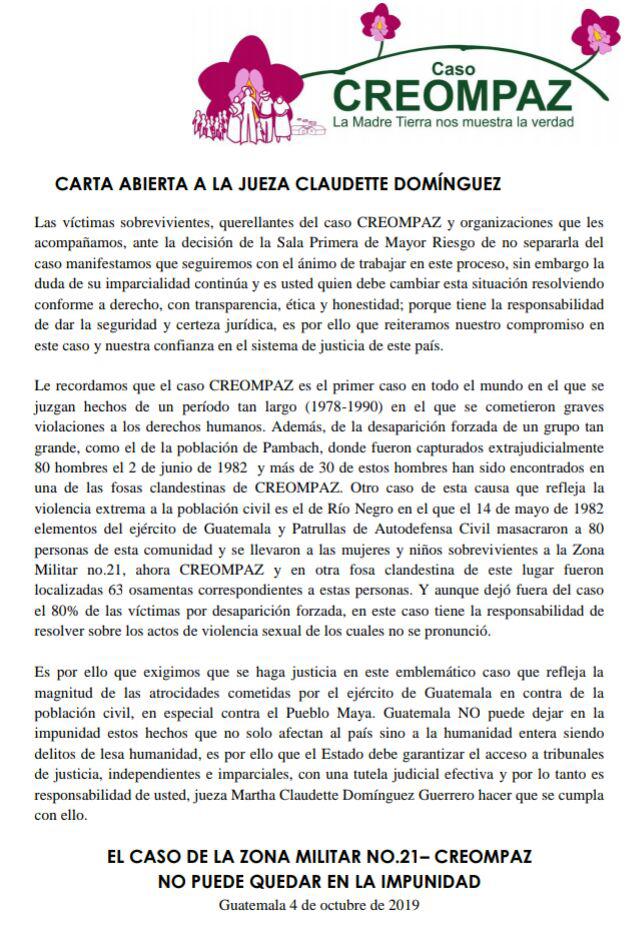