For nearly a year and a half, the Jimmy Morales administration has repeatedly defied the rule of law in its attacks on the UN-backed International Commission Against Impunity in Guatemala (CICIG).The situation reached another climax when CICIG researcher, Yilen Osorio, was detained and denied entry to the country at the Guatemala City airport. On Monday, January 7, 2019, President Morales announced that he would unilaterally cancel the agreement with CICIG, a move that amounts to a technical coup for its defiance of Constitutional Court orders guaranteeing CICIG and its employees’ continued presence. 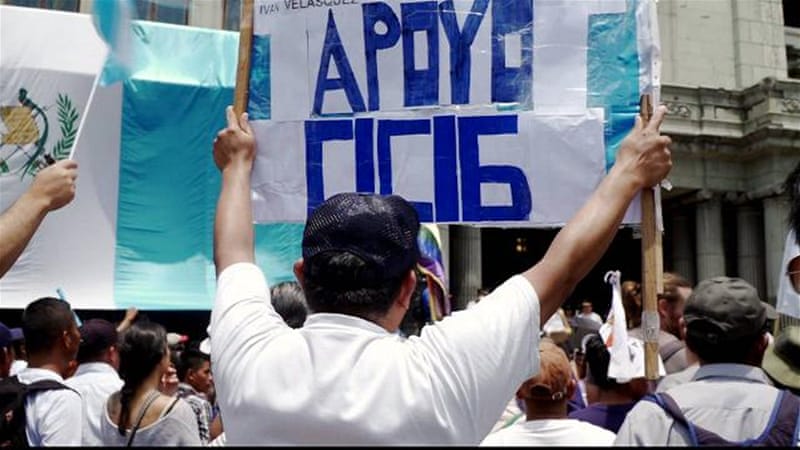 A protestor holds a sign at a pro-CICIG rally that says “Apoyo CICIG,” or, “I support CICIG.” Photo credit: Al Jazeera

In September, NISGUA published a timeline of the crisis when Morales announced that he would not renew the CICIG’s mandate and tried to bar the commission’s head, Ivan Velásquez, from entering the country. Just as they did in September, Guatemalan civil society is now taking to the streets to denounce the corruption and impunity of the Morales administration and the Guatemalan system as a whole.

Morales’ technical coup has its roots in decades of US-supported violations of human rights and rule of law. These recent developments have serious implications for the safety of land defenders and survivors seeking justice for crimes of the past. “All of the intellectual authors of the genocide who had powerful positions during the genocide are quite content right now because they benefit from a weak state. We fear that the situation could return to how it was in the 80s with kidnappings and disappearances. If they take control of the judicial system they will criminalize anybody,” explains Edwin Canil, president of the Association for Justice and Reconciliation, an organization of genocide survivors. Víctor Tzuy Caal, general coordinator of ACODET, echoes Canil’s opinion: “The current situation affects our safety as environmental defenders because although we might want to report some kind of violence we know that the system only functions for the corrupt and powerful; there is no path to justice for us.”

Activists draw connections between the impunity of the past and that of today; furthermore, they note that it is this same corruption that has allowed the government to sell ancestral lands to business interests who seek to impose megaprojects against community will. With long experience standing firm in the face of corruption and impunity, activists remain committed to organizing to stop the Morales government’s attack on democratic institutions.

A timeline of the political crisis since September 2018

For past events and historical roots, see our previous timeline of the crisis.

In 2018, nearly 30 human rights defenders were assassinated in Guatemala. This number includes land defenders, water protectors, journalists, and women’s rights activists. Recently, two members of NISGUA’s partner organization, the Peaceful Resistance of Ixquisis, were murdered. The lack of justice for these assassinations are further examples of impunity in Guatemala. These crimes demonstrate how impunity is most violently manifested against Indigenous and campesino communities defending their rights.

December 3, 2018: Ivan Velásquez says he will return to Guatemala

In an interview with El Tiempo, Ivan Velásquez, the head of CICIG, says that he will return to Guatemala, despite threats against his immigration status by Jimmy Morales’ administration. He says that he hopes to return in January.

On presidential orders, immigration agents arrive at CICIG headquarters to inform 11 investigators that they will lose their visas and diplomatic clearances. The agents announce that the affected employees have 72 hours to leave the country. On December 22 the Constitutional Court orders the Foreign Ministry to extend the visas for the CICIG employees and three of their family members.

The State’s Attorney’s Office, known as the PGN in Spanish, presents a pre-trial request to begin the process of removing the judicial immunity of three Constitutional Court judges. The three judges, Gloria Porras, Bonerge Amílcar Mejía Orellana, and José Francisco de Mata Vela, ruled against Morales on cases related to the CICIG. The PGN accuses these judges of violating the Constitution, prevarication, and abuse of authority. Many see the attack on the nation’s highest court as another step in a slow-motion coup.

Immigration officers detain Yilen Osorio, a CICIG investigator, when he returns to Guatemala in Aurora National Airport. Osorio refuses orders by immigration officials to board a plane leaving the country. The National Civil Police (PNC) blocks representatives of the Public Prosecutor’s Office (MP) from entering the airport. A criminal justice judge with the power to free Osorio, Elio Akbal Oliva Melgar, enters the airport and orders that Osorio not be deported but does not liberate him, instead asking that he be given a mattress. Peaceful protestors begin to gather in the airport and the Central Park in Guatemala City. 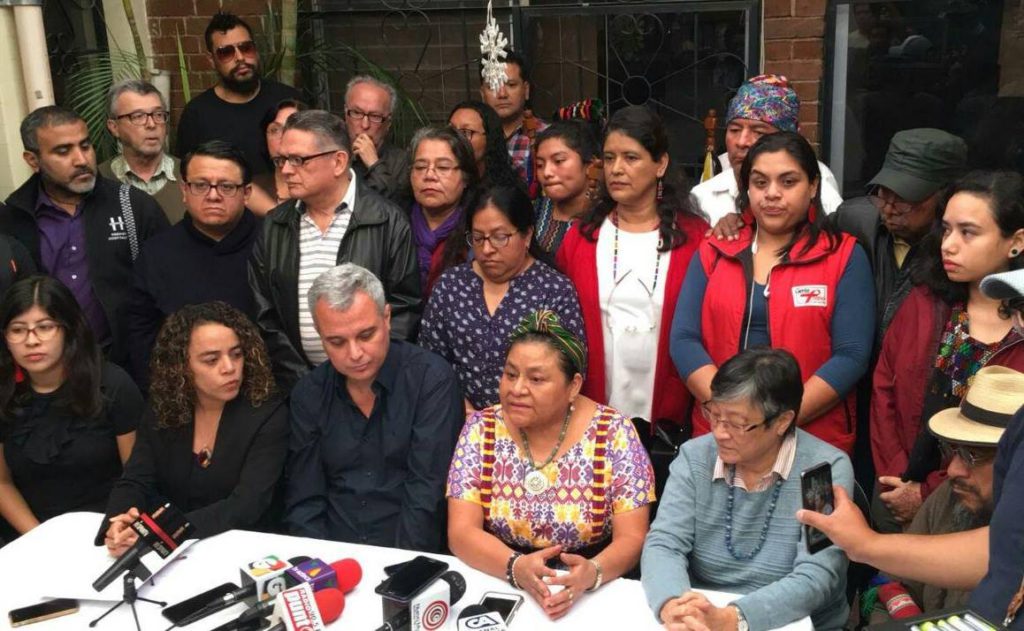 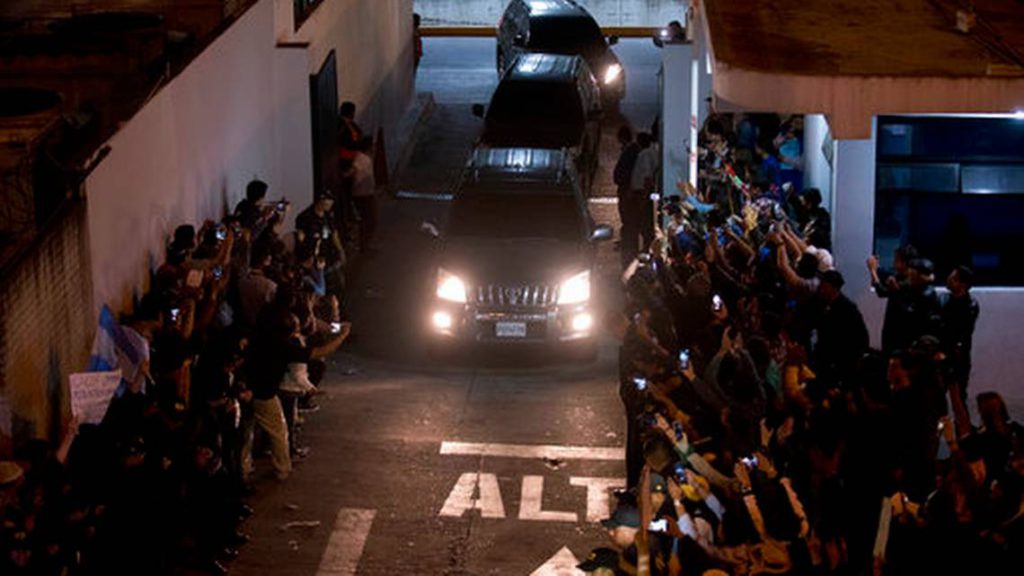 January 7, 2019: Withdrawal from agreement with CICIG

On Twitter, congressperson and ex-special forces officer Estuardo Galdámez announces that 80 congresspeople would support ending the agreement with CICIG. After a meeting with UN Secretary General Antonio Guterres, Guatemala’s Foreign Minister Sandra Jovel announces that Jimmy Morales is unilaterally cancelling the agreement with CICIG. Peaceful protestors continue to gather in the Central Park and many in Guatemala City observe an increased police presence in the streets.

Shortly thereafter, President Morales hosts his own press conference confirming the unilateral cancellation of the CICIG agreement. The conference features a video of Mississippi Senator Roger Wicker criticizing the CICIG. It also featured speeches by politically and economically powerful families, many convicted of or under investigation for serious crimes, including fraud, torture, and murder. Each claimed to be a victim of the CICIG.

Late in the evening news breaks that CICIG employees have left Guatemala given the government’s refusal to guarantee their security. The US Embassy in Guatemala publishes a tepid press release decrying corruption, without mentioning explicit support for the CICIG or the Constitutional Court. The CICIG remains clear that it will continue working from outside of Guatemala.

After all-night deliberations, the Constitutional Court blocks Morales’ unilateral cancelation of the agreement with CICIG and the expulsion of CICIG employees.

The Supreme Court of Justice accepts the the State Attorney’s Office’s request to open processes to remove judicial immunity from three Constitutional Court judges who have repeatedly ruled that Jimmy Morales is violating the law with his attacks on CICIG. The decision now moves to Congress, where it needs 105 votes to completely remove the judge’s immunity, opening them up for a politically-motivated criminal investigation. The decision will go to an Investigative Commission, which will be named by the Congress’ leadership board. This board is made up of many of the most powerful, right-wing, and allegedly corrupt individuals in the country, all of whom participated in the infamous Pact of the Corrupt. The commission will present their findings to the full Congress, who could vote against the judges in a bid to remove one of the last remaining wings of government attempting to fight impunity and corruption.

The Constitutional Court rules in favor of an injunction placed against the Supreme Court of Justice’s decision to accept a request to open processes to remove judicial immunity from three Constitutional Court judges. The ruling is unanimous but leaves many questions on how the situation will progress.

In the weeks following massive anti-corruption demonstrations convoked by artist, campesino, and Indigenous groups, there is a pattern of intimidation against leftist groups. On the night of February 3, police arrive at several well-known leftist social spots in Guatemala City. At Casa Celeste, they abuse and arbitrarily arrest several artists. The next day, Sandra Moran and Leocadio Juracán, two prominent congresspeople from the leftist political party Convergencia, announce break-ins in their Guatemala City offices.

On February 4, over 100 soldiers arrived with militarized vehicles in San Mateo Ixtatán, near where the Peaceful Resistance of Ixquisis resists the hydroelectric dams San Andrés, Pojom I, and Pojom II. The arrival of the army in a community of genocide survivors like those who live in San Mateo Ixtatán is a violation of the 1996 Peace Accords.