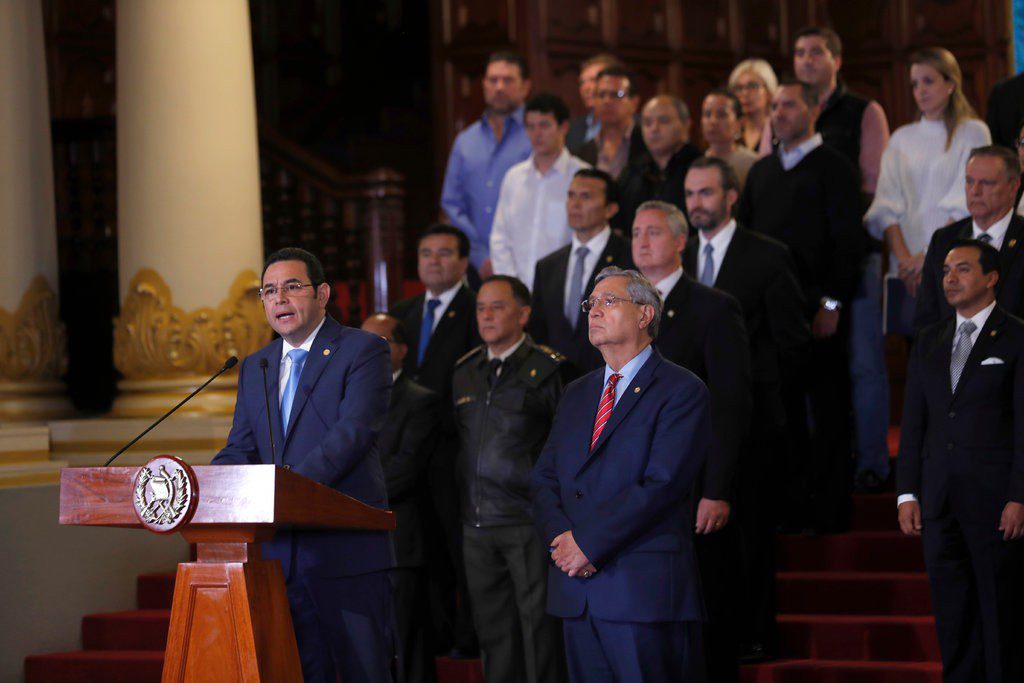 The Jimmy Morales administration has brought Guatemala to a technical coup, as it ramps up its attack against the International Commission Against Impunity in Guatemala (CICIG), in an effort to circumvent corruption investigations. In the midst of this political crisis, human rights and solidarity organizations sent a joint letter of concern to the U.S. Embassy in Guatemala and the U.S. Department of State. The 15 organizations called on the U.S. government to explicitly support the CICIG and demand that the administration respect Constitutional Court decisions.

Re: Concern regarding the escalating constitutional crisis in Guatemala

We, the undersigned organizations, write to express our deep concern at the escalating constitutional crisis in Guatemala, set in motion by the Morales administration’s repeated attacks on the CICIG. We have been monitoring the situation closely and share the concerns of Guatemalan human rights organizations and Maya, Xinka, and Garifuna Ancestral Authorities, who fear that the Guatemalan state is reverting back to the repressive tactics and dictatorial rule of the country’s 36-year Internal Armed Conflict. These fears are particularly relevant in the context of nearly 30 assassinations of human rights defenders in 2018. In the past several months, the Morales administration has defied the rule of law, ignoring checks and balances established in the Guatemalan Constitution to prevent the consolidation of power, in total violation of the 1996 Peace Accords and democratic institutionality.

Guatemalan President Jimmy Morales announced in August 2018 that his government would not renew the mandate of the UN-sponsored International Commission Against Impunity in Guatemala (CICIG). The CICIG, an entity funded by the international community, including the United States government, has investigated and prosecuted more than 600 individuals involved in corruption in Guatemala. Among these 600 is President Jimmy Morales himself, as well as his son and his brother. In efforts to bridle further investigations into government corruption, the executive has repeatedly violated Guatemalan law and decisions by the Constitutional Court. The government is also acting in contravention of the agreement between the United Nations and the Government of Guatemala, valid until September 2019.

On January 5, 2019, CICIG investigator and Colombian national Yilen Osorio Zuluaga was prevented from entering Guatemala and detained illegally at the La Aurora airport in Guatemala City. Human rights groups, civil society, and Indigenous authorities gathered outside the airport to demand his release and express support for the CICIG. After 25 hours of illegal detention, Mr. Osorio was released the following evening pursuant to a Constitutional Court order addressed directly to Guatemalan Immigration authorities. On January 7, the Guatemalan Foreign Minister, Sandra Jovel announced at the United Nations headquarters that Guatemala was unilaterally ending the CICIG’s mandate, effective within 24 hours. In her statement, she denied the legitimacy of Constitutional Court rulings. Immediately after, President Jimmy Morales held a press conference in which he affirmed the cancelation of the mandate, in violation of Guatemalan law.

We fear that the executive branch’s ongoing refusal to abide by the orders of the country’s highest court constitutes a “technical” coup, and seizure of the Guatemala state. The administration’s actions are especially concerning in an election year, as a manufactured crisis could affect the electoral process. The concern is compounded by the repeated actions of the Guatemalan Congress, more than 20 percent of whom are under investigation themselves, to undermine anti-corruption efforts through legislation known as “the pact of the corrupt.” We understand the government’s actions as far more than a simple attempt to remove CICIG from the country; its efforts to consolidate power constitute an attack against the rule of law and democratic institutionality.

Guatemalan civil society, human rights organizations, and Indigenous authorities have repeatedly called on the international community to continue its support for the CICIG and the judges of the Constitutional Court in Guatemala. They have also demanded further investigations of corrupt government officials and companies.

These organizations have drawn a clear link between ongoing corruption and impunity in the Guatemalan government and the impoverishment of the Guatemalan people. More than 59 percent of the population lives below the poverty line, robbed of opportunity by corrupt oligarchs and politicians who have shown themselves willing to destroy constitutional order to protect themselves from investigation. Indigenous authorities also named that government corruption has meant that the Guatemalan government has sold off ancestral lands to national and international business interests, despite opposition from local communities and clear legal violations, resulting in displacement and violence against community leaders. Extreme poverty, displacement, and violence are major driving factors of immigration to the United States, purportedly an issue of serious concern for the United States government.

Despite calls for respect of democratic institutions, threats against the rule of law have reached a critical point in Guatemala. In the face of the Guatemalan government’s blatant defense of corruption, which fuels migration and constitutes a direct attack against a US-funded anti-corruption body, it is crucial that the United States take a strong stand for human rights, rule of law, and an end to corruption and impunity in Guatemala.

We look forward to a public response and hope the U.S. Embassy will use all channels available to advocate for the Guatemalan government to respect the Constitutional Court and emphasize ongoing support for CICIG.