It brings me a lot of joy to be writing y’all again this fine Leo season! These past few months have been full of chaotic energy and change for me, both in beautiful and challenging ways. When things feel a bit too overwhelming, I step onto my porch and look at our little herb and flower garden, growing day by day, and that helps me find grounding.

Pictures of our herb garden. Left to right: a sunflower, my work from home setup, a marigold.

This letter is about the connections between state violence and peoples’ luchas in Palestine and Guatemala. I want to give y’all a content warning for mentions of genocide, ethinc cleansing, and forced disappearance. If you continue reading, do what you need to take care of yourselves. <3

Recently, I joined a study group that is coordinated and facilitated by the K’é Infoshop and the Red Ant Collective. This study group focuses on the Palestinian struggle and how it connects to global struggles against imperialism, settler-colonialism, racism, anti-semitism, sexism, and more. The further along we get in our curriculum, the clearer it becomes how the Palestinian struggle for liberation is interconnected with the luchas of the folks we accompany in Guatemala for transitional justice, the reclamation of historical memory, and against megaprojects.

Before I go any further, let’s define some terms/concepts that I’ll be using.

Imperialism: “the unrelenting process of competition and conflict between the world’s capitalist classes of different states, who are vying for domination and exploitation of the globe’s people, wealth, and resources” (Palestine: A Socialist Introduction, 15).

Zionism: a “political ideology at the root of Israel’s settler-colonial project” (Palestine: A Socialist Introduction, 17).

Settler colonialism: a “‘structure, not an event’ [that] operates through a ‘logic of elimination’ that seeks to erase indigenous presence on a specific territory. . . Settler colonialism ‘destroys in order to replace.’ The invasion of indigenous land seeks to permanently erase the indigenous presence on the land, in order to replace it with the new settler society” (“Sexual Violence, Women’s Bodies, and Israeli Settler Colonialism”).

Israel is a settler-colonial, imperialist State that was founded through the occupation and ethnic cleansing of the Palestinian people during the Nakba. The Nakba began in 1948 when militant settler groups conducted raides, massacres, and depopulation campaigns across Palestine under orders from Zionist leadership. Israel has systematically tried to erase the memory of the Nakba ever since through censorship of textbooks and the criminalization of commemorations. 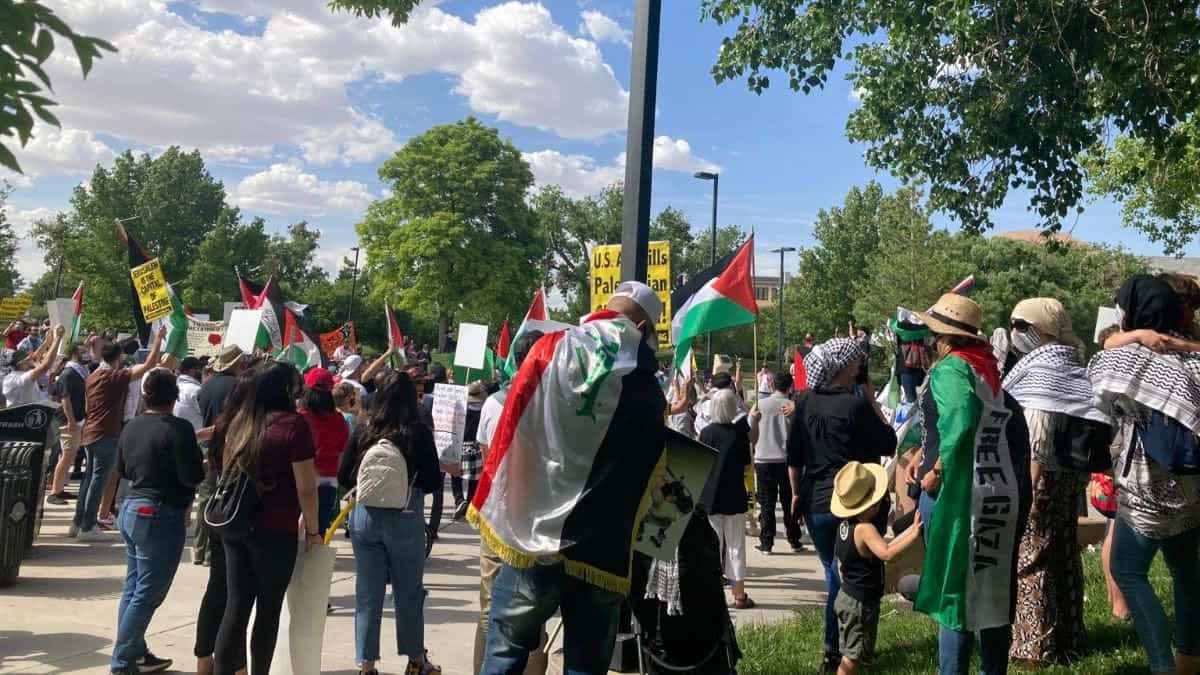 Picture from the 2021 Nakba commemoration at Tiguex Park.

In effect, “Palestinians have been robbed of the right to narrate their own past” because, “in order for Israel to establish itself, it needed to erase the identity of the indigenous population. For an identity to be formed, it must be grounded in tradition and a shared notion of historical memory.” Looking at the history of Zionism, we can see clearly that it is “a movement that has allied itself in every case and at every moment in its history with the powers of world imperialism; a project that has built its very existence on the colonization of another people, the Palestinian people, on the obliteration of their history, their culture, and their land” (Palestine: A Socialist Introduction, 31). With these words, we can better understand the importance of historical memory in struggles for justice and liberation.

The strategy of erasure is also something that I have witnessed time and time again in Guatemala. Walking down the 6a avenida in Zona 1, Guatemala City, I would always see graffiti and wheat pastings across the walls with the words “SI HUBO GENOCIDIO” (THERE WAS A GENOCIDE), or “Memoria, Verdad, y Justicia” (Memory, Truth, and Justice), often times accompanied by pictures of people who were murdered or forcibly disappeared by the Guatemalan State during the Internal Armed Conflict (IAC). 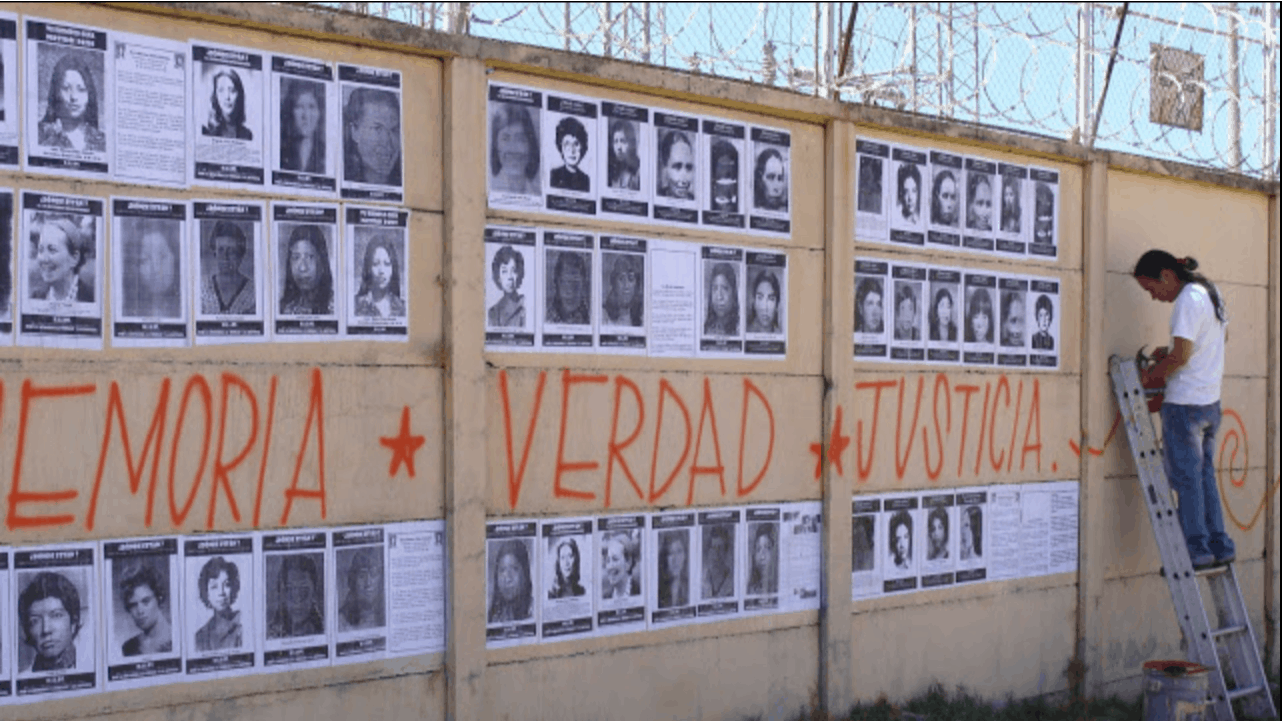 And yet, there are still many people, including high-profile politicians, who continue to deny that there was ever a genocide. One of the many resistance strategies that I have seen folks that we accompany use is to reclaim their historical memory of the atrocities that occurred–through commemorations, testimonies and oral histories, and exhibitions like the Casa de la Memoria (House of Memory) that you can now tour completely virtually.

Left: Picture of the front of the Casa de la Memoria. Text in picture reads “The recognition of the crime of genocide affects all Guatemalans because, in addition to concretely causing harm to victims and their families, it has also harmed the social fabric of Guatemalans…”
Right: Picture from the Day of Dignification for the Victims of the Internal Armed Conflict commemoration.

The State also attempts to erase Indigeneity as a strategy to implement megaprojects in the name of capitalism and imperialism. A clear example of this is the case of the Escobal mine, the second-largest silver mine in Latin America. The Indigenous Xinka people have been in resistance against the mine for the past decade and are currently in the beginning stages of a court-ordered community consultation under Convention 169 of the International Labor Organization, which states that Indigenous communities have the right to free, prior, and informed consent regarding the use of their lands.

However, the State and the company repeatedly tried to deny the presence of Indigenous communities in the region around the mine, using the strategy of erasure as a way to avoid consulting the community as required by Convention 169. In the words of the Coordinator of the Diocesan Committee in Defense of Nature (CODIDENA), one of the organizations that we accompany, “The Xinka People have historically been made invisible by the Guatemalan State. Today, we are not surprised that a foreign company like Tahoe [the previous mine owner] is using the same discriminatory mechanisms to negate our existence in the area to protect its investment. This is history repeating itself with the same goal as always: to displace our communities. Who are they to decide who I am and violate my right to self-determination? That is my right.”

Through rigorous community organizing, the Xinka people were able to combat this invisibilization campaign through revindicating their Indigenous Xinka identity. You can learn more about the Xinka resistance by watching this event we helped organize alongside the Oberlin Students in Solidarity with Guatemala (OSSGUA) and the Xinka Parliament, another organization we accompany (grabación en español). 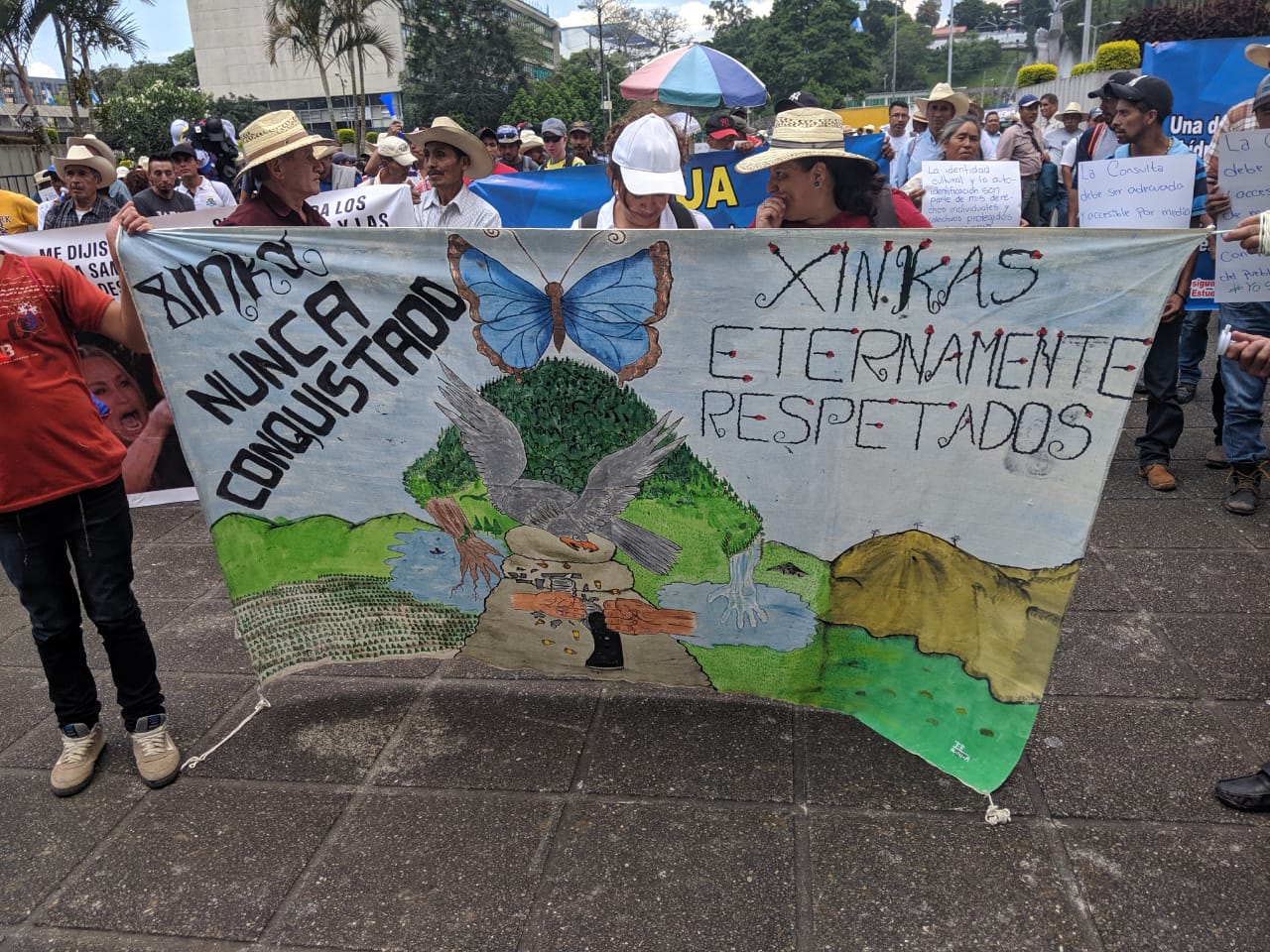 Moreover, State imperialist violence is not isolated, but deeply interwoven across the globe. For example, in the 1980s, during the height of the Internal Armed Conflict and genocide in Guatemala, Israel provided funding and arms to the Guatemalan military, making Isreal complicit in the genocide of Maya peoples. Additionally, U.S. Immigration and Customs Enforcement (ICE), which has a long history of human rights abuses against Indigenous Guatemalans and others seeking refuge, sends agents every year to train in Israel through joint workshops. ICE also uses Israeli surveillance technology to “capture and detain immigrants and refugees crossing the US-Mexico border [which is] tried and tested on Palestinians under occupation” (Palestine: A Socialist Introduction, 53).

Imperialist states are well organized and know how to coordinate amongst each other to maintain their power. We have to be just as well organized if we ever want to see a different world. Internationalism is a way forward, through understanding that struggles for liberation are not isolated, but interconnected, and therefore require trans-territorial organizing. Liberation is a process, and in any process, we must start on a small scale and build out. Educate yourself; reach out to your friends, family, and comrades, and start to have tough conversations; analyze and question the ways in which you have been socialized; build loving relationships that allow for growth and exploration; find ways to organize locally, nationally, and internationally. And remember–you have always been and will always be enough.

With love and gratitude,