On July 30, 38 national and international organizations asked the World Bank Group to take decisive measures to reverse its contribution to fostering conditions that threaten the institutional order in Guatemala. 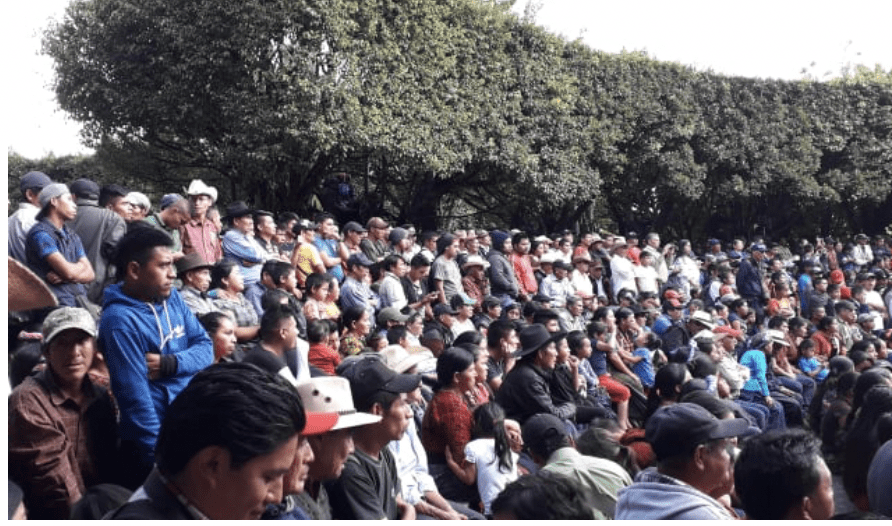 Meeting in Barillas to receive human rights defender and journalist Palas Luin, on January 2020 after he was released and charges  against him were dismissed by a judge. Photo credit: Isabel Solís/Guatemalan Human Rights Commission

We write to express deep concern regarding the developing threat to the democratic order in Guatemala and to call on the World Bank Group to take decisive action to reverse its own contribution to facilitating conditions that now threaten the democratic order and the protection of fundamental rights of the people of Guatemala.

Over this past month, criminal networks, using their influence in the state, have sought to consolidate control over the judiciary in Guatemala both through advancing an illegal nomination process to replace the nation’s appellate court judges, and through promoting a technical coup d’etat against the country’s highest judicial authority, the Constitutional Court. This attack on the foundation of democratic governance has been decried by the Inter-American Commission on Human Rights and the United Nations Special Rapporteur on the independence of judges and lawyers.

The attempted technical coup against the Constitutional Court began just a few days after a landmark ruling relating to the Fenix nickel mine operation in the El Estor municipality. The Constitutional Court ordered Fenix’s license reduced to 1/40th of its size to bring it into compliance with environmental laws, and that even operations in the drastically reduced area be suspended pending consultation with indigenous communities impacted by the project. The ruling affirmed the obligation to consult indigenous communities, clarifying that the results of consultations determine if the project may be carried out or not. As the first steps toward the consultation in the area were scheduled to begin, on July 19, the President of Guatemala declared a State of Siege, placing precisely those areas under military control, suspending the rights to assembly and freedom of movement, and allowing arbitrary detention and imprisonment. The use of emergency decrees suspending rights has become routine in Guatemala.

The Bank has partnered with and significantly strengthened the very same corruption networks that are behind these attacks against the fundamental principles of democracy—and now must reverse that partnership. Corrupt networks in Guatemala have attained a high level of influence in state institutions, working within those networks to promote impunity, violence and corruption. Using these tools, criminal networks advance industrial agriculture, mining and hydroelectric projects that extract resources from indigenous and small farming communities. The same corruption networks also ensure the undisturbed operation of organized crime. Supporting these activities is contrary to the World Bank’s mandate and operational directives.

The International Finance Corporation (IFC), largely through financial intermediaries, is a key partner to many of the businesses that benefit from and actively participate in corruption and criminal networks and enrich themselves at the expense of indigenous and small farming communities. Indeed, by gaining income from these investments, the World Bank, too, is partaking in unjust enrichment at the expense of these communities.

Criminal networks that increasingly control Guatemalan state agencies use the most coercive and abusive expressions of state power for the enrichment of a corrupt and extremely violent governing kleptocracy which is intrinsically racist—constructed, in fact, on a genocide that occurred less than 40 years ago. While displaying banners calling for an end to racism, the World Bank Group is partnering with—and profiting from—the most violent expressions of a highly functioning, racist system.

The Maya Q’anjob’al of Barillas, Huehuetenango are among the peoples that were targeted with acts of genocide. Then , five years ago, indigenous authorities who were illegally and unjustly imprisoned wrote to the Compliance Advisor Ombudsman (CAO) to present a complaint against the Hidro Santa Cruz in Barrillas, which, using IFC financing, attempted to impose a hydroelectric project using the Q’anjobal communities’ C’an B’alam river, using illegal licenses and what some evidence suggests are illegally obtained property rights. The results of a 2007 consultation were ignored, and the state did not carry out any process that could be characterized as the required consultation of indigenous communities. When communities protested, the company conspired with local prosecutors to maliciously target local indigenous authorities for wrongful prosecution. As a result, 20 authorities spent almost two years in prison, while dozens more were unable to look for work or market their products for fear of wrongful imprisonment. At the same time, company security forces inflicted violence on the communities.

Though the CAO finished its audit in December 2018, it was not until April 2020 that the IFC issued a response, published at last on June 11. We were shocked and saddened to read the IFC’s response, which, for its part, constitutes a concerning indictment of the capacities, policies, and practices of the IFC. With its response, the IFC newly brutalized the same people whose human rights were violated so that IFC would profit. The IFC shirked responsibility for the end use of its financing, shifting responsibility to the IFC’s financial intermediary, and in doing so defied its own operational directives. The IFC defended positions regarding free, prior, and informed consultation that are contrary to Guatemalan jurisprudence, laws and international conventions. The IFC ignored the results of the good-faith community consultation carried out with the participation of approximately 50,000 inhabitants of Barrillas in 2007 in which extractive projects were rejected.

The IFC touted the deeply flawed acquittal of the self-confessed murderer of a Q’anjob’al leader as an exoneration. The assassin, a former security chief for the company, was defended by the same lawyers who defended genocide authors and former presidents Efrain Rios Montt and Otto Perez Molina. His release can only be described as an indictment of Guatemala’s judicial system. At the same time, the IFC minimized the exoneration in court of wrongly imprisoned indigenous authorities as a release. It was only after the wrongly imprisoned indigenous authorities became a focus of intense observation by national and international human rights organizations, including the Office of the High Commissioner for Human Rights that the case was transferred to special prosecutors and vetted high impact courts in Guatemala City. Only then were the abuses of the company and prosecutors in Huehuetenango exposed and the wrongfully detained released. Even so, the persecution of Q’anjob’al authorities continues.

Nearly 40 years ago, the World Bank financed the Chixoy dam, which led to acts of genocide against the Maya Achi people. The Rio Negro community was targeted in five massacres, one consisting of the slaughter of 107 children and 70 women. Then, like the more than 30 terrorized neighboring communities, it was deprived of its land and livelihood. The case of Rio Negro is notorious and contributed to the motivation to create the Safeguard Policies at the World Bank, yet these communities still have not received restitution. The communities displaced by the Chixoy dam were only a few of hundreds of indigenous communities in Guatemala targeted with violence, indeed crimes against humanity, in order to access resources held by indigenous and rural communities.

Hydroelectric projects recently or currently financed by the World Bank and its financial intermediaries, such as the HidroXacbal, Oxec, and Santa Rita, among others, are built on land taken from Mayan communities, often with the assistance of the violent networks the genocide implanted. This scenario applies, also to industrial agriculture initiatives financed by the World Bank. The IFC has financed Naturaceites, Ingenio Guadalupe, and Pantaleon, among other industrial agriculture companies that are deeply implicated in destroying the livelihood of indigenous and small farming communities.

Mining companies that are the beneficiaries of World Bank investments, such as Cementos Progreso, have destroyed communities using counter-insurgency tactics in times of peace. There are indications that loans intended for Small Medium Enterprises (SME) may have benefited the Mayaniquel mining exploration corporation, which then became part of the illegally operating Fenix nickel mine.

We have long heard explanations from the World Bank administration that it considers human rights to be political and cannot take human rights conditions into consideration. No stance could be more misguided. A nation cannot prosper, and the essential business needed to build a healthy and equitable society cannot grow when there are no consequences for the violation of the most fundamental contracts governing human relations. Guatemala is at a crisis point; the nation’s highest court is under attack and its rulings are flagrantly disobeyed in the interest of further entrenching corruption, a reality which leads to dispossession and violence.

The World Bank must take all necessary measures to inform its government and private sector partners in Guatemala that investing in a country that does not respect its own judicial system jeopardizes compliance with the World Bank’s operating directives, and all financing that contravenes these directives must be ended.