Ixil survivors remain committed to search for justice, as trial moves to Nebaj

The Ixil genocide case retrial was moved to Santa María Nebaj for this week, following plaintiffs’ request for the judges to hear testimony in the region against former de facto dictator Ríos Montt and former head of military intelligence, José Mauricio Rodríguez Sánchez.

Antonio Caba Caba, a survivor and member of the Association for Justice and Reconciliation (AJR), highlighted the necessity of the decision, saying “There are elderly witnesses with health problems. Therefore, it was important to ask for the trial to be moved here so that they have the opportunity to give their testimony, despite the distance. Also, it’s important that the case is here, because it’s here in Ixil territory that there was genocide.”

Community members from around the Ixil, as well as national and international human rights organizations, stood outside all day in solidarity with and celebration of the women’s powerful testimonies. The Ixil survivors also celebrated their own resilience in continuously demanding justice and protecting historical memory with contests, dance-offs, singing, speeches, banners, and a photo exhibit. In the words of one survivor from the town of Xix, “Even though they make us hold the trial once again, we won’t get tired of demanding justice.”

Caba confirmed that commitment, saying “We’ve been in this struggle for years. We already have a genocide sentence. We hope to have another. And if they make us go through this a third time, we’ll do it again! The most important thing is that the genocide sentence is recognized both nationally and internationally. We have the right to demand justice and honor the memories of our massacred martyrs.”

Below, we share photos of the events in front of the courthouse, where NISGUA stood in solidarity with the genocide survivors that continue forward in the struggle for justice. 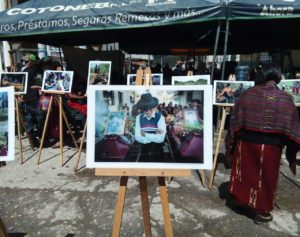 A woman looks through the photo exhibit, commemorating exhumations, burials, and the genocide sentence. 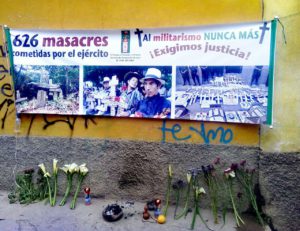 An altar was constructed below a sign calling for justice and an end to militarization. 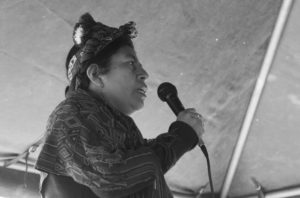 An Ixil woman speaks about justice and memory. Photo: twitter.com/VerdadJusticiaG 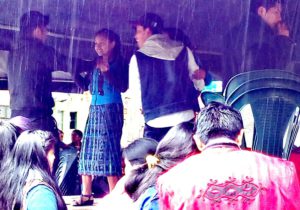 Ixil youth participate in a dance-off, showing that “they never get tired” 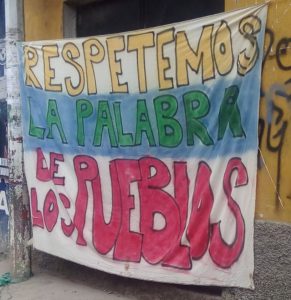