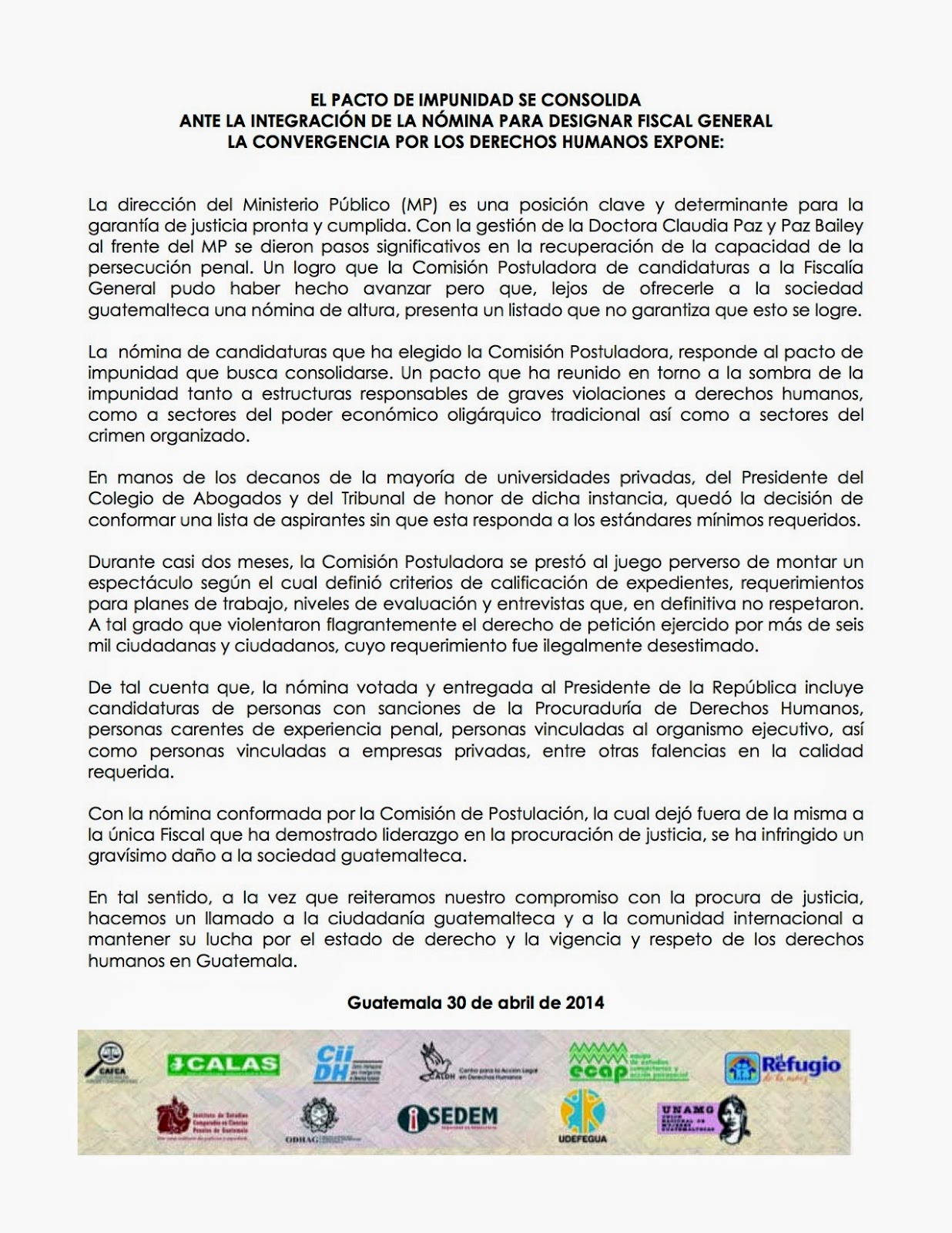 The pact to maintain impunity consolidates with the nomination for Attorney General
The Human Rights Convergence states:

The director of the Public Prosecutor’s Office is a key and decisive position to guarantee that justice is done and that it is swift. With Doctor Claudia Paz y Paz Bailey at the head of the Public Prosecutor’s Office, meaningful steps were taken in recuperating the Office’s ability to undertake criminal persecution. The Nomination Committee for candidates for the Attorney General position missed an opportunity to advance [these steps]. Instead of offering the Guatemalan society a quality nomination, it presented a list that does not guarantee that this is achieved.

The list of candidates put forth by the Nomination Committee seeks to consolidate a pact to maintain impunity. It is a pact pulled together in the shadow of impunity, by structures responsible for grave human rights violations, sectors of the traditional economic power of the oligarchy and sectors of organized crime.
In the hands of deans, the majority of whom prevail from private universities, the President of the Guatemalan Bar Association and its Ethics Tribunal, the decision was made to form a list of applicants that does not comply with the minimum standards required for candidacy.
During nearly two months, the Nomination Committee joined in the perverse game, mounting a spectacle in which criteria was defined for rating the candidates’ qualifications, including requirements for work plans, education levels and interviews; criteria that was not respected in the end. [The Committee]  flagrantly violated the right to petition exercised by more than six thousand citizens, whose demand [that Paz y Paz be included in the final list of candidates] was illegally dismissed.
Therefore, the list of candidates that was approved and delivered to the President of the Republic includes people who have been sanctioned by the Human Rights Ombudsman’s Office, people lacking experience in criminal proceedings, people linked to the executive office, as well as people linked to private companies, among other shortfalls required for the position.
By presenting this list of candidates, which left out the only Attorney General who has demonstrated leadership in the pursuit of justice, the Nominating Committee has inflicted grave damage on Guatemalan society.
Thus, we reiterate our commitment to the pursuit of justice and we call on all Guatemalan citizens and the international community to uphold the rule of law and respect for human rights in Guatemala.
Guatemala, April 30, 2014
nisgua_admin2019-12-27T19:02:19+00:00May 6th, 2014|Justice and accountability|