On International Human Rights Day, we recognize that the language of human rights has not always served to advance social justice. In many cases, it has functioned as a smoke screen for imperial institutions to validate or obscure their violence. The U.S. government used the rhetoric of human rights to support its invasion of Iraq, which has led to the deaths of over 200,000 civilians over the last 15 years. The United Nations claims to be founded on the idea of human rights, but survivors all over the world have repeatedly accused their personnel of sexual violence.

And yet, through forty years of transnational solidarity work, we at NISGUA have continually learned from our Guatemalan partners and U.S. allies about the important role of human rights in struggles for liberation. Today we lift up these lessons learned in hopes of contributing to a more just and liberated global movement for human rights.

1. Water is a human right that is gravely under threat.

“Mni wiconi,” the Lakota phrase meaning, “Water is life,” has become a rallying cry for Indigenous-led movements against pipelines across North America. From the NO KXL marches to the Standing Rock resistance camps, Indigenous people across the US have affirmed the fundamental value of water: water is life. According to the UN Universal Declaration of Human Rights Article 3, “Everyone has the right to life, liberty and security of person.” Even so, many of the most powerful governments and corporations in the world are actively putting essential water sources at risk.

Enbridge, a Canadian multinational energy company, is currently threatening water and wild rice in Anishinaabe territory of northern Minnesota and Wisconsin. The Line 3 Replacement Program would increase the capacity of the outdated and deeply corroded Line 3 Pipeline to carry tar sands oil from Alberta, Canada to Superior, Wisconsin. The new Line 3 would violate treaties from 1854, 1855, and 1867 in which the Anishinaabe people gave the US government specific limited permissions to settle in the area. The treaties protected tribal members’ right to hunt, fish, and gather, along all other rights not explicitly given to the settlers.

“Water is not only a human right, it’s so much more than that,” shares Debra Topping, a water protector with Honor the Earth and a Fond du Lac Anishinaabe grandma. “The beavers out there need it, the fish, the frogs, and who eats all of that? Us. I can trace back 14 generations on this land. And if I look 14 generations ahead we can’t eat any of the fish even here on the Fond du Lac reservation. They’re poisoned.” 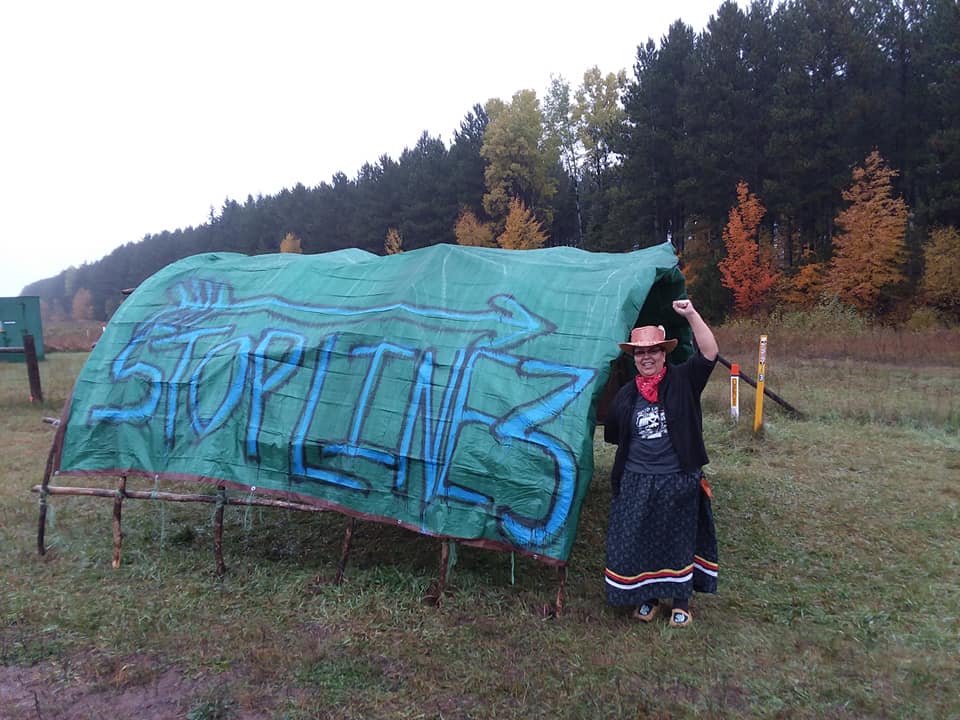 Debra Topping, Anishinaabe grandma and water protector, stands next to a Wananogan in the Fond du Lac reservation. The Wananogan was erected by members of the resistance against Line 3 on the pipeline’s proposed path. Photo credit: Debra Topping

2. Civil disobedience can be used to protect human rights.

Throughout human history, especially after European invasion of the Americas and the growth of neoliberalism in the 1970s, laws have frequently protected private property while blatantly violating human rights. All across the globe, civil disobedience has been used repeatedly to fight against unjust laws and governments when all other options have been exhausted. Guatemalan movements offer many examples of using civil disobedience to protect culture, land, and natural resources.

After seven years of resisting the Mina San Rafael through legal means, the Peaceful Resistance of Santa Rosa, Jalapa, and Jutiapa created a resistance camp in Casillas that stops mining vehicles from passing through the highway to the mine. The camp was created after the affected communities had repeatedly demanded a community consultation, the mine’s private security force shot and injured seven peaceful protesters, and the broad scale resistance brought multiple cases against the mine in Guatemalan court. The resistance camp has stayed in place through continued threats, assassinations, and criminalization, successfully stopping mine operations since June 2017. 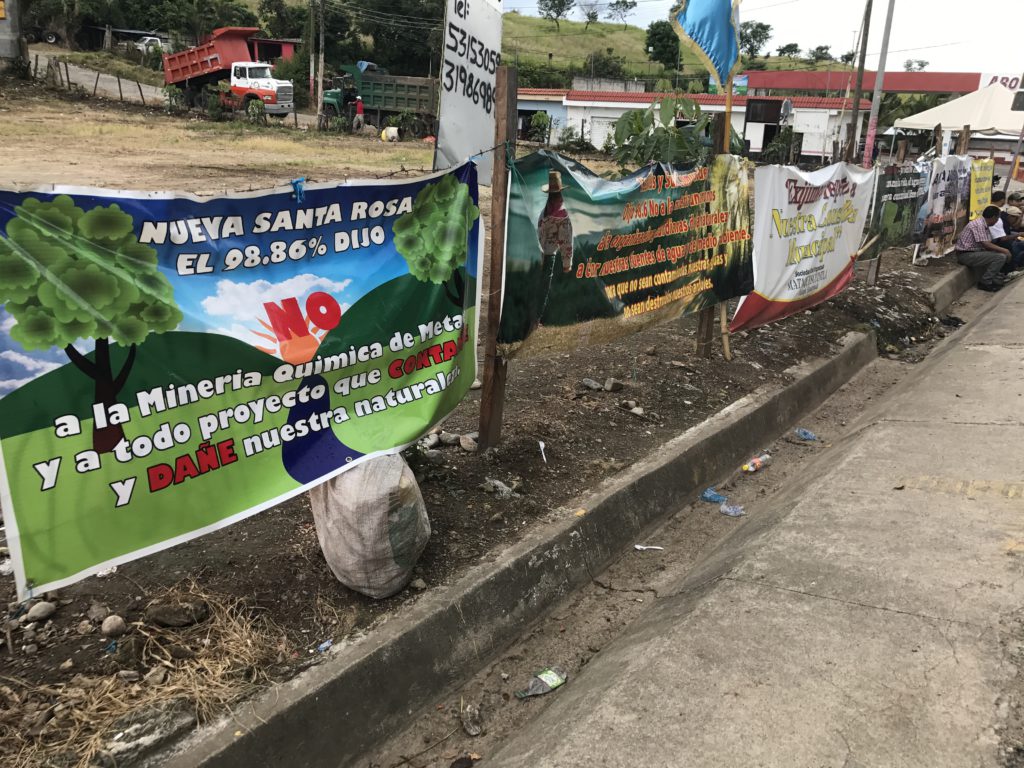 People gather at the resistance camp in Casillas. The nearest sign reads: “98.86% of Santa Nueva Rosa said NO to the chemical metal mine and all projects that contaminate and hurt our environment.”

The story of human rights is often told as one of Western countries pushing forward a progressive agenda after WWII. Our partners, the world’s First Peoples, continually teach us and the world that human rights as seen by the UN can complement their respect of life and self-determination, but did not create it. For example, the International Labor Organization (ILO) Convention 169 can be a helpful international recognition of Indigenous peoples’ right to free, prior, and informed consent regarding projects within their territory. However, the Indigenous practice of community consultations in Guatemala is a fundamentally democratic ancestral practice that existed for countless generations before the UN was even an idea.

Our partners working to demand justice for past crimes have taught us that while legal decisions can be part of the path for justice, it is not the only destination. Survivors of the Mayan genocide who created the Association for Justice and Reconciliation (AJR), struggled for 18 years to see the intellectual authors of the genocide from 1982-1983 convicted. They celebrated the two court sentences in 2013 and 2018 that affirmed what they had always said: the military committed genocide in Guatemala. They also grieved and condemned the corruption of a system that continually attempts to let the architects of the genocide go free. Throughout the entire journey, they have used teach-ins, commemorations, and public memorials to heal their communities, knowing that their safety and peace digs far deeper than a system that fails them. 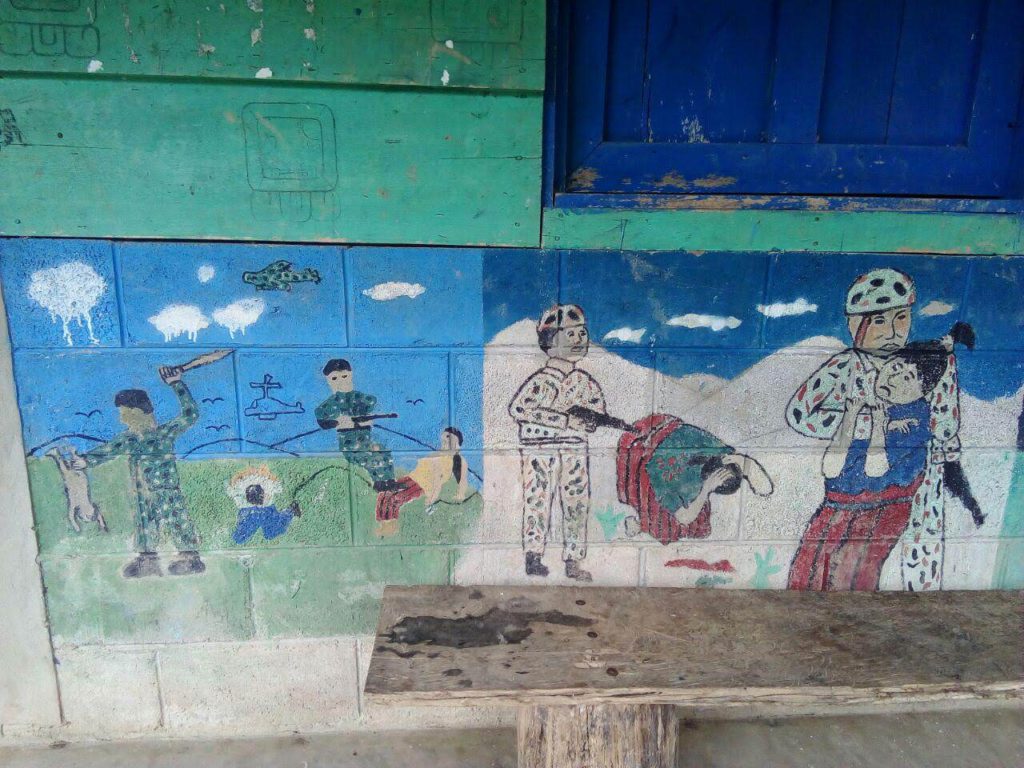 A community in Copal AA La Esperanza, Cobán, Alta Verapaz, depicts the horrors that community members lived during the internal armed conflict. Murals and other public art serve to maintain historical memory of the massacres and heal the survivors.

4. Human rights are one tool among many.

Our partners and allies use a diversity of tactics in their struggle. ACODET, the Association of Communities for Development and the Defense of Land and Natural Resources, is an organization made up of Q’eqchi’, Mam, Q’anjob’al, and K’iche’ communities that have successfully resisted the imposition of the Xalalá dam for over eleven years. ACODET uses many strategies in its struggle, one of which is a discourse of human rights.

ACODET focuses first on its own communities, sending coordinators to each community to collect information and share news. Working closely with the ancestral authorities, each town carefully monitors the roads leading to the river and does not allow strangers to enter. From a young age community members learn about the river and why it is important, studying maps made by ACODET that show how the proposed dam would flood their homes. ACODET facilitates alternative building through a program of new stoves that use less wood and create less smoke, and a crop diversification project that seeks to grow cash crops other than cardamom.

Outside of the communities themselves, ACODET hosts annual commemorations of the 2007 community consultation in the seat of the Ixcán region, Playa Grande. ACODET produces communications denouncing threats against itself and other land defenders, and is currently seeking signatures for its public statement on protecting community consultations. ACODET also speaks with international delegations about their struggle, including groups from NISGUA and representatives from the UN.

Throughout everything that ACODET does, human rights are a key element of their discourse. However, at the core is something much deeper, something that can teach their allies to more holistically struggle for justice. Ultimately, ACODET and our other partners are fighting for self-determination of their communities, or, in a word: life.

A sign in Copal AA La Esperanza, Cobán, Alta Verapaz, one of the ACODET communities, reads: “In the community consultation of good faith the people of Ixcán said: no to the dams, no to petroleum exploitation, yes to life and land for indigenous peoples. ILO Convention 169 Article 1: The right to consultation and free, prior, and informed consent.”