Accompanier Perspectives: Guatemalan History – The coup, the conflict, and the consequences

In her first letter from Guatemala, Claire Bransky provides a brief history of Guatemala and how its people have been affected by forces of racism, exploitation, and the US’s imperialism.

As a volunteer with NISGUA’s Guatemala Accompaniment Project (GAP), Claire provides accompaniment through the international coalition ACOGUATE to Guatemalan activists seeking justice for crimes of the past and looking to protect their lands and waters from ongoing systems of exploitation and oppression. These activists often face threats, criminalization, and violence for their work. Through physical presence, monitoring, and reporting on these abuses, accompaniers like Claire seek to alert the international community to take immediate action in the defense of human rights. 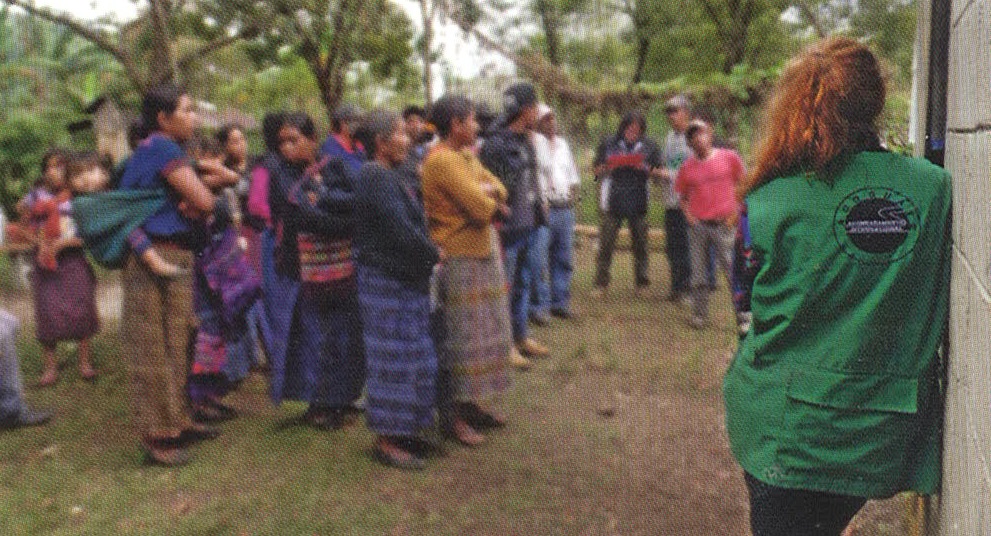 Everyday at dusk the birds of Guatemala City commune above the place where I live. I climb to the roof, where I watch them dip and dive and turn in an intricate dance that I’ll never understand. I’m sure that they’re communicating, somehow. The swerve of one affects the leap of another affects the swoop of another. As I try to make sense of their dance I’m thinking about other patterns that I’ll never understand; the pulse of a crowded concert, the paths vendors make through a busy market, the rushes of human beings across geopolitical borders. The vote of one affects the job of another affects the safety of another.

The shameful fact is that almost all my knowledge begins in the mid-20th century, but obviously Guatemala’s history begins long before European invasion. If you would like to learn more about pre-Invasion history in Latin America, I have heard that 1491: New Revelations of the Americas Before Columbus is an excellent source.

Pedro de Alvarado invaded what is now known as Guatemala in 1525. He and his men then began to kill and kidnap the people they met, an act that would characterize the next five hundred years of colonization in this hemisphere. Most historians point to 1821 as the beginning of Guatemalan independence from Spain, but many Guatemalans feel this is a misnomer. Instead of being ruled by a white monarch from a different continent, the vast majority of Guatemalans continued to be controlled by the white landowning elite who ruled through economic exploitation and a strict racial caste system. To this day it is questionable if true freedom has been achieved; indigenous Mayan peoples make up 60% of the population but only 13% of Congress, and 1.86% of producers have access to 56.59% of the land. Perhaps even more shockingly, 92.06% of producers have access to 21.86% of the land. (1)

Following “independence” a group of dictators who were supported by the U.S. government and business class ruled Guatemala. The conditions of slavery and political repression that these dictators forced upon the indigenous majority were accepted by our government as long as the dictators continued to give cushy benefits and control to US industry, specifically the United Fruit Company (UFCO). La Frutera, as the UFCO is known in Guatemala, controlled nearly all the country’s railroads, telephones, and ports. It also was one of the largest landowners, contributing to the fact that in the early 1950s 72% of Guatemalan land was owned by 2% of landowners. (2)

In 1944 the Guatemalan people overthrew the ruthless right wing dictator, Jorge Ubico, in a mostly bloodless revolution, and held the country’s first democratic elections ever. Dr. Juan José Arévalo Bermejo won the election and began what is now known as the Ten Years of Spring. These ten years were characterized by modest liberal reforms, moderate gains in socioeconomic equity across the country, and a commitment to democracy that was upheld by almost all arms of government. Following Arévalo’s term in office, Guatemala voted in Jacobo Árbenz, a former military officer. I do not want to imply that Arévalo and Árbenz were perfect leaders, but the democratic reforms that they upheld were a serious improvement over the near-enslavement that the indigenous and campesinx majority had suffered under previous dictators. (Why do I use “x” at the end of words?)

Despite being a moderate liberal, in 1952, during the Cold War, Árbenz created a piece of legislation that the U.S. labelled as “communist.” The Agrarian Reform of 1952 nationalized uncultivated land from large landowners and redistributed it to landless campesinxs. Now, keep in mind that the government wasn’t just taking the land — although one could certainly make an argument that this would have been a just and legitimate action — but was actually paying owners for the whole land value that they had reported in their 1952 taxes. However, accustomed to friendly dictators who had allowed them to do anything for decades, corporations like La Frutera had under valued their property in order to pay less in taxes. Once their (uncultivated!) land was nationalized, La Frutera immediately set out lobbying the US government to stop the “communists” from “stealing” their land.

What happens next is one of the most shameful (and largely overlooked) sections of US history. Working in conjunction with La Frutera, the U.S. embassy in Guatemala, and the State Department, the CIA orchestrated a coup against Jacobo Árbenz in 1954. You might be wondering what exactly orchestrating a coup looks like. Here are a few acts that I think capture how involved the CIA was in everything that led up to and happened between June 18 and 27, 1954:

After nine days of psychological and physical trauma against the Guatemalan people, Árbenz gave up. He and the army recognized that with the U.S. behind Castillo Armas there was no hope for negotiation and was unwilling to risk bloodshed. On June 27, 1954 Árbenz handed over power to a colonel named Carlos Enrique Díaz de León who he hoped would maintain some element of his commitment to democracy.

With Árbenz gone, the U.S. regained near-complete control of Guatemala. The loss of Árbenz led to a power vacuum, repeated coups, and a long series of military dictatorships. (3)

In 1960 three army officers rebelled against the Guatemalan government and set up a base of resistance in the mountainous campo, beginning what many know of as the Guatemalan Civil War. In my writing I will be referring to these 36 years as the internal armed conflict, as “Civil War” implies a more even division of violence and strength, not an uneven armed conflict between groups of peasant soldiers and the entire might of the Guatemalan and U.S. militaries.

The dynamics of the internal armed conflict were complicated and changed tremendously over time. In general, there were various armed groups in rural areas that used  guerrilla tactics and were supported by insurgent allies in the capital. These revolutionaries may have been motivated by democracy, land justice, racial justice, socialism, communism, anti-authoritarianism, or any/all of the above. On the other side stood the entire Guatemalan army, which was largely funded, armed, and sometimes trained by the U.S. military. One poignant and still relevant example of US involvement in the Guatemalan army was the School of the Americas (SOA), a military academy in Georgia that trained officers from all over Latin America in “counter-insurgency” tactics. Many of the architects of the worst horrors of the internal armed conflict were trained at the School of the Americas. In 2001 Congress “closed” SOA and reopened it the next day, rebranding it as the Western Hemisphere Institute for Security Cooperation (WHINSEC). The goals and operations of WHINSEC remain largely the same.

The Guatemalan military’s participation in the internal armed conflict was characterized by massacres, rape, torture, forced disappearances, sexual slavery, and the destruction of ancestral trust between indigenous Mayan peoples. In the early 1980s the violence reached a climax under military dictators Fernando Romeo Lucas García and Efraín Ríos Montt, whose scorched earth policies and attacks upon indigenous non-combatants constituted genocide. I am not going to go into the specifics of these administrations and policies because I’ll be returning to them frequently in my coming letters. If you want to learn more now, here is a short documentary about the genocide.

In 1996 the internal armed conflict officially ended with the signing of the Peace Accords, but the violence has really never stopped, especially for indigenous Mayan Guatemalans. Many of the massacres were specifically planned to clear land for neoliberal resource extraction, so internally displaced peoples and refugees were in grave danger when they returned to their lands. As those same mines and dams were pushed forward through neoliberal policies like the 1997 Mining Law and a free trade agreement with the US in 2005 (CAFTA-DR), campesinxs continued to face violence while defending their life and land. Throughout the last twenty years there have been repeated attempts to bring the perpetrators of genocide, torture, and sexual violence to justice. Some have been successful, some have not, and all of the people involved in these fights for transitional justice have suffered threats, defamation, and physical violence from the military leaders who still have control over the Guatemalan government. (4)

Through it all, the US has been and is an ominous shadow, responsible for moving forward horrific acts that the world is still coming to understand. I know that this can be a hard pill to swallow. The fact that 200,000+ Guatemalans died during the internal armed conflict is devastating. And the fact that our government was behind it, maybe even caused it? And that we as U.S. citizens benefited and continue to benefit economically from policies of extraction and violence against Guatemalan people? Unthinkable.

As you close your computer or put down your phone I want to challenge you to sit in these unthinkable truths. The violence happened, and it continues everyday. What we often forget in our overwhelmed paralysis is that there are brave, hardworking, and resilient Guatemalans who are fighting everyday to heal their country from the wounds of U.S. imperialism and the violence it wreaks. I hope that as we walk away we are not focused in daunting guilt, but in the ways that we can be in solidarity with the people on the front lines — it is truly the least that we can do.