Step into the House of Memory

Earlier this year, the Center for Human Rights Legal Action (CALDH) inaugurated the permanent installation of the Casa de la Memoria, an art exhibit that empowers youth to reconstruct their historical memory through the creation of personal and collective identity.

NISGUA accompanier Kayla Myers takes us on a photographic tour of the Casa, guiding us through exhibits that document resistance to colonialism, US imperialism, and ongoing militarization, while sharing the stories of people who have been silenced, communities who have been massacred, and leaders who have been disappeared. The Casa invites us to take concrete steps to preserve historic memory and continue to accompany movements for social justice.

How are our collective memories constructed? Are they formed for us in the words of experts and museum caretakers or do we form then in our own bodies and minds? Are they forced on us from the outside or expressed ourselves?

The House of Memory “Kaji Tulam” a project of CALDH, empowers youth to challenge Guatemalan society in the exploration of their collective memory. Through artistic and multi-dimensional displays, visitors to this public and permanent exhibition of Guatemalan history feel memory in their body and experience the voices of silenced perspectives on that history. By having tour guides between 13 and 24 years old they understand that history is not dead, but lived each day by the next generation.

These young volunteer guides are trained in facilitation and the history of their country and work with the goal to “reconstruct historical memory and the sense of personal and collective identity” in themselves and their society. 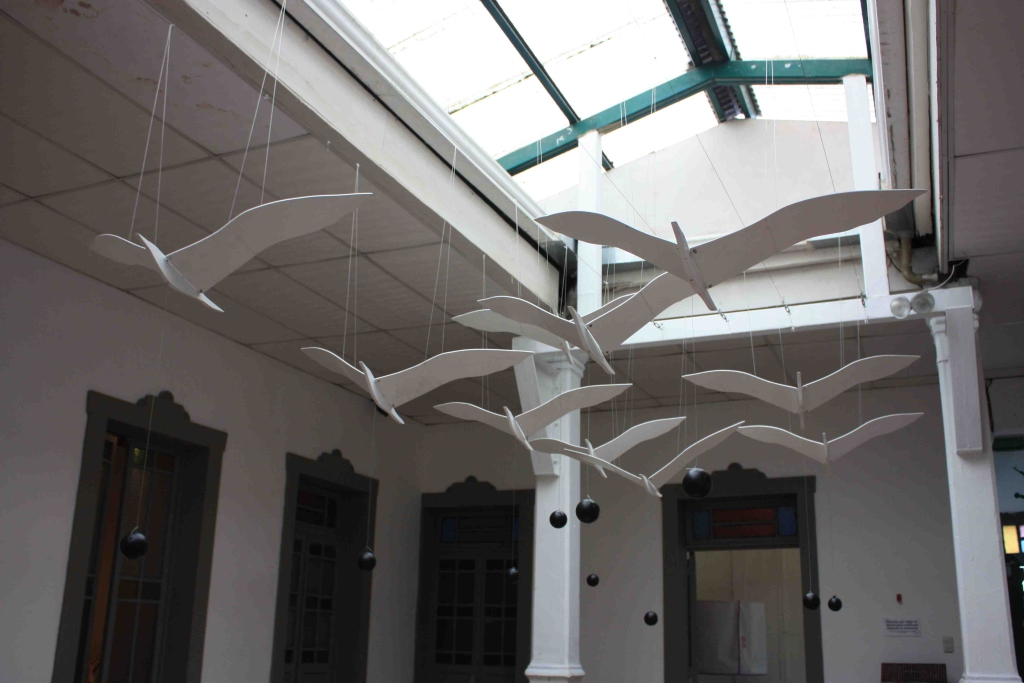 When you enter, you enter an open room with wooden birds hanging from the ceiling, as if they are circling above. The house is constructed like a seashell encircling you in a captivating story.

The first room is the Mayan empire. Time runs along the wall in the Mayan calendar counting thousands of years. Each day and year has a nahual, or a spiritual guide from the forest. Each person has a nahual assigned at birth that walks with the person all the days of their life. You discover your nahual in this room. 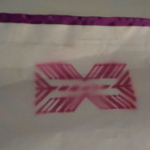 To hear the hidden voices in this seashell of a house, you must look for the Mayan symbol for butterfly pictured to the left. This symbol marks either hidden doors or hanging tents through the whole house. In each hidden space, there is the story of an incredible Guatemalan woman from that time period. In the room of Nahuales, you read about Ixmucane, the first grandmother of maize, the first female deity.

Your nahaul accompanies you into the next room, hemmed with white swords hanging from red satin. The room telling the history of conquest. 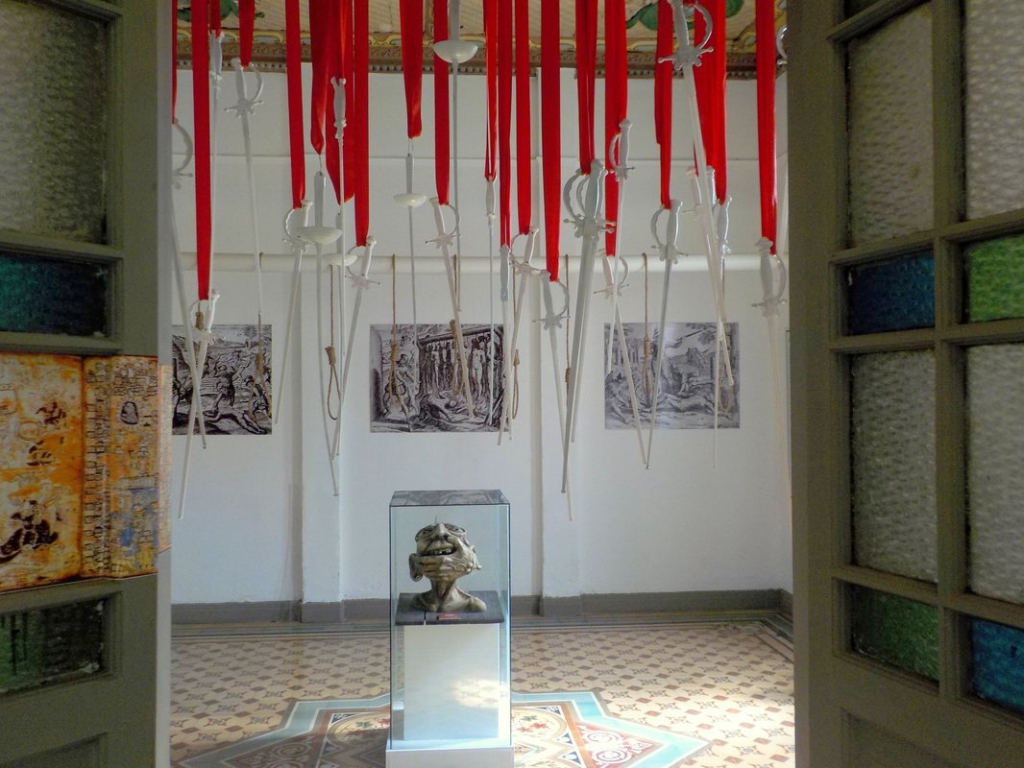 The butterfly in this room is Marta de la Figueroa, who was a midwife accused by other indigenous peoples of being a witch. She was tortured and almost lost her life being covered in hot chili powder that burned her skin. Colonizers were criminalizing the cultural practices of Indigenous people, breaking down the leadership of women, and creating fear within communities. Yet, Marta de la Figueroa continued serving her community in secrecy and passing on the wisdom of midwives. Indigenous midwives continue to practice in Guatemala today. 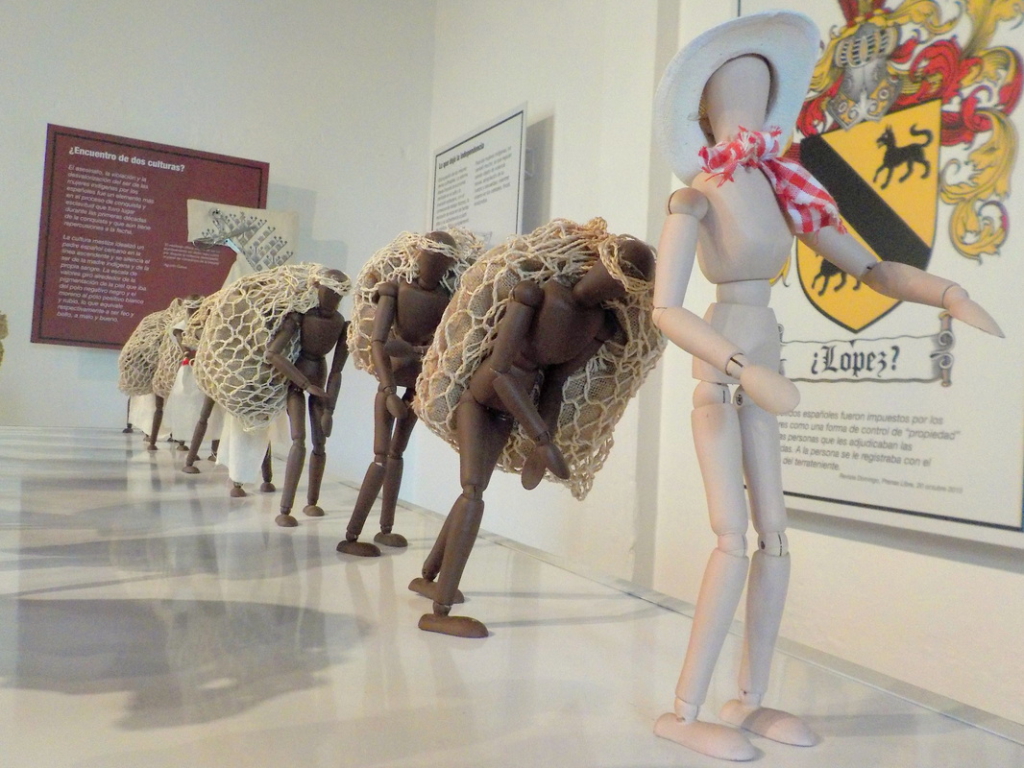 In the next room, you are greeted by a long line of figures carrying incredible loads on their little wooden backs. On every street in rural Guatemala people still carry loads this large, figuratively and literally.

This room tells the story of colonization, life on the finca, and the evolution of the institutionalized racism against indigenous peoples.

The butterfly in this room is Francisca Ixcaptá, one of the first defenders of human rights in Guatemala. She ignited a whole community into action against the Spanish colonizers, which promptly landed her in jail. Yet, she orchestrated her own escape and the escape of other incarcerated political prisoners.

The next room is 1944 in Guatemala and it is all bright colors. The figures of people are walking together on a circular platform of reform. The social threads of oppression are broken for a time in history. In these years, social security was created, research institutes were founded, the Feminine Alliance was pushed, child labor was prohibited, and an Agrarian Reform took land away from finqueros and re-parceled it out to the rightful owners.

Riding on hope you push aside a heavy curtain and enter into darkness. As your eyes adjust, you see that you are in someone’s living room, and that it has been violently demolished. Outlines of the disappeared family that had once lived there are traced on the dark wall. This is the room of the armed conflict and genocide. 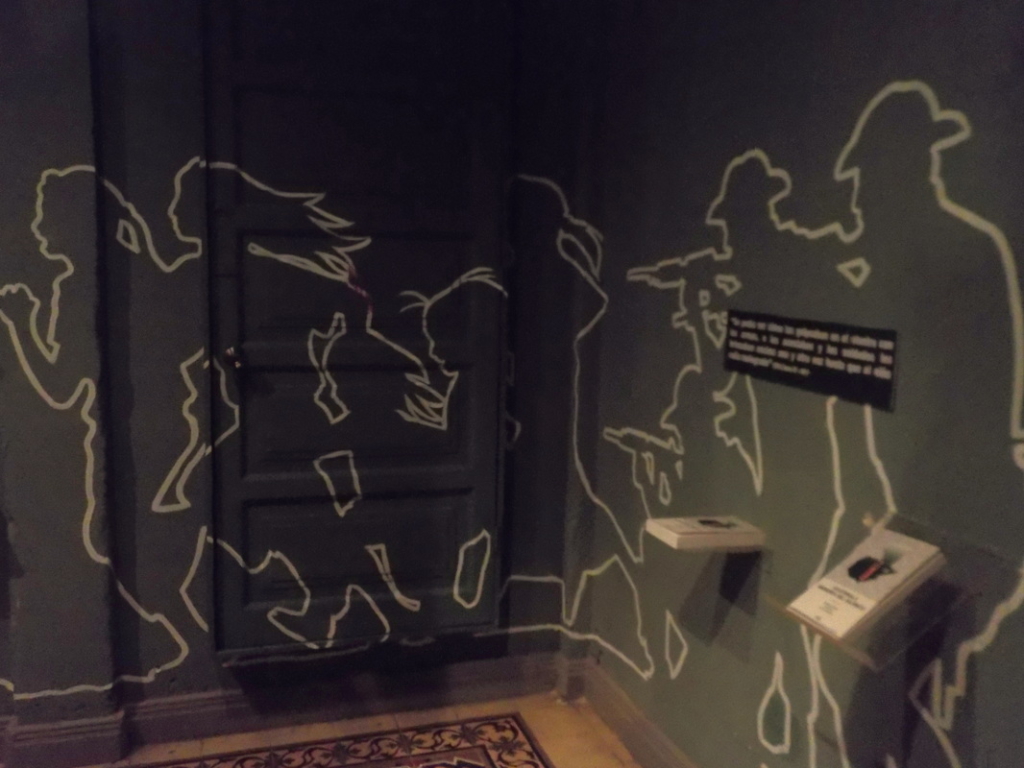 It opens up in a few feet to a standing tornado of clothing from suits to indigenous clothing, representing the upheaval in all levels of society. More silhouettes are traced on the walls- soldiers chasing fleeing citizens.

The next hallway is still sheathed in darkness, but names carved into the walls stand out in white. These are thousands of names of people massacred during the armed conflict. The inscription on the wall says:

​“Imagine a time when thinking differently was sufficient reason to kill you and your family.” 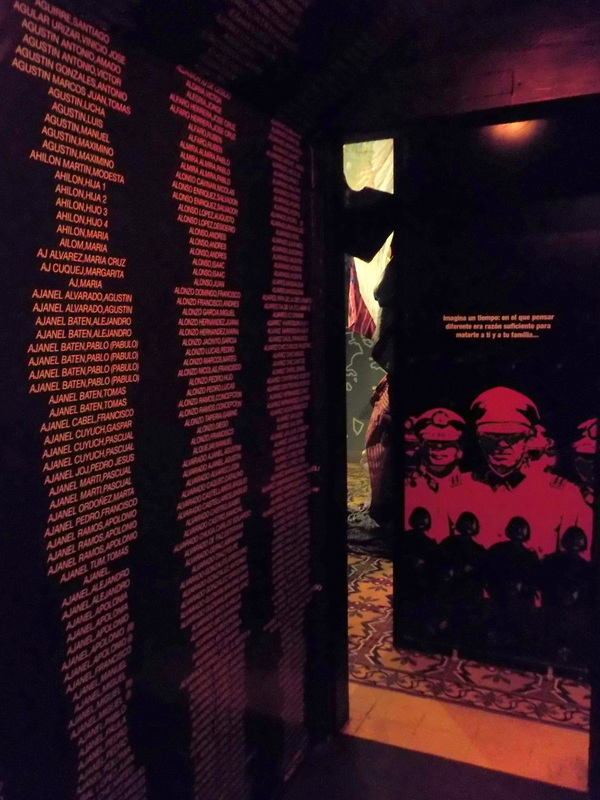 Cautiously you open the heavy curtain in front of you, guarding your steps and your spirit in case of another terror. Yet, this room is also brightly colored with flowers growing up the walls. This is the room where the survivors remind you that:

“the humanity of the population is something that they never lost.”

White letters blossom on each flower with stories of strength from the people working for justice, peace, and reconciliation in Guatemala. 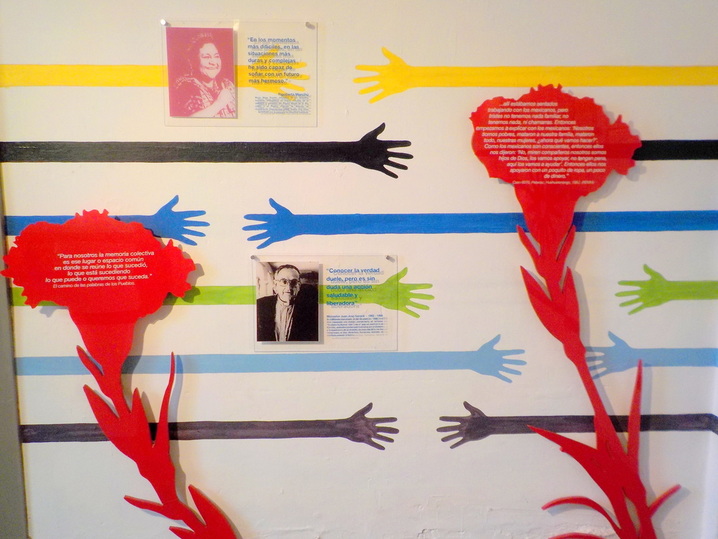 Not just one butterfly is highlighted here, but many strong Guatemalan women and women’s organizations. Adelina Caal Maquin is one of them. She was murdered in 1978 in a massacre perpetrated by the Guatemalan military yet her legacy continues to strengthen Guatemalan women. Female refugees in Mexico took her nickname, Mama Maquin, and formed a women’s organization that works for land rights and the participation of women. They now have 1400 members all over the country and continue the work. In 1993 they said:

“And we realized that as Indigenous women we are discriminated against three times as much for being women, for being poor, and for being Indigenous. We understood then that the work that waited for us was very big, but if we unite all of us we will be able to continue forward.”

The hope begins to blossom in you, but your heart drops in the next dark space. Terror, racism, and genocide are some of the words menacingly projected on the walls. A small red hand in the corner invites you to reach out. 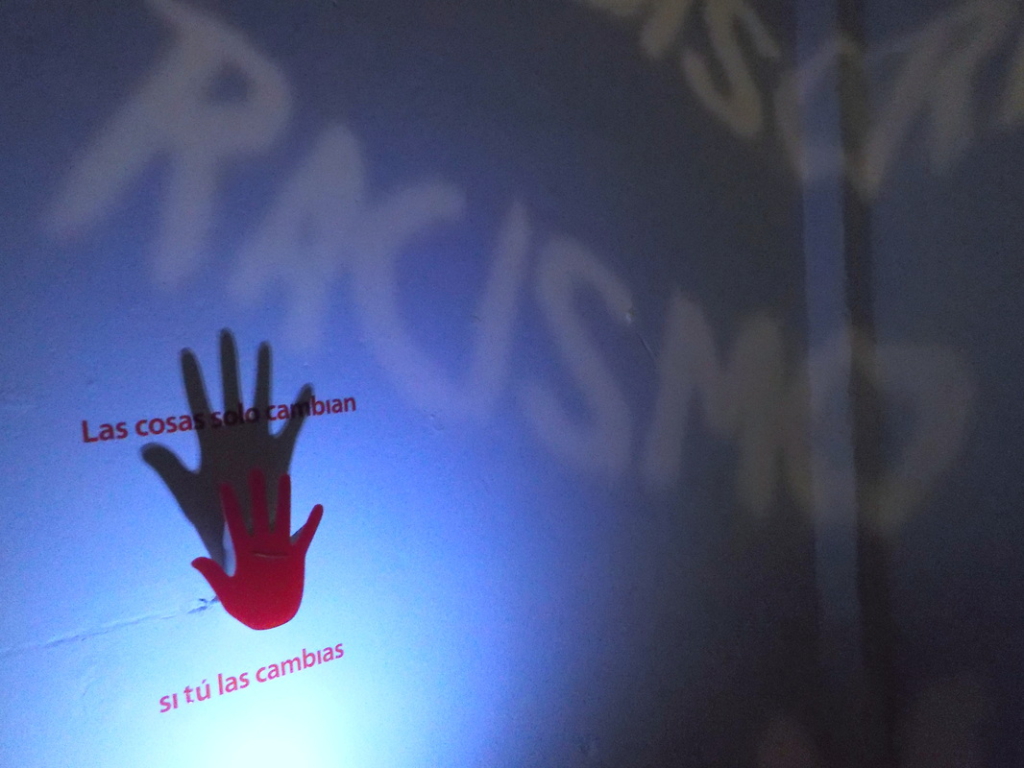 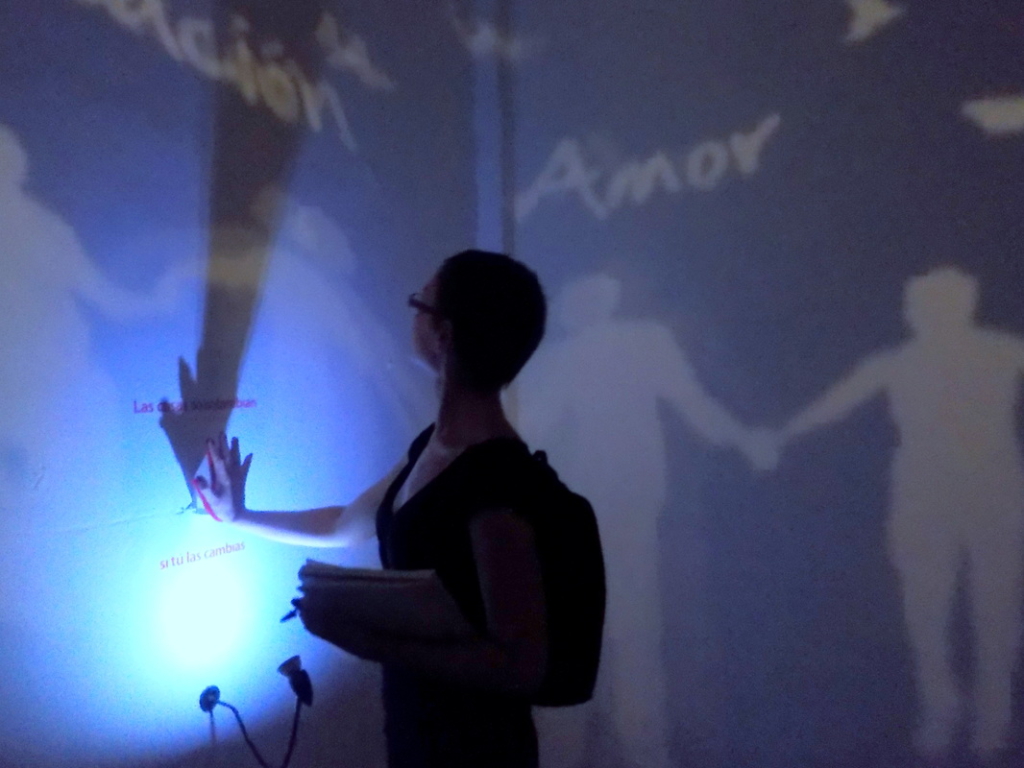 As your human warmth connects with the hand, the words suddenly change to words like understanding, love, education, and humanity because: “things only change if you change them.”

On the white walls of the next room, words are written by all the visitors who now share these memories. What do they have in common? Progress for Guatemala. The words of one youth written on this wall:

“Remember and never forget, holding each other’s hands we can, Guatemala, we are EVERYONE…!” 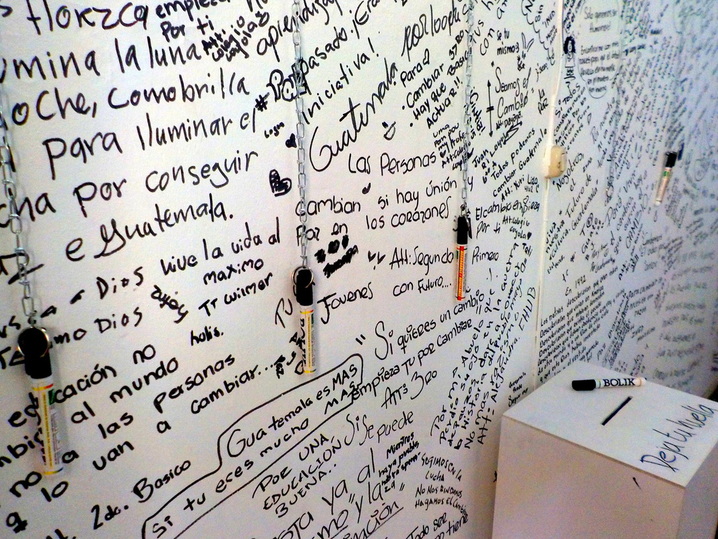 You enter the wide open space, with those wooden birds circling overhead, and realize that you are exactly where you started. You notice new little birds, red humming birds, colibris rojos. Each one is the name of an organization working today in Guatemalan civil society. Together with them, other visitors, and Guatemalan youth, you now share a part of the collective memory of Guatemala. It is in your hands, your skin, your mind, and that collective spirit moving Guatemala forward.