On October 28, 2015, a Quetzaltenango Femicide Tribunal unanimously voted to absolve political prisoners Saúl Méndez and Rogelio Velásquez of the crimes of femicide and homicide. The Tribunal rejected every single witness presented by the prosecution and questioned the political motives behind the Public Prosecutor’s decision to begin investigation of a crime three years after it took place.

Saúl and Rogelio were convicted on the same charges by a Huehuetenango court in November 2014 and were sentence to 33 years and six months in prison each. That sentence was overturned during a new trial, granted as a result of a special appeals process. 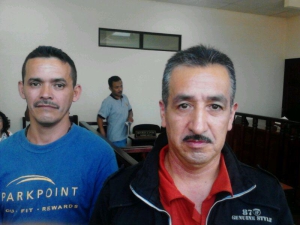 We celebrate this incredible victory for Saúl and Rogelio, their wives, children, brothers, sisters, parents and fellow community members. And while the systematic criminalization of leaders in Huehuetenango has far-reaching impacts on this peaceful struggle to defend the land and self-determination of communities, so too does the resilience and steadfastness of its leaders. The two men have spent nearly three years behind bars, including an 8-month detention after the 2012 state of siege in Barillas. Together with their families, they have received threats and have faced the possibility of life without freedom, yet they never gave in.

The struggle is not over, however. Despite being found not guilty, Saúl and Rogelio remain behind bars. In Guatemala, the courts can order immediate release or require the accused to stay in prison until the appeal process is over. Now, Saúl and Rogelio must wait until an Appeals Court approves the Tribunal’s sentence before they are freed. We call on you to remain vigilant for future actions in support of justice and freedom for Saúl and Rogelio as their case moves through its final stages.

We want to thank the NISGUA supporters who took action this summer to demand a fair and speedy retrial for Saúl and Rogelio and an end to the strategy of criminalization that has wreaked havoc on community organizing against megadevelopment projects in the department of Huehuetenango. Hundreds of people wrote personal letters to Saúl, Rogelio and the seven other political prisoners currently in pre-trial detention on charges related to their opposition to the imposition of hydroelectric projects in the region.

Another important step took place on November 4 when Pedro Robel Todelo, a Qanjobal lawyer from Santa Eulalia, Huehuetanango, was released from preventative prison after spending over a month behind bars. Robel Toledo was arrested and charged with kidnapping, criminal instigation and obstruction of justice. The charges were in connection to an incident that took place in January, 2015, while he was acting as the legal representative of two community members also accused of crimes related to their opposition to another hydroelectric dam in the region. On November 4, Judge Miguel Ángel Gálvez dismissed the charges against him, stating that the prosecution had insufficient evidence to charge him and that communities have a constitutional right to peacefully protect their land.

Robel Toledo and dozens of other land defenders from Huehuetenango have been hit with trumped-up charges that have effectively removed them from playing active roles in the leadership of resistance movements. Criminalization is a clear strategy to silence their opposition to hydroelectric dams that have been imposed in their communities without consent by companies with track records of human rights violations.

While we celebrate Robel Toledo’s release, the struggle for justice for land defenders from Huehuetenango is far from over. Despite lack of evidence, prominent land defenders from the region Domingo Baltazar and Rigoberto Juárez were charged by the public prosecutor for inciting violence that same night in January; they were arrested a month later and continue to be held in custody.

During the hearing on November 4, Judge Gálvez affirmed that the actions taken by the Public Prosecutor’s office in charging the men was a manipulation of the legal system. This declaration gives hope to other political prisoners who remain unjustly imprisoned, and to their families and communities who continue to fight for their freedom and the protection of their land and resources.