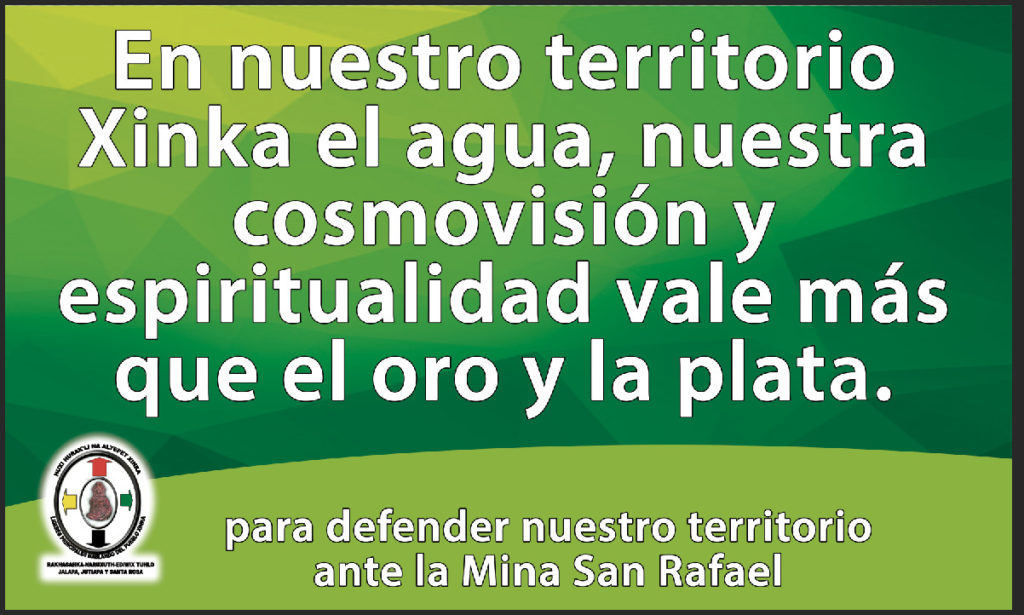 An image made by the Xinka Parliament reads: “In our Xinka territory, water, our cosmovision, and spirituality are worth more than gold and silver.”

On Wednesday, May 8th, hundreds of members of the Peaceful Resistance of Santa Rosa, Jalapa, and Jutiapa gathered at the resistance encampment in Casillas for a press conference organized by the Xinka Parliament. Women, men, elders, and children stood together in the threatening rain to hear the Xinka Parliament’s public statement denouncing Pan American Silver’s continued efforts to interfere in the consultation process.

The public statement reads: “We are currently engaged in a consultation process as ordered by the Constitutional Court in sentence 4785-2017 issued on September 3, 2018. More than six months later, this process is stalled due to intervention and illegal interference on the part of the mining company with the Ministry of Energy and Mines and the Ministry of the Environment and Natural Resources, deliberately undermining international standards related to Consultation with Indigenous Peoples … Pan American Silver has said it will respect the consultation process on the future of the Escobal mine as ordered by the Constitutional Court. And while Xinka People’s right to prior consultation has already been violated and cannot be rectified, it is imperative that the process going forward be “free”, without coercion, threats or intimidation.”

On May 8, nine U.S. and Canadian organizations also published a press release, highlighting the Xinka Parliament’s statement and the ongoing threats against land defenders in the resistance, such as Xinka Parliament lawyer Quelvin Jiménez.

Hundreds of community members gathered to listen to the Xinka Parliament’s public statement. 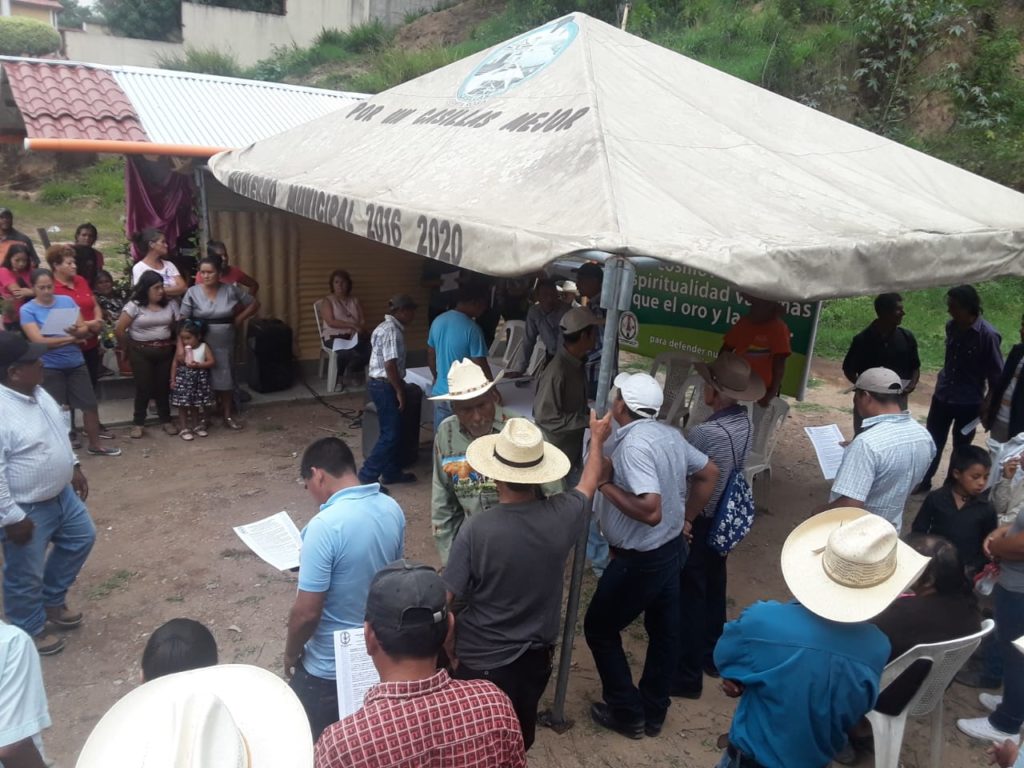 The press conference was held at the Resistance’s peaceful encampment in Casillas. 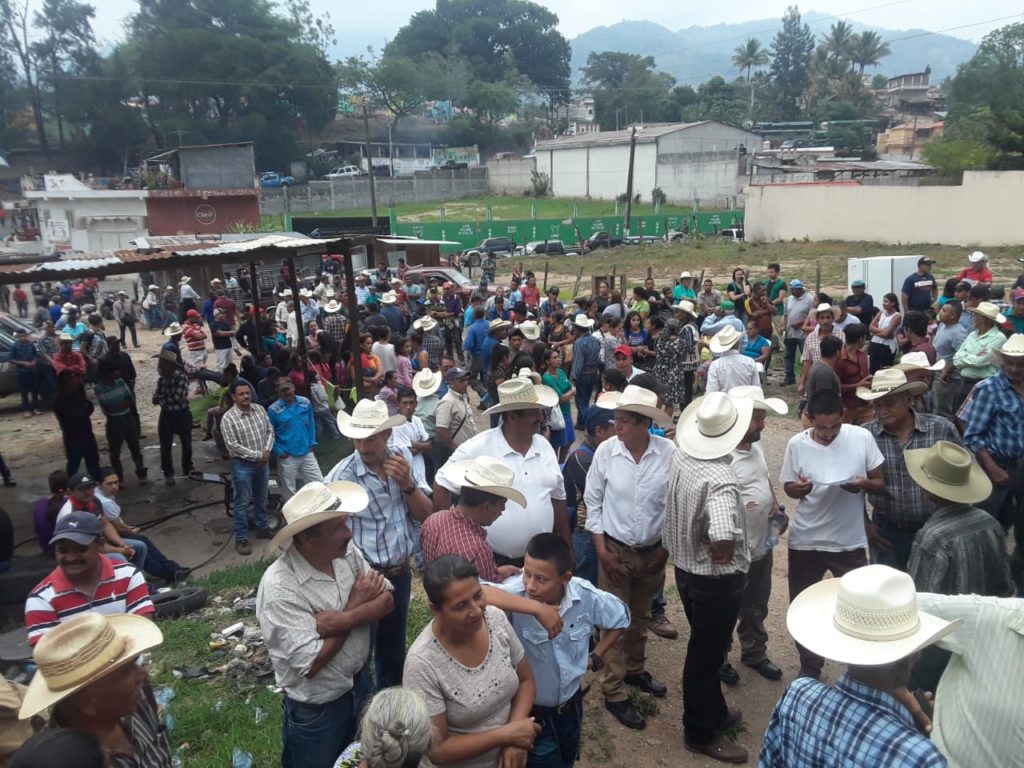 Members of the resistance traveled for hours to arrive at the press conference.

Meanwhile, thousands of miles away activists gathered in Vancouver, Canada, where Pan American Silver held their first shareholder meeting since acquiring Tahoe Resources, the previous owner of the Escobal silver project, in February 2019. Angus Wong, Campaign Manager at SumOfUs, a virtual community of millions of people from around the world committed to curbing the growing power of corporations, attended the Vancouver meeting to ask if “Pan American Silver will commit to respect Xinka People’s right to freely participate in the consultation process by suspending all attempts at dialogue, community engagement including projects or other programmes, and publicity in Guatemala?”

In response, Michael Steinmann, CEO of Pan American Silver, responded: “We are really looking forward to being part of the process, the ILO 169 Consultation Process. We are really looking forward to understand what the impacts are, and how we can together, with everybody involved, solve these issues.” The next day, during Pan American’ First Quarter 2019 conference call, Kirsten Francescone from Mining Watch Canada was not permitted to ask a question after the meeting was abruptly ended at the 45-minute mark after six other participants were given ample time.

Quelvin Jimenez, the Xinka Parliament’s lawyer, had the following to say about the company’s response: “Pan American Silver clearly insists on continuing to manipulate and intervene in the consultation process with the Xinka People, despite being contrary to international standards. As the Inter-American Commission on Human Rights has stated: “…corporate actors, by definition, are not impartial given their profit motive…” The attitude of Pan American Silver is in open and clear violation of the ‘free’ character of the consultation, which will only increase conflict and put the process at risk. These practices are the same sort of thing that Tahoe Resources did to limit and violate our rights as Indigenous Peoples.” Quelvin has suffered threats, defamation, intimidation, and surveillance for his role in defending the Xinka people’s land and rights.

On the ground in Casillas, the Resistance sent a clear message to Pan American’s stockholders: get out. As Paty, a land defender from Santa Rosa says, “Our stance is that the mine needs to get out of our land because they are not welcome in this place. One of the things that we want is that this Pan American Silver get out of our territory because the mine has destroyed all of our communities, we don’t have water in our communities, the water is contaminated, there are community divisions and that is not okay. We are a peaceful people, a people that loves life and water. We want to breath clean air and we hope that there will still be territory where we can live.”

Another water protector, Adriana, said the same: “As the Peaceful Resistance of Santa Rosa, Jalapa, and Jutiapa, we continue to say no to the mine! We make this announcement as women who are affected in various places, such as water and more than anything in life itself. We hope that it will be understood that mining companies are not welcome in our territory and never will be.” 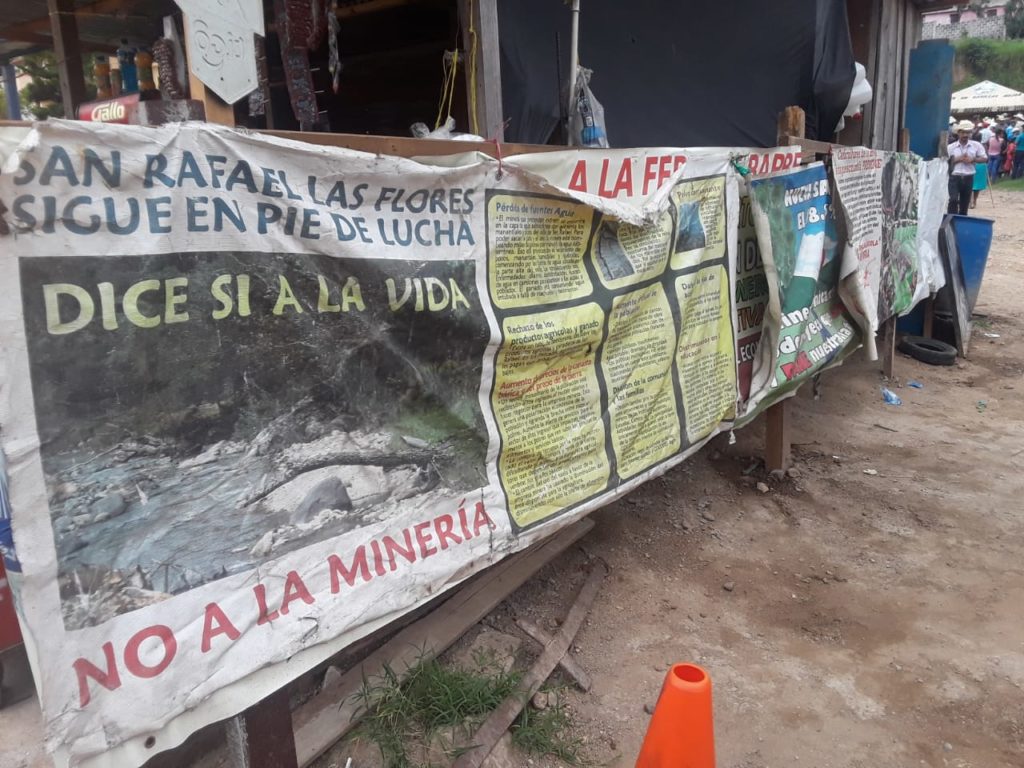 Signs at the resistance encampment in Casillas. 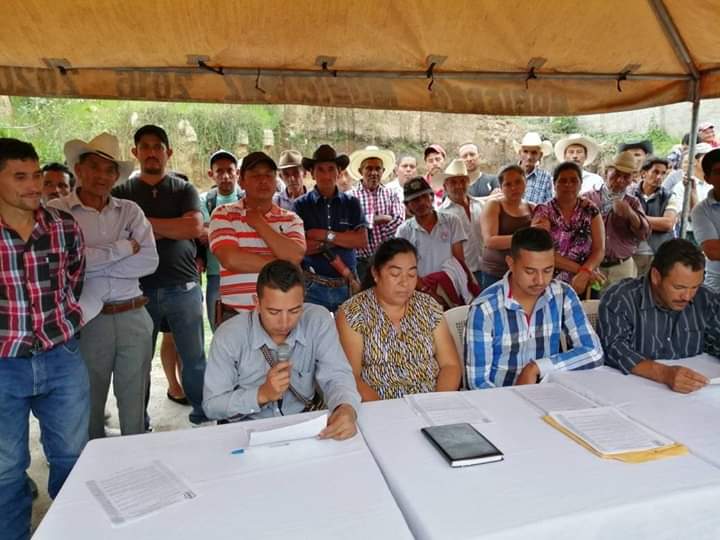 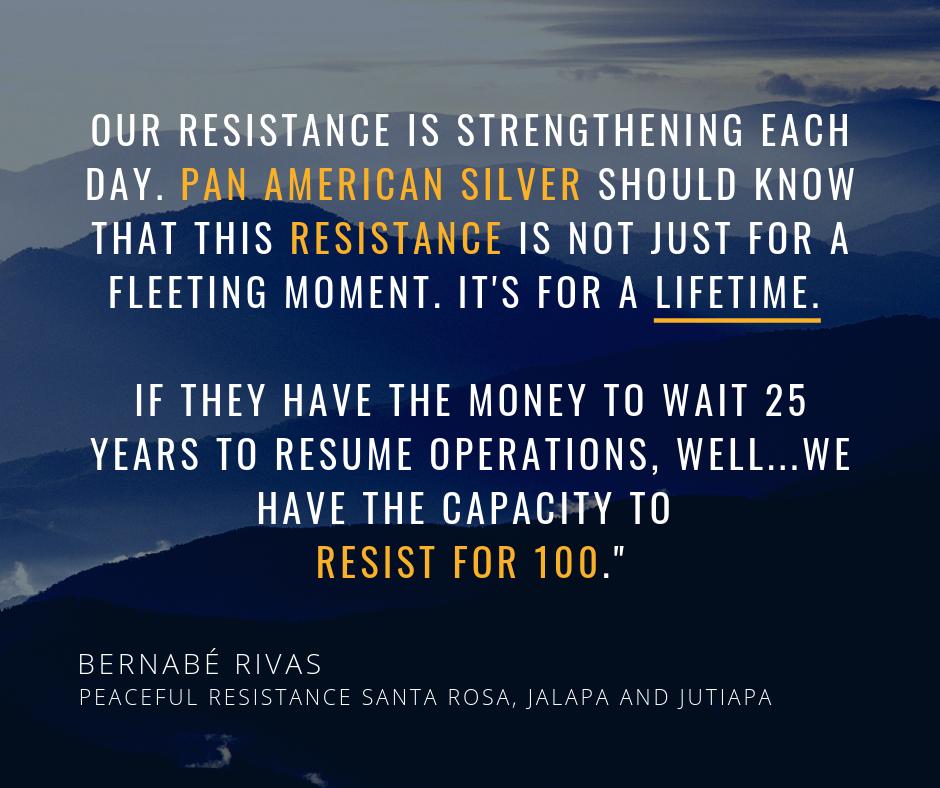 While Pan American chooses to remain complicit in Tahoe Resources’ violent legacy around the Escobal mine, the Peaceful Resistance and the Xinka Parliament remain firm: the Minera San Rafael will never reopen. For now, the Resistance continues to demand that Pan American respect the court-ordered consultation process and desist from all interference. As Luis Fernando Garcia, a survivor of a violent attack in 2013 outside the mine, says: “The Pan American shareholders should know that there exists no social license to operate this project. We will continue in our permanent and dignified resistance as the Xinka people.”

Rabble article: When Pan American Silver bought the Escobal mine, it bought a legacy of violence 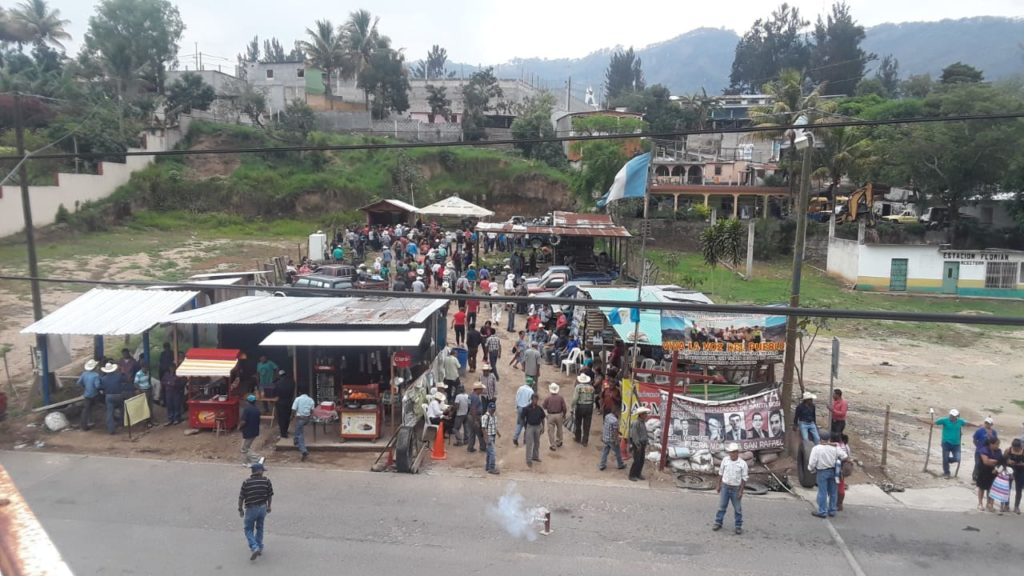 A firecracker to alert the community of the press conference goes off as people gather.