The following article was co-written by the Maritimes-Guatemala Breaking the Silence Network, Earthworks, and NISGUA.

On November 19, 2018, the Xinka Parliament held a press conference to denounce the malicious behaviour of the Ministry of Energy and Mines (MEM), the Ministry of the Environment and Natural Resources (MARN), and Minera San Rafael at the outset of the court-ordered consultation process with the Xinka people. Guatemalan courts suspended the Escobal mine, owned by Tahoe Resources, in July 2017 over failure to consult with Xinka Indigenous people.

In their statement, Xinka leadership demand an end to Minera San Rafael’s ‘misinformation activities,’ which they say are a violation of the court-ordered process, and are aimed at manipulating the outcome of the consultation in their favor. They also denounce the first step in the consultation process, the re-definition of the area of influence, as ‘a mockery’ lacking technical and scientific criteria carried out without their participation.

Read the full translation of today’s press release below. See the Xinka Parliament statement from November 7 for additional information on how Minera San Rafael is bypassing legitimate indigenous leadership in an effort to restart the Escobal mine.

The scope of the area of influence for the project has been a contested issue since the start of the Escobal project. In the initial environmental impact assessment, consultants for Tahoe Resources named just ten towns in the municipality of San Rafael las Flores as communities impacted by the mine’s operations. Residents from the surrounding six municipalities, however, have long argued that the impacts of the Escobal project – one of the world’s largest silver mines – extend well beyond that area.

Tahoe Resources reported the completion of the definition of the new area of influence to shareholders on November 6, while the Xinka Parliament and the general public were not notified until more than a week later, on November 14. 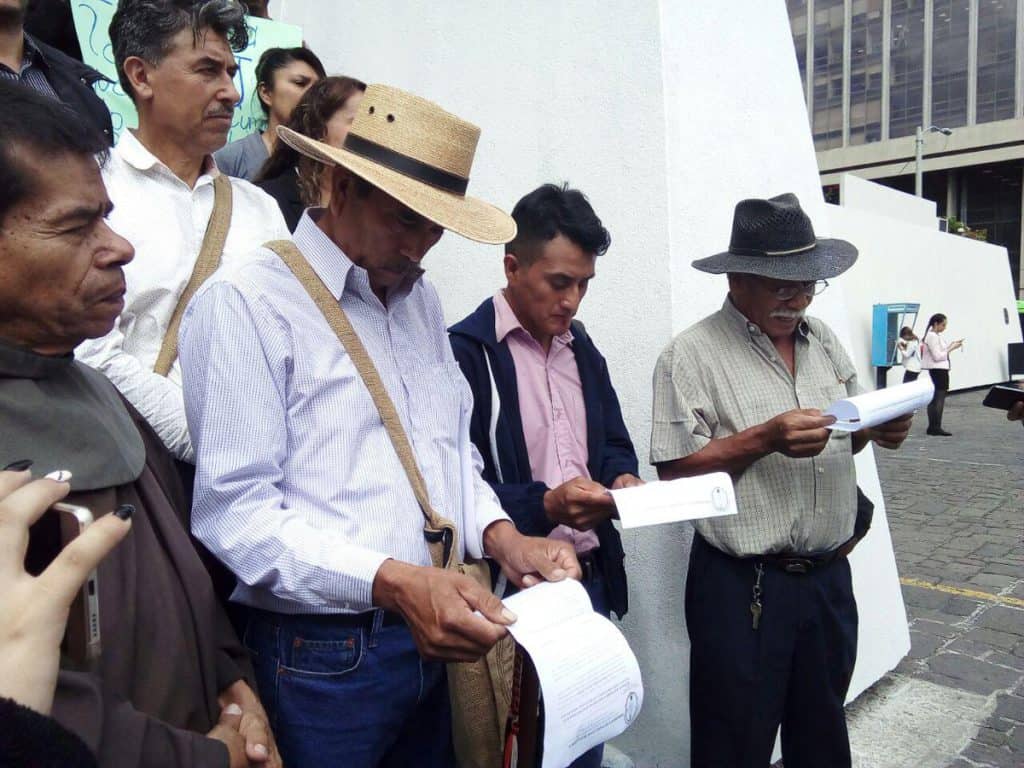 Members of the Xinka Parliament read out a prepared statement to denounce the illegalities of MEM and MARN.

“They are carrying out a pre-consultation process, but the Ministry of the Environment and Natural Resources already defined the area of influence, which is illegal. Article 7 of [International Labour Organization’s] Convention 169 clearly shows that there must be participation by the Xinka People and we didn’t participate in defining the area. As a result, we contest this decision and challenge them to respect the self-determination of the people,” stated Aleisar Arana Morales, President of the Xinka Parliament

In September 2018, the Guatemalan Constitutional Court upheld a lower court decision, confirming that the Xinka People’s rights had been violated when the Ministry of Energy and Mines granted the license for the Escobal mine in 2013 without consulting affected Indigenous people. The September ruling maintained the provisional suspension of the project while the consultation takes place. In addition, indigenous and campesino communities surrounding the project have already successfully stopped operations after erecting a permanent peaceful resistance check-point for mine-related traffic since June 2017.

Statement from the Authorities of the Xinka People regarding the illegal action of the Ministry of Energy and Mines, Ministry of the Environment and Natural Resources and Minera San Rafael

The original statement in Spanish can be found here.

Despite orders from the Supreme Court of Justice and the Constitutional Court, MINERA SAN RAFAEL SOCIEDAD ANÓNIMA, has continued to operate, engaging in clear acts of disobedience of both courts’ rulings. Since June 22, 2017, the date at which it was ordered to suspend operations, [Minera San Rafael] has continued to spread misinformation in order to confuse the population.

In the last few days, the company has increased its misinformation activities regarding the true reach of the consultation in an attempt to make communities believe that the consultation is a formality and during which they will only have the opportunity to say what projects they want, and that, independent of the results of the consultation, [the company] will continue with their [mining] project.

Likewise, we denounce the illegal actions of the Ministry of the Environment and Natural Resources who, making A MOCKERY [of the process], notified us of an illegal resolution approving the area of influence of the ESCOBAL MINE. This resolution was not based in technical or scientific criteria, proving that the only entity [the resolution] seeks to benefit is MINERA SAN RAFAEL SOCIEDAD ANÓNIMA. This resolution completely violates the Constitutional Court orders. In their verdict, [the Court] resolved that denying our participation in the environmental impact studies for the disputed projects, “…renders null and void the environmental impact statement that allowed for the granting of the licenses for the projects in question,”.

As a result, the revision of the area of influence of the ESCOBAL MINING PROJECT is void and should be declared as such by the Supreme Court of Justice, as comptroller of the strict compliance with the Constitutional Court orders.

The Ministry of Energy and Mines, acting in complicity with the Ministry of the Environment and Natural Resources and Minera San Rafael Sociedad Anónima, have initiated a pre-consultation process in clear violation of the Constitutional Court ruling. If they continue with this illegal process, they will be responsible for not upholding the consultation process ordered by the Constitutional Court, as well as other legal consequences that occur as a result. We demand that the Supreme Court of Justice, without delay, outline the appropriate steps required to carry out the Constitutional Court ruling – something we have repeatedly requested – and hold the aforementioned ministries and Minera San Rafael criminally responsible for disobedience.

The authorities of the Xinka People and all of their communities are monitoring the strict fulfillment of the Constitutional Court orders and WE WILL NOT ALLOW OUR RIGHTS TO BE CONTINUALLY VIOLATED.