Original interview posted on CMI-Guatemala and written by Gustavo Illescas. Translated and edited for clarity by NISGUA.

Bernardo López Samayoa talks about the strength of his mother, Priscila Samayoa, and the role that Bernardo Ermitaño López Reyes – better known as Don Taño – has played as his father. Don Taño is facing charges of kidnapping and has been held in preventative prison in Huehuetenango for six months and 20 days.* The crime of kidnapping is not eligible for house arrest and charging community leaders with it is has been an effective way to isolate them from their territory, organizations, and loved ones.

This accusation has widely been used against leaders and other figures who are playing roles mediating conflicts generated by the onslaught of private companies into territories abundant with water, minerals, and oil. The Public Prosecutor’s office is abusing the criminal code when prosecuting community leaders who are refusing access to their lands to the economic elite who are unaware of the basic forms of community organizing through consultations and collective assemblies. 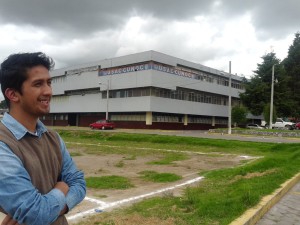 When Bernardo was 17, he began studying medicine at the University of San Carlos with the energetic support of his mother and father, fulfilling a dream he had since he was a boy.

Currently, he is 21 years old and is in his fourth year. At the beginning of 2015, he was doing his residency in internal medicine and surgery in the municipality of Coatepeque, Quetzaltenango. His father was arrested on June 2, 2015 while attending a hearing in Guatemala City for another member of the Barillas resistance movement. With this arrest, Don Taño becomes another political prisoner from Huehuetenango who has been imprisoned for defending his territory in the face of the interests of Hidralia Ecoener and support of

When you found out about your father’s arrest, what were you doing?

At that time, I was stressed out because of the 18-hour shifts we take turns doing as part of our rotation at the hospital. We go in at 8 am and depending on how busy the hospital is, we leave at 1, 2 or 3 in the morning. On June 1, I had my turn and the next day, when they told me, it was terrible. The first thing I thought about was my mother, because anything could happen to her. I later thought about the decision I had made to come study in Quetzaltenango. I made that decision together with my father and relied on his economic support. At that moment, I thought about an infinite number of things. What will I do now to support myself here? What is going to happen to my father? What is going to happen to my mother, who is left to care for my other four brothers and sisters? At that moment, I was very excited to be starting the surgery rotation, but after learning what had happened, I no longer wanted to study. I wanted to return home to provide moral support to my mom. The truth is that I knew this was a possibility, but I never really imagined that it would happen.

Who is your father?

I have the privilege of carrying the last name of Bernardo Ermitaño López Reyes, who is a strong and noble person, who gives up everything to work towards change. He carries this in his heart. If someone needs something, he doesn’t think twice about getting involved, he just helps. He is someone who is committed to his family, his children. He is the most honorable person that I have known in my life. He is passionate about agriculture. He has always said that first, you must fear God. Then, love thy neighbor, and that everything we achieve we have to achieve by our own strength.

What role has your mother played in all of this?

My mother has been my father’s right hand. I consider my mother to be a very strategic person and my dad takes into account what she thinks. She is a person who gets straight to the point. If something is wrong, you have to take action. My mother is a retired teacher and is a strong woman, particularly in light of my father’s imprisonment. Caring for five children isn’t easy. She’s our only pillar of support to get ahead, right now. It has been difficult for her but she’s strong.

Before being arrested, your father began a new phase of his life by becoming involved and running as mayor for the CRD. What do you think about the political decision he made to participate in the elections? What implications did it have?

He is an educated person, a teacher, and later, dedicated his life to agriculture. He has good ideas, a good heart, and fulfills the requirements outlined in the law. So why shouldn’t he have a position in public office? If he is qualified and he has shown himself capable, someone who has brilliant ideas, why wouldn’t he run? I support him on this. It wasn’t just him who decided to run. It was the community – a big group of people who supported him decided to put forward his name as mayor. People were happy, thinking that he was going to win and that he would really make a change for development for Barillas. In effect, I think that the people behind all of this carried out the arrest warrant to prevent him from becoming mayor. I think that if he had become mayor, he would have made it impossible for them to carry out this project.

Has your perception of the justice system changed after your father’s arrest?

Justice is not applied how it should be. After this happened and after all that has happened in the country – such as was the case with “La Línea” – I thought about how rotten this system is. My father’s arrest just made me more disappointed in the justice system.

Did you want to say anything else?

An important message would be that the entities who criminalize us are embedded with organized crime in the country. This message goes out to all of the families of the political prisoners and for the resistance movements. Like my father has already expressed, we have to become united in northern Huehuetenango, also with La Puya and other areas of resistance. We need to become united and create stronger links to be able to overcome this. The other side is becoming stronger and we also need to become stronger. Each political prisoner is fighting his own legal battle, but if we live out the saying “united we are stronger,” we can overcome.

*At the time of this translation, Don Taño has spent 7 months and 10 days in prison.