We celebrate the release yesterday of Saúl Méndez and Rogelio Velásquez, two community leaders wrongly convicted of homicide in a 2014 trial plagued with irregularities. Saúl and Rogelio were sentenced to 33 years in prison, despite major holes in the prosecution’s evidence linking them to the murder.

After winning a special appeal and going through a retrial in Quetzaltenango last year, both were absolved of all charges in October. Since then, they have remained in prison awaiting a possible appeal by the prosecution. No appeal means that now, after more than two years, they can finally go home. 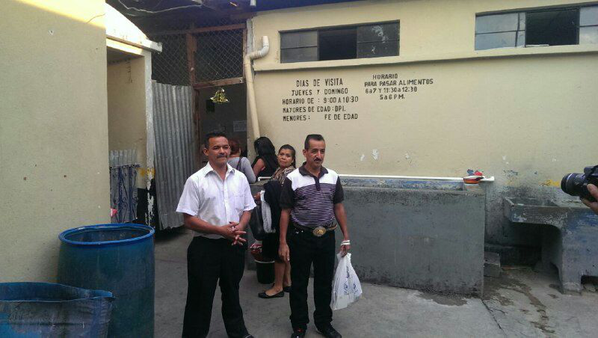 Saúl and Rogelio walking out of prison. Photo: CMI-Guat

The trumped-up charges against Saúl and Rogelio represent a pattern of criminalization against community leaders in places opposing megadevelopment projects, such as mining and hydroelectric dams. Such is the case in Barillas, home to Saúl and Rogelio, where strong community resistance to a Spanish-owned hydroelectric project has been present since 2007. This strong opposition is based on the lack of consultation with communities who believe the dam will have negative ecological impacts and will open the door to other larger projects in the area. For their opposition, leaders have faced criminalization, attacks, and at different moments, have seen their communities remilitarized.

We celebrate together with other human rights organizations who have stood by Saúl and Rogelio and other community leaders facing similar circumstances across Guatemala. We admire the strength and the dignity both men have carried throughout the wrongful conviction and more than two years in prison. We stand with the familes who have felt the emotional and economic impact of Saúl and Rogelio’s forced absence and wish them nothing but peace now that they can be together.

Thank you NISGUA supporters who wrote to the U.S. Embassy in Guatemala, denouncing the serious irregularities in the first trial that convicted the two men and who wrote messages of solidarity to them while they were in prison.

We also know that this struggle is far from over. Today is the next hearing in the case against Adalberto Villatoro, Arturo Pablo and Francisco Juan, three other leaders from Barillas who have also been criminalized. Rigoberto Juárez, Domingo Baltazar and Hermitaño López are also currently in preventative prison facing similar charges and will have hearings next week.

As we celebrate the release of Saúl and Rogelio, we don’t forget the others who remain in prison, having been targeted for playing an important role in the struggle for land and community self-determination.

In a letter written by Mónica Castañeda to her husband, Arturo Pablo, she writes: “You have taught people to rise up to defend their rights, to not let ourselves be manipulated. This is the price for standing up for our people, for the future of our family – you are in prison not because you are a criminal, but because you defend life, nature, and our territory. Your children miss you. They believe in you. They know that you are a good man…We will always be here, waiting for you with arms wide open for the day that you come home.”

NISGUA continues to accompany the men who have been imprisoned. Follow @NISGUA_Guate on twitter for updated coverage of the trials.