Statement: WE REGRET THE RESIGNATION OF JUDGE MIGUEL ÁNGEL GÁLVEZ

On November 15, Judge Galvez announced  his resignation as a High-risk Court Judge and made public that he left the country due to defamation, intimidation, harassment, security threats and lack of access to a due process.

The threats against Judge Miguel Angel Galvez increased dramatically after he ordered the opening of the trial for the first nine military and retired policemen accused in the “Military Diary” case on May 6 of this year.  He was later denounced by an extreme right-wing group and their state allies using the same strategy that has led other justice operators into exile. Impunity leaves grassroots human rights defenders increasingly vulnerable.

WE REGRET THE RESIGNATION OF JUDGE MIGUEL ÁNGEL GÁLVEZ

Judge Miguel Ángel Gálvez’s resignation is a shame for the justice system in Guatemala. Far from protecting those who have upheld the rule of law, the Supreme Court of Justice (CSJ) has been a shield of corruption and impunity.

Judge Gálvez, as well as Judge Éricka Aifán, repeatedly reported on the situations of risk they faced. The Supreme Court of Justice (CSJ) not only ignored such calls, but also facilitated the criminalization, defamation, and harassment of those who have been subjected to it, and protected their aggressors.

The justice system loses a valuable, honest, capable official dedicated to strengthening the rule of law.

From the Convergence for Human Rights, we regret the resignation of Judge Gálvez and we send him our solidarity and gratitude for his impeccable work.

We call on Guatemalan society to raise its voice, promote the organization, alliances and mobilization necessary to recover the rights that today are violated by those from the #CriminalAlliance who have assaulted democracy. 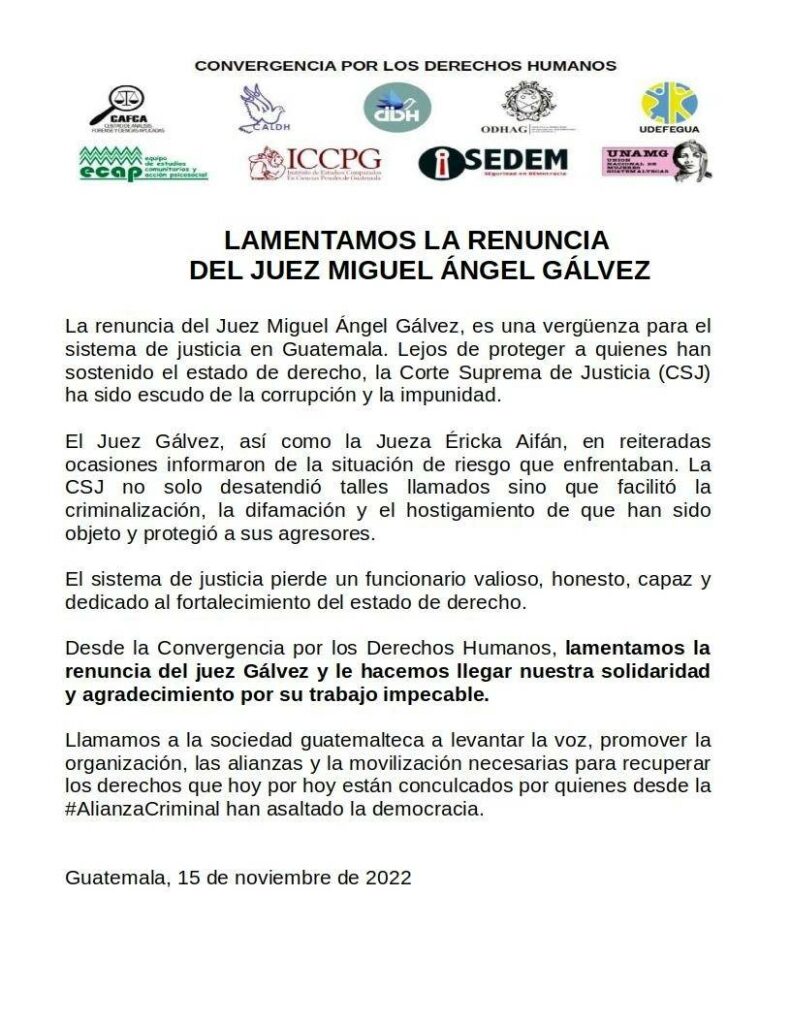