Statement:22 years honoring the memory of the victims and survivors of the Internal Armed Conflict 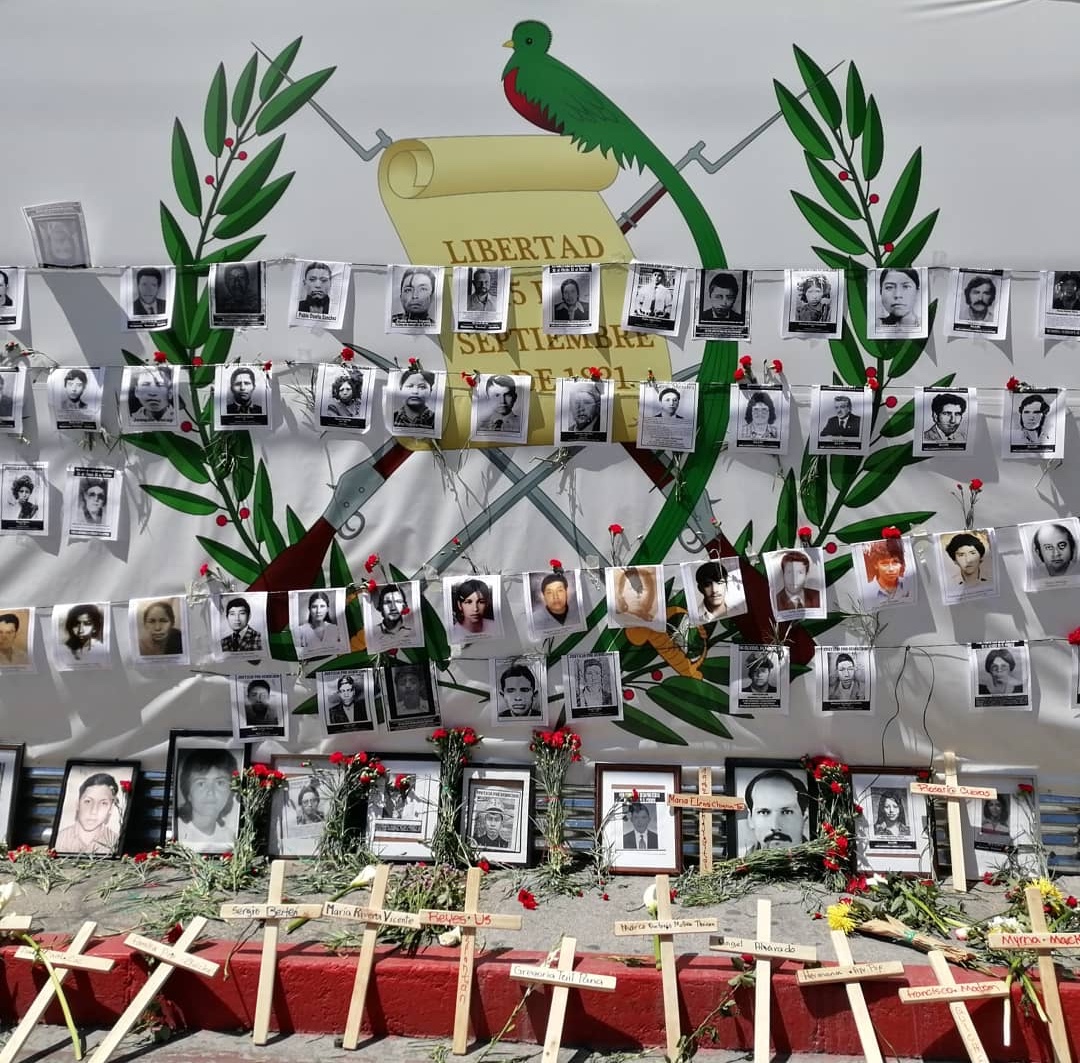 Guatemalan authorities put a giant poster with national symbols outside the Congress. Social organizations covered it with pictures of the disappeared and victims of the Internal Armed Conflict during the February 25 commemoration. Photo credit: Edith López Ovalle

February 25th marks the 22st anniversary of the release of the UN-sponsored Historical Clarification Commission Report for Truth and Reconciliation known as “Guatemala: Memory of Silence“. The day is commemorated as the National Day of Dignification for Victims of the Internal Armed Conflict.

This year, the commemoration occurs at a critical moment, not only because of the COVID-19 pandemic: survivors, relatives of victims, and social organizations continue to await a response from the Constitutional Court to Giammatei’s attempt to close key Peace Institutions. Moreover several transitional justice cases remain paralyzed in the judicial system and the elections of magistrates for the Constitutional Court was plagued by candidates with ties to the military and corruption cases.

We are always honored to stand with survivors, victims, and their families to demand justice and accountability for the violence committed by state forces and we share the following statement from the Genocide Never Again Coalition.

Today marks the 22nd anniversary of the presentation of Guatemala, Memory of Silence, a report from the Historical Clarification Commission (CEH), which collected the testimonies of survivors of the Internal Armed Conflict in Guatemala (IAC).

We honor and remember all of the victims who died, as well as the survivors of the horrible actions committed mostly by Guatemalan state security forces, the National Police, the Army, the Civil Self-Defense Patrols and the Military Commissioners. Actions that, due to their severity and damage to humanity, were considered by the CEH as acts of genocide.

We commemorate the enormous strength and dignity of those who survived despite the terror, racism and extreme hatred they were exposed to.

It was thanks to them that concrete actions were taken and the institutions of peace were created in order to address the persistent effects and consequences of the war in their communities. Thanks to the survivors, we have set an example for the world by recovering the individual and collective memory of terror and people’s resistance to genocide; by bringing to trial and obtaining sentences against the high military commanders who ordered the massacres, rapes, torture, disappearances, burning and looting; by recovering the remains of thousands of disappeared people from clandestine cemeteries and bringing them to their families for a dignified burial; by finding and protecting historical files that tell of political repression and the actions of the armed forces; by searching for children kidnapped by army officers and reuniting them with their surviving relatives to rebuild their history and identity.

Opposing the survivors and the people, the Guatemalan State, with its different governments under the same power, has been in charge of hindering this path, denying the genocide, delaying the justice processes, hindering access to military archives, praising a repressive and criminal army, and destroying and disrupting peace institutions such as the Secretary of Peace, the National Compensation Program, and the Presidential Commission on Human Rights by creating a new institution that is still unclear on how it will provide continuity for these processes from the former institutions.

For this reason, 22 years after the delivery of the CEH report, relatives, organizations of victims and survivors, and accompanying organizations remember all of the people massacred, disappeared, and tortured during the Internal Armed Conflict, so that these atrocities never happen again.

We demand  that the State of Guatemala:

FOR THE MEMORY, JUSTICE, AND DIGNITY OF THOSE WHO ARE NO LONGER WITH US AND FOR THE SURVIVORS OF THAT BARBARISM, WE CONTINUE TO DEMAND JUSTICE AND DIGNIFIED REPARATION 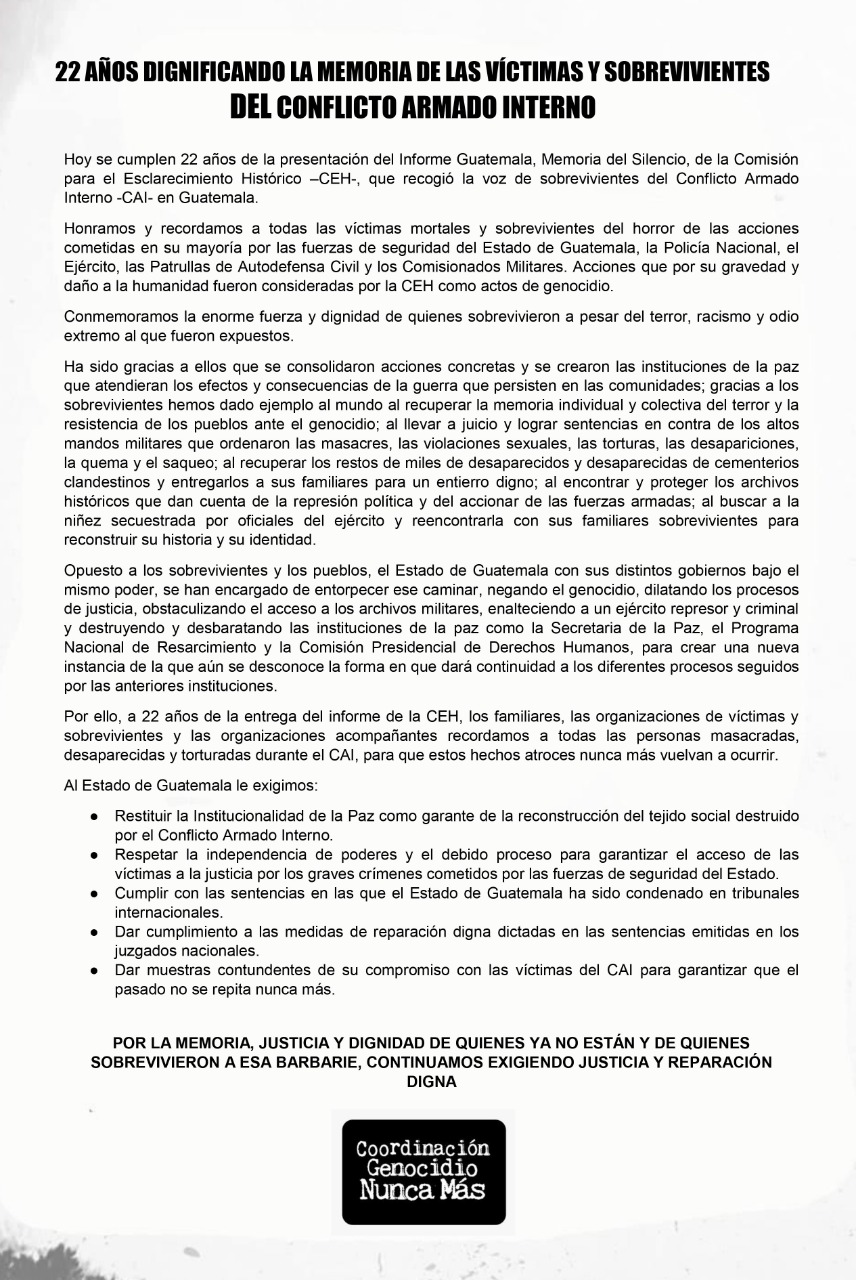