Original article posted in Spanish on Prensa Comunitaria with information provided from his family. Translation by NISGUA.

Rigoberto Juárez is a representative of the Plurinational Government of the Q’anjob’al, Chuj, Akateka, Popti and Mestiza nations, a governing body present in 16 municipalities in Huehuetenango. He has been criminalized by the State of Guatemala and transnational companies for defending territory and water.

Rigoberto Juárez Mateo has dedicated his life to serving communities, especially the indigenous peoples of Guatemala, and has held a variety of governing positions where he has fought for the rights of the Maya peoples. When he was 17 years old, he worked at the municipal hydroelectric dam that was operating in Santa Eulalia and then left to study to become a rural health worker in the department of Izabal. Graduating in 1978, he worked in rural health in the neighboring municipality of San Mateo Ixtatán until serious repression from the army forced him to leave for Mexico in 1980. From there, he became involved in the clandestine radio “Voz Popular,” that was transmitting from the folds of the Tajamulco volcano. He worked in community radio until the Peace Accords were signed in 1996. 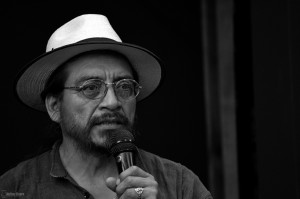 Returning to Guatemala, he dedicated his life to the defense of the rights of indigenous peoples. He was the communications coordinator for the Commission in the Defense and Promotion of the Rights of the Maya Wuqub’N’oj people. Later, he became the general coordinator of COPMAGUA (MUJB’AB’L YOL) and member of the Guatemala National Council of Indigenous Development.  He was also the secretary of the Board of Directors of the Academy of Maya Languages of Guatemala and the Administrative and Financial Director of the same institution.

All of this work kept him connected with his homeland. He was the first president of the Q’anjob’al Linguistic Community, headquartered in Santa Eulalia. In 1999, together with Daniel Pedro Mateo, Domingo Baltazar and other community leaders, he founded the community radio station Snuq’ Jolom Konob’ to preserve the Q’anjob’al culture and maintain communication between all of the Q’anjob’al people in northern Huehuetenango and those living in Mexico and the United States. He has since continued to carry out community radio work, until the radio was censored in 2015 for informing the public about the presence of megaprojects in the region.

In 2006, Rigoberto Juárez helped organize a community consultation in which the Q’anjob’al people of Santa Eulalia overwhelmingly rejected the presence of mining companies and other extractive industries in their territory. Later, Rigoberto played a role in the creation of the Paqt’un, the Q’anjob’al Parliament, made up of the municipal authorities from northern Huehuetenango.

Since 2011, Rigoberto has travelled on various occasions to Guatemala City to denounce the abuses committed by hydroelectric companies throughout the Q’anjob’al territory. In the case of Santa Eulalia, the company CINCO M – Hidro San Luis is present and according to community leaders, the rights of the communities in opposition to the hydroelectric project are being threatened by the company. This is in addition to the threats posed by Ecoener Hidralia Energía – Hidro Santa Cruz in Barillas and the Proyectos de Desarrollo Hídricos S.A. PDHSA poses with its Pojom project in San Mateo Ixtatán.

In September 2013, Rigoberto Juárez, in his role as a Q’anjob’al ancestral authority, formed part of the commission that established the first dialogue table with former President Otto Pérez Molina, Minister of the Interior Mauricio López Bonilla, and the Minister of Defense and Minister of the Environment. At this roundtable, agreements were reached with regards to military and police presence in the area without coordination with community authorities. Months later, these agreements were not respected by the government, leading to the arrest of men and women leaders. The organizing processes carried out at the time by people from northern Huehuetenango led to the creation of the Plurinational Government of the Q’anjob’al, Chuj, Akateka, Popti and Mestiza peoples.

On March 24, 2015, Rigoberto Juárez and Domingo Baltazar – another community leader from Santa Eulalia – were forcibly and arbitrarily detained by the police as they were leaving the office of a human rights organization.

Rigoberto Juárez has spent a year in prison and is a political prisoner of the State of Guatemala.