Open letter from civil society organizations from the Ixil region

The following is a statement released by Ixil human rights organizations in light of the decision to move the genocide retrial to Nebaj for three days this week. This is the first time the Court for High-Risk Crimes is moving the closed-door trial to Ixil territory, to hear from elderly witnesses who can no longer travel to the capital to testify against former dictator Efraín Ríos Montt and his former head of military intelligence José Mauricio Rodríguez Sánchez. NISGUA has accompanied the plaintiffs in the case – the  Association for Justice and Reconciliation (AJR) and the Center for Human Rights Legal Action (CALDH) – since 2000. For the original statement in Spanish, see below. Photo credit: La Masa

From civil society organizations from the Ixil region to the survivors of the internal armed conflict:

In 2013, Guatemala’s High-Risk Crimes Court “A” heard the Ixil genocide case, where General Efraín Ríos Montt and his former head of military intelligence José Mauricio Rodríguez Sánchez were tried for the murder of 1771 people, including men, women, and children. The trial ended in a conviction of the former General on May 10, 2013.

What followed was a ruling made by three judges of the Constitutional Court that annulled part of the trial, but this did not mean that genocide did not occur in the region. The courts started the process again at the beginning of this year, deciding to hear once more from the men and women witnesses in the case, which is why we are continuing with the trial today.

On April 19, 20, and 21, the High-Risk Crimes Court “B” will transfer the genocide case to Nebaj to listen to the voices of survivors of scorched earth policies enacted between 1982 and 1983, when the majority of the massacres and violent acts against the Maya Ixil people took place in this region. We don’t forget the massacres documented by the REMHI report that corresponds to the department of Quiché, where more than 200 massacres took place against the civilian population. According to the report, more than 90 massacres alone were registered in the three municipalities of Santa María Nebaj, San Gaspar Chajul, and San Juan Cotzal between 1981 and 1983.

Mass murder is always associated with an attempt to destroy the community. Despite all of the persecution suffered by the Ixil people and the Maya people in general, no one could destroy nor erase our culture. Over the course of many years, we survived defending life. We are the seeds and will continue to live fighting for life and for our rights. We recognize this as an historic moment – the presence of the High-Risk Crimes Court in the Ixil region as a sign of respect towards the most elderly and/or sick witnesses who will give testimony over the course of the next three days.

Furthermore, this event allows the public – particularly the men and women survivors of the internal armed conflict – to participate in this emblematic moment for the region and the county, while accompanying the witnesses throughout this process and raising awareness with the youth about the importance of historic memory.

This is an opportunity for the Ixil people to be heard before a tribunal in the same municipality in which thousands of people lost their lives or suffered forced disappearances, torture, forced displacement, and the forced relocation and concentration of communities in “model villages.” The methods of enacting terror in communities affected women in particular ways, by using sexual violence, torture and sexual slavery as a military strategy. Pregnant women were killed alongside girls, adolescents, and elderly women.

We know what it means for the men and women witnesses and survivors to remember what happened and testify again to everything they have lived through and suffered during the internal armed conflict. This is why we are carrying out different cultural and artistic activities as individuals and organizations in accompaniment of the families of survivors. It is also why we are inviting the general public to attend peaceful gatherings that will be held in front of the Pubic Prosecutor’s office in Nebaj on April 19, 20 and 21 from 8 am, alongside the trial.

We are all carrying out these activities together in a way to bring dignity and remember each one of our loved ones who were victims of genocide and who we carry with us always. Our accompaniment presence is important to give strength to the families of witnesses, so they don’t feel alone. Because we, too, are children, grandchildren, survivors of genocide and for this reason, we demand justice for the crimes committed. 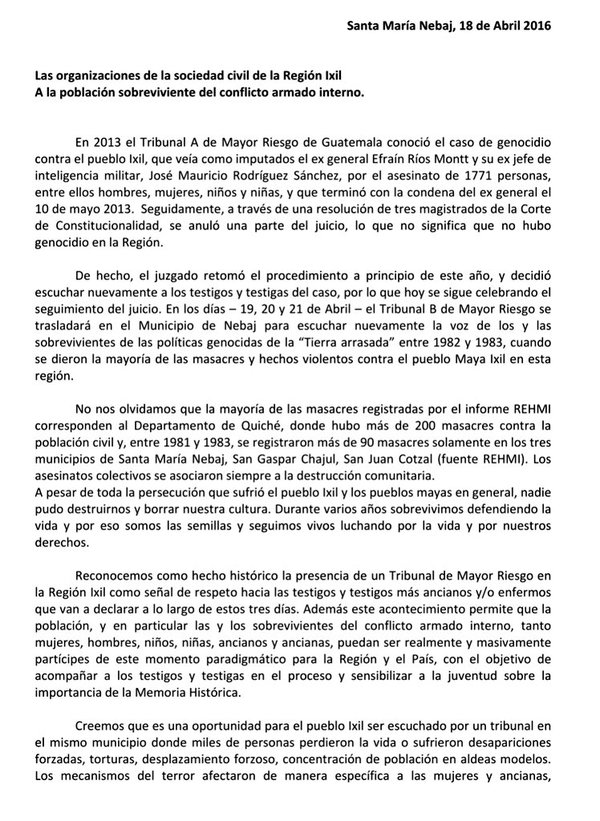 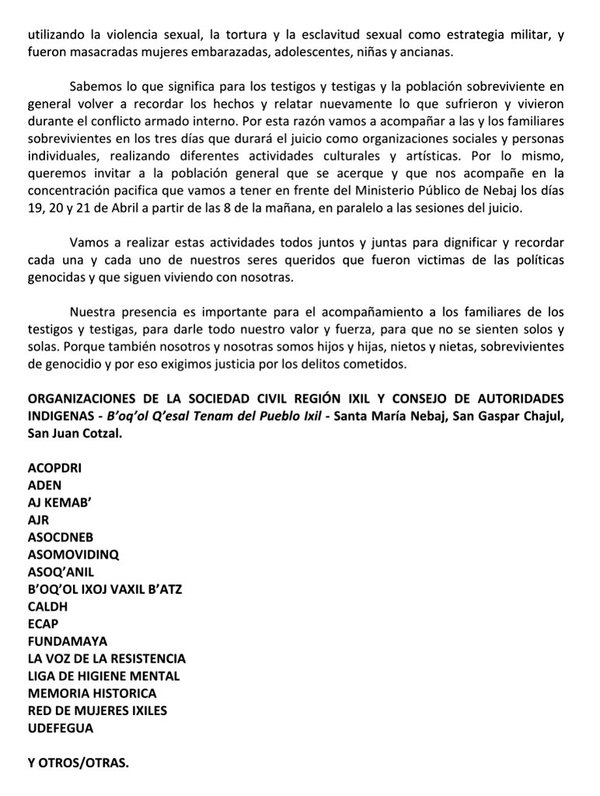