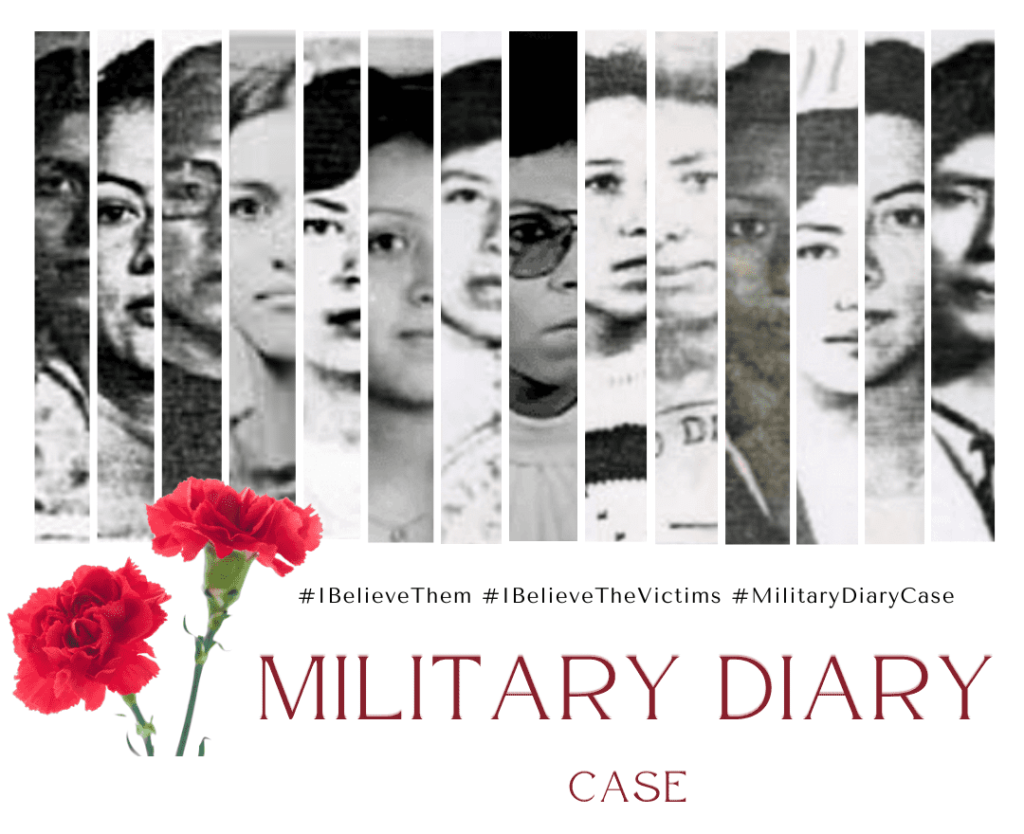 The Military Diary is a document that lists the names of 195 people, including children, who were captured and forcibly disappeared between 1983 and 1985 during the dictatorship of Óscar Humberto Mejía Víctores. The Military Diary also lays out systematic human rights abuses committed by the state, including surveillance, illegal detentions, torture, sexual violence, and extra-judicial killings. It also provides evidence of the the clandestine and illegal structures of intelligence which carried out state terrorism in Guatemala against civilians who were considered “internal enemies” within the state’s strategy of counter-insurgency (1).

In 1999, the document was anonymously withdrawn from the Guatemalan Military Archives and handed over to National Security Archives researcher Kate Doyle. Alongside each victim’s name is their picture, details of their disappearance, including the date and location of their kidnapping by state security forces, and other personal information (2).

The details outlined in the Military Diary have been corroborated by testimonies from both survivors and relatives of the victims. The family members have been demanding justice ever since their loved ones were illegally detained.

In 2012, the Inter-American Court for Human Rights (IACHR) ruled that the Guatemalan state was responsible for crimes associated with the Military Diary and ordered the state to determine who committed them, locate the victims’ remains, provide psychological support to families, and provide reparations. In spite of this, the national investigation of the case stalled for years (3).

1. “Most – but not all – of the victims listed in the Death Squad Diary were politically organized, members of student movements, union leaders, writers, and other dissidents. Some were just children.” The National Security Archive, National Security Archive Electronic Briefing Book No. 363, “Remains of two of Guatemala’s  Death Squad diary victims found in Mass grave”, November 2011. https://nsarchive2.gwu.edu/NSAEBB/NSAEBB363/index.htm

2.In most cases, they were held for weeks and then killed. So far, the remains of 8 of the Diario Militar victims have been identified, 6 were found in clandestine graves near Guatemala City. Sandra Cuffe, Al Jazeera, “‘Huge step’: Relatives of Guatemala disappeared hope for justice”, June 2021. https://www.aljazeera.com/news/2021/6/13/guatemala-relatives-of-civil-war-disappeared-hopeful-for-justice

The Military Diary Case Goes to Trial in Guatemala

In a groundbreaking step forward for the case, on May 27, 2021 twelve former military and police officers involved were arrested. A year later, On May 6, 2022, Judge Miguel Angel Galvez ordered the opening of the trial for the first nine (4) accused. He determined that given the testimonies of survivors and relatives of the victims, the military documents, declassified documents from the US government, and other evidence (5), there are sufficient grounds to assume their responsibility in the events.

The accused will face charges for illegal detention, torture, forced disappearance, murder, extra-judicial execution, sexual violence, and crimes against humanity of at least 195 people between 1983 and 1985. Additionally, the accused (6) have many links to right-wing organizations, private security companies, and corrupt actors, showing clearly that there is a connection between the clandestine criminal structures that operated during the Internal Armed Conflict and the structures that maintain corruption and impunity in the present.

Shortly after his ruling, Judge Galvez (7) was threatened and later denounced by an extreme right-wing group “using the same strategy that has led other justice operators into exile… [additionally], the Supreme Court of Justice announced that it had filed a petition to revoke Gálvez’s judicial immunity, which is often a prelude to arrest (8).”

5. Overall the Military Diary case now has over 7,200 means of evidence, 25 expert reports and more than 100 witnesses, 30 of whom are currently in exile according to the plaintiffs in this case.

6. The latest fugitive to be captured was Toribio Acevedo Ramírez. He was arrested on May 10, 2022 in Panama fleeing to Europe. He was sent to trial on May 23. As of this writing, 3 suspects remain as fugitives.

8. Jeff Abbott,  Kate Linthicum,  Los Angeles Times, “He’s one of Guatemala’s last independent judges. Will he be forced to flee too?”, June 17, 2022, https://www.latimes.com/world-nation/story/2022-06-17/after-sending-soldiers-to-trial-for-civil-war-atrocities-a-guatemalan-judge-faces-threats