“Justice for genocide: A survivor’s story” visits the Midwest

“We are here in the United States asking for your solidarity. Borders divide us, but justice is a fundamental pillar of democracy” -Anselmo Roldán to the international community 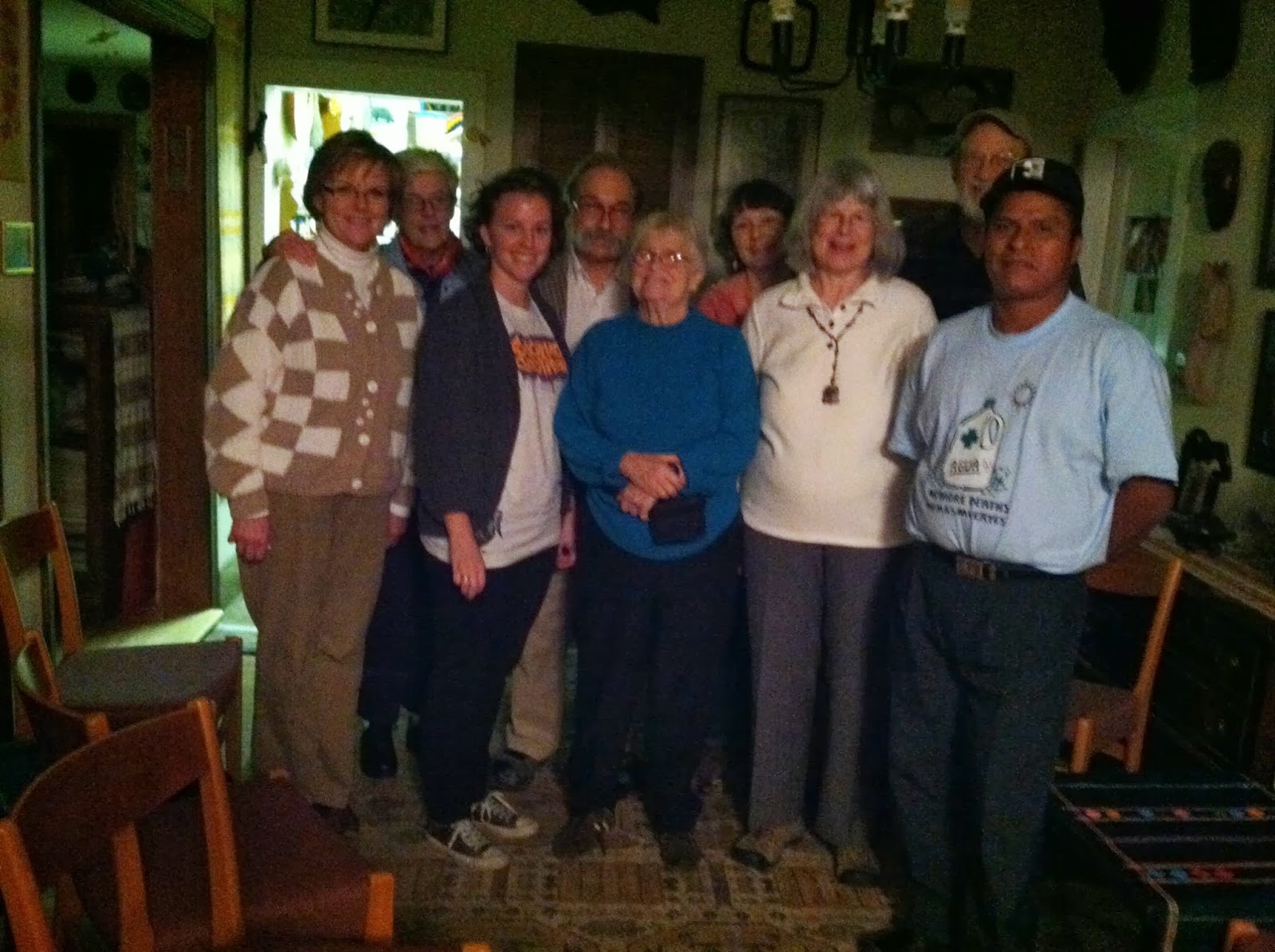 Similar to other sponsoring communities who are connected to NISGUA’s Guatemalan Accompaniment Project (G.A.P.), SEPA’s direct support to G.A.P. is a concrete example of their solidarity with our partners, the AJR. SEPA was proud to host Anselmo and continue supporting the movement for justice in Guatemala.

Members of SEPA and other attendees at our Oberlin College presentations joined our postcard campaign, sharing why the genocide sentence is important to them. Some highlights from their messages include:

It is vital to give truth and validity to the voices of people that experienced genocide and make sure the law is upheld.

I feel deeply the loss of your loved ones and I want to help you remember them in the strongest way – to let the truth be known.

I believe in the people of Guatemala.

I believe in supporting the truth!  Thank you for your courage and dedication to justice.

It is important that people can live where they have the right to live, and speak their language, and love their families and support themselves without fear. 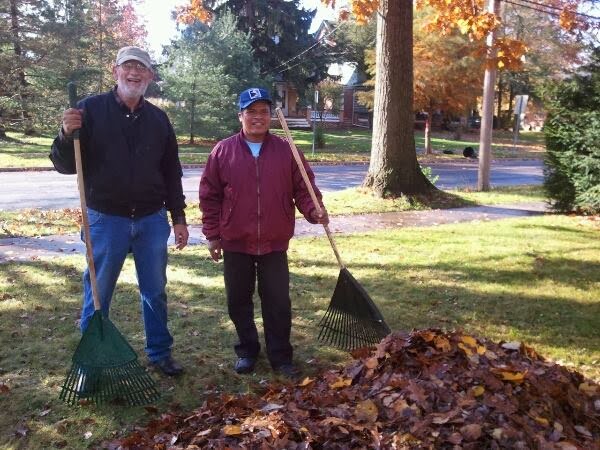 In addition, Anselmo was able to rest a bit and enjoy a true U.S. Fall while in Oberlin. He happily pitched in raking fallen leaves with SEPA member John Gates! 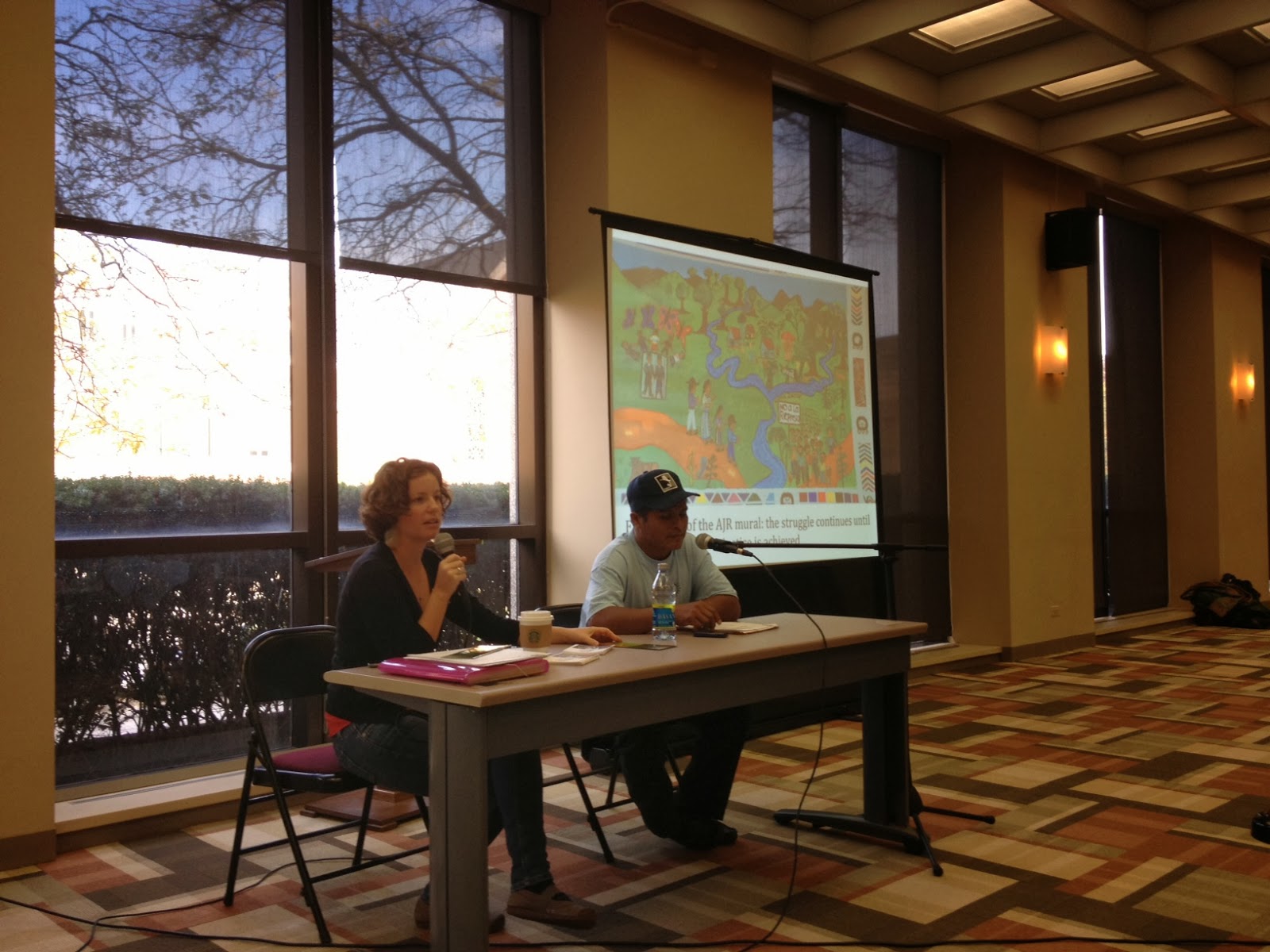 From Oberlin, Anselmo and NISGUA staffer Ellen Moore headed west to Chicago for three exciting presentations! A Loyola University faculty member hosted two presentations with Anselm, where he spoke to over 80 students who attended from three different universities across Chicago. The students, some hearing about the Guatemalan genocide for the first time, sent powerful messages of support back to Guatemala for the AJR:

The calculated, systematic murder of a group of people by their government, which it is supposed to protect and serve, is the greatest crimes imaginable. I support your cause and believe in justice.

The injustice cannot be silenced anymore

I support a world community committed to bringing all crimes against humanity to justice.

Genocide is a tragedy and justice is a basic human rights. 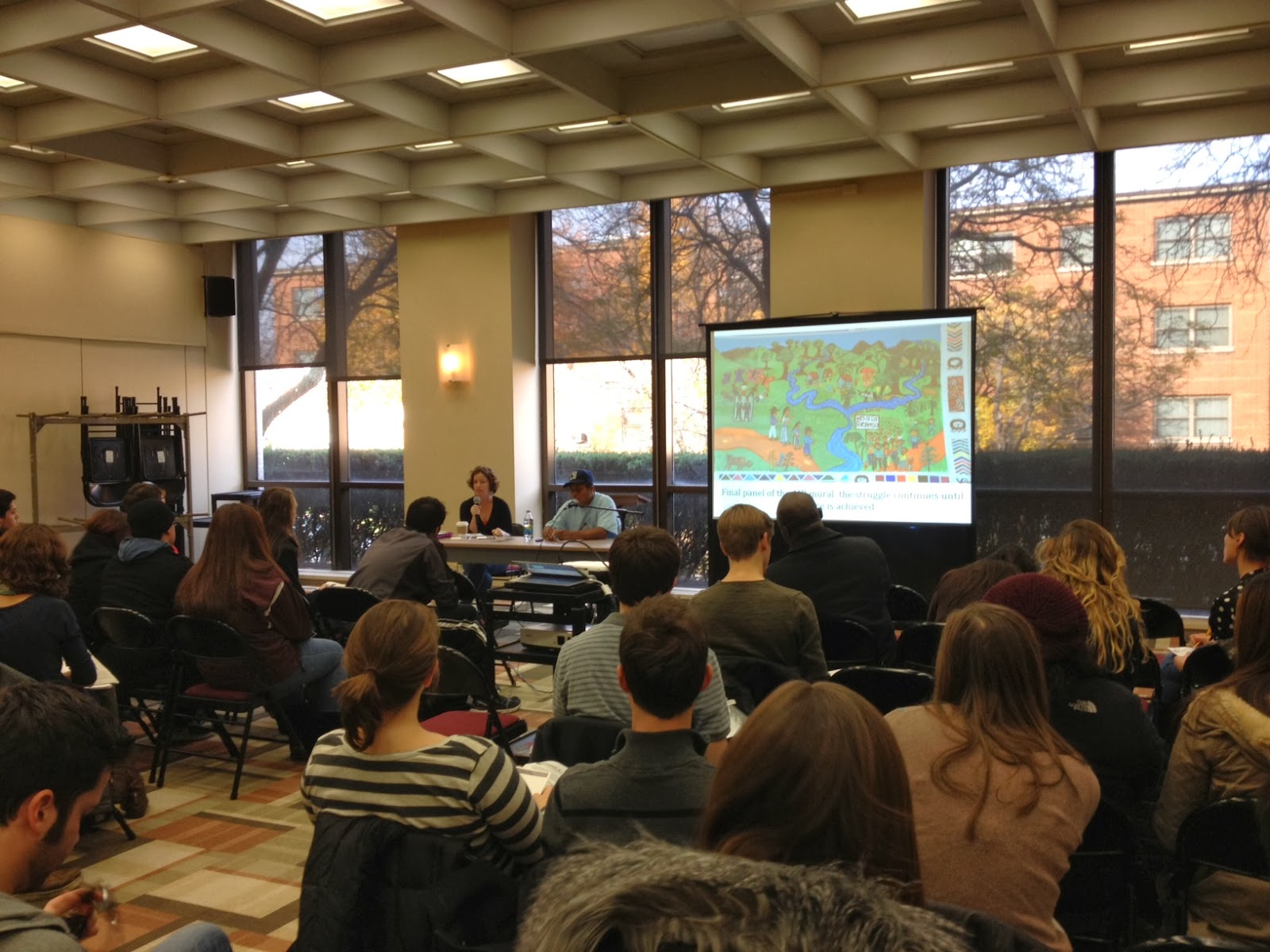 We rounded out our Chicago visit with an evening community event at the University Church Chicago. The Guatemala Partnership, based at University Church, graciously hosted a dinner for Anselmo followed by a public presentation. Anselmo spoke before a packed room, sharing his story as a genocide survivor and human rights defender. University Church is deeply connected to the struggle for justice. The Church was a sanctuary church during the 1980s, providing crucial support for Guatemalans fleeing the internal armed conflict. The Church’s commitment to peace, justice and solidarity continues:

It represents a historic and brave decision for justice and truth and is an example and beacon of hope for the world that those who commit atrocities will be brought to justice.

Until my teacher spent class time to discuss what happened, I was unaware of the genocide. I am amazed by the AJR’s strength. I want to support the people that have suffered so much.

Innocent people were killed and the guilty are free. There should be justice for genocide and crimes against humanity.

No one has the right to take someone else’s life.

It is just – and there can be no peace without justice. Dear people of Guatemala, I hold you in my heart. 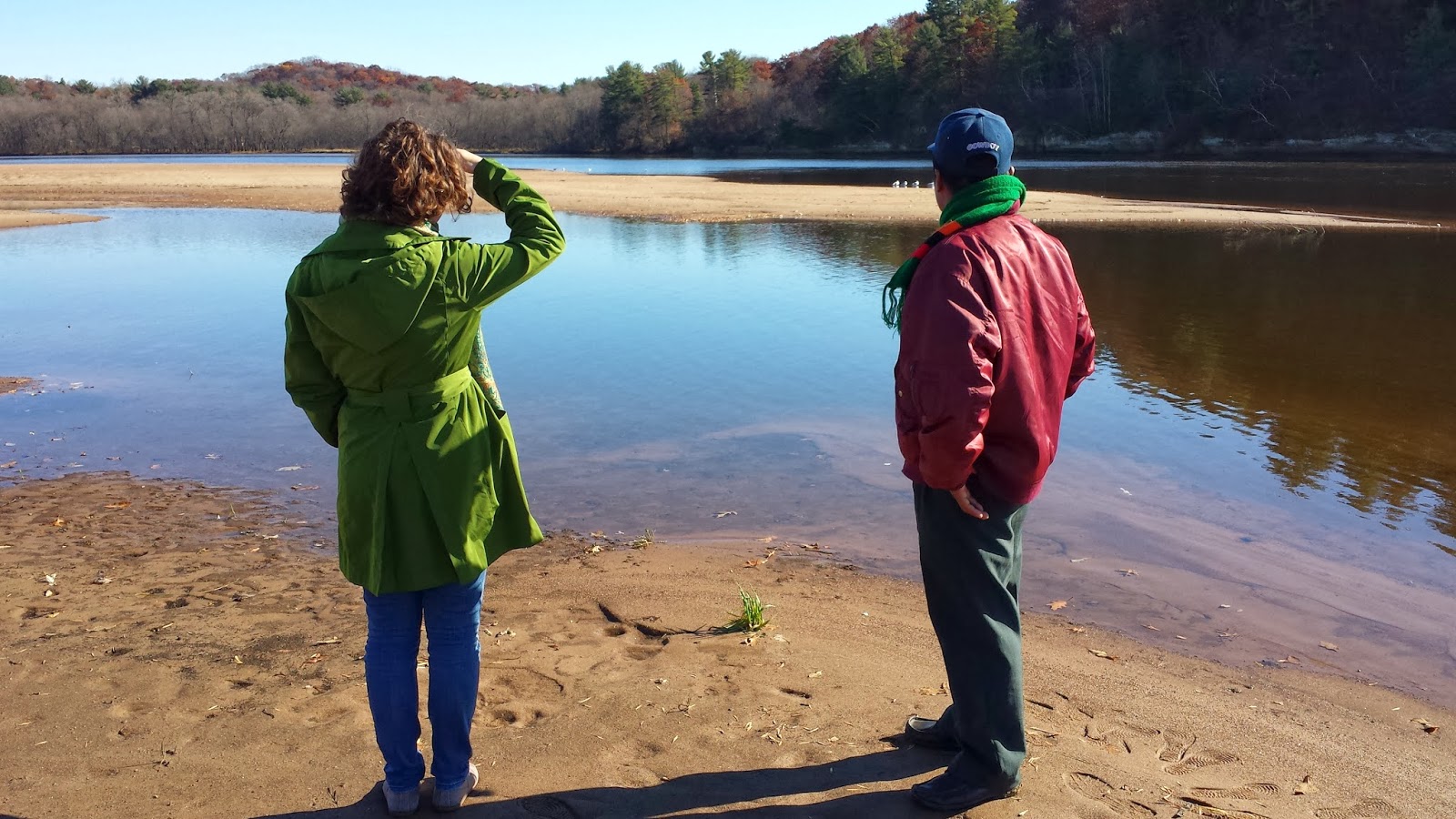 Finally, Ellen and Anselmo headed to Wisconsin to join NISGUA board president Melinda Van Slyke for three days of events in southern Wisconsin. Committed groups of NISGUA supporters attended community events in both Madison and Spring Green. During downtime, Anselmo and Ellen  enjoyed the natural beauty of a handful of Wisconsin’s many lakes. 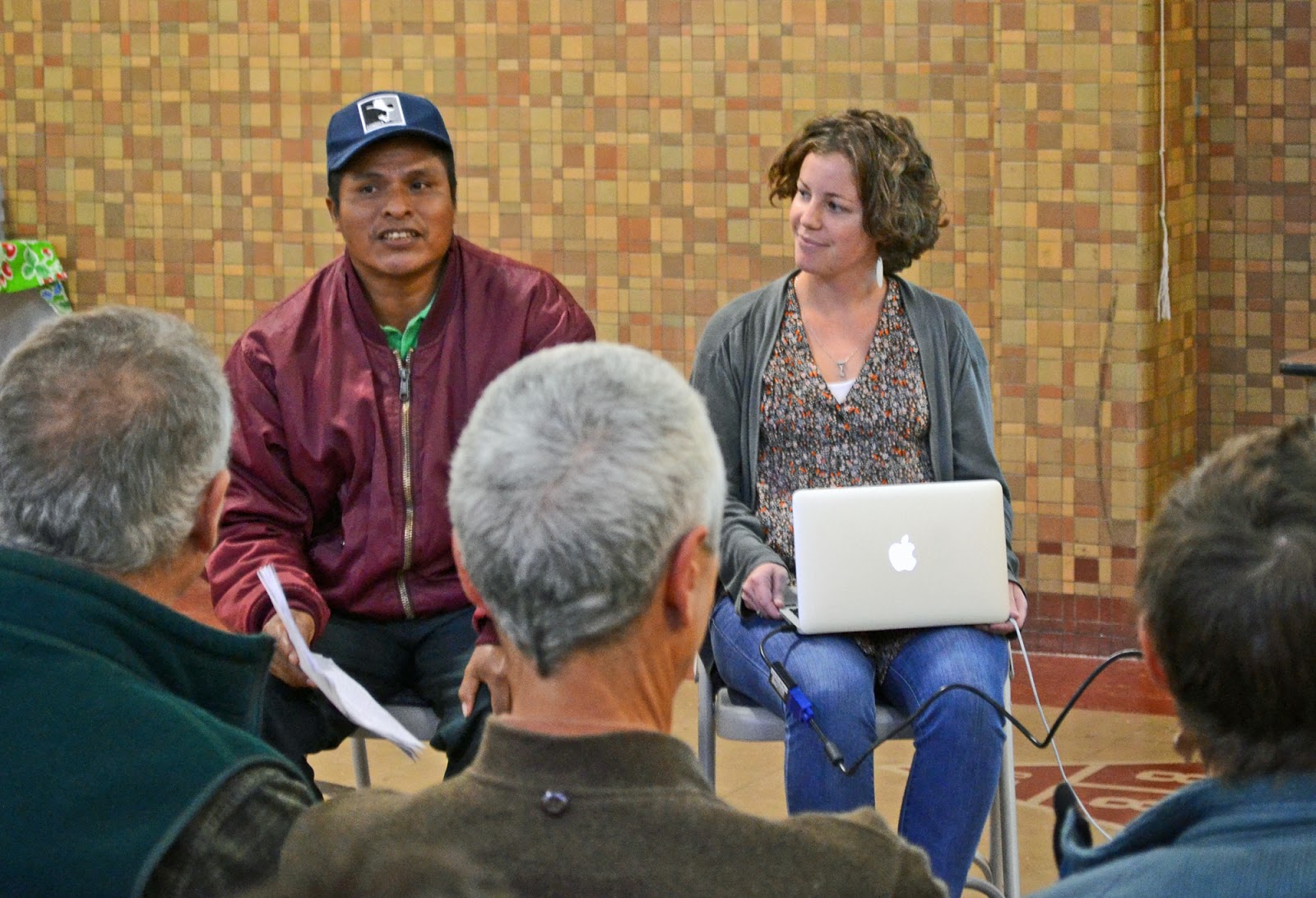 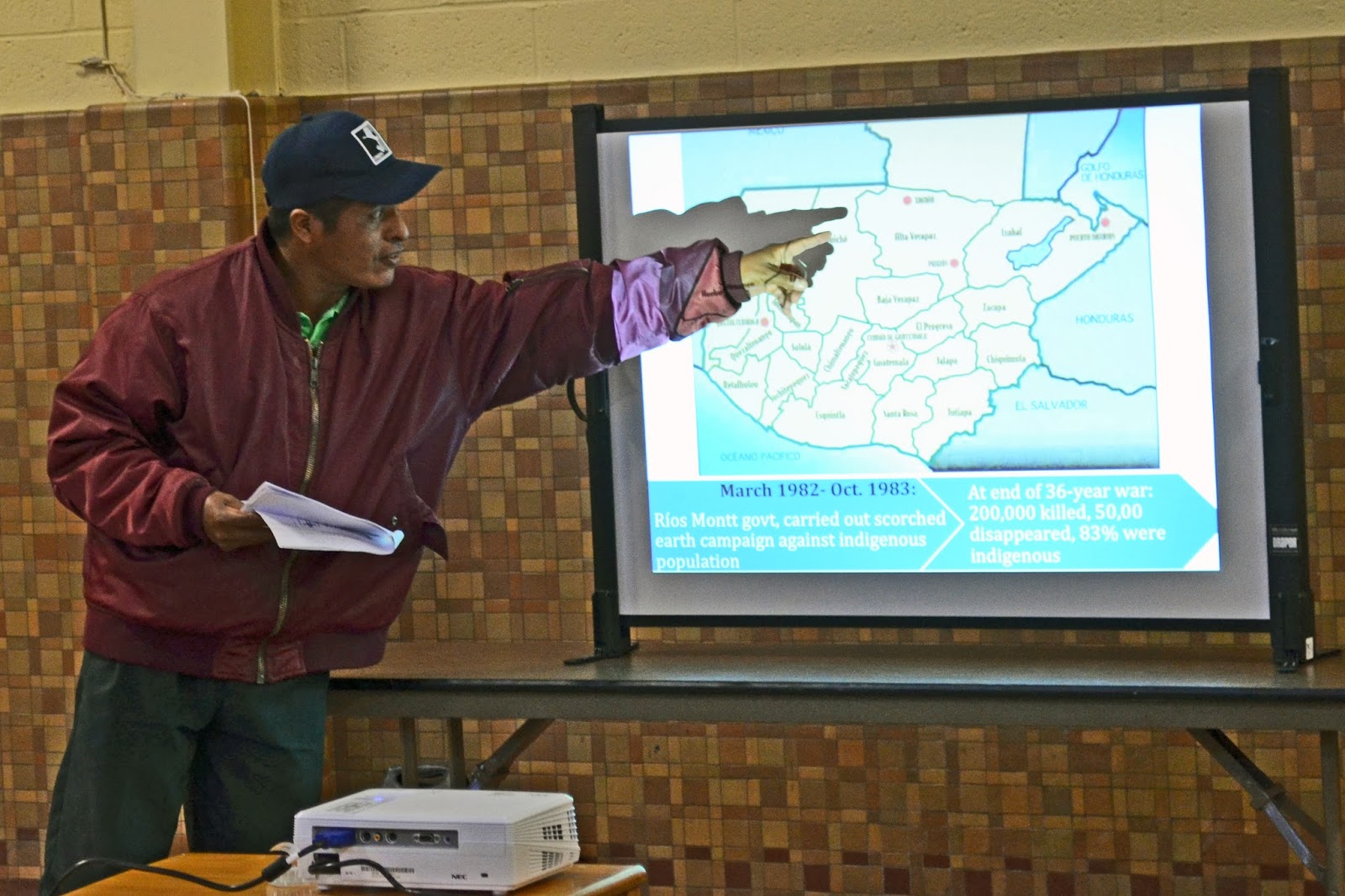 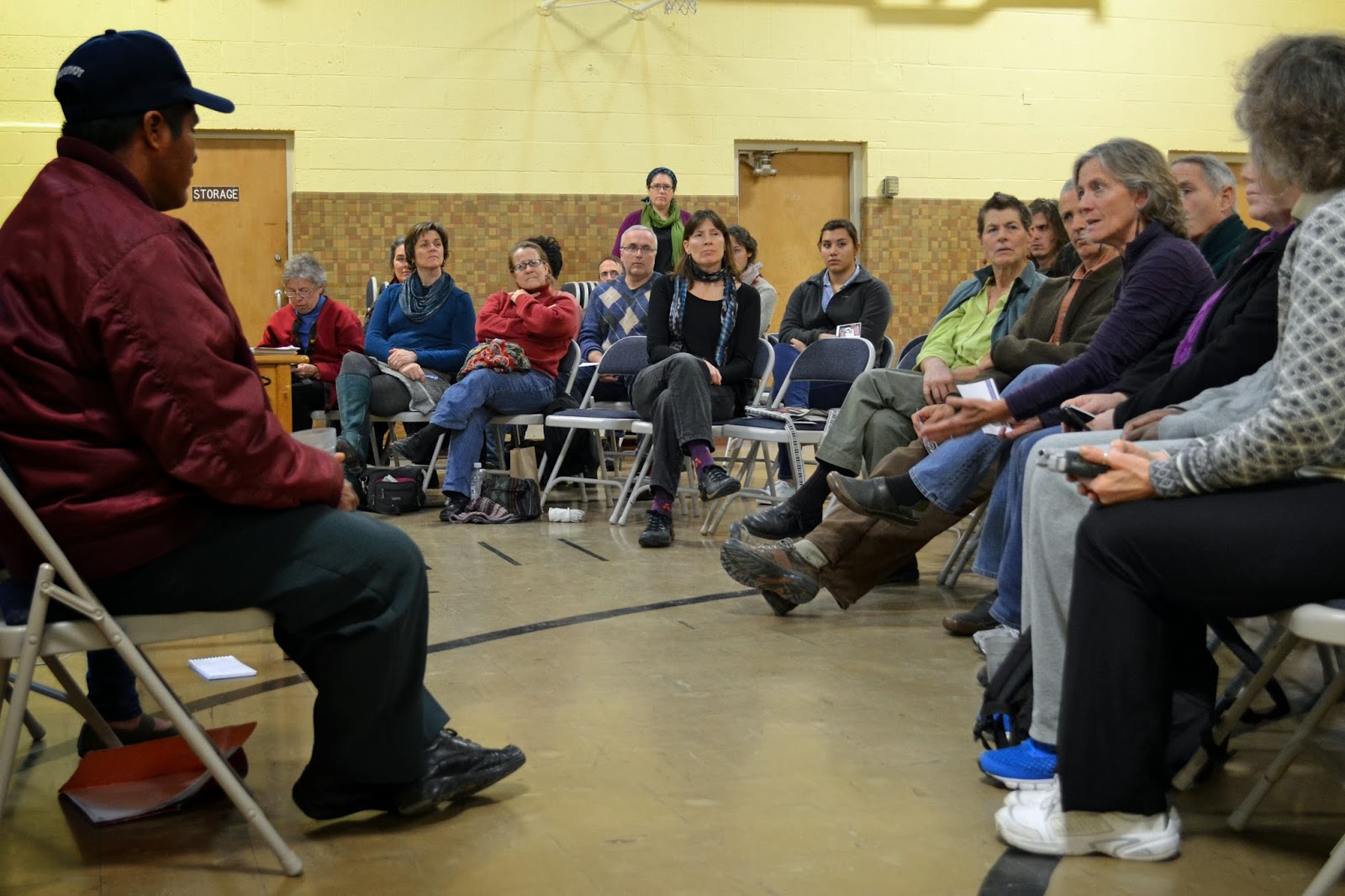 In Viroqua, WI, we joined longtime NISGUA supporter Connie Vanderhyden of the Kickapoo Guatemala Accompaniment Project (K/GAP) for a community event. Following Anselmo’s presentation, K/GAP hosted a meal in order to continue chatting and sharing. Some messages left by attendees for the AJR include:

Every perpetrator of genocide should know that it will not stand before the law. Your courage brings tears to my eyes. Keep telling your truths. We are behind you.

Without justice there will be no peace. La Lucha continua!

Accountability is part of the healing process. Impunity prevents healing. The voices of the Guatemalan people have spoken the truth. Their perseverance and courage are testament to their truth. Justice requires that the sentence stand.

For all the lives lost, and for the ongoing suffering of the survivors the sentence must stand. The world is watching. 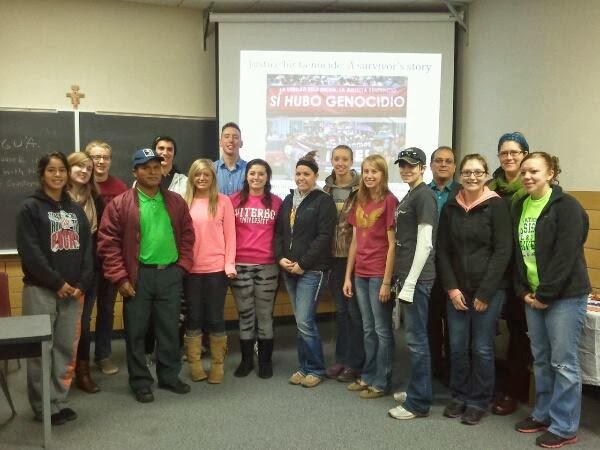 Anselmo connected with more Midwest students on his last day in Wisconsin at Viterbo University and University of Wisconsin – La Crosse. Students at both universities were captivated by Anselmo’s story and joined in our campaign with these powerful messages:

I support the sentence because nobody should be above the law. These communities deserve justice.

Its not about revenge, it’s about justice and everyone deserves justice.

The AJR is courageous for standing up for themselves and coming to the US to tell their story. Thank you for coming to talk to us, and don’t be discouraged.

Please share your own message of support for the historic genocide sentence and the brave survivors of the Association for Justice and Reconciliation and continue the call for NO AMNESTY and NO IMPUNITY for war criminals! Participate today!
Continue to follow the NISGUA tour! Read about our previous stops in Tucson, D.C. and Los Angeles. See what cities we’re headed to next by visiting our website.
nisgua_admin2017-12-08T21:38:22+00:00November 18th, 2013|Justice and accountability, Tour|